Over the past three decades, the incidence of thyroid cancer has increased threefold, whereas the papillary thyroid carcinoma (PTC) accounts for approximately 90% of thyroid cancer (1). Postoperative hypocalcemia and hypoparathyroidism are common complications in PTC operations due to parathyroid injury from devascularization, mechanical and thermal trauma, or resection of one or more parathyroid glands (2-5). Total thyroidectomy with central neck dissection increases the risk of postoperative hypoparathyroidism, especially with bilateral central neck dissection (6). It is reported the prevalence of transient hypocalcemia ranged from 19% to 38% (7), and the incidence of transient and permanent hypoparathyroidism were 51.9% and 16.2% after total thyroidectomy with bilateral central lymph node dissection, respectively (8).

Therefore, the aims of this study were to investigate the rule of parathyroid function after total thyroidectomy with bilateral central neck dissection in patients with three parathyroid glands and to ascertain whether autotransplantation affected the incidence of postoperative hypocalcemia, transient and permanent hypoparathyroidism, thereby providing evidence for the surgical strategy of patients with fewer parathyroid glands.

We present the following article in accordance with The Strengthening the Reporting of Observational Studies in Epidemiology (STROBE) reporting checklist (13) (available at http://dx.doi.org/10.21037/gs-20-486).

The study was conducted in accordance with the Declaration of Helsinki (as revised in 2013). The Institutional Review Board of West China Hospital (No. 2019-799) approved this retrospective study, and all patients provided informed consent to have their data recorded, analyzed, and published for research purposes.

Demographic data were collected upon admission. Levels of serum calcium and parathyroid hormone (PTH) were measured at 1-day, 1-month, 3-month, 6-month, 12-month follow-up. Patients were given prophylactically intravenous 4,000 mg calcium gluconate supplementation after operation. Then patients with normal calcium complained no discomfort were discharged on the 1st or 2nd postoperative day. Patients were followed up in the outpatient department.

If normally distributed, continuous variables were expressed as mean ± standard deviation and evaluated by the Student’s t-test and/or analysis of variance; if not normally distributed, variables were presented as median (interquartile range) and compared by U-test. The χ2 test or Fisher exact test was used to evaluate the differences of incidences. Based on the variables that were statistically significant or P value <0.10 in univariate analysis, multivariate analysis with logistic regression was conducted to identify the independent risk factors. The results of the multivariate analysis were reported as odds ratio (OR) with 95% confidence interval (CI). Two-sided P<0.05 was considered statistically significant. All statistical analyses were performed using IBM SPSS Statistics version 25.0 for Windows (IBM Corp., Armonk, NY). 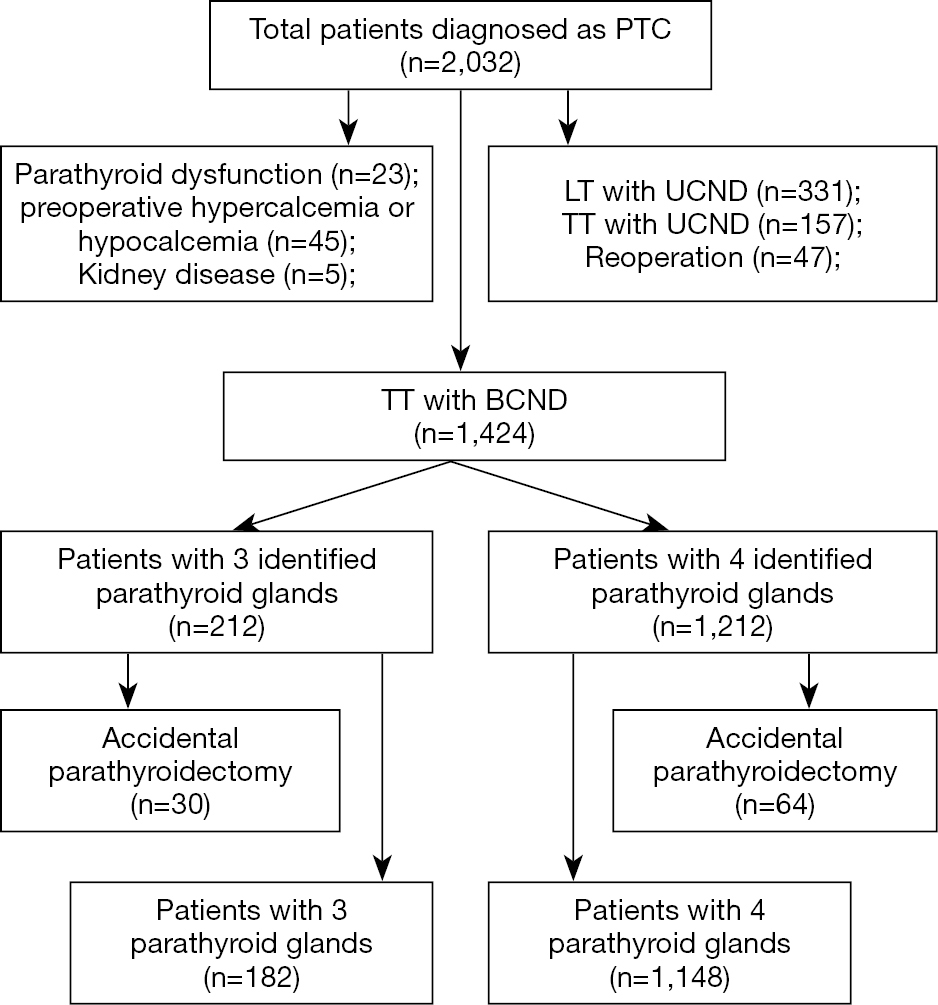 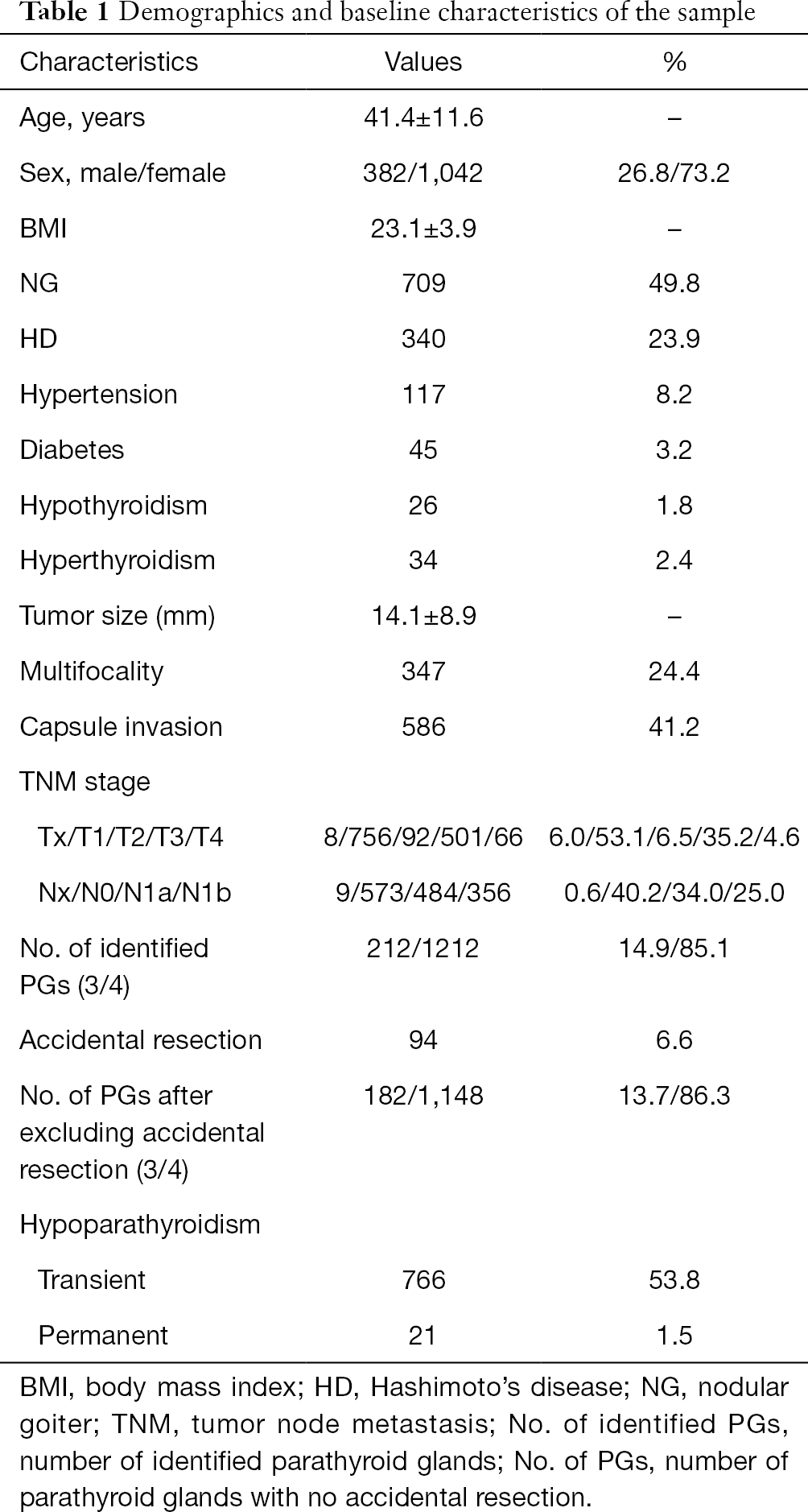 Table 1 Demographics and baseline characteristics of the sample
Full table 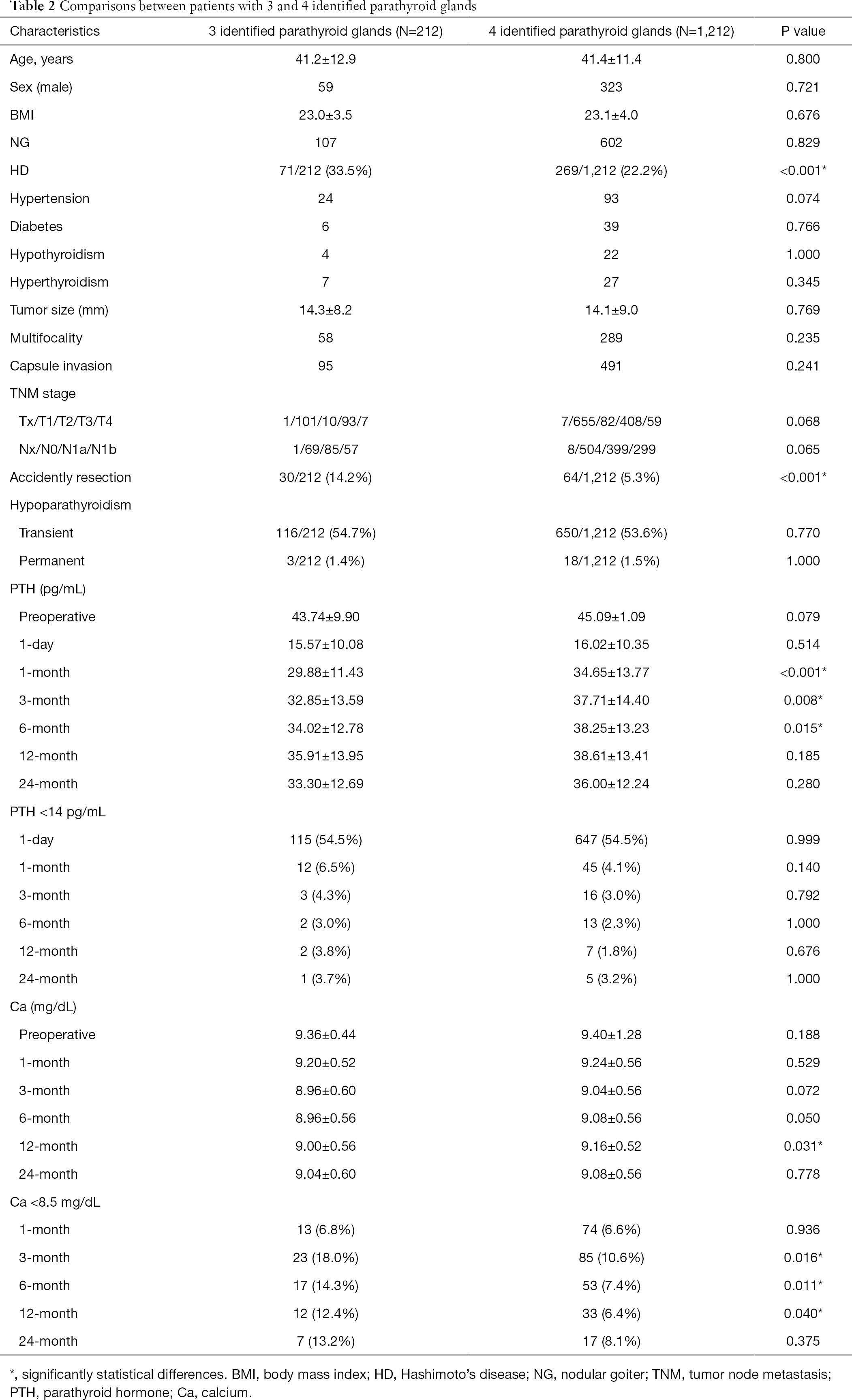 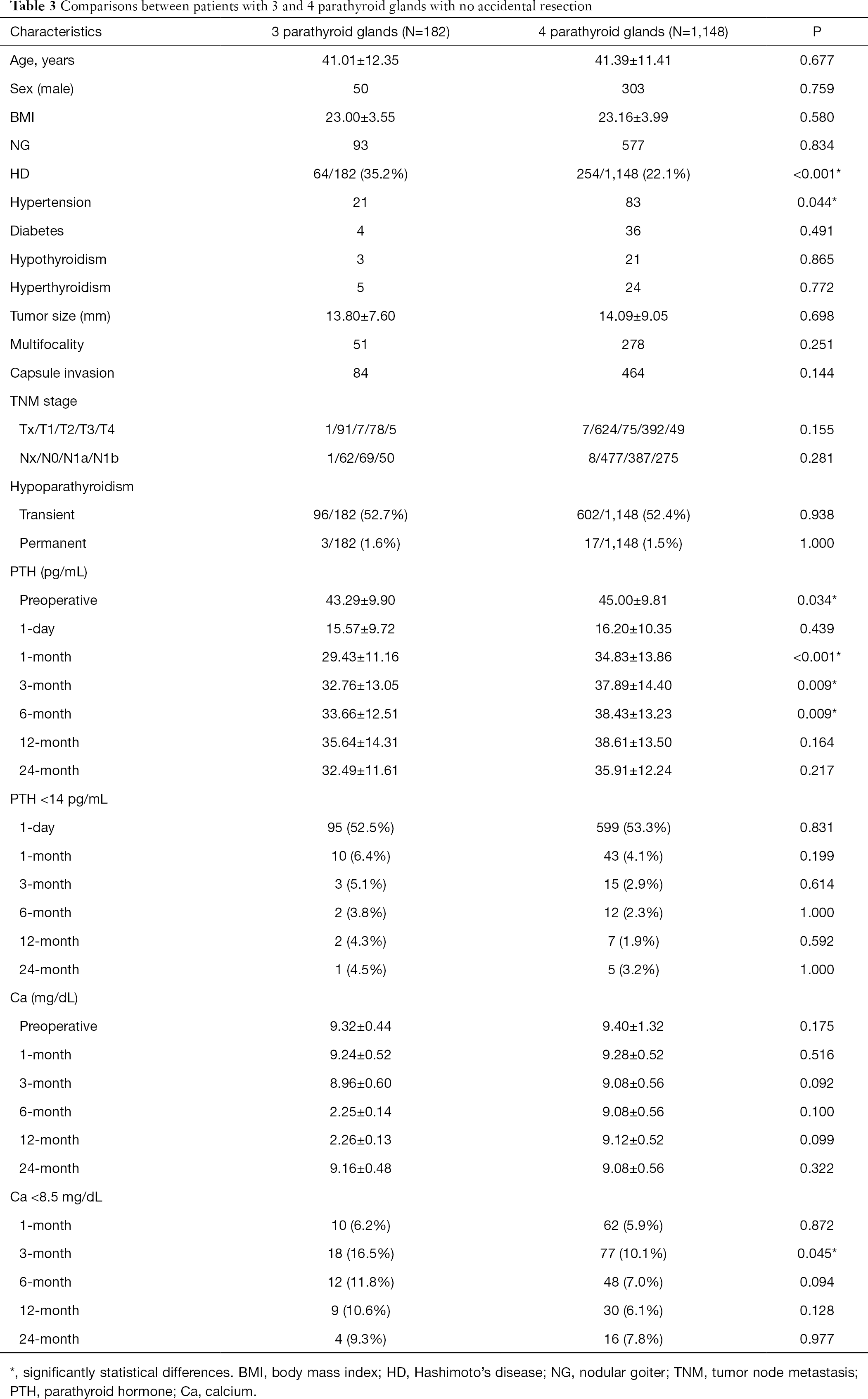 Comparisons between patients with 3 and 4 identified parathyroid glands

We compared the incidence of transient and permanent hypoparathyroidism, the serum PTH and calcium levels before the operation and after 2-year follow-up according to grouping by the number of parathyroid glands identified. The details were given in Table 2. No significant difference was found between these two groups in preoperative PTH (P=0.079) and calcium levels (P=0.188). These two groups had comparable rates of transient (P=0.770) and permanent hypoparathyroidism (P=1.000). 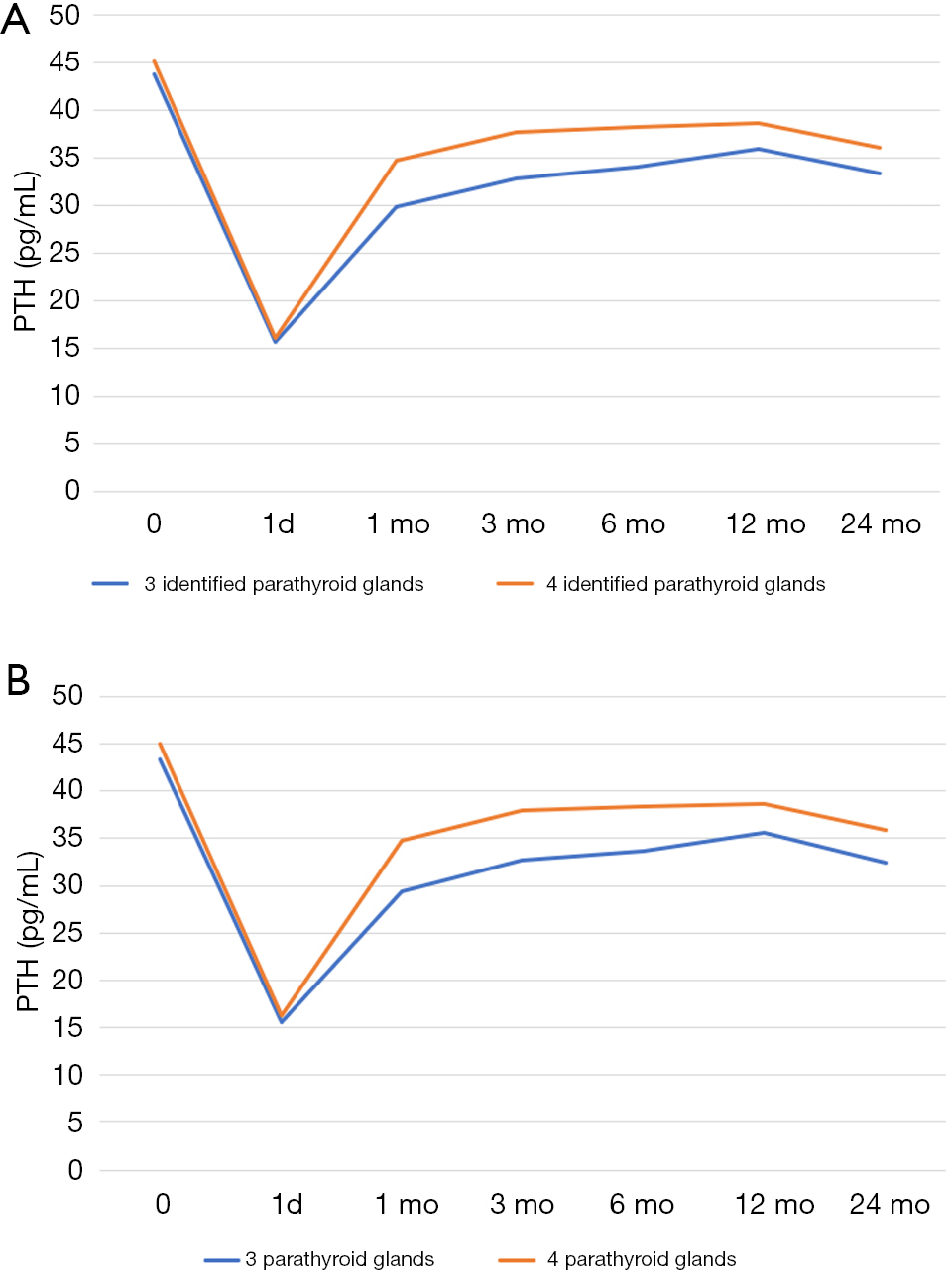 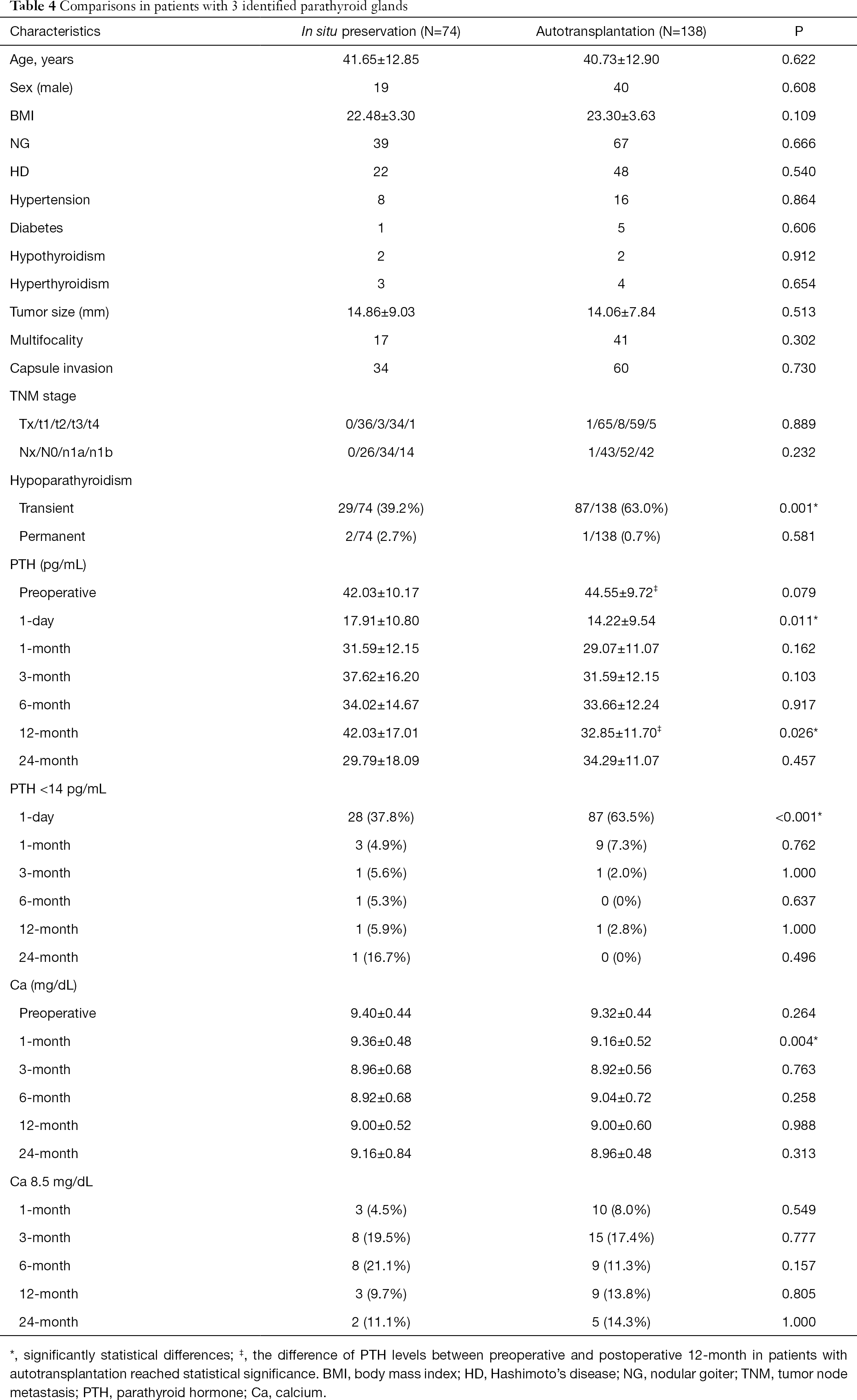 Hypocalcemia after total thyroidectomy is caused by a decrease in circulating PTH, which is result from a reduction of parathyroid parenchyma function (17,18). Some studies have reported that the fewer identified parathyroid glands at operation, the higher the risk of postoperative hypocalcemia and permanent hypoparathyroidism, which may result from accidental parathyroidectomy (2,19,20). This was not completely consistent with our results. Our present study demonstrated no correlation between 3 identified parathyroid glands and transient or permanent hypoparathyroidism. Due to potential disturbance of prophylactically calcium supplementation after operation, calcium levels at postoperative 1-day was not conducted. However, the levels of PTH and calcium were nearly lower and hypocalcemia trend was higher in patients with 3 identified parathyroid glands compared with patients with 4 at all follow-up stages, and some of them reached statistical difference.

There are some limitations in the present study. First, the data was retrieved retrospectively which might leaded to some bias. Second, there might be some missing description inevitably in the surgical records resulting in higher incidence of 4 parathyroid glands identification due to the doubt situation might be recorded as “all 4 glands were identified”. Third, although all the specimens removed would be systematically dissected in case of intra-thyroid parathyroid glands being unintentionally resected, possibility of unidentified or ectopic parathyroid were still present. The other limitation is the short follow-up time, resulting in the inability to observe more than 2-year parathyroid function.

Reporting Checklist: The authors have completed the STROBE reporting checklist. Available at http://dx.doi.org/10.21037/gs-20-486

Conflicts of Interest: All authors have completed the ICMJE uniform disclosure form (available at http://dx.doi.org/10.21037/gs-20-486). The authors have no conflicts of interest to declare.

Ethical Statement: The authors are accountable for all aspects of the work in ensuring that questions related to the accuracy or integrity of any part of the work are appropriately investigated and resolved. The study was conducted in accordance with the Declaration of Helsinki (as revised in 2013). The Institutional Review Board of West China Hospital (No. 2019-799) approved this retrospective study, and all patients provided informed consent to have their data recorded, analyzed, and published for research purposes.