Serum PTH measurements were used to predict post-thyroidectomy hypoparathyroidism or hypocalcaemia (7,8). The extent of serum PTH decline may be proportional to the degree of parathyroid gland (PTG) damage at the time points of PTH measurements. It is reasonable to assume that an extremely low or even undetectable PTH level after thyroidectomy may reflect the immediate severely damaged parathyroid function (SDPF) and may be able to predict a high risk of transient or permanent hypoparathyroidism. However, post-thyroidectomy recovery of extremely low PTH has not been completely defined.

Here we examined the recovery of severely damaged parathyroid function on postoperative day 1 (SDPF-D1). We also looked for possible factors influencing the recovery of SDPF-D1. We present the following article in accordance with the STROBE reporting checklist (available at http://dx.doi.org/10.21037/gs-20-548).

This is a retrospective review of patients with thyroid cancer confirmed by the final pathology from January 2017 to May 2019. All included patients underwent primary total thyroidectomy with or without prophylactic/therapeutic central neck dissection (CND). Those diagnosed with follicular thyroid carcinoma before and during surgery did not undergo prophylactic CND. Therapeutic lateral neck dissection was performed as clinically indicated. Exclusion criteria were preoperative hypocalcaemia, benign thyroid nodules, parathyroid disease, and a history of thyroidectomy or parathyroidectomy. All operations were performed by an experienced surgeon (H.L.) with a volume of more than 800 thyroidectomies per year.

The number of PTGs autotransplanted and found in the final pathology was recorded. We just recorded the number of PTGs “encountered” and preserved in situ during operation and did not deliberately expose all possible PTGs to avoid damage to the blood supply of PTGs. The Parathyroid Glands Remaining In Situ (PGRIS) score, which was introduced by Lorente-Poch et al. (9), was calculated using the formula: PGRIS = 4 – glands autotransplanted-lands found in the final pathology.

Total serum calcium and intact PTH levels were measured before surgery and on postoperative day 1 (POD 1) during hospitalization. The intact PTH assay was done by chemiluminescence immunoassay on DXI 800 Immunoassay System (Beckman Coulter, USA) (normal range 12–88 pg/mL). The limit of detection and limit of blank of PTH assay are both 1 pg/mL. The limit of quantification and functional sensitivity are both <4 pg/mL. The measurement of PTH concentration >1 pg/mL was achieved by the Regular Mode, while the measurement of PTH concentration <1 pg/mL was achieved through the equation derived from the relationship between the relative light unit and standard analyte concentration by the Intraoperative Mode on the DXI 800 Immunoassay System. However, these measurement results of serum PTH concentrations <1 pg/mL in the Intraoperative Mode were imprecise and not repeatable. Thyroid surgeons in our hospital would carefully interpret these results based on actual clinical scenarios. Total serum calcium was measured on the AU5800 analyzer (Beckman Coulter, USA) (normal range 2.20–2.65 mmol/L). Albumin corrected total calcium was not investigated because serum albumin was not routinely measured during follow-up. Calcium carbonate and calcitriol were started if PTH <12 pg/mL on POD 1. Patients with hypoparathyroidism came to the clinic at 2 months after discharge and then were instructed to receive regular follow-up every 2–3 months in the first year after surgery if needed. A calcium supplementation regimen was adjusted accordingly to prevent hypocalcaemia associated symptoms at every clinical visit. Patients were followed for at least 12 months.

The study was conducted in accordance with the Declaration of Helsinki (as revised in 2013).The study protocol was approved by the Ethics Committee of the first affiliated hospital of Nanjing Medical University (number of ethical approval: 2018-SR-209). Informed consent from patients was not needed because this was a retrospective research and all data about personal identifiers were kept confidential.

Patients who were lost to follow-up were not included in the final analyses. No formal sample size calculation was performed for this observational study. Continuous data are presented as mean ± standard deviation or the median with interquartile ranges dependent on whether the data were normally distributed or not (D’Agostino & Pearson omnibus normality test). Clinical parameters were compared using Student’s t-test or Mann Whitney U test for continuous data and using the chi-square test or Fisher’s exact test for categorical variables. The percent recovery of parathyroid function was analyzed using Kaplan-Meier survival curves and compared between groups using the Log-rank (Mantel-Cox) Test (GraphPad Prism 5). P values <0.05 were considered statistically significant.

A total of 949 patients underwent a primary total thyroidectomy due to thyroid cancer during the study interval. Three hundred and sixty-five of 949 (38.5%) patients suffered from hypoparathyroidism, of which 344 patients were included in the final analysis of this study after excluding those who were lost to follow-up. There were 25 patients with follicular thyroid carcinoma, 1 with medullary thyroid cancer and 318 with papillary thyroid carcinoma. One hundred and twenty-two patients suffered from SDPF-D1, of which 39 patients had an undetectable PTH (Figure 1). 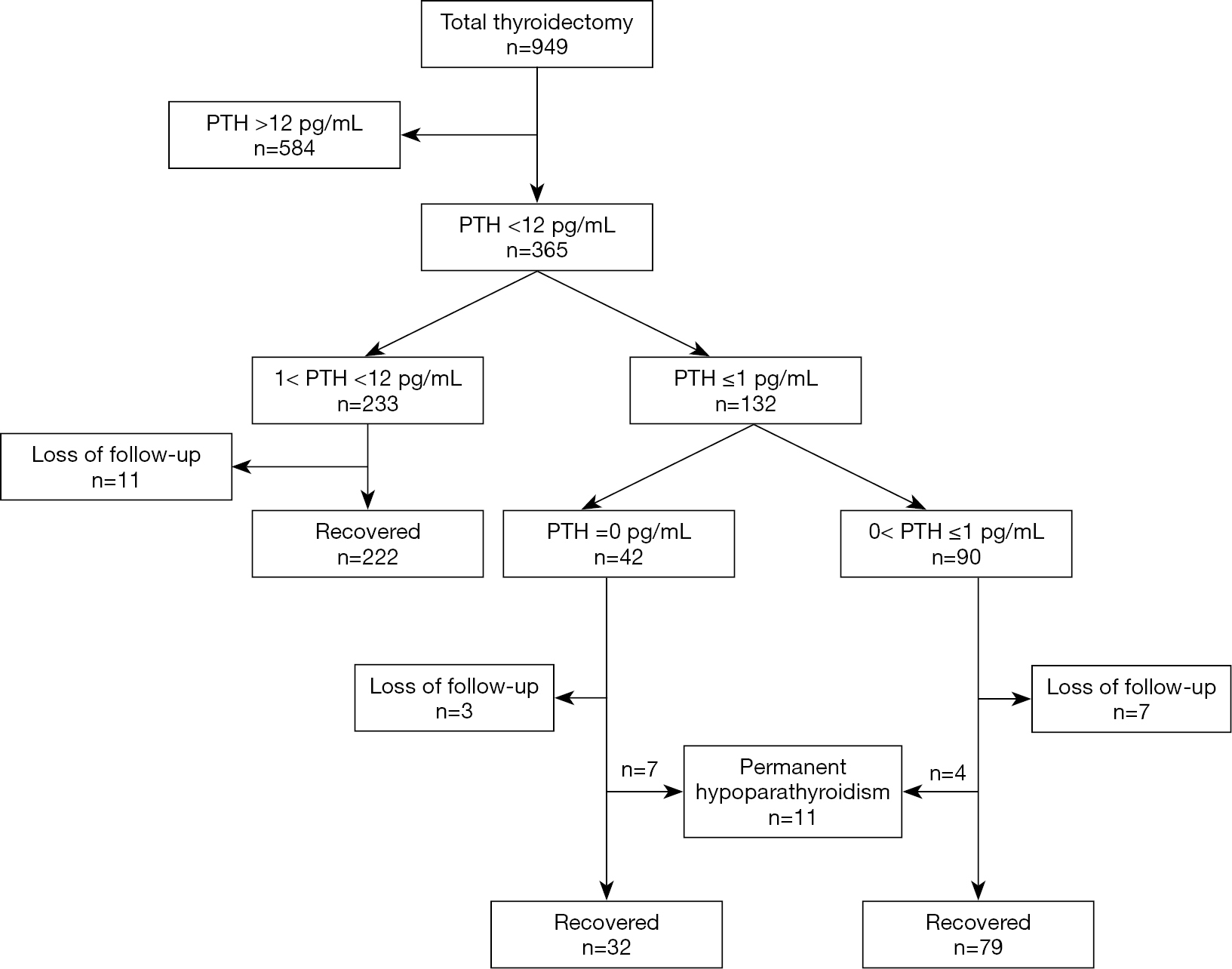 Figure 1 Flow chart of patients screened and included with 1 year after total thyroidectomy. Three hundred and forty-four out of 949 patients were finally included for analysis. PTH, parathyroid hormone.

Recovery of SDPF-D1 during the following 12 months after thyroidectomy 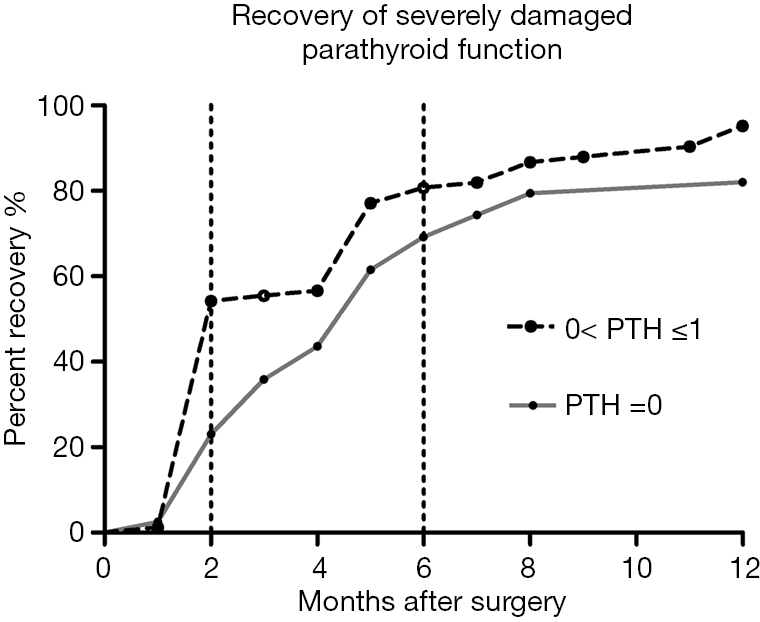 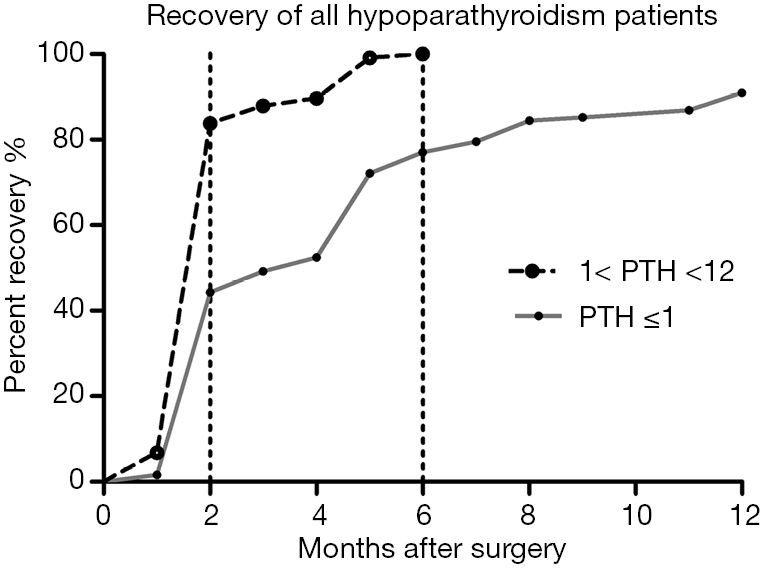 Clinical factors influencing the recovery of patients with SDPF-D1 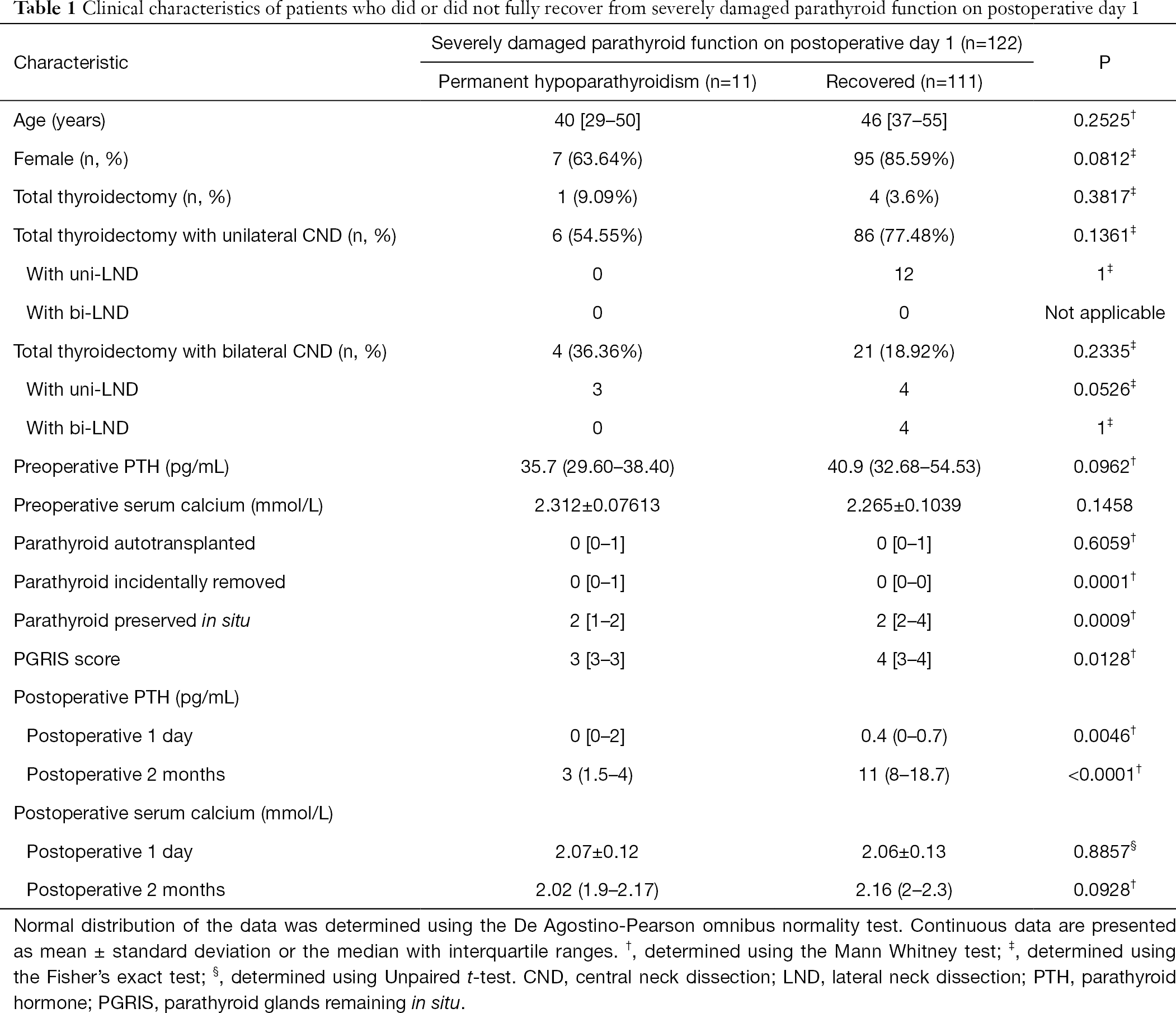 Clinical factors affecting the development of SDPF on POD 1 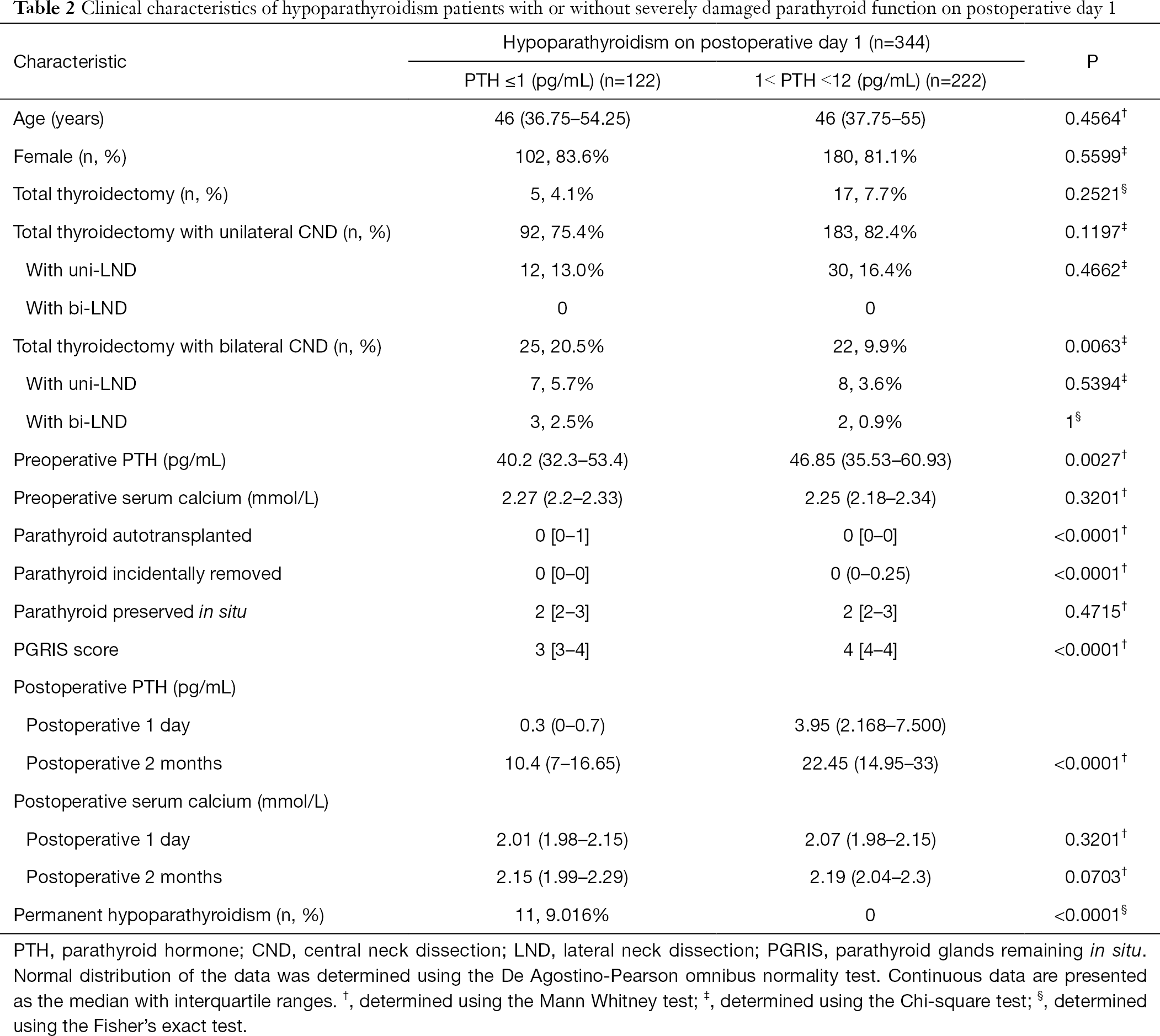 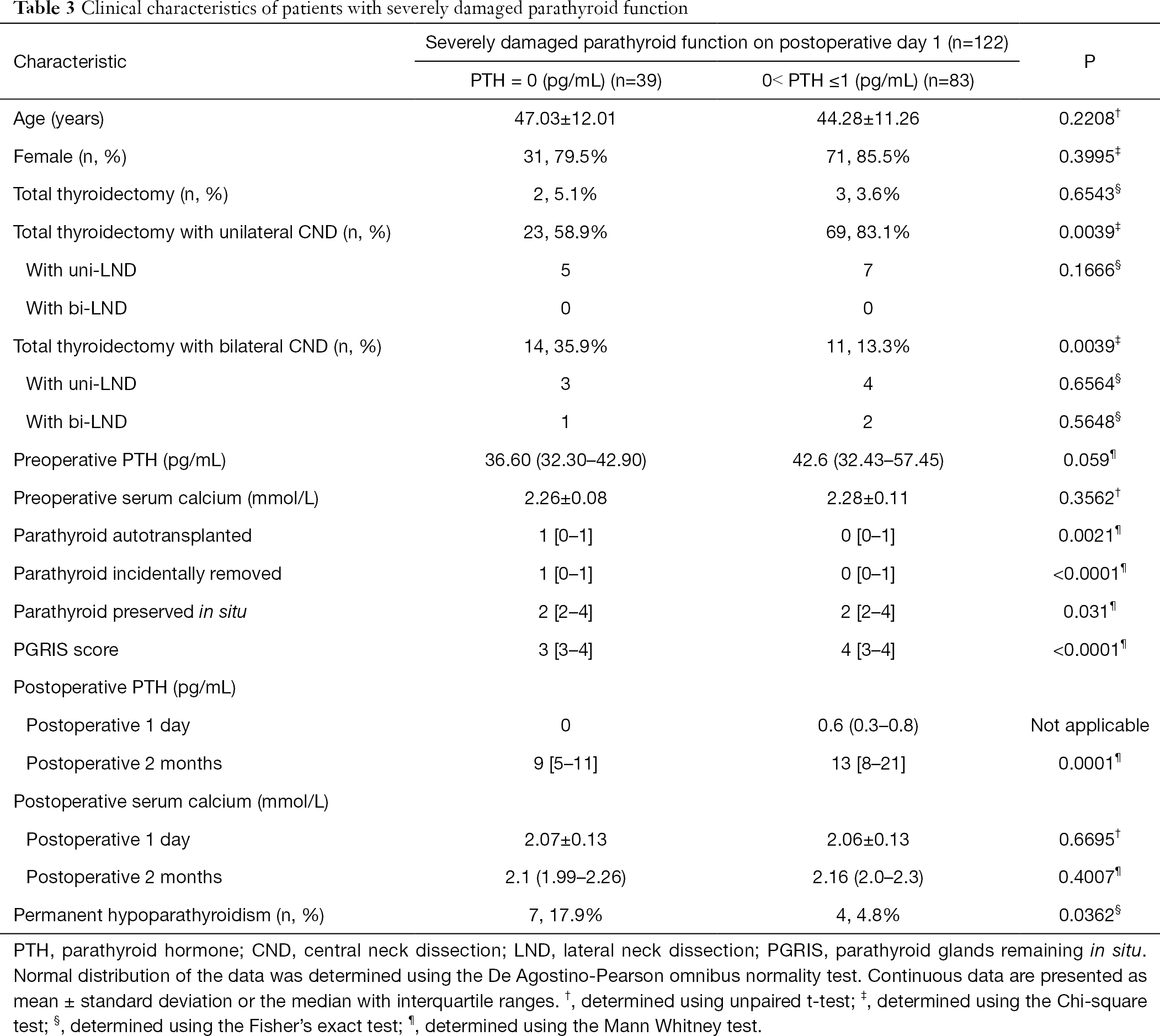 The current study indicated that though patients with SDPF-D1, especially those with undetectable PTH, had a high risk of prolonged recovery of parathyroid function, most of them (91%) still had a chance to fully recover within one year after total thyroidectomy.

Our results found that patients with undetectable PTH were more likely to develop protracted hypoparathyroidism at 2 months after surgery. However, most patients (82%) with undetectable PTH on POD 1 still dramatically fully recovered 1 year after surgery. A plausible explanation is that SDPF with or without undetectable PTH is some kind of “parathyroid shock” or stunning due to injured blood supply to PTG and/or the short half-life of PTH (10). Most parathyroid shock seemed to be reversible or corrected by compensatory hyperplasia of parathyroid parenchyma and/or recovery of the blood flow to PTGs (such as vasospasm, opening of preexisting collateral blood vessels or angiogenesis). The power of undetectable PTH on POD 1 to predict permanent hypoparathyroidism is limited in our study. The detection limit of serum intact PTH varies among laboratories due to different measuring instruments, methods and assay kits. The difference may lead to a cautious extrapolation of our results. Furthermore, the poor sensitivity and imprecision of the assay of serum PTH concentration <1 pg/mL in the current study still needs further discussion.

Different from other studies including patients with benign or malignant thyroid disease, or both (7,11,12), the current study included patients with thyroid cancer, of which 322 (93.6%) patients underwent total thyroidectomy with unilateral or bilateral CND. Our research found that total thyroidectomy with bilateral CND played an important role in the development of SDPF-D1 and undetectable PTH on POD 1. This might result from the increased risk to incidental removal of PTGs and disruption of the blood supply to PTGs during CND (13-16) as significantly increased PTGs autotransplanted and removed, and significantly low PGRIS score were detected in SDPF-D1 in the current study. However, the role of PTG autotransplantation or incidental parathyroidectomy alone in the development of severe or permanent hypoparathyroidism remains unclear in previous reports (2,7,16-20). The number of PTG preserved in situ in our study was not very accurate. It did not include all PTGs that remained in situ because we did not intentionally find all PTGs, some of which may have been hidden deeply or ectopic. Moreover, viability of PTGs preserved was not ascertained by definite evidence during surgery.

Here, a low PGRIS score seemed to be a good predictor of SDPF-D 1 and prolonged recovery of parathyroid function, which was in agreement with the previous report (9,12). The concept of PGRIS well integrated the three variables (PTGs autotransplanted, incidentally excised and preserved in situ) to one variable based on the assumption that everyone has at least four PTGs. Recently, a similar concept of PGRIF [PGRIF = number of in situ glands/(total number of identiﬁed glands − number of glands in the specimen)] introduced by Luo et al. (21) was also identified as a crucial predictor for post-thyroidectomy parathyroid function. The essence of a PGRIS or PGRIF score in these studies might be that more PTGs should be preserved in situ (9,21).

However, we cautiously conclude that a high PGRIS score in our study only meant less PTGs removed or autotransplanted, which contributed to a fast recovery of damaged parathyroid function. The experienced surgical team is essential to accurately identify and preserve PTGs in situ. The permanent hypoparathyroidism rate reported in this study was much lower than those reported in many reports (22,23). In the current study, all operations were performed by a very experienced thyroid surgeon (H.L.) with a high volume per year. This might partly account for the low permanent hypoparathyroidism rate reported in our study. Moreover, report bias was also one of the reasons. Many patients from distant areas, who might have permanent hypoparathyroidism, did not adhere to follow-up and were not included in the current study.

Our research was limited by the small sample of patients with SDPF-D1 and its retrospective nature, which heavily relied on electronic medical records. The initial purpose of the current study was to investigate the time-related changes of undetectable PTH on POD 1, which was regarded as SDPF. However, only a very small number of these patents were included. To further expand the sample size, we used the cutoff value of 1 pg/mL as criteria of SDPF based on our experience and the suggestion from the laboratory staff that PTH ≤1 pg/mL (i.e., about ≤0.11 pmol/L) is almost undetectable using the current measurement. Different endocrine centers should find the center-specific cutoff values for SDPF or undetectable PTH to guide their decision-making.

Most patients with SDPF-D1 could fully recover within one year after surgery. Less PTGs accidentally removed and autotransplanted contributed to the fast recovery of SDPF-D1 after total thyroidectomy.

Reporting Checklist: The authors have completed the STROBE reporting checklist. Available at http://dx.doi.org/10.21037/gs-20-548

Conflicts of Interest: All authors have completed the ICMJE uniform disclosure form (available at http://dx.doi.org/10.21037/gs-20-548). The authors have no conflicts of interest to declare.

Ethical Statement: The authors are accountable for all aspects of the work in ensuring that questions related to the accuracy or integrity of any part of the work are appropriately investigated and resolved. The study was conducted in accordance with the Declaration of Helsinki (as revised in 2013). The study protocol was approved by the Ethics Committee of the first affiliated hospital of Nanjing Medical University (number of ethical approval: 2018-SR-209). Informed consent was not required since this was a retrospective study and all data with personal identifiers were kept confidential.