We analyzed all of the surgical procedures performed from April 2015 to March 2019 for the biochemical diagnosis of PHPT based on the confirmation of a single parathyroid adenoma on imaging at Mita Hospital (Tokyo), of the International University of Health and Welfare. The medical records of these patients were reviewed after approval by the Institutional Ethics Board of Mita Hospital (No. 5-20-06: the registration number of ethics board) and the approach of opt-out consent was used for this retrospective analysis. The study was conducted in accordance with the Declaration of Helsinki (as revised in 2013). During that 4-year period, 37 patients underwent a parathyroidectomy for PHPT at Mita Hospital. We excluded patients if bilateral neck exploration was planned preoperatively for them. Patients who were diagnosed as having more than one adenoma before surgery or who underwent the thoracoscopic approach for an ectopic parathyroid adenoma were also excluded. A final total of 28 patients were enrolled in this study. These patients were scheduled to undergo MIP and were informed of the benefits and disadvantages of both surgical methods (i.e., TEP and OMIP).

TEP was performed as described (9,10). In brief, a 20- to 30-mm incision is made in the axilla (an axillary approach) or the anterior chest (an anterior chest approach). After inﬂation of the balloon under the platysma muscle, a surgical glove with 5-mm trocars on the first and fifth fingers is fixed to the outer ring of a wound retractor inserted through the skin incision. Carbon dioxide (CO2) is insuﬄated to 6 mmHg. An additional 5-mm trocar is inserted near the incision. The anterior border of the sternocleidomastoid muscle is dissected from the sternohyoid muscle. After the parathyroid tumor is identified, it is removed using endoscopic scissors or an ultrasonic scalpel (Figure 1). A partial thyroidectomy was usually performed when the parathyroid tumor was partially embedded in the thyroid or when the parathyroid tumor had irregular margins. 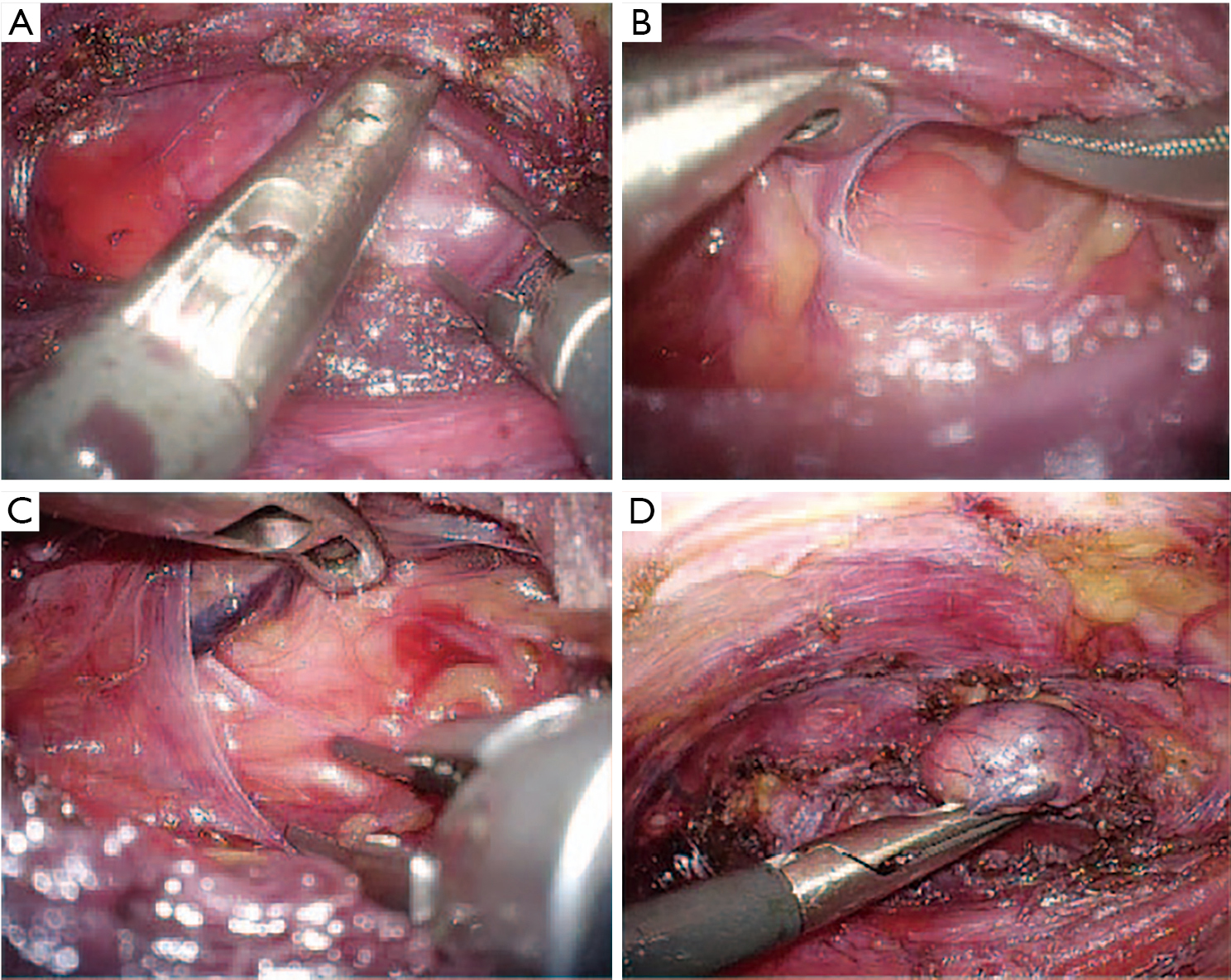 All of the baseline characteristics of the TEP and OMIP groups were similar (Table 1). The TEP group was 10 females and one male, with a mean age of 54.2 years. The OMIP group was 11 females and six males, with a mean age of 63.5 years. The younger patients and the women tended to select endoscopic surgery as their treatment, although there was no significant difference in age or sex distribution between the TEP and OMIP groups. There were no significant differences between the two groups in body mass index (BMI), the largest diameter of the lesion, the preoperative albumin-corrected calcium and intact PTH levels, the rate at which the finding obtained by at least one of three imaging methods (US, CT, or MIBI) was negative, or renal and skeletal comorbidities (which are highly associated with PHPT). 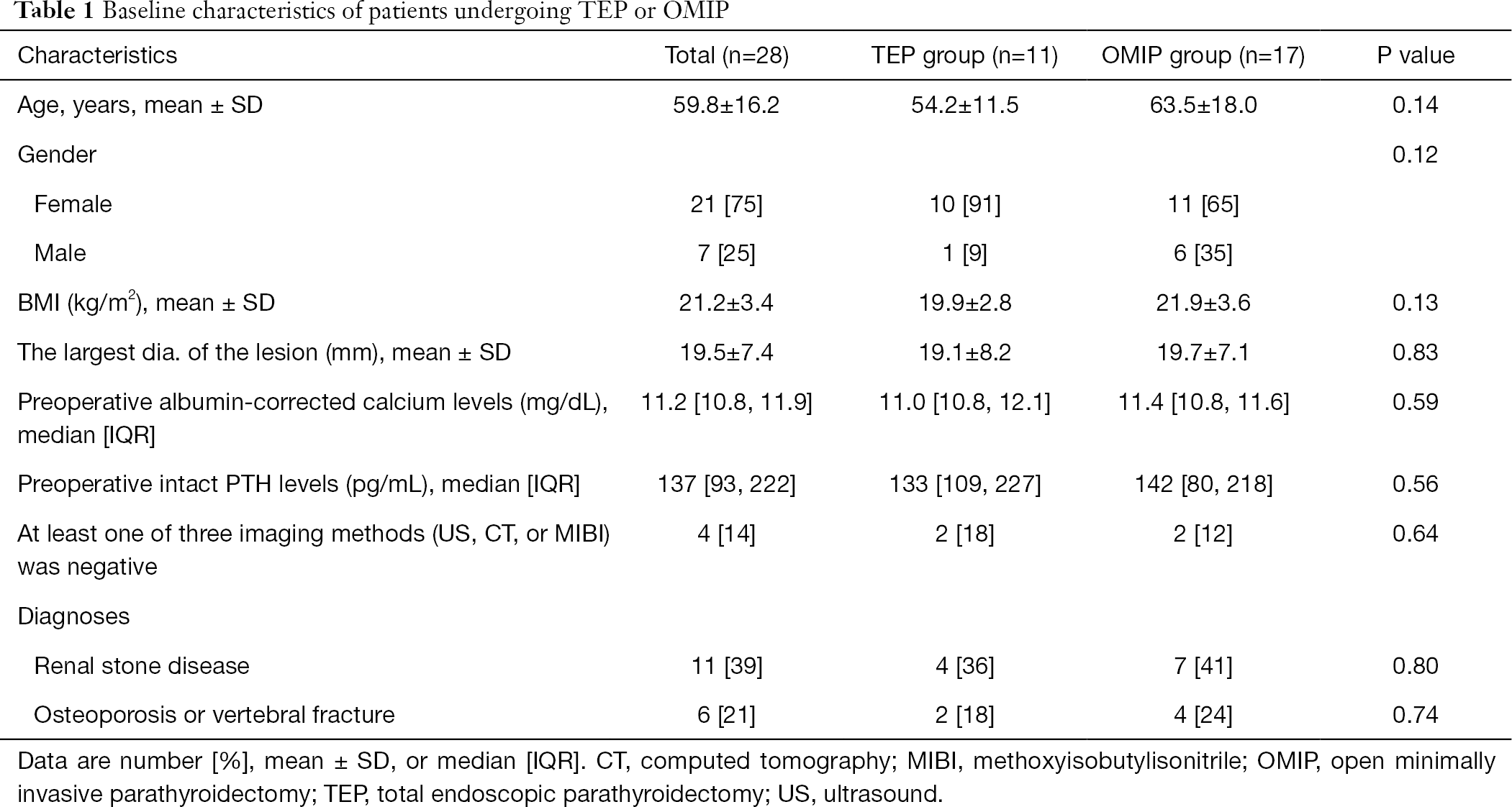 We next compared the surgical outcomes between the TEP and OMIP groups (Table 2). The operation time was significantly longer in the TEP group compared to the OMIP group [median 106 for interquartile range (IQR) 68–116 min vs. median 50 for IQR 38–71 min; P<0.001]. There were no significant differences between the two groups in terms of the amount of bleeding, the use of a partial thyroidectomy together with a parathyroidectomy, the postoperative length of hospital stay, the postoperative intact parathyroid hormone (PTH) level, or the pathological diagnosis. Common postoperative complications (e.g., recurrent laryngeal nerve paralysis and seroma) did not occur in this patient series. 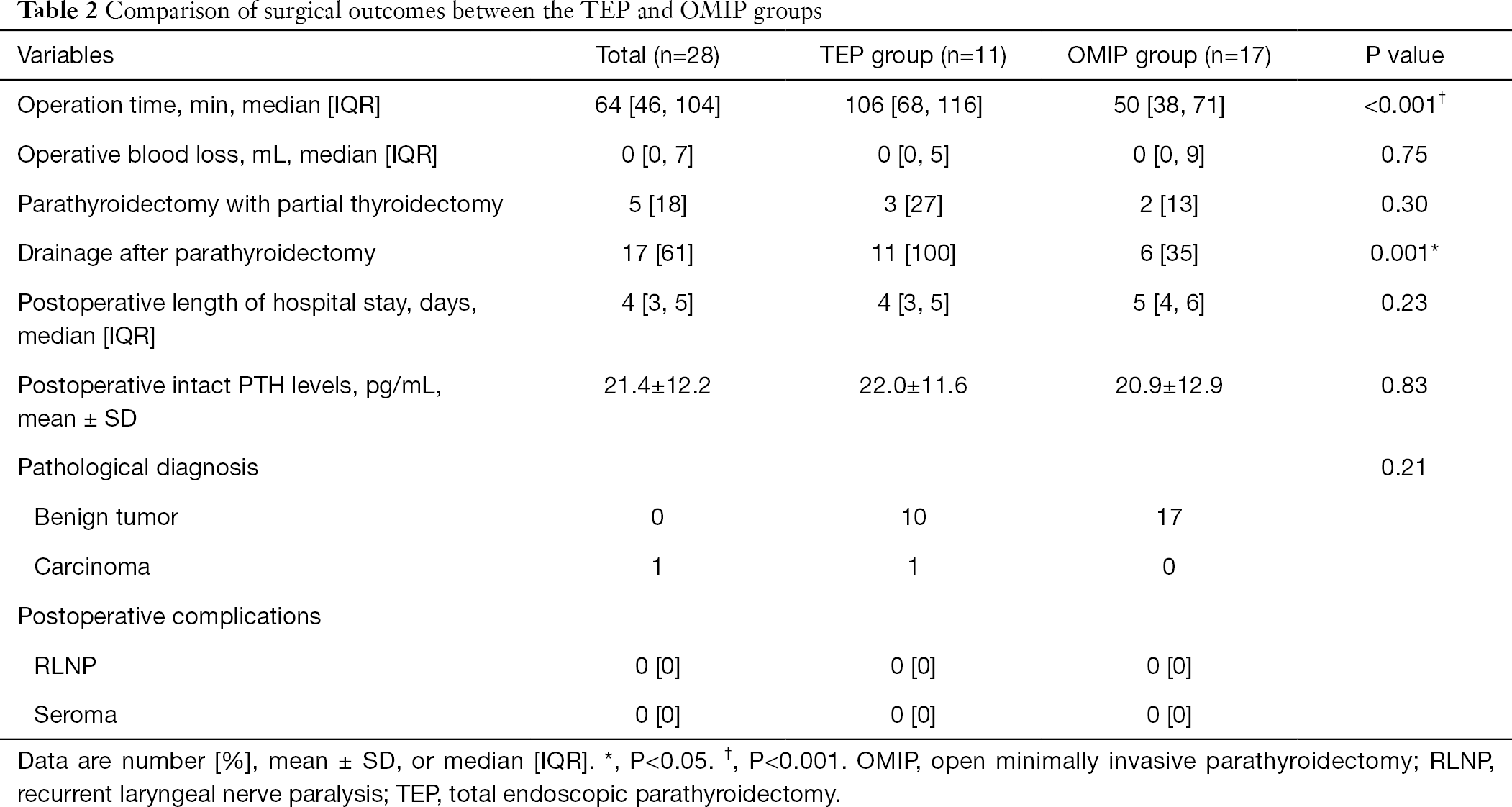 The rate of drainage after parathyroidectomy was significantly higher in the TEP group (100% vs. 35%; P<0.001). In the TEP group, all 11 patients had a drain placed at the time of the procedure for the prevention of postoperative seroma and the reduction of subcutaneous emphysema. The mean amount of drainage on the first postoperative day for the patients who underwent a TEP without a partial thyroidectomy was 19±10 mL, compared to 43±12 mL for the patients who underwent a TEP with a partial thyroidectomy (P=0.009).

In this series, the operative cure rate of MIP was 96.4%. All 11 patients in the TEP group were cured with a focused single parathyroidectomy, whereas the intact PTH level of one patient in the OMIP group did not decrease appropriately, and another adenoma was detected on the same side (double adenoma).

TEP was first reported by Gagner et al. in 1996 (11,12), and at that time a TEP was not remote-access surgery. The initial technique was carried out under constant gas insufflation, using four trocars inserted into the cervical space. This central cervical-approach TEP was capable of bilateral cervical exploration but has not been widely adopted due to its technical difficulty (12,13). This initial approach has therefore been replaced with the two main surgical methods, i.e., VAP with a cervical approach and a remote-access parathyroidectomy. In 2000, our group reported remote-access TEP (9), and that report was thought to be the first case describing a remote-access parathyroidectomy without the presence of a neck scar (14).

An MIP is an excellent surgical technique for patients with a detectable single parathyroid tumor. With the use of intraoperative PTH monitoring and the improvement of the preoperative imaging diagnosis of an abnormal parathyroid gland, the cure rate in PHPT patients who have undergone an MIP has reached 97–99% (3,15). However, Sugino et al. reported that 4% of their patients who underwent an MIP had double adenomas (15). In our present series, one patient (3.6%) had double adenomas. Therefore, even when the preoperative diagnosis is a single parathyroid adenoma, it is necessary to consider the conversion of an MIP to a unilateral or bilateral cervical exploration.

Because a remote-access TEP is performed in a relatively large subcutaneous space, a TEP provides a better visual field than an OMIP with its small incision. With a TEP, unilateral cervical exploration is possible with a good field of vision and no additional scar. It is also possible to perform the bilateral cervical exploration by the TEP technique, but additional ports on the contralateral side are necessary (16,17).

Figure 2 In light of the results of the present analyses, we began to abandon the use of drains in some cases. (A) X-ray before extubation. The subcutaneous emphysema produced by the TEP mostly faded away after the skin flap is pushed backward out of the skin incision. (B) The subcutaneous emphysema resolved in the postoperative period. TEP, total endoscopic parathyroidectomy.

Seroma is one of the complications associated with remote-access thyroidectomy (19). The formation of a postoperative seroma and the volume of drainage were both greater in a previous study’s remote-access thyroidectomy group than in the conventional open thyroidectomy group, and those results were thought to be due to the wider dissection area (including anterior chest wall) used to reach the thyroid gland (20). Regarding the remote-access parathyroidectomy, a few cases of seroma after remote-access parathyroidectomy have been reported (21,22), but they were successfully managed conservatively. In our present series, there was no patient who had a seroma after TEP, and the amounts of drainage were small in the patients who underwent a TEP without a partial thyroidectomy. Therefore, making the skin flat in the anterior chest wall might not be directly associated with the development of a postoperative seroma or the volume of drainage. The routine use of a drain did not seem to be necessary for the present TEP cases with limited exploration, because there was very little chance of those complications occurring.

Despite our encouraging results, there are some limitations to our study. This retrospective analysis may have confounding and selection biases, and the small patient population (n=28) may have affected our conclusions. Prospective trials of larger numbers of patients are needed to validate our findings.

The risks and significance of a remote-access endoscopic parathyroidectomy have not been established, but our present analyses demonstrated that a TEP was a good surgical procedure for hyperparathyroidism caused by a single adenoma, and the TEPs that we examined achieved superior cosmetic results and did not increase the rate of complications. Clinicians should consider the choice of TEP carefully for PHPT patients for whom bilateral cervical exploration may be necessary. Focused and unilateral cervical exploration can be performed easily with the TEP technique. More evidence about TEP must be accumulated before clinical guidelines regarding the effective and safe performance of a remote-access parathyroidectomy can be established.

Reporting Checklist: The authors have completed the STROBE reporting checklist. Available at http://dx.doi.org/10.21037/gs-20-526

Conflicts of Interest: All authors have completed the ICMJE uniform disclosure form (available at http://dx.doi.org/10.21037/gs-20-526). The authors have no conflicts of interest to declare.

Ethical Statement: The authors are accountable for all aspects of the work in ensuring that questions related to the accuracy or integrity of any part of the work are appropriately investigated and resolved. The study was conducted in accordance with the Declaration of Helsinki (as revised in 2013). The study was approved by the Institutional Ethics Board of Mita Hospital (Tokyo) (No. 5-20-06: the registration number of ethics board) and the approach of opt-out consent was used for this retrospective analysis.