In the differential diagnosis of neck masses congenital, inflammatory, toxic, tumoral, endocrine and systemic causes can be thought. Slow growing, not firmly adhesive to neighbouring tissue masses are mostly benign, whereas malignancy risk increases with age (4). Although primary and metastatic lesions of parotid and submandibular gland can manifest as a neck mass; pleomorphic adenoma or whartin tumors of ectopic salivary gland in the neck region are also encountered (5-8). According to our knowledge; CEPA originating from ectopic salivary gland in the neck region has not been published yet. In this case report we presented the first case of CEPA originating from neck region mimicking benign neck mass in a 72-year-old female patient.

A 72-year-old otherwise healthy female patient admitted to Mersin University otorhinolaryngology department with the complaint of neck mass. The mass was present for 35 years and it was growing slowly, she had no pain complaint. In her medical history, she had no surgery from salivary glands or neck region. In her physical examination, there was a tender on palpation, 7.5 cm mass starting from right submandibular region extending to level 3 and 4 (Figure 1). The mass was mobile on palpation. There was no facial weakness in examination. Examination of oral cavity, oropharynx, indirect endoscopic view of nasopharynx and larynx showed no pathology. In the magnetic resonance imaging (MRI) of the neck, she had a 7.5 cm × 5 cm solid mass extending from submandibular triangle to inferior neck region. The submandibular gland was pushed anteriorly by the mass, but there was a clear boundary between the mass and right submandibular gland (Figure 2). Ultrasound guided fine needle aspiration biopsy of the patient was non-diagnostic, so neck exploration was planned under general anesthesia. Intraoperatively, encapsulated solid mass was totally excised (Figure 3). For excluding malignancy, intraoperatively frozen section was performed. Since result of frozen section analysis was pleomorphic adenoma, right submandibular gland was also included in the surgical specimen. Histopathological examination revealed an intracapsular malign tumor composed of both myoepithelial and epithelial components in a lobular pattern close to normal parotid gland (Figure 4). In addition, the tumor also showed areas of pleomorphic adenoma in the form of admixture of epithelial and stromal elements (Figure 5). The epithelial component was of glandular nature (Figure 6). The tumor includes atypical spindle cells with hyalinized areas (Figure 7). There was no necrosis or lymphovascular and perineural invasion. Immunohistochemistry was positive for smooth muscle antigen (SMA) in myoepithelial area (Figure 8) and epithelial area for cytokeratin (Figure 9). Final histopathological diagnosis was intracapsular epithelial-myoepithelial CEPA. Right submandibular gland had normal morphology pathologically. Since the right submandibular gland was normal and there was a clear boundary between the mass and submandibular gland, intracapsular CEPA was accepted to originate from the ectopic salivary gland tissue in the neck. The tumor was intracapsular form, so neck dissection was not performed; she had no recurrences or another complaint for 1 year follow-up. 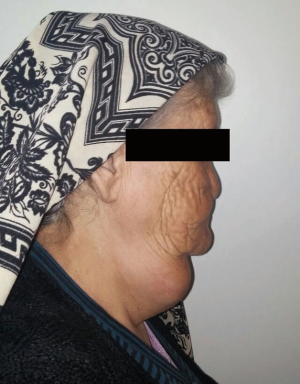 Figure 1 Preoperative appearance of the patient was seen. 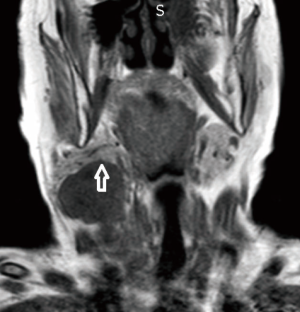 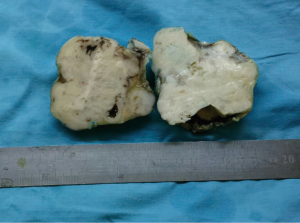 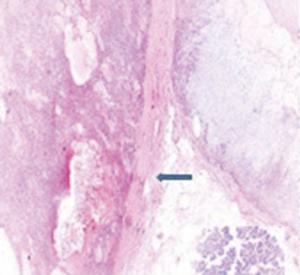 Figure 4 Intracapsular malign tumor consisting of both myoepithelial and epithelial components was seen (×100). 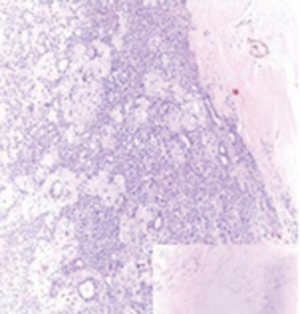 Figure 5 The areas of pleomorphic adenoma in the form of admixture of epithelial and chondromyxoid stromal elements were shown (×100). 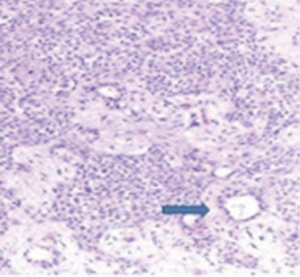 Figure 6 Epithelial component of the tumor was glandular in nature (×100). 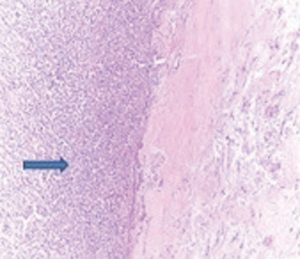 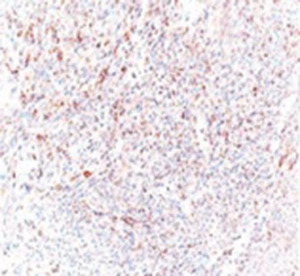 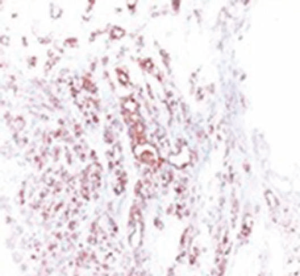 Salivary gland tumors are rare tumors affecting every 0.4-2.5 patients among 100,000 people each year. A total of 80% are seen in parotid gland and 80% are benign. Pleomorphic adenoma is the most common benign tumor with a mean 67.5% incidence (9). CEPA is the rare malign salivary gland tumor, originating from long lasting or recurrent pleomorphic adenoma (2). It accounts 11.6% of all malignant salivary gland tumors (10). Malignant transformation risk for benign pleomorphic adenoma is 3-15%; increases with time duration after first benign tumor is diagnosed and the size of the tumor (9). In our case; increased size of the tumor as 7.5 cm in long diameter and 35 years long lasting tumor after the first mass was recognized may be the risk factors for malignant transformation. Although exact malignant transformation steps in which pleomorphic adenoma turns into carcinoma is not known; firstly neoplastic luminal cells are thought to be replaced by carcinoma cells. In this stage tumor is surrounded by myoepithelial cells of pleomorphic adenoma called as ‘in situ CEPA’. In the next stage; tumor cells invade beyond the surrounding myoepithelial cells to neighboring stroma, but they are still encapsulated with the capsule of pleomorphic adenoma. This stage is called as ‘intracapsular CEPA’. If invasion continues beyond the fibrous capsule of the pleomorphic adenoma; the diagnosis is invasive CEPA. According to World Health Organization data: if invasion beyond the capsule is limited to 1.5 mm, then it is minimally invasive; if extends beyond 1.5 mm, it is frankly invasive (2,11).

For managing adult patients with neck mass, site of the mass, consistency during palpation, relationship with the neighboring tissue, age of the patient and additional illnesses are important factors. In the differential diagnosis; CITTENS (C-congenital, I-inflammatory, T-toxic, T-traumatic, E-endocrine, N-neoplasms, S-systemic reasons) must be thought (4). In the pediatric population, inflammatory masses are dominant, whereas masses over 40 years of age are much more likely to be neoplastic. Mobile and well-circumscribed masses are mostly thought to be benign in nature (4). In our patient, slowly growing, mobile and well-circumscribed properties of the mass were suggestive of a benign lesion, whereas since age of the patient was 72 years old and FNAB result was non-diagnostic, to exclude malignancy intraoperative frozen section was performed.

Although FNAB has an incontestable role in diagnosis for most of the neck masses, it has limited role for preoperative diagnosis of CEPA (3,9,12). In the series of Lüers et al., only 49% of patients were correctly diagnosed with FNAB, this proportion decreases to 43% in series of Zbären et al., an even to 29% in series of Nouraei et al. (3,9,12). In our patient preoperative FNAB was also non-diagnostic. CEPA can be clinically mimic pleomorphic adenoma preoperatively. Although rapid growing for a long lasting pleomorphic adenoma is suggestive of CEPA, it can also be seen in slowly growing, even 40 years long lasting pleomorphic adenoma cases (1). For our case; CEPA was diagnosed postoperatively in a 35-year long lasting, slow growing, clinically characteristics of a benign mass. Diagnosis of CEPA intraoperatively with frozen section analysis is also disappointing. In the series of Zbären et al., half of the patients were misdiagnosed as pleomorphic adenoma with frozen section most likely due to sampling error, so like clinical characteristics, pathologically pleomorphic adenoma can be mixed with CEPA intraoperatively (3). Since FNAB and frozen section analysis are insufficient, most of the authors argue that mainly the clinical features are important for preoperative diagnosis (3,9,12).

Primary treatment of CEPA is surgery. According to site of origin; lateral rhinotomy and medial maxillectomy for lacrimal gland, segmental resection for trachea can be done (14,15,18). Since most of the cases are seen in parotid gland; superficial parotidectomy is sufficient for intracapsular or minimally invasive CEPA whereas total or radical parotidectomy is recommended for frankly invasive cases. Cervical lymph node dissection is advised for clinically obvious neck metastases. Dissection can be functional, modified radical or radical but there is no consensus for the type of the neck dissection (1). Although there is conflicting data for neck dissection and type; since cervical lymph node metastases seems to be an independent predictor of survival, Nouraei et al. recommends routine neck dissection for CEPA cases (12). Lüers et al. argues that neck dissection has both therapeutic and diagnostic meaning in CEPA cases, and only for very small carcinomas with inconspicuous neck metastases, neck dissection may be dispensable (9). The other important factor in prognosis and survival is the pathological subtype of CEPA. Prognosis is excellent with complete excision in cases with intracapsular and in situ CEPA; whereas extended or additional surgery such as radical parotidectomy and neck dissection may be suitable for invasive cases (11). According to our knowledge, there is only one case of neck metastases and one case of lung metastases with benign histological features are present in English literature for intracapsular CEPA (10,19). Since completely excised mass was reported as intracapsular CEPA for our case; she is still in our follow-up without neck dissection for 1 year free of recurrence and metastases.

As a conclusion; for differential diagnosis of long standing neck masses; CEPA of ectopic salivary gland tissue must also be thought.