Ultrasonographic features of ductal carcinoma in situ: analysis of 219 lesions

Ductal carcinoma in situ (DCIS) is a kind of non-invasive breast cancer characterized by malignant proliferation of breast ductal epithelial cells confined to the mammary ductal system without breaking through the basement membrane into surrounding stroma (1). The risk factors of DCIS may be related to the family history of breast cancer, age, the number of years from menarche to the first live birth, the frequency of delivery and the status of menopause. These risk factors were similar to those for invasive breast cancer (2,3). Although DCIS is a non-fatal cancer in the early stage, and many patients with low-grade DCIS even can survive for more than forty years, but about 14–53% may develop into invasive cancer given sufficient time. Of the untreated DCIS patients, the risk of developing invasive breast cancer in ipsilateral breast was significantly increased (4,5). Therefore, early diagnosis and treatment are the most important measures to prevent DCIS from developing into invasive breast cancer (6,7). Management strategies for DCIS treatment include surgery (mastectomy or lumpectomy), radiation therapy, and adjuvant endocrine therapy. The National Comprehensive Cancer Network Clinical Practice Guidelines in Oncology for Breast Cancer (8) recommend that primary treatment options for DCIS are lumpectomy plus whole breast radiation therapy with or without boost to tumor bed, total mastectomy with or without sentinel node biopsy, and lumpectomy alone. And then, endocrine therapy with tamoxifen or an aromatase inhibitor may be considered as a strategy to reduce the risk of recurrence in women with estrogen receptor positive DCIS.

The manners for the detection of DCIS were mainly mammography (MG), ultrasound, and magnetic resonance imaging (MRI). MRI has been prospectively shown to have a sensitivity of up to 98% for high-grade DCIS by using new techniques and sequences to show ductal tree and evaluation intraductal lesions. However, the high price, time-consuming and complex operation make it unable to be widely used (9,10). MG is routinely used for the screening of breast cancer because it can show microcalcification sensitively. Previous studies have reported that MG has a sensitivity of up to 88% for DCIS (11). As a result of the widely use of MG, the detection rate of DCIS keeps growing, approximately 58,490 new cases of DCIS were diagnosed in the United States in 2015 (approximately 211,240 new breast cancer cases among women) (12,13). However, MG may lead to false negative results, especially for patients with dense breast tissue, lesions without microcalcification, and tiny lesions.

Ultrasound has many advantages such as easy to use, real-time image, more efficient in examination of the dense breast tissue, and the ability to detect small lesions and focal dilated breast ducts negative on MG, which make the application of ultrasound in breast cancer screening more and more popular. Especially in the “two cancers” (cervical cancer and breast cancer) screening project in China, ultrasound plays an important role. In China, almost all hospitals and private physical examination institutions were equipped with high-performance ultrasound equipment, and a large number of DCIS cases were detected every year. It is well known that microcalcification is one of the most typical features of DCIS on MG, but little is known about its features on ultrasound. Previous studies have reported that DCIS presented as an irregular hypoechoic mass with an indistinct margin, microcalcifications, ductal changes, and structural distortion, but few reports focused on systematic analysis of ultrasonographic features and ducts abnormalities of DCIS (14,15). The ultrasonographic features of DCIS are not specific, and there is variability in interpretation, understanding the classification of the features can improve the diagnostic accuracy. The evaluation of ducts abnormalities will provide valuable clues to predict the benign or malignant of breast lesions. The evaluation of the ability of ultrasonography in predicting DCIS can provide useful message for clinical decision. In this study, the ultrasonographic features and classification of DCIS were summarized, and the ability of ultrasonography in the prediction of DCIS was evaluated.

We present the following article in accordance with the STARD reporting checklist (available at http://dx.doi.org/10.21037/gs-20-428).

The study was conducted in accordance with the Declaration of Helsinki (as revised in 2013). The study was approved by the Medical Ethics Committee of Chinese People’s Liberation Army General Hospital (NO.: S2020-354-01) and individual consent for this retrospective analysis was waived. In this respective study, the database of patients was searched to identify all patients who were examined by ultrasound and underwent surgery in Chinese People’s Liberation Army General Hospital from January 1, 2014 to December 31, 2019. With histopathological results of the surgical specimens as the diagnostic standard (histopathological results were DCIS, without invasive component and lymph node metastasis), patients with invasive cancer or only biopsy were performed without surgery were excluded, 206 consecutive patients of DCIS were identified. Three patients were excluded again because they had received radiotherapy or endocrine therapy before ultrasonography, and 203 patients with 219 lesions were enrolled. The information of clinical data, gray-scale ultrasound images and pathological results were collected retrospectively.

All patients underwent ultrasonography by sonographers with more than 5 years of experience in ultrasound of breast. Gray-scale ultrasonography were performed using high-frequency linear-array transducers: Philips IU22 with a L12-5 linear array probe, Philips EPIQ7 with a L12-5 linear array probe, Mindray Resona7 with a L11-3U linear array probe. The real-time images and static images were normalized stored in the database of our hospital, and the size was recorded in the reports (including length, width and height). In this study, the size was defined as the maximum length or maximum diameter for masses or areas, and ducts abnormalities were defined as the distortion or dilatation of surrounding branch ducts of hypoechoic areas, ductal extension, ductal dilatation alone, whether accompanied with internal echoes or not. All terms were described according to the American College of Radiology Breast Imaging Reporting and Data System (ACR BI-RADS) (16). BI-RADS categories 1–4a were taken as benign and the BI-RADS scores of 4b to 5 were taken as malignant. Shapes were classified as oval, round, and irregular; orientations were classified as parallel and nonparallel; margins were classified as well-defined, microlobulated, angular, indistinct, and spiculated. Echogenicity of the lesion was defined according to the echo of fat and normal breast tissue: “hypoechoic” means that the echo is lower than fat. “Isoechoic” means that the echo is similar to fat; “hyperechoic” means that the echo is similar to normal breast tissue or higher than the fat.

All images were analyzed by two doctors (ZLW and YH) with more than 10 years of experience in ultrasound of breast without knowing the pathological results. Final decisions were reached by consensus. It is important to note that a patient’s ultrasound image is not clear enough to be effectively assessed, and the diagnosis is based on the report previously stored.

All the 203 patients were women, age 26–87 years, the mean age was 49.7±11.6 years (mean ± SD), 110 patients had palpable masses, 7 patients had nipple discharge, and 86 patients had no obvious symptoms. No adverse events were reported in all patients undergoing ultrasound examinations. 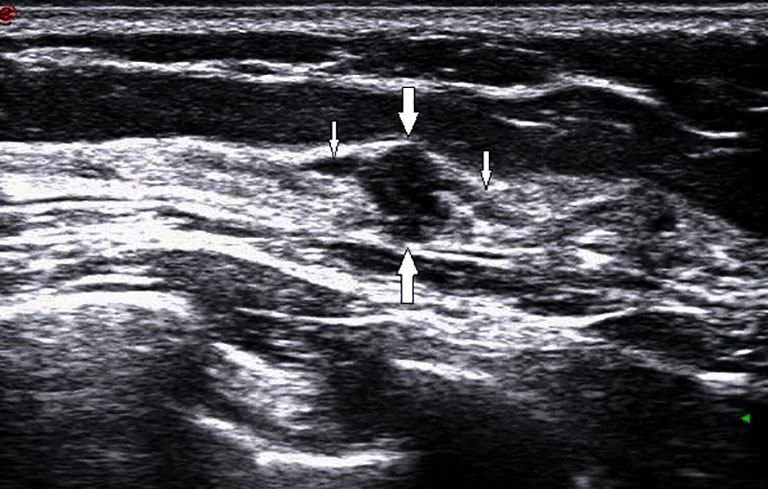 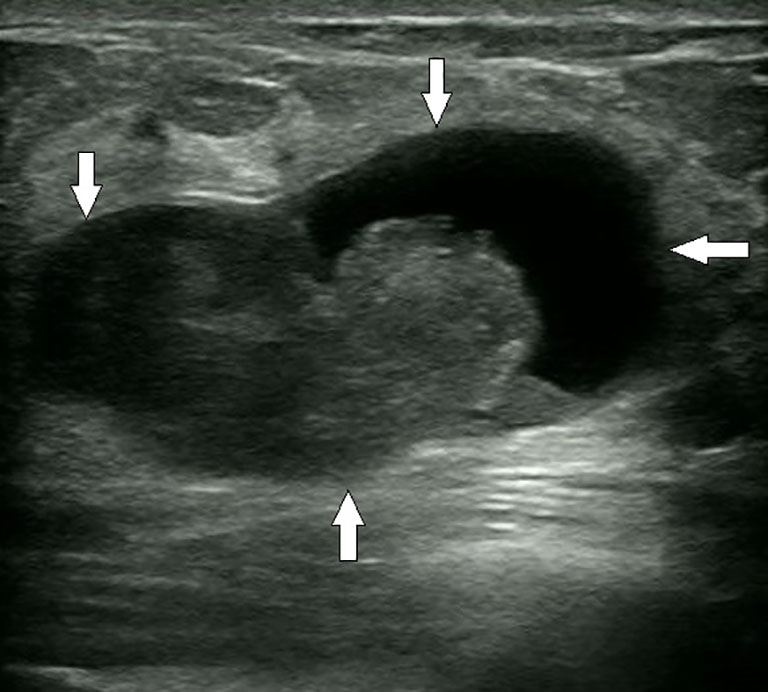 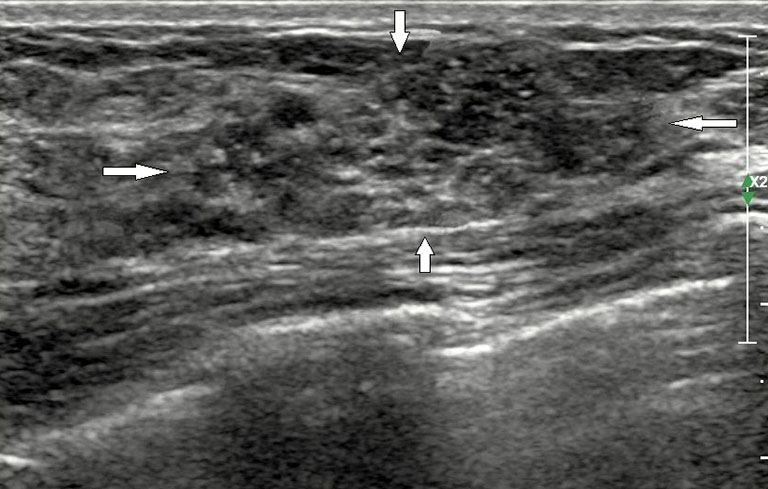 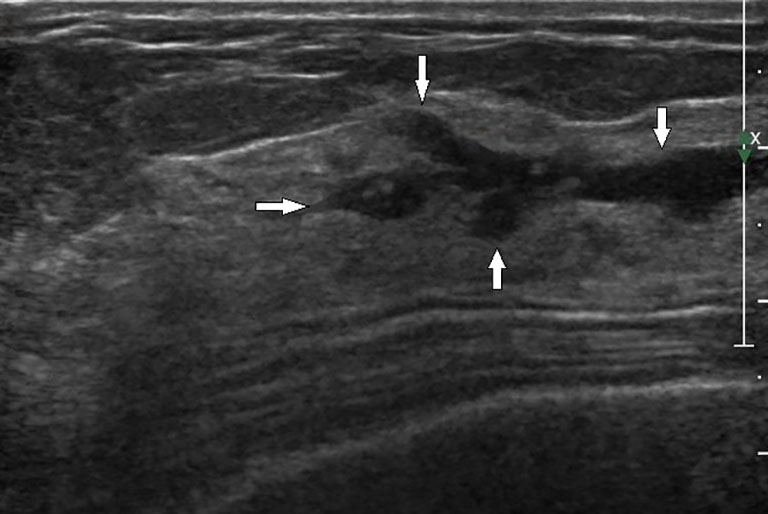 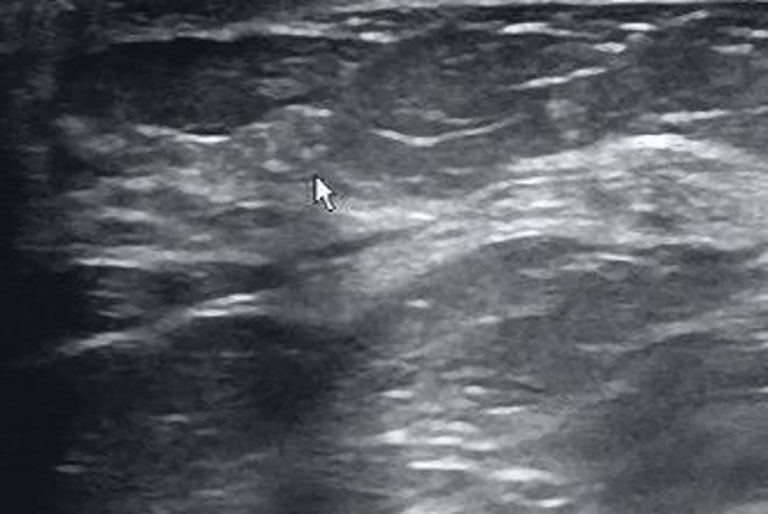 The diagnostic accuracy of hypoechoic solid masses was significantly higher than those of the other ultrasonographic findings (P=0.002).

With the development of ultrasound equipment, ultrasound can be effectively used in the diagnosis of benign and malignant breast diseases. Up to now, ultrasound has become an important complementary tool in breast cancer screening, especially in cases without microcalcification on MG or young people with dense breast tissue (17,18). Therefore, understanding the ultrasonographic features of DCIS is of great significance to the diagnosis of DCIS.

In this study, the diagnostic accuracy of ultrasound for the 219 DCIS lesions was 81.7%, which indicates that there were limitations of ultrasound in the diagnosis of DCIS. Factors such as the diversity of ultrasonographic images of DCIS lesions, the inherent limitations of ultrasound, and the experience of sonographers have brought some difficulties to the diagnosis of DCIS by ultrasound. When benign lesions and malignant lesions cannot be distinguished, biopsy is inevitable. In our series, lesions classified as BI-RADS 4 category were the most frequent (80.4%), which confirmed that most DCIS lesions required further examination, mainly biopsy.

There are some limitations in our study. First, this study was a single center study with a relatively small number of cases, which may not reflect the epidemiological characteristics of DCIS. DCIS is an uncommon breast disease, data in a single center is general limited, and the true incidence may be higher than that in the real world. Nevertheless, this study is important because it reflects the epidemiological characteristics of DCIS in local areas, which may provide reference for future studies; The ultrasonographic features of DCIS summarized in this paper may provide useful clues for the diagnosis and treatment of breast diseases. Second, only the patients both underwent ultrasonography and histological results of the surgical specimen were DCIS were included in this study, which introduced an element of selection bias. Third, only gray-scale ultrasound images were evaluated in this study, while color doppler ultrasound, elastography and contrast-enhanced ultrasound were not observed and evaluated. The prospective study by color doppler ultrasound, elastography and contrast-enhanced ultrasound will be added in the future.

DCIS lesions can effectively be recognized as mass-like lesions and non-mass-like lesions by ultrasound. Hypoechoic areas and hypoechoic solid masses were the most common ultrasonographic features of DCIS. Ducts abnormalities and punctate echogenic foci were helpful for the diagnosis of DCIS.

Reporting Checklist: The authors have completed the STARD reporting checklist. Available at http://dx.doi.org/10.21037/gs-20-428

Conflicts of Interest: All authors have completed the ICMJE uniform disclosure form (available at http://dx.doi.org/10.21037/gs-20-428). ZLW serves as an unpaid editorial board member of Gland Surgery from April, 2019 to March, 2021. The other authors have no conflicts of interest to declare.

Ethical Statement: The authors are accountable for all aspects of the work in ensuring that questions related to the accuracy or integrity of any part of the work are appropriately investigated and resolved. The study was conducted in accordance with the Declaration of Helsinki (as revised in 2013). The study was approved by the Medical Ethics Committee of Chinese People’s Liberation Army General Hospital (NO.: S2020-354-01) and individual consent for this retrospective analysis was waived.