The current situation of Endocrine Surgery in Latin America

Surgical disorders of the endocrine glands, particularly those involving the thyroid and parathyroid glands, are among the most common procedures performed by general surgeons. Palpable thyroid nodules are present in 4-7% of North American adults (1). Reported incidence rates for thyroid cancer in 2003 was 9 cases per 100,000 habitants (2), and for primary hyperparathyroidism (HPT) 1 case for every 500 women and 1 case for every 2,000 men 40 years old and older. Incidental adrenal nodules have been reported in up to 4% of abdominal computed tomography scans, and in up to 32% of autopsy studies (3,4). The prevalence of surgical endocrine conditions in Latin America is unknown due to the lack of epidemiological registers. Some reports place age-adjusted thyroid cancer incidence rates in women between 3.7 for every 100,000 inhabitants in Chile and 20.9 for every 100,000 inhabitants in Brazil (GLOBOCAN 2012).

In terms of surgery, 80,505 endocrine surgical procedures were performed in the United States of America in 2004, and it is expected that this figure will be over 100,000 procedures per year by 2020. Currently, only 24% of the procedures are performed by high volume surgeons (5).

Some 21 surgeons were identified (76% <50 years old and 76% males), distributed among 9 countries. México had the largest number of trained specialists (7 endocrine surgeons) in active practice (Figure 1). Most of these 21 surgeons trained abroad in Endocrine Surgery for a period equal to or greater than 12 months (Figure 2) in renowned international units (Barcelona, Lille, London, Marseilles, Mexico City, Miami, Rochester and Stockholm) (Figure 3). Their professional exercise ranges mostly under 5 years from the completion of their training (Figure 4). Over 75% of the surgeons interviewed perform more than 100 endocrine procedures per year, being thyroid surgery, followed by parathyroid surgery the most common operations (Table 1 and Figure 5). 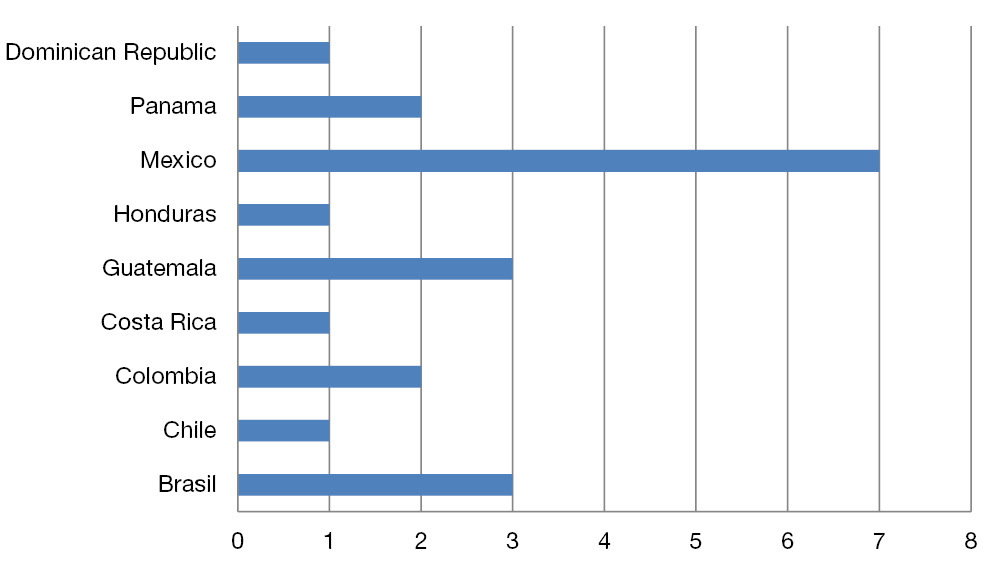 Figure 1 Distribution of endocrine surgeons per country of residence. 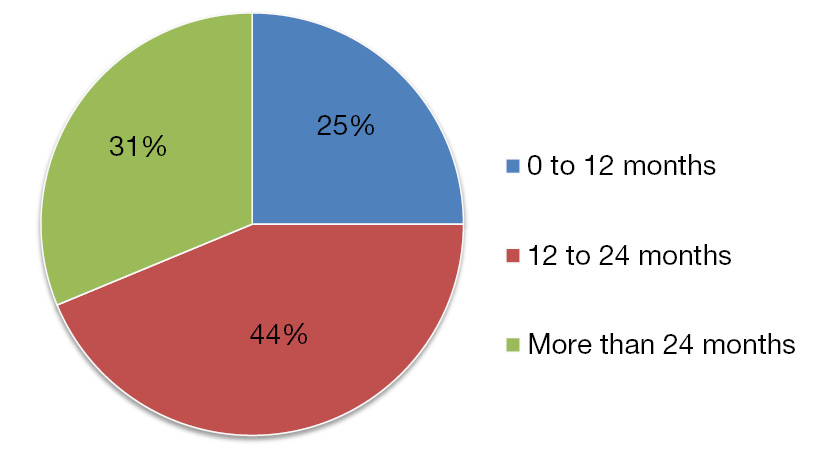 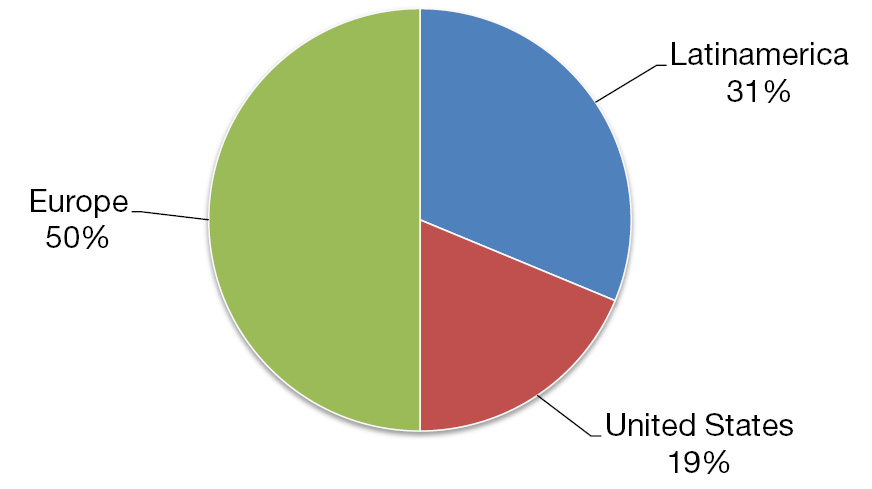 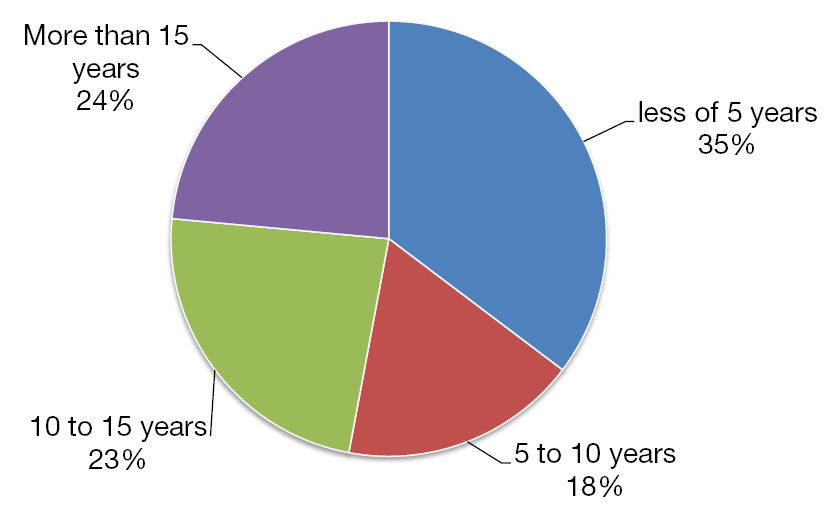 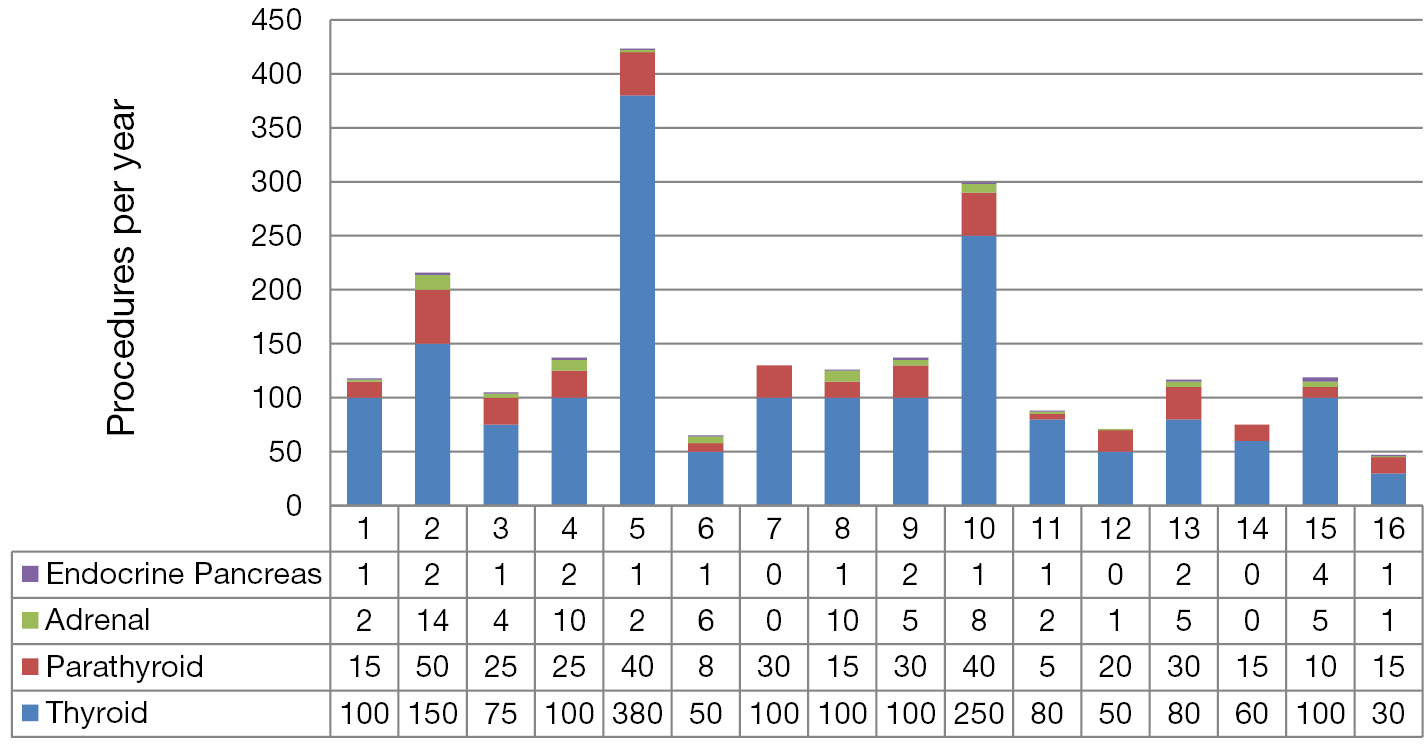 Figure 5 Distribution of procedures per surgeon/year.

Although data from Latin America are limited, general surgeons and surgical oncologists, most of them with a subspecialty in head and neck, perform thyroidectomies and parathyroidectomies. Urologists and oncological surgeons are those mostly performing adrenal procedures; hepatobiliary surgeons take care of islet cell tumors. Otolaryngologists also perform some neck endocrine procedures.

A search was performed on PubMed looking for the articles published by the 21 identified Latin American endocrine surgeons. Additional keywords were: endocrine surgery, thyroid, parathyroid, adrenal gland, neuroendocrine tumors. Only articles related to Endocrine Surgery were considered. A total of 62 publications were identified, 70% were from Mexican authors followed by publications from Brazil, Colombia and Guatemala (Figure 6). 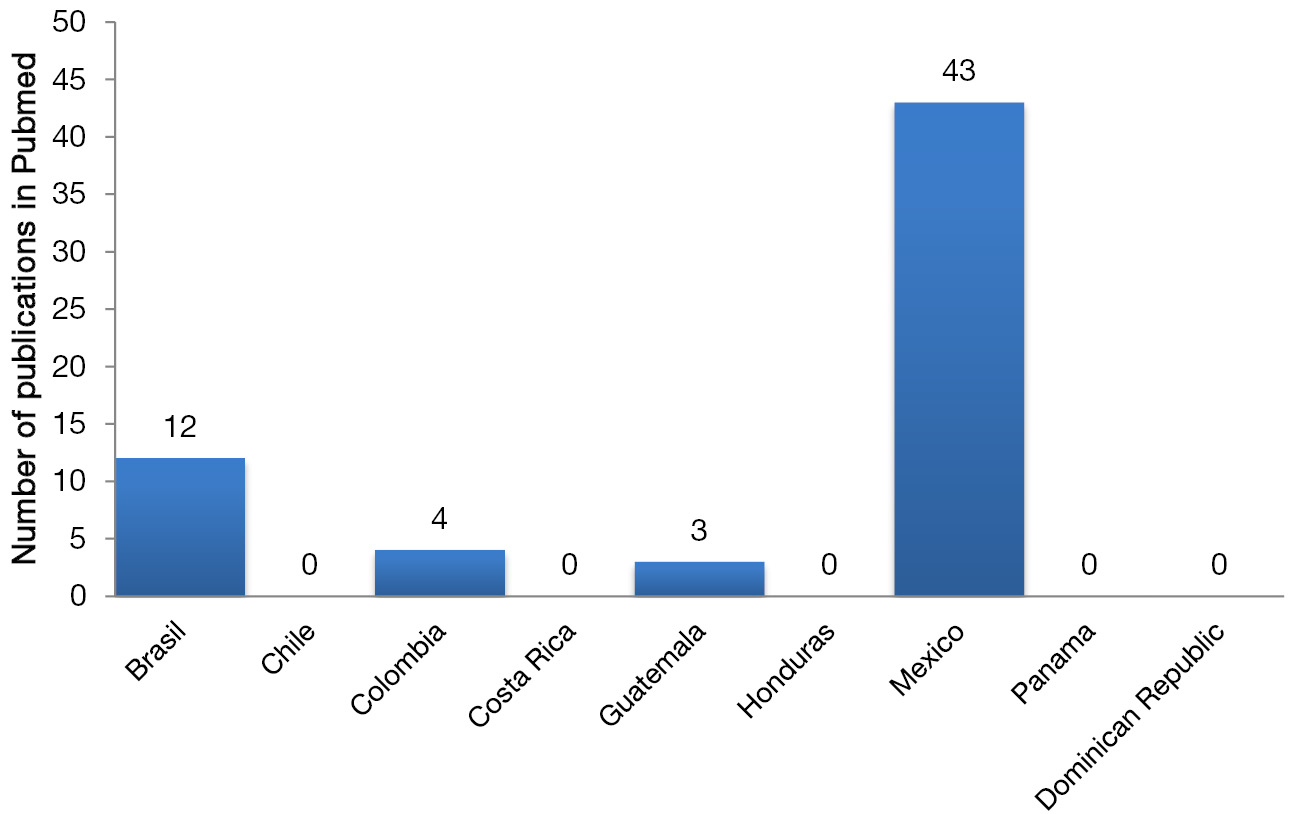 Many research projects are currently underway and hopefully, the number of research articles from Latin American endocrine surgeons will increase in the near future.

There are three university-endorsed fellowships in Endocrine Surgery in Latin America.

Among the pioneers in Latin America was Miguel F Herrera who was trained on endocrine and bariatric surgery at the St Joseph’s Hospital in Toronto and at the Mayo Clinic in 1990 and 1991. Upon his return to Mexico he established the first Endocrine Surgery unit in Latin America at the National Institute of Nutrition and a university endorsed fellowship in Endocrine Surgery in 1998.

More than 30 years ago, Marco Antonio Peñalonzo, from Guatemala, trained as an endocrine surgeon in Lille (France) under Professor Charles Proye and currently holds a 14-month endocrine surgery training program (12 months in Guatemala and 2 months in Mexico) which has graduated two surgeons from Honduras.

In Brazil, Alberto Molinari, co-founder and president of the SBEC, was trained in Miami. He is currently training the first endocrine surgeon in Brazil.

In Medellín, Colombia, Juan Pablo Dueñas trained for a year at the Hospital del Mar in Barcelona (with A. Sitges-Serra and J. Sancho) and is currently professor at Universidad CES, Universidad Pontificia Bolivariana, Universidad de Antioquia and Universidad Militar Nueva Granada de Colombia; and recruiting residents interested in endocrine surgery.

No endocrine chapters were found within the statutes and/or committees of these different General Surgery societies. Committees of head and neck surgery, oncology surgery and minimally invasive or laparoscopic surgery mostly represented the endocrine practice. 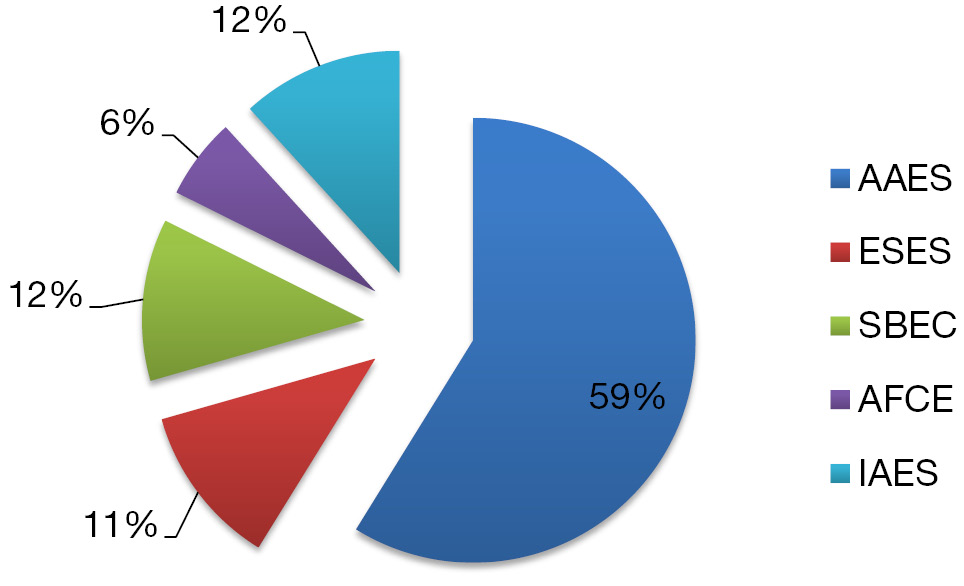 It is important to stress that both the AAES and the ESES have strict certification and approval guidelines for both their active and correspondent members, such as mandatory number of endocrine surgery procedures with verification of ascribed members’ curriculum.

Relevance of the specialization in endocrine surgery

It is almost unanimously accepted that a sub-specialty in a restricted field of surgery allows better overall knowledge of the subject, a larger surgical workload, better clinical outcomes, and greater opportunities both for teaching and research. And yet, this concept has not been widely implemented in real life. In 2003, Saunders analyzed data on United States National Patients Register entries between 1998 and 2000, and found that surgeons whose endocrine surgery practice amounted to less than 25% of their total practice, performed 82% thyroidectomies, 78% parathyroidectomies and 94% adrenalectomies in the United States, while surgeons with endocrine practice exceeding 75% of their practice only performed 3%, 5% and 3% of the thyroidectomies, parathyroidectomies and adrenalectomies respectively (6).

Adkisson analyzed all primary thyroidectomies performed within the United States Health System in 2011 for differentiated cancer of the thyroid ≥1 cm. He correlated the volume of procedures, extension of surgery, and completeness of the surgical resection (post-operatory iodine uptake and thyroglobulin levels). Important findings were that surgeons who performed over 30 procedures per year achieved more complete total thyroidectomies and that more than 50 procedures/year were needed to optimize the prognosis in advanced disease patients (7).

Regarding parathyroid surgery, a successful neck exploration for primary HPT is primarily dependent on the experience of the surgeon, the anatomic location of the parathyroid glands (normal or ectopic sites) and the presence of a single adenoma as opposed to multiglandular disease or carcinoma (8). The overall surgical cure rate for HPT of high volume parathyroid surgeons (>50 cases per year) is 95.2% after primary operation and 82.7% after reoperation. Compared to high volume surgeons, low volume endocrine surgeons had significantly higher complications rates after primary operation (1.9% vs. 1.0% respectively; P<0.01) and reoperation (3.8% vs. 1.5%; P<0.001) as well as higher in-hospital mortality rates (1.0% vs. 0.04%; P<0.05) (9). The rate of persistent hyperparathyroidism can be as high as 30% in less experienced hands (10).

In a study with 8.381 patients undergoing adrenal surgery from 1996 to 2009 in the United States, 42% of the patients were referred to high volume centers (15 or greater procedures per year). Patients were significantly less likely to die when treated in high volume compared with low volume units (OR, 0.38; P=0.006) and the hospital stay was shorter (11).

The authors believe that Endocrine Surgery requires qualified and specifically trained surgeons in order to optimize the surgical treatment and minimize the number of complications. Our mission is to promote education in endocrine surgery in Latin America and to disseminate this subspecialty among residents of general surgery and general surgeons.

The authors would like to thank all Latin American endocrine surgeons committed to the dissemination and teaching of this surgical specialty.