The incidence of papillary thyroid carcinoma (PTC) has increased sharply worldwide in recent decades (1). Generally, PTC has an excellent prognosis, but neck lymph node metastases (LNM) are quite common, which increases the risk of tumor relapse and reduce long-term survival (2-4). Evaluating LNM accurately is thus essential for appropriate initial surgical management (5,6). The Delphian lymph node (DLN) (prelaryngeal lymph node) was named by the “Oracle of Delphi” (7), the most famous religious prophet in the temple of Apollo of ancient Greek times. Several studies have reported that DLN metastasis might be predictive of widespread nodal involvement (7-9). A recent meta-analysis reported that DLN positivity is valuable for predicting central and lateral LNM (10). However, the population included, study methods and results reported were heterogeneous, thus the clinical significance of DLN metastasis has yet to be independently evaluated. Therefore, to clarify the clinical implications of DLN positivity, the present study investigated the clinicopathologic characteristics of DLN metastasis in patients with PTC.

We present the following article in accordance with the STROBE reporting checklist (available at http://dx.doi.org/10.21037/gs-20-521).

This retrospective study was conducted with clinical information collected at the Department of Endocrine and Breast Surgery, The First Affiliated Hospital of Chongqing Medical University from July 2013 to December 2018. This study was conducted in accordance with the Declaration of Helsinki (as revised in 2013), and approved by ethical review board of The First Affiliated Hospital of Chongqing Medical University (reference number: 2020-182). Informed consent was obtained from all participants. Clinical information, such as tumor diameter, clinical N stage, gender, age, LNM and other relevant data of patients were derived from the electronic medical records. Inclusion criteria were patients with histologically confirmed PTC who underwent thyroid surgery and had complete medical records and follow-up information while patients who had neck surgery before and those with incomplete medical records and distant metastasis were exclusions.

All surgeries were performed according to a standard procedure (11): we inject nanocarbon suspension into the thyroid gland to distinguish the stained lymph nodes from fatty tissues facilitating nodal dissection. CLN were divided into 3 nodal sites: DLN, pretracheal LN and paratracheal LN. First, soft tissue in the prelaryngeal region was deliberately excised and labeled as the DLN, then pretracheal LN was removed and labeled as pretracheal LN. Those two groups were immediately and separately sent for intraoperative frozen section examination while we performed lobectomy and ipsilateral paratracheal LN dissection. The paratracheal LN were also sent for frozen section examination as mentioned above. Surgical specimens were all sent for postoperative histopathologic diagnosis by three pathologists.

Patients were followed up 12–78 months. The locoregional recurrence was defined as any newly detected tumor or metastatic LN on fine-needle aspiration (FNA) or on the pathologic diagnosis after reoperation. 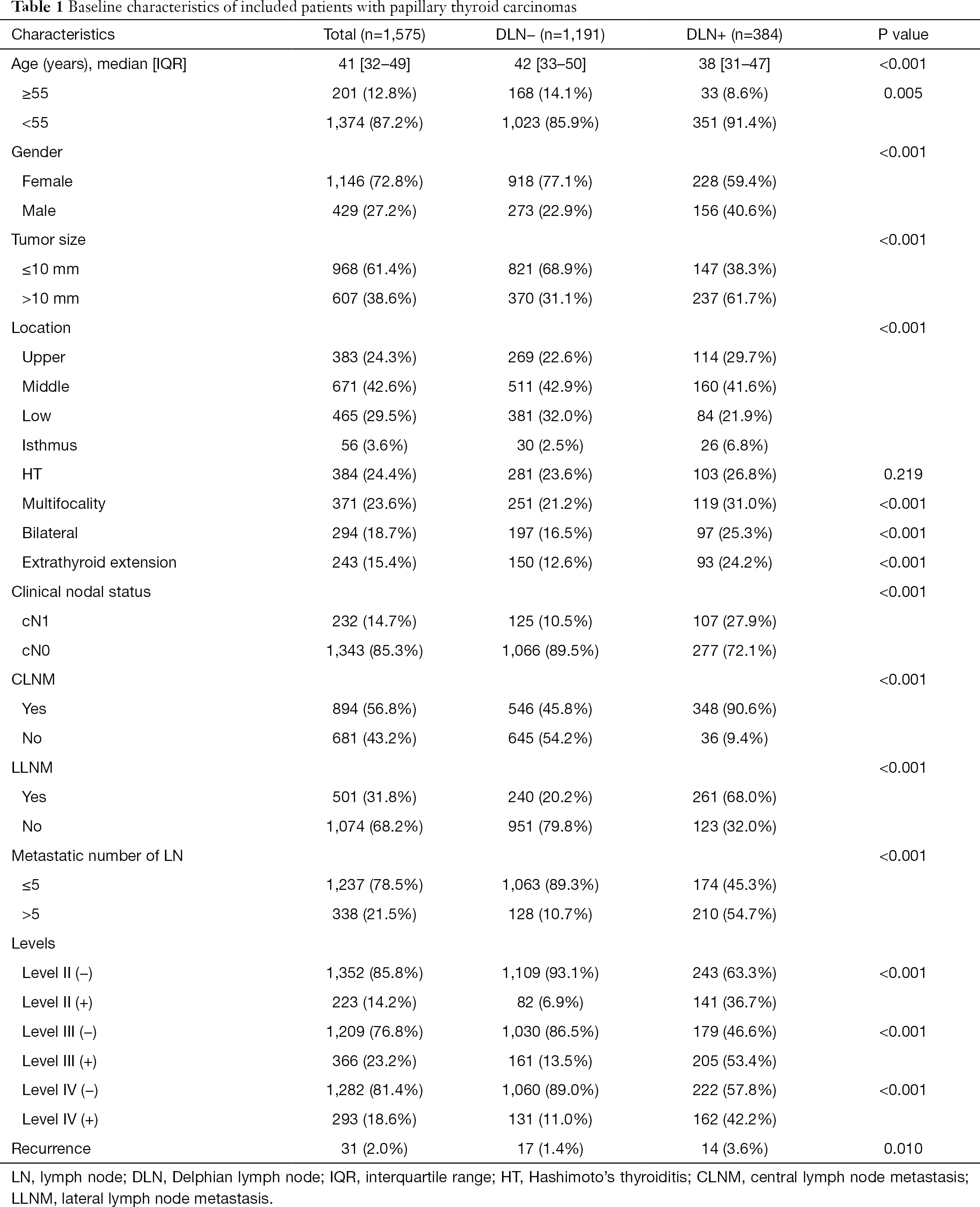 As shown in Figure 2, the median tumor size and number of metastatic lymph nodes in the DLN-positive group were both significantly higher than that in the DLN-negative group (all P<0.05), regardless of male or female. The incidence of CLNM according to the clinical N stage is presented in Figure 3A. cN1: central lymph node metastatic rate in groups with DLN metastasis and without DLN metastasis were 98.1%, 68.8%, respectively (P<0.001). cN0: central lymph node metastatic rate were 87.7%, 43.2%, respectively (P<0.001). We found that for patients with stageT1-T2, noninvasive, cN0 tumors, the DLN-positive group yielded significantly higher incidence of CLNM as compared with DLN-negative group (86.4% vs. 42.7%, P<0.001) (Figure 3B). 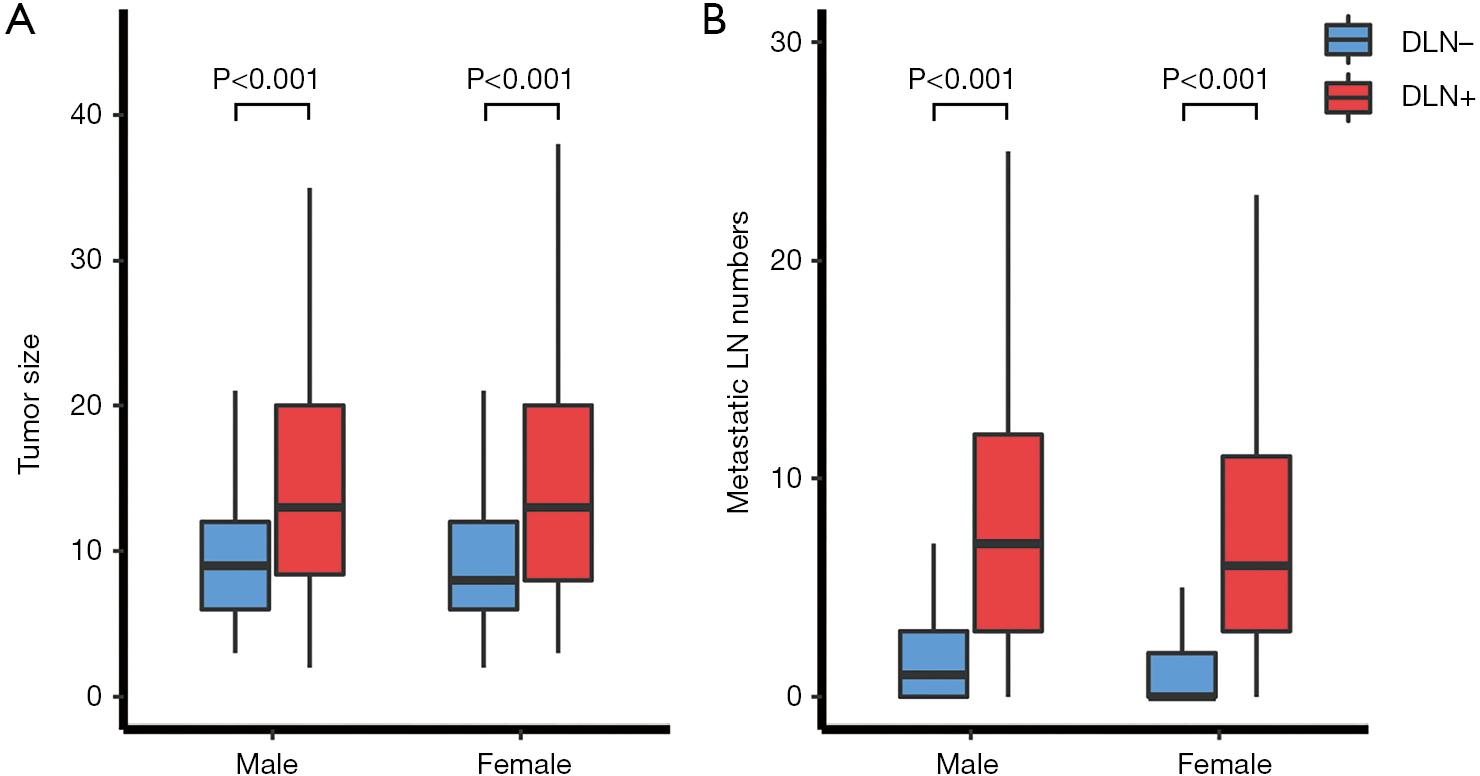 Figure 2 Comparison of tumor size (A) and the number of metastatic LN (B) between the DLN-negative group and the DLN-positive group. LN, lymph node; DLN, Delphian lymph node. 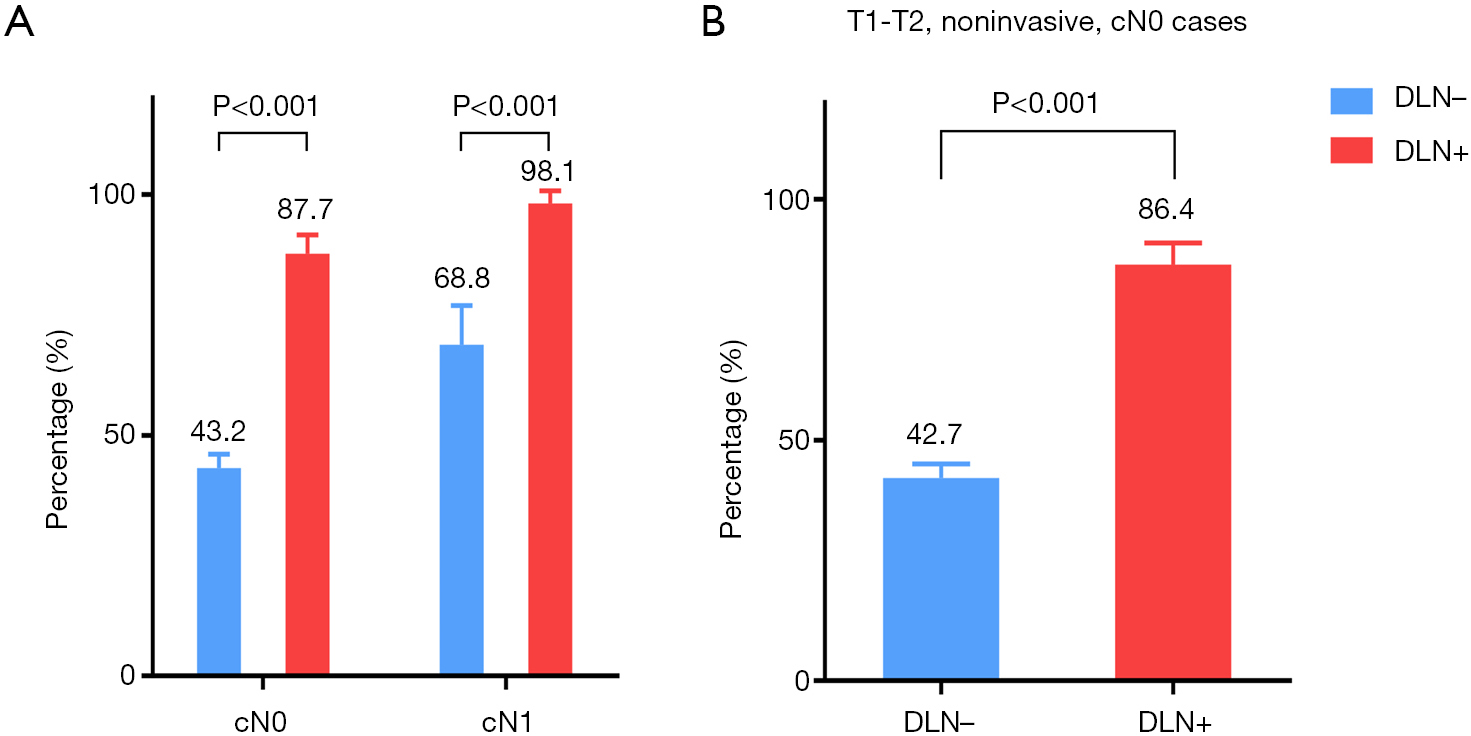 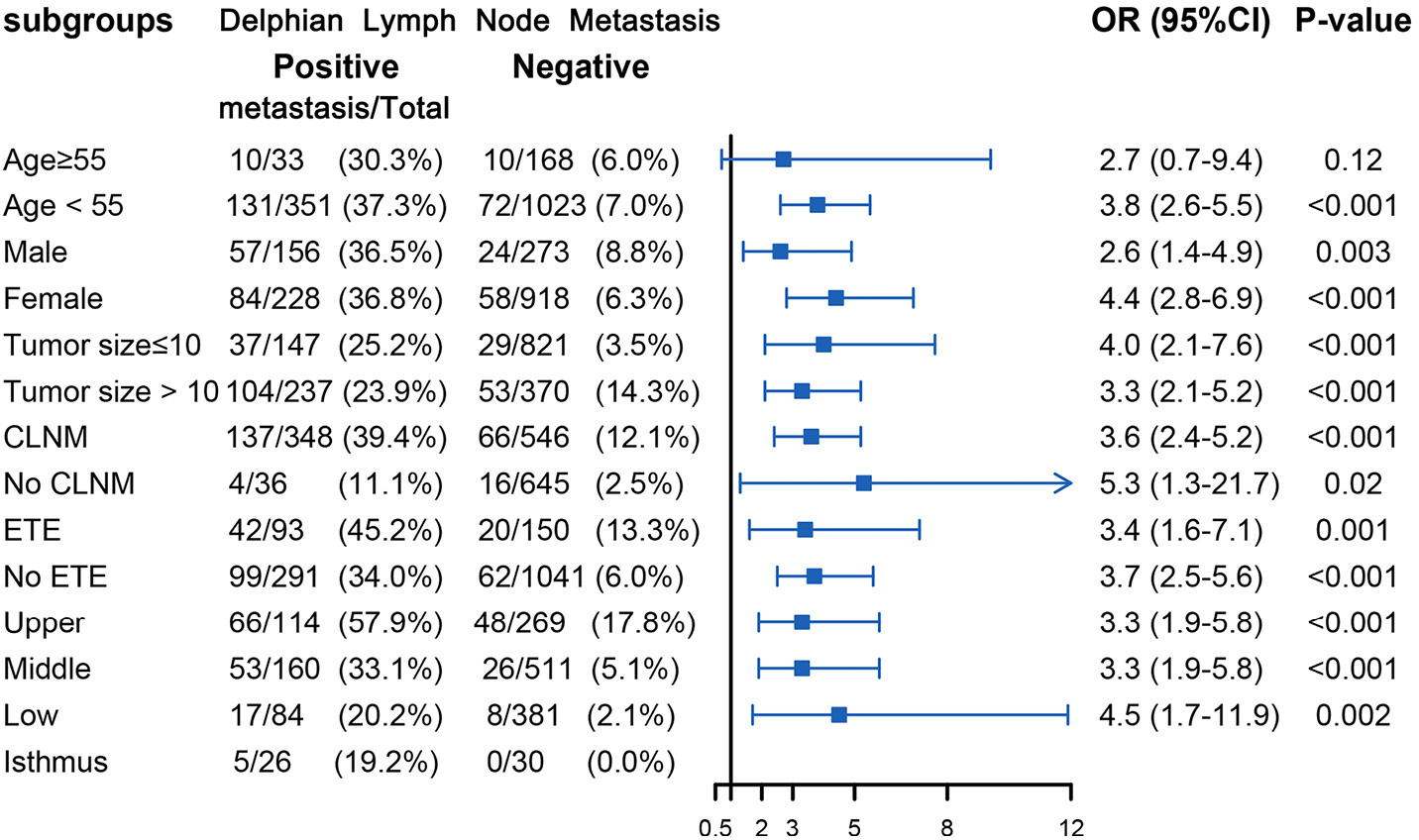 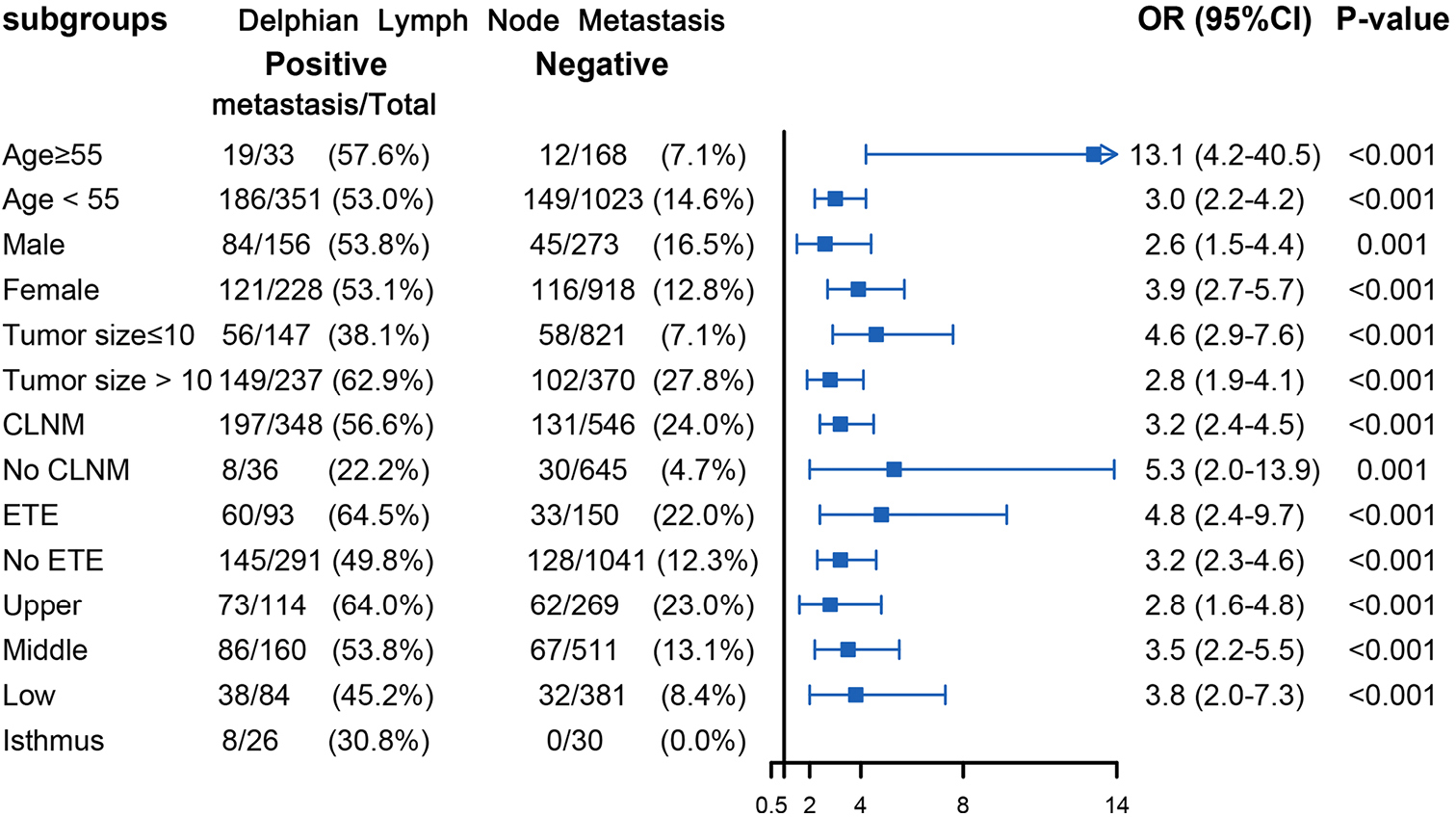 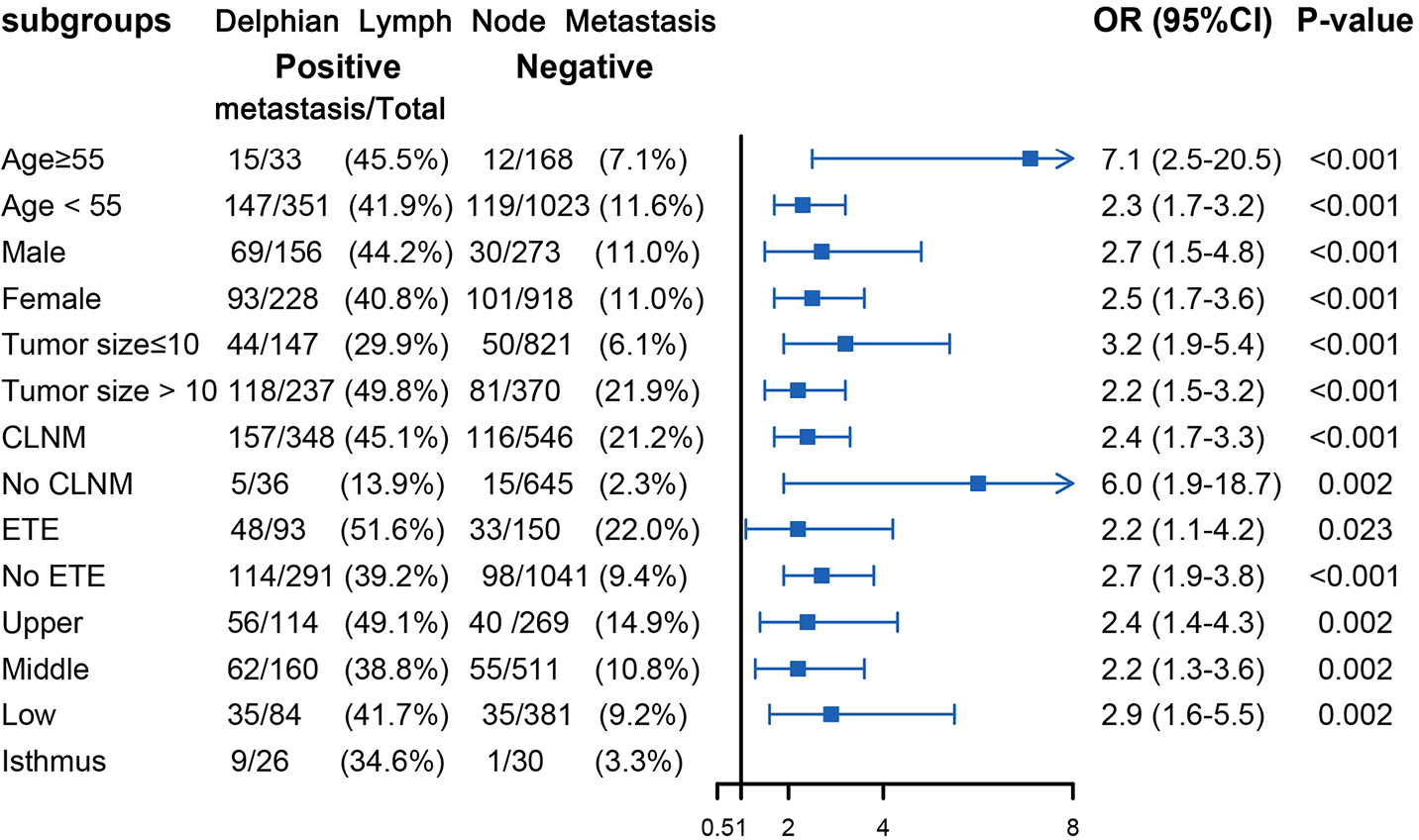 LNM is an important factor of recurrent disease, which places a huge burden on both surgeons and patients (12). Many clinicopathological factors associated with LNM including tumor location, DLN status have not been carefully considered in risk stratification in any recommendations or guidelines to help intraoperative decision-making for tailored surgery. Previous several similar studies indicated that DLN involvement was associated with adverse prognostic factors (8,9). However, their sample size is so small (with no more than 500 cases) and most are univariate analyses, which may not generate robust results. Recent meta-analysis had similar conclusions, albeit limited by the heterogeneity of the studies and data in the literature regarding the clinical significance of DLN metastasis were insufficient. This study is expected to contribute significant data to this topic.

Scholars in North America and European countries hold a relatively conservative view on prophylactic central compartment neck dissection (pCCND) (13-16). On the contrary, guidelines from China and Japan recommend the routine performance of pCCND. We found that only 14.7% of the cases were cN1 but CLNM occurred in 56.8% of patients, approving of the idea that neck ultrasonography has low diagnostic accuracy in identifying clinically relevant LNM (17). Therefore, to improve the accuracy of evaluation of the nodal status, more attention should be paid to the intraoperative information (18). Intraoperative frozen section examination can be conveniently used to guide a real-time diagnosis of the DLN status (11). According to DLN status, we found the rate of CLNM differs significantly in cN0 (87.7% vs. 43.2%) and cN1 (98.1% vs. 68.8%). Moreover, the 2015 ATA consensus stated that it is appropriate not to perform a pCCND for patients with stage T1-T2, noninvasive, cN0 tumors (14), but our data of those patients showed that a relatively high rate of CLNM in DLN-positive group compared with DLN-negative group (86.4% vs. 42.7%). And on multivariate analysis, DLN metastasis was found to be an independent predictive factor for CLNM. Based on these results, the decision not to perform pCCND could leave behind metastatic lymph nodes, especially for patients who are confirmed to be DLN positive during operation.

Consistent with the study reported by Chai et al. (19), we found that patients with positive DLN involvement were more likely to have tumor located in upper portion/isthmus (36.5% vs. 25.1%, P<0.001). This may reflect the DLN, which mainly collect lymphatic drainage of the upper portion and isthmus. Meanwhile, the upper thyroid lobe was recognized as metastasizing more easily to the lateral lymph node (17,20). Since N1b represents a high risk of disease recurrence (21), 32% of patients had LLNM in our study. Other preliminary studies have also reported that DLN-positive patients were at higher risk of LLNM than DLN-negative patients (7,10). This time our data provide strong evidence of the correlation between DLN metastasis and LLNM after fully adjusting the effect of potential confounding factors through multiple models. Furthermore, the subgroup analysis revealed that DLN metastasis was independently correlated with levels II, III, IV metastasis, particularly in lesions in the superior pole. Therefore, these findings suggest that the DLN status based on intraoperative frozen section examination is valuable to help guide tailoring the extent of dissection. When intraoperative frozen section examination suggests DLN is positive, we recommend performing a central compartment neck dissection. Lateral LN of ipsilateral levels II, III, IV should be meticulously evaluated. More precisely and comprehensively individual evaluation of lateral LN of each sub-level incorporating clinicopathologic features is still necessary in the future (22,23).

To the best of our knowledge, our study covers the largest sample size on this issue with nearly 1,600 patients. Besides, rigorous analyses were executed to control important confounders. Nevertheless, this study still has several limitations. First, the nature of this retrospective study may contribute to a potential selection bias. It is hoped that a prospective randomized trial of lymph node dissection based on DLN status with long-term follow-ups may be helpful. Second, PTC types including rare variants were not included in the analysis.

In patients with PTC, DLN metastasis is an independent risk factor for CLNM and LLNM of levels II-IV. Our data strongly suggest that when DLN positivity was confirmed by intraoperative frozen section examination, meticulous intraoperative assessment for LNM is required to guide tailored treatment.

Funding: This work was supported by grants from Chongqing Science and Technology Committee (cstc2017shmsA1035).

Reporting Checklist: The authors have completed the STROBE reporting checklist. Available at http://dx.doi.org/10.21037/gs-20-521

Conflicts of Interest: All authors have completed the ICMJE uniform disclosure form (available at http://dx.doi.org/10.21037/gs-20-521). The authors have no conflicts of interest to declare.

Ethical Statement: the authors are accountable for all aspects of the work in ensuring that questions related to the accuracy or integrity of any part of the work are appropriately investigated and resolved. The study was conducted in accordance with the Declaration of Helsinki (as revised in 2013) and approved by ethical review board of The First Affiliated Hospital of Chongqing Medical University (reference number: 2020-182). Informed consent was obtained from all participants.