Since the time when the first parathyroidectomy was performed by Dr. Felix Mandl in 1925, the procedure of bilateral neck exploration done by an experienced parathyroid surgeon has been for many years the gold standard in parathyroid surgery, allowing for achieving cure rates exceeding 95% of patients with primary hyperparathyroidism (1,2). Nevertheless, the recently developed modern imaging techniques allowing for preoperative localization of diseased parathyroid gland, such as parathyroid scintigraphy or high-resolution ultrasonography, followed by developing a method of intraoperative quality control of surgical treatment based on intraoperative serum intact parathyroid hormone (iPTH) assay, became the milestones in forming the idea of minimally invasive parathyroidectomy, focusing on using a small incision to resect a solitary image-indexed parathyroid adenoma without a necessity of intraoperative identification and evaluation of the remaining parathyroids (3).

In 1988, Nussbaum et al. modified the original immunoradiometric assay by increasing the temperature of incubation and employing a kinetic enhancer; the above changes decreased the turnover time to approximately 15 minutes (8). In this initial report, the first use of iPTH monitoring during parathyroidectomy was described, although the patients in this series underwent bilateral neck exploration and iPTH was measured postoperatively. Although the reporting of this experience appeared to be of clinical interest, it was not readily accepted as an alternative to the existing practice of highly successful conventional bilateral neck exploration. In 1990, Chapuis et al. from Paris reported in French their series of 13 patients in whom the iPTH dropped above 70% in 20 minutes after parathyroidectomy by using the immunoradiometric assay for intraoperative iPTH measurement (9). Utilizing a modification of the technique described by Nussbaum, Irvin was able to demonstrate a rapid decline in parathyroid hormone levels measured intraoperatively following removal of the second parathyroid adenoma. In 1991, Irvin et al. described for the first time a series of 21 patients who had their parathyroidectomy guided exclusively by intraoperative iPTH assay using an immunoradiometric method (10). With George Irvin’s help, in 1996, this rapid assay method was developed further to an immunochemiluminescence method, and the “quick” iPTH assay became commercially available for intraoperative use, which is still the methodology used today (11). Currently, the majority of high-volume parathyroid surgeons utilize this technique to guide parathyroidectomy in patients with a sporadic primary hyperparathyroidism (12-18).

The intraoperative iPTH assay can be utilized in three discreet modes of application:

A peripheral vein access is most commonly used for collection of blood samples. This access should be kept open with saline infusion throughout the procedure, and an intravenous extension is used to give the anesthesiologist access to the tubing for blood collection at times requested by the surgeon. It is extremely important to instruct the anesthesia team about discarding 10 mL of blood with saline to avoid sample dilution, potentially leading to falsely lower iPTH values. Totally 3 mL of blood are collected for iPTH measurement and are placed in an ethylenediaminetetraacetic acid (EDTA) coated tube at specific time-points and immediately centrifuged. To achieve reliable results, it is strongly recommended to follow the strict protocol of blood testing at specific time-points during parathyroidectomy, which allows for understanding the hormone dynamics during the operation. The following time-points of blood sampling for iPTH are most commonly used: (I) in the operating room before the skin incision is made (pre-incision baseline); (II) just before the blood supply to the suspicious parathyroid gland is ligated (pre-excision baseline); (III) at 10 minutes (10 minutes post-excision); and (IV) occasionally at 20 minutes after excision (20 minutes post-excision) of the suspected abnormal gland (Figure 1). An intraoperative iPTH drop of more than 50% from the highest either pre-incision or pre-excision baseline at 10 minutes post-excision is highly accurate in predicting postoperative normal or low serum calcium values (Miami criterion). The iPTH assay total turnaround time may vary from 8 to 15 minutes depending on the laboratory. During this waiting time, the surgeon can close the incision, but any manipulation of the remaining parathyroids should be avoided in order to minimize the chance of falsely elevating iPTH levels resulting in a delay in hormone drop. If the assumed criterion is not met at 10 minutes post-excision, the extended neck exploration is undertaken and the protocol for blood sampling is repeated for each additional excised suspicious parathyroid gland until all hypersecreting parathyroid tissue is removed, which is confirmed by meeting the criterion. In cases approaching but not meeting the assumed criterion of an iPTH drop at 10 minutes post-excision, some surgeons recommend obtaining an additional 20-minute post-excision sample for iPTH measurement in order to rule out the false negative result of the testing. However, such an approach is not uniformly agreed upon and some data suggest that extended neck exploration should be rather attempted instead. 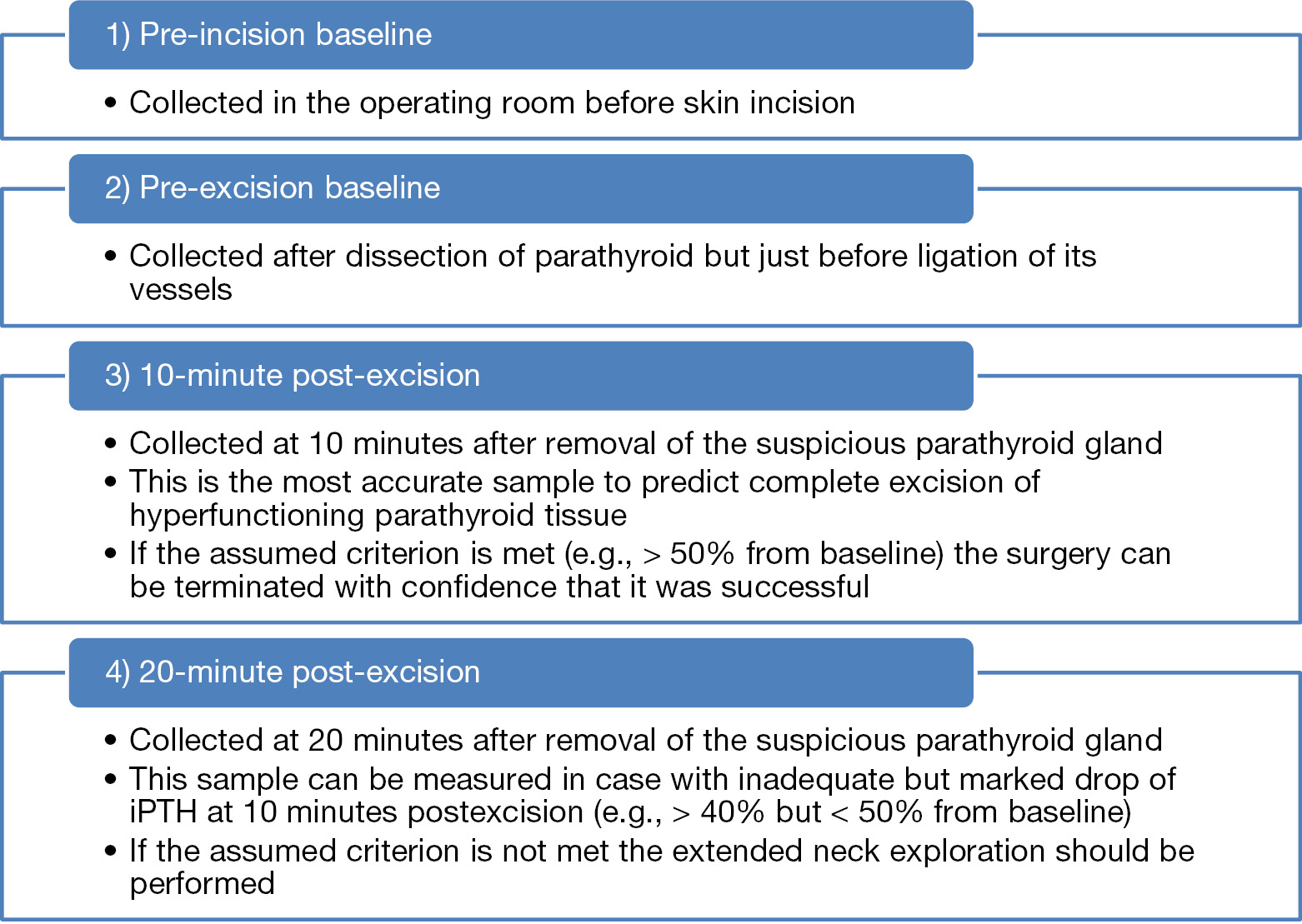 The issue of appropriate patient selection plays a fundamental role in achieving a high success rate of minimally invasive parathyroidectomy approaching 100%. To achieve a high success rate of parathyroidectomy, the surgeon needs to be aware of intraoperative hormone dynamics during the case and carefully choose the protocol and interpretation criteria that best fit the individual practice. Understanding the nuances of intraoperative iPTH monitoring allows the surgeon for achieving intraoperative confidence in predicting operative success and preventing failure in cases of unsuspected multiglandular disease, while safely limiting neck exploration in the majority of patients with sporadic primary hyperparathyroidism. When concordant results of functional imaging (e.g., sestamibi scanning) and ultrasound performed by an experienced investigator are obtained, minimally invasive parathyroidectomy can be safely recommended (6,24-26). The prevalence of multiglandular parathyroid disease among patients with primary hyperparathyroidism and concordant imaging tests varies from 1% to 3.5% (26,27). Thus, when preoperative localization with sestamibi and ultrasound is concordant for single-gland disease, the use of intraoperative iPTH monitoring is of little value. However, if preoperative localization with sestamibi and ultrasound is not concordant and the surgeon wishes to perform a minimally invasive “selective” operation, the use of intraoperative iPTH monitoring is recommended, as the prevalence of multiglandular disease in this subgroup of patients with primary hyperparathyroidism approaches 17% (25,27,28). Similarly, the use of intraoperative iPTH monitoring is recommended for patients undergoing selective parathyroidectomy on the basis of a single preoperative localization study (27,28).

On the other hand, the accuracy of intraoperative iPTH monitoring in the detection of patients with multiglandular disease is highly dependent on the criteria applied. Few studies have shown that the Miami criterion followed by the Vienna criterion is the best balanced among other criteria, with the highest accuracy in intraoperative prediction of cure (26,29,30). However, the Rome criterion followed by the Halle criterion is most useful in intraoperative detection of multiglandular disease (26,30,31). Nevertheless, their application in patients qualified for minimally invasive parathyroidectomy with concordant results of sestamibi scanning and ultrasound of the neck would result in a significantly higher number of negative conversions to bilateral neck explorations and only a marginal improvement in the success rate of primary operations (26). Thus, the accuracy of intraoperative iPTH monitoring is highly dependent on the criteria used by the surgeon to predict the outcome of parathyroid surgery. The most common criteria used for prognostication of the outcome of parathyroid surgery and their predictive values are summarized in Table 1 (26).

Other applications for intraoperative iPTH monitoring

Intraoperative iPTH assay can be utilized to differentiate between parathyroid and non-parathyroid tissue, such as thyroid nodules and lymph nodes, with a specificity of 100% by iPTH measurement in the fine-needle aspiration washout (19-21). The aspirated content in the needle is diluted with 1 mL of saline solution, centrifuged, and the supernatant is used for iPTH measurement. This technique is faster than frozen section if the quick assay is used as a point-of-care system, which can be very helpful when gland identification is difficult, e.g., in the case of an intrathyroidal parathyroid or a lesion that could be a thyroid nodule versus a subcapsular parathyroid gland (37).

In addition, intraoperative iPTH measurement can be used to lateralize the side of the neck harboring hyperfunctioning parathyroid tissue by determination of jugular venous gradient in patients with negative or discordant preoperative imaging studies, in order to increase the number of patients eligible for unilateral neck exploration (22,23). In this technique, which is positive in 70% to 81% of cases, 3 mL of whole blood is collected under ultrasound guidance from the most caudal portion in the neck of both internal jugular veins, just before skin incision. Intact PTH levels are then measured in both jugular vein samples, as well as in the initially collected sample from the peripheral access (37). The unilateral neck exploration is undertaken on the side of the neck indexed by the highest iPTH value and terminated after successful removal of a hyperfunctioning parathyroid gland using intraoperative iPTH monitoring to assure cure from hyperparathyroid state.

Minimally invasive parathyroidectomy guided by intraoperative PTH monitoring is widely accepted among parathyroid surgeons for the treatment of sporadic primary hyperparathyroidism. This intraoperative adjunct warrants the operation to be a safe, highly successful, less invasive procedure, and is associated with a lower prevalence of morbidity than bilateral neck exploration. Surgical awareness of hormone dynamics during parathyroidectomy and adherence to the sampling protocol and interpretation criteria that best fit the individual practice are crucial in achieving intraoperative confidence in predicting operative success and preventing failure in cases of unsuspected multiglandular disease, while safely limiting neck exploration in the majority of patients with sporadic primary hyperparathyroidism.