Therefore, the strategy of breast cancer with ISLM has always been controversial. At present, there is still a big controversy about whether such patients need supraclavicular lymph node dissection, and the national comprehensive cancer network (NCCN) guidelines do not explicitly recommend. It was found that the survival rate of patients with ISLM was similar to that of patients with stage III B, which was significantly better than that of patients with stage IV. The purpose of this study was to compare the efficacy of supraclavicular lymph node dissection combined with radiotherapy and radiotherapy alone in the conventional treatment mode of neoadjuvant chemotherapy combined with or without targeted therapy, so as to provide basis and new ideas for the choice in the treatment of this type breast cancer patients, and to benefit the survival of patients. We present the following article in accordance with the STROBE reporting checklist (available at http://dx.doi.org/10.21037/gs-20-691).

The Zhengzhou University Institutional Research Committee approved our study, and all patients provided signed informed consent before commencing treatment. The study was conducted in accordance with the Declaration of Helsinki (as revised in 2013). All methods were performed in accordance with t/he relevant guidelines and regulations.

The medical records of primary breast cancer patients from January 2010 to January 2019 were retrospectively reviewed.

A total of 108 patients were enrolled, and were divided into 2 groups based on different treatment for supraclavicular lymph nodes (SLNs): dissection plus radiotherapy group (n=84), and radical radiotherapy group (n=24). The 2 groups were similarly distributed regarding age, sex, tumor stage (TNM), and other clinical-pathologic variables, as shown in Table 1 (all P>0.05). 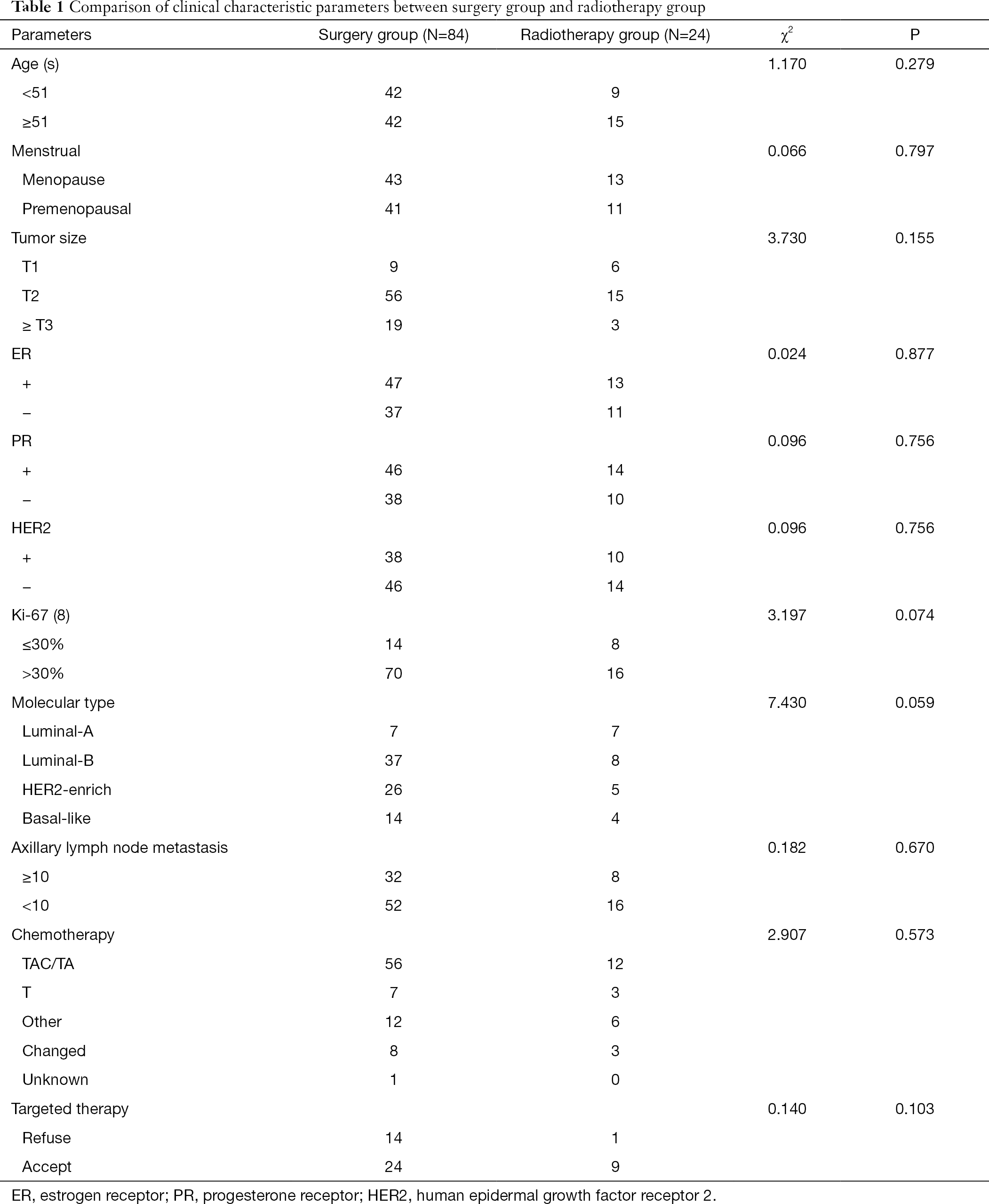 The participants routinely underwent bone scan, ultrasonography, CT (Figure 1), MRI, and/or PET-CT prior to definite treatment. All patients in this study received 4–6 cycles of neoadjuvant chemotherapy mainly anthracycline and docetaxel after pathological puncture confirming ISLM. All patients underwent radical or modified radical mastectomy. Lymph nodes with axillary I, II, and III levels were dissected. Cervical III, IV, and V lymph nodes were dissected in the supraclavicular dissection group. After operation and chemotherapy, the patients received combined extracorporeal radiotherapy of the chest wall, regional lymphatic vessels, and supraclavicular area. The dose of the surgery group was 50 Gy, 25 times for 5 weeks; the dose of radiotherapy group was 60 Gy, 25 times for 5 weeks. All patients with positive hormone receptors received further hormone therapy. There were 15 human epidermal growth factor receptor 2 (HER2)-positive patients (14 cases in operation plus radiotherapy group, and 1 case in the radiotherapy group) who refused to receive targeted therapy because of their economic status, and the rest received targeted therapy regularly (trastuzumab was administered for 1 year, initial dose was 8 mg/kg, subsequent doses were 6 mg/kg, with 3 weeks constituting a course of treatment). 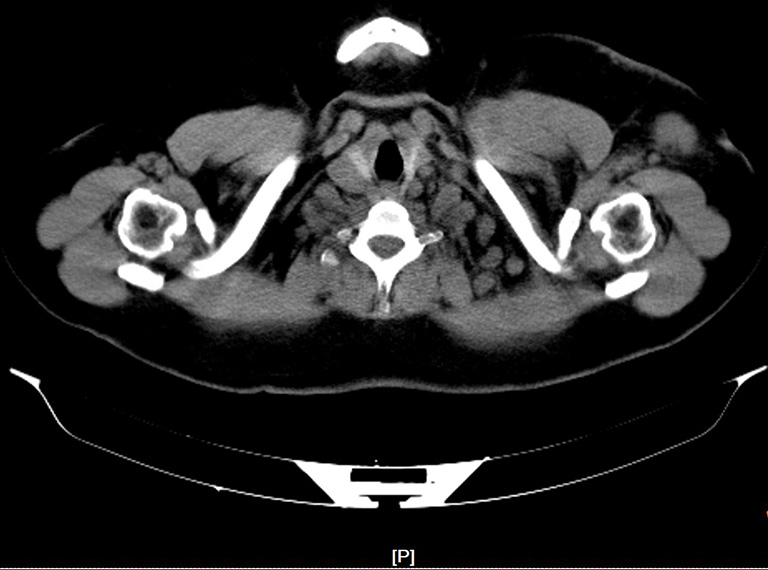 Local recurrence refers to pathological recurrence in the ipsilateral chest wall, supraclavicular and subclavian fossa, and axillary or internal mammary region. Distant metastasis was confirmed by 2 types of medical imaging (and pathological examination if necessary) to confirm that the cancer had spread distal to the local recurrence site. Disease-free survival (DFS) is defined as the time from surgery to recurrence or death due to disease progression. The overall survival time (OS) is defined as the time from the diagnosis of breast cancer to death from whatever cause, regardless of whether the death is associated with breast cancer or not.

The statistical analysis was carried out by SPSS 24.0 software (SPSS Inc., IBM, Chicago, IL, USA); the difference between qualitative data was analyzed by the chi-squared (χ2) and Fisher’s exact probability test; the survival rate was compared by the Kaplan-Meier method; and the survival curve was compared by log-rank test. The significance of the test level was deemed to be α=0.05.

Comparison of 5-year OS and DFS between the two groups 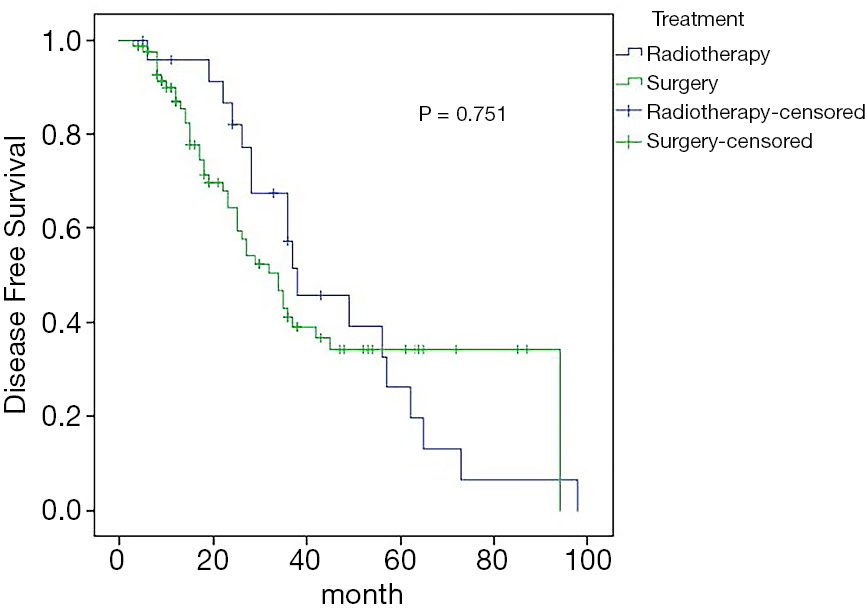 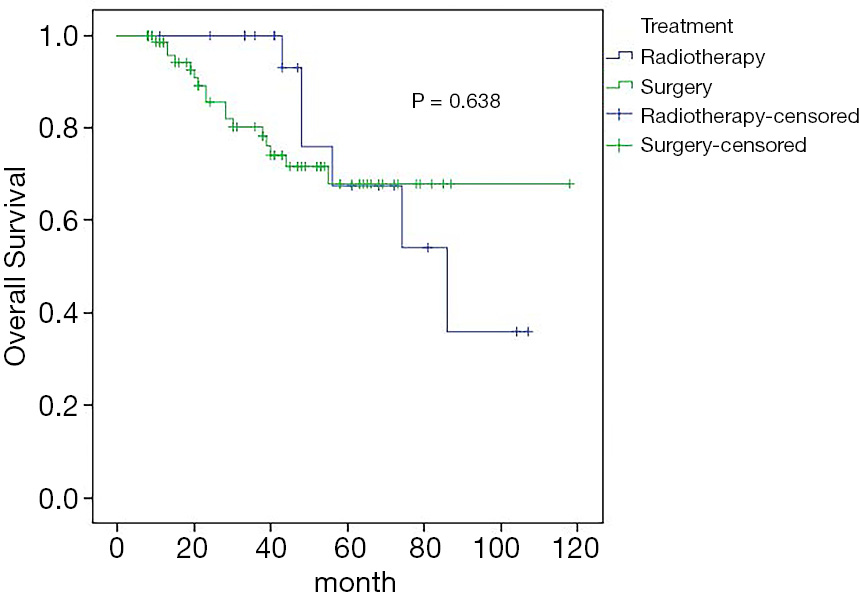 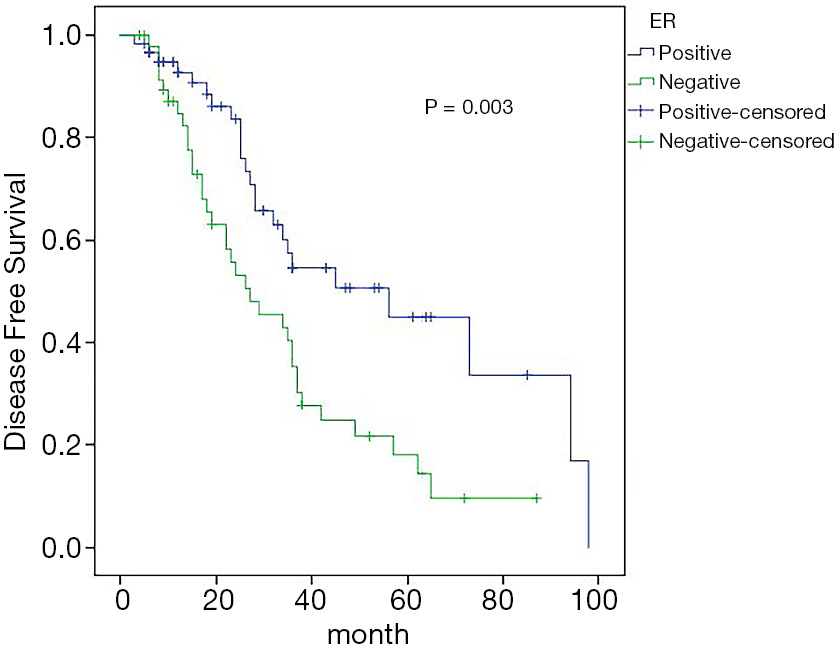 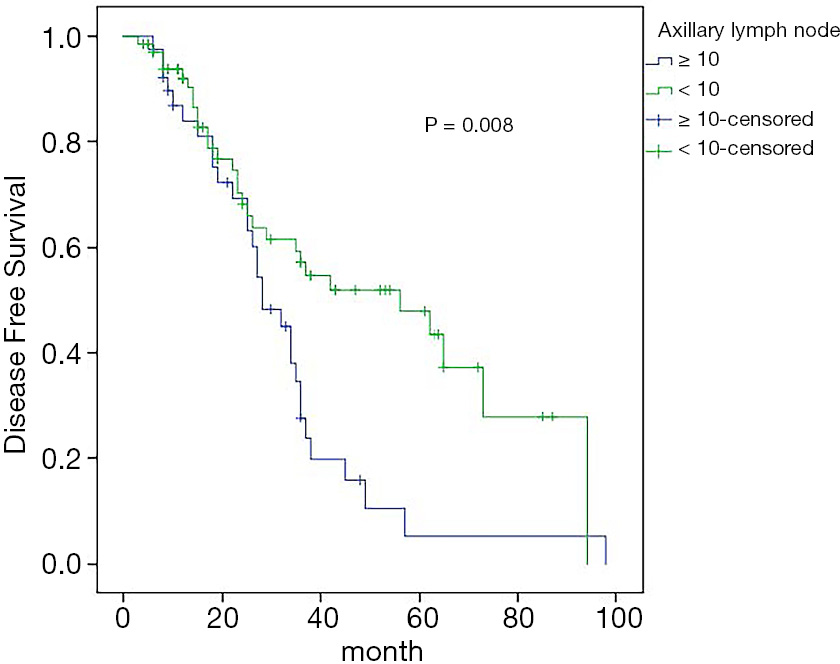 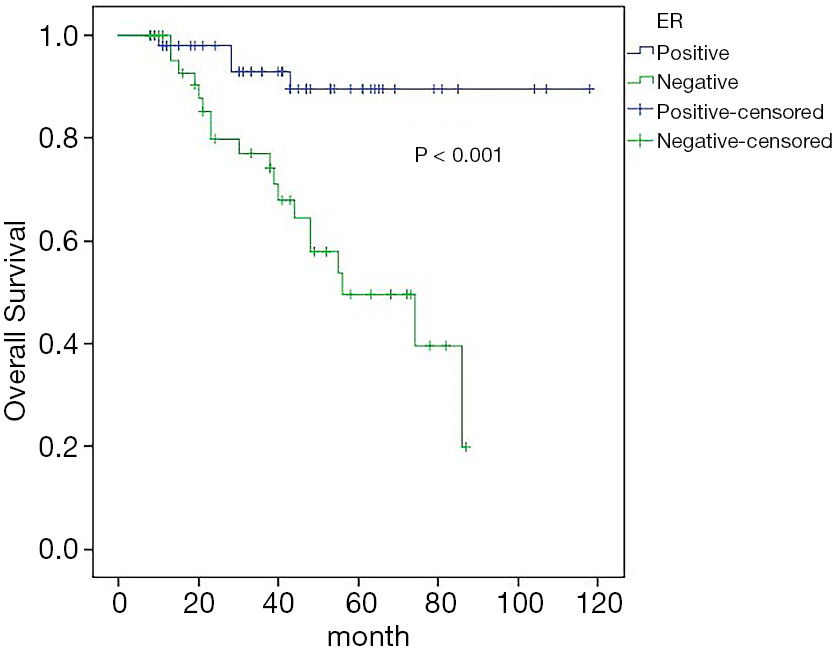 The incidence of breast cancer with ISLM but without distant metastasis is about 1–4% (9), and the prognosis is poor, with a published 5-year OS of 5–34% (10-12). This type of cancer has been previously classified as M1. Recently, Bertero et al. (13) reported that the 5-year OS of synchronous ISLM was 41% after multimode treatment, which was significantly better than that of women with distant metastases. This led to revision of the AJCC staging system to re-classify ISLM as pN3 phase IIIC disease (14). Chang et al. (15) firstly analyzed the clinical value of SLN dissection and radiotherapy in treating patients with ISLM; in the SLN dissection and radiotherapy groups, the 3-year DFS was 46.2% and 31.5%, respectively, and the 5-year OS was 46.2% and 37.5%, respectively, but no significant difference. In the current study, we also noted there was no additional survival benefit associated with surgery. However, Tezuka et al. (16) found that local surgical treatment of ISLM can lead to a good prognosis. In a similar study, local surgery was also shown to be a prognostic factor for OS (17). These findings would suggest that, when radiotherapy could not be provided to patients to maximize local area control, local surgical treatment can be considered. Our 5-year OS rate was higher than that in other studies, which may be related to the improvement of systemic therapy and individualization of treatment.

In the latest international staging systems of AJCC and UICC for breast cancer, ISLM has been divided into locally advanced N3c, but the specific location of metastasis has not been clearly identified. Sesterhenn et al. (18) drew lessons from the anatomical localization of cervical lymph nodes in head and neck surgery in the study of 12 cases of ISLM, and pointed out that the supraclavicular region is relative to the cervical IV (inferior jugular vein) and V region (posterior cervical triangle). The higher position of III and II (upper and middle segment of jugular vein) did not belong to the drainage area of a conventional mammary gland. This classification is significantly better than the classification of SLNs. All lymph node metastases higher than the superior jugular vein should be allocated into M1, which provides a reference for the clinical dissection of SLNs (19). However, because of the special anatomical location of SLNs, radical lymph node dissection is difficult in breast cancer patients with ISLM (20). Therefore, radiotherapy has become the main local treatment of ISLM. The findings of Fan et al. (21) suggested that there was no significant difference in local recurrence rate, supraclavicular recurrence rate, DFS rate, and OS rate 3–5 years after radical radiotherapy. Perloff et al. (22) compared the effects of simple surgery and radiotherapy after neoadjuvant chemotherapy for locally advanced breast cancer. The results showed that there was no significant difference in the local control rate between operation alone and radiotherapy alone.

In summary, although ISLM is considered to be a curable local disease, comprehensive treatment should be provided to ISLM patients, including surgery, radiotherapy, endocrine therapy, targeted therapy, among others. Because the local control in the surgery group was better than that in the radiotherapy group, we conclude that the increasing local surgery can benefit patient survival rates. The status of ER and the number of axillary lymph node metastases were independent influencing factors of DFS. The ER status is an independent factor affecting the OS rate of patients.

Reporting Checklist: The authors have completed the STROBE reporting checklist. Available at http://dx.doi.org/10.21037/gs-20-691

Conflicts of Interest: All authors have completed the ICMJE uniform disclosure form (available at http://dx.doi.org/10.21037/gs-20-691). The authors have no conflicts of interest to declare.

Ethical Statement: The authors are accountable for all aspects of the work in ensuring that questions related to the accuracy or integrity of any part of the work are appropriately investigated and resolved. The Zhengzhou University Institutional Research Committee approved our study, and all patients provided signed informed consent before commencing treatment. The study was conducted in accordance with the Declaration of Helsinki (as revised in 2013).