In the lymphatic drainage of breast cancer (BC), approximately 75% of drainage occurs to axillary lymph nodes (ALN) and 25% of drainage occurs to internal mammary lymph nodes (IMLNs) (1), both of which are the first sites for lymphatic node drainage. Like ALN, IMLN receive the lymphatic drainage from not only the primary tumor area, but also the entire breast organ, the dermal and subdermal lymphatic flow is rarely directed to IMLN, whereas some intraparenchymal lymphatic flow is directed to IMLN (2). Only a small number of breast cancer patients have single IMLN metastasis, majority happen along with ALN metastasis. IMLN metastases occur in 16.7% to 40% of BC cases (3). According to the 2017 American Joint Committee on Cancer Staging Manual, the status of IMLN contributes to BC staging, and is an independent factor associated with a poor prognosis and shorter survival rates of BC (4). Therefore, early detection and accurate evaluation of IMLN is critical to achieving favorable outcomes.

Although IMLN metastasis is clinically diagnosed on ultrasound (US), computed tomography (CT), magnetic resonance imaging (MRI) and positron emission tomography-computed tomography (PET-CT), the optimal imaging methods have not yet been established. One study by Lee et al. reported that the maximum standardized uptake value of IMLNs was greater than that of mediastinal blood pool on PET-CT can indicate IMLN metastasis (5). However, the low spatial resolution of PET/CT limits the diagnosis of small nodal metastases (6). Patel et al. reported that metastatic IMLNs should be considered when more than two ipsilateral IMLNs measuring 6 mm or greater are seen on diagnostic MRI in a patient with newly diagnosed BC (7). Meanwhile, another study by Segaert et al. compared the sensitivity of PET-CT with that of contrast-enhanced CT (8), reporting a 100% sensitivity and 85% specificity for PET-CT and a sensitivity of 67% for contrast-enhanced CT. These showed that correct identification of metastatic IMLN can be currently be performed by using different imaging techniques, US is preferable due to its accuracy, simplicity, and low cost. Few studies, however, have systematically reported the US features of metastatic IMLN. The aim of our study was mainly to explore the US characteristics and diagnostic value in IMLN metastasis. We present the following article in accordance with the STARD reporting checklist (available at http://dx.doi.org/10.21037/gs-20-664).

Between March 2014 and May 2020, 278 patients with BC (median age, 48.1 years; range, 26–79 years) in our hospital were enrolled in our retrospective study. Inclusion criteria: (I) female patients; (II) clear diagnosis of breast cancer; (III) obtain IMLN pathology or ultrasound examination results after chemotherapy. Exclusion criteria: (I) past history of breast cancer; (II) incomplete ultrasound diagnosis information of IMLN. Cases were classified into a metastatic group and non-metastatic group according to IMLN status, histopathological confirmation obtained by fine-needle aspiration (FNA), core needle biopsy (CNB), or excision biopsy. There was no change in the non-metastasis group for more than half a year. The study was conducted in accordance with the Declaration of Helsinki (as revised in 2013). The requirement for patient informed consent and ethic review were waived due to its retrospective nature.

All patients underwent breast and drainage lymph nodes US. The US images were acquired with a L12-5MHz linear array probe from IU22 and eL18-4MHz linear array probe from EPIQ 7 (Phillips Ultrasound, Inc., Bothell, WA, USA). With the use of transverse and longitudinal plane scans along the sternal border, IMLN was located around the internal mammary artery (IMA) and internal mammary veins (IMVs) in the intercostal space (ICS). If any suspicious IMLNs were detected, the gray scale and color Doppler US features of IMLN were observed and recorded, including size (long diameter, short diameter), location (intercostal distribution), number (single or multiple), shape, echo, and blood flow (none, punctiform, strip, plentiful). All IMLNs were divided into four types according to their structural features: type I (preserved lymphatic hilar structure, without cortical thickening) (Figure 1A), type II (local soft tissue thickening ≥6 mm, with or without nodular occupying effect), type III (preserved lymphatic hilar structure and thickened-cortex), and type IV (hypoechoic nodules with unclear lymphatic hilar structure). Type II–IV suggested possible metastasis (Figure 1B,C,D,E,F). The images were retrospectively reviewed by two experienced sonographers and US-guided fine-needle aspiration (US-FNA) or core-needle biopsy (US-CNB) was performed by experienced and skilled sonographers. 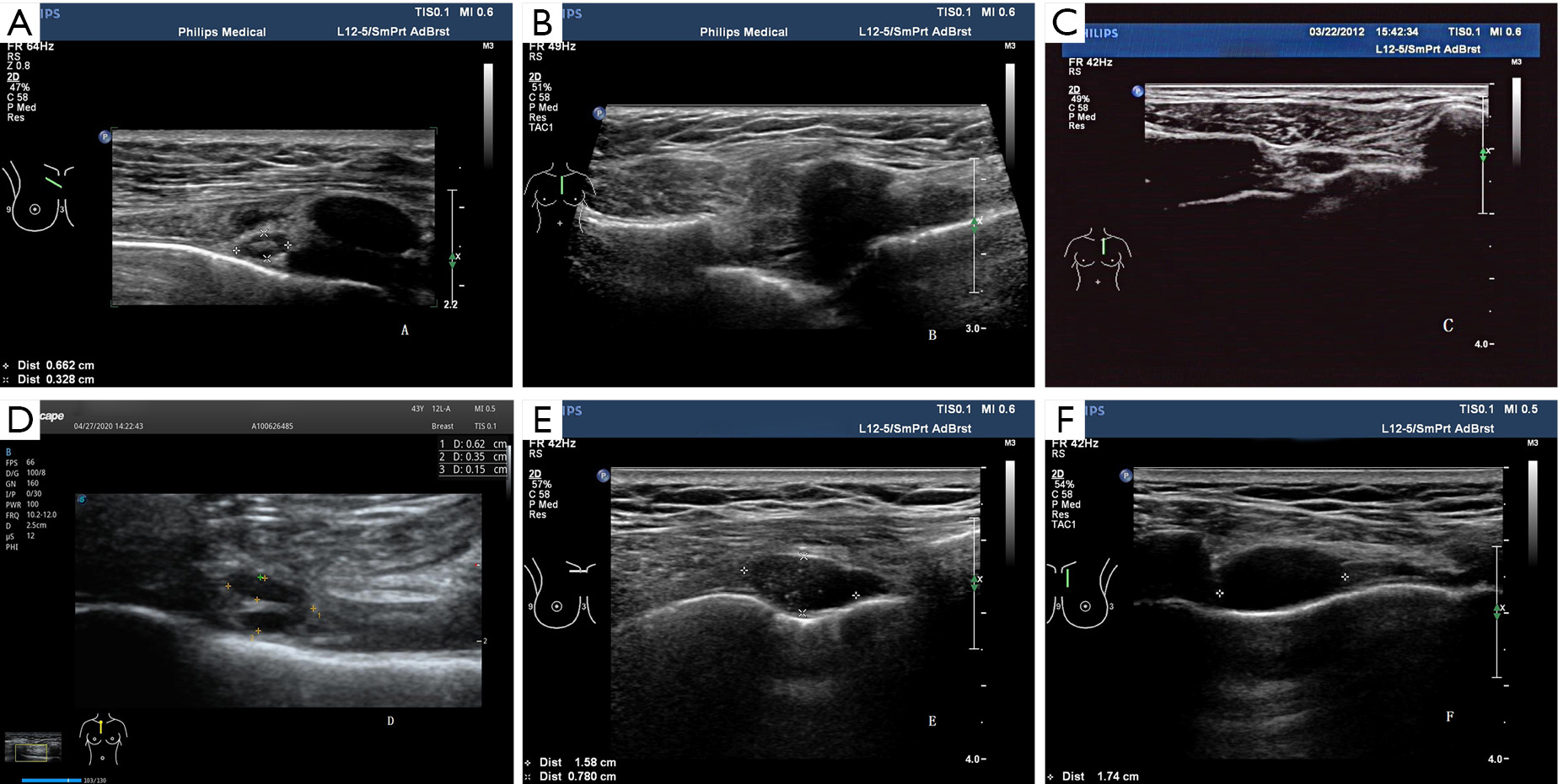 The Chi-square test was used to evaluate nonparametric variables between groups, while the independent t-test was used for parametric variables. The cutoff values for long diameter, short diameter, and cortical thickness were determined from the receiver operating curve (ROC) analysis. The most suitable cutoff point was defined as the value corresponding to the highest average of the sensitivity and specificity. Diagnostic indices included the sensitivity, specificity, positive predictive value, and negative predictive value. Statistical significance was assigned to a P value <0.05. All statistical analyses were performed using SPSS software (Version 21.0).

Between March 2014 and May 2020, 278 patients with BC (median age, 48.1 years; range, 26–79 years) were enrolled in our retrospective study and assigned to the metastatic group (n=224) or the non-metastatic group (n=54). All patients were females. The locations of their primary breast tumor were as follows: 133 cases in the outer quadrant, and 145 cases in the inner quadrant and central quadrant (the huge tumor belonging to the central quadrant). The mean size of tumors was 4.1 cm (range, 0.8–18 cm).

The status and characteristics of IMLNs (Table 1) 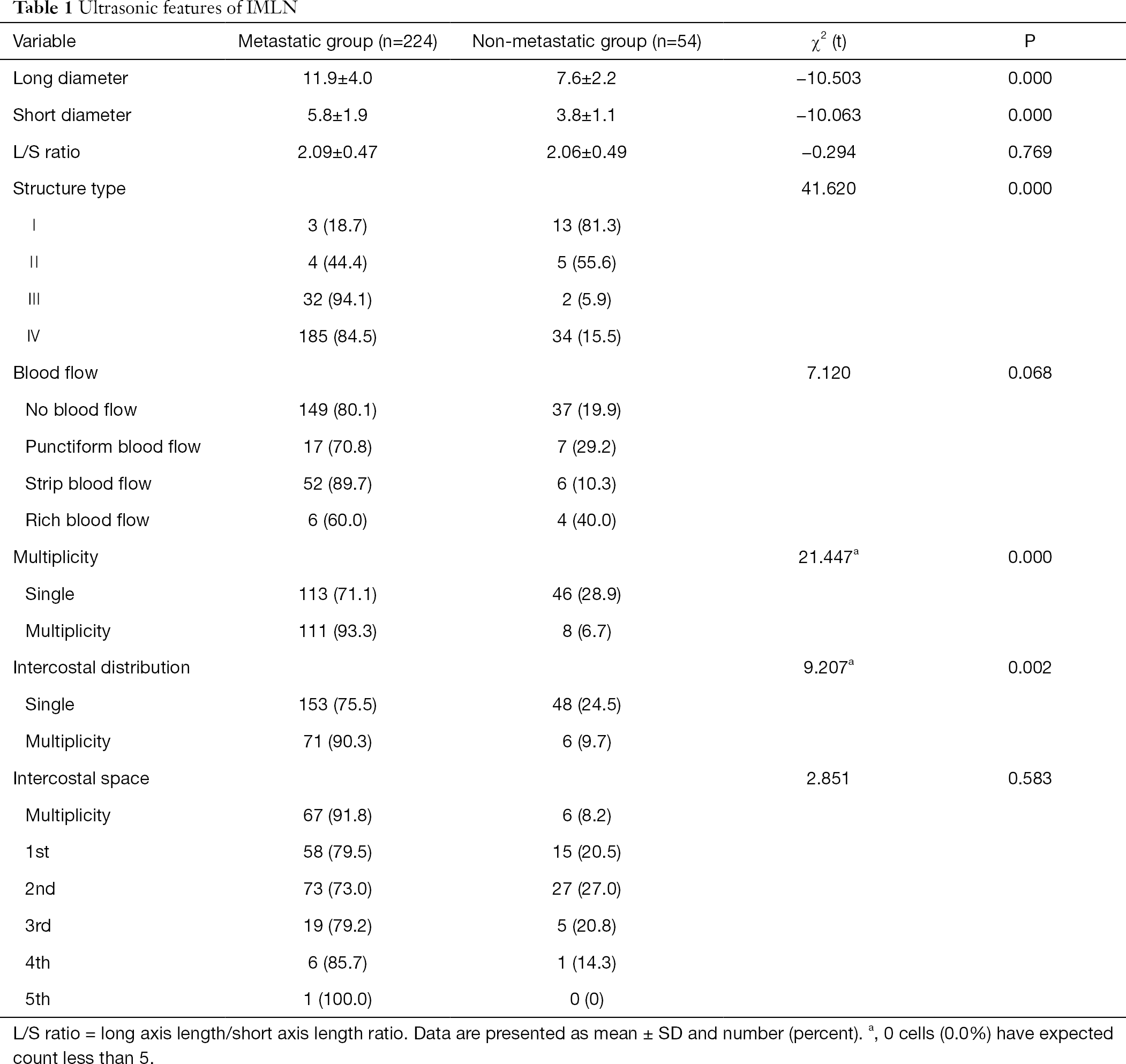 There were significant differences in long diameter, short diameter, numbers, ICS distribution and structure type of IMLNs between the two groups (P<0.05), but no significant differences in the ratio of long to short diameter and blood flow (P>0.05). IMLNs were distributed between the first and fifth ICS, and most commonly located in the first and second ICS, but the occurrence of metastasis across the five ICSs showed no statistical difference (P>0.05).

The diagnostic performance of US in metastatic IMLNs

ROC curve analysis with IMLN long and short diameters as variables yielded an area under the curve (AUC) of 0.828 and 0.823 (Figures 2,3), and cutoff values of 10.5 mm and 4.5 mm, respectively. This study also analyzed the multimodal diagnosis of IMLN size combined structure type, which was defined as a long diameter ≥10.5 mm or a short diameter ≥4.5 mm, with a diagnosis of metastasis when the structure type was type III and type IV. The performance of long-diameter, short-diameter, and multi-modal diagnostics are compared in Table 2. 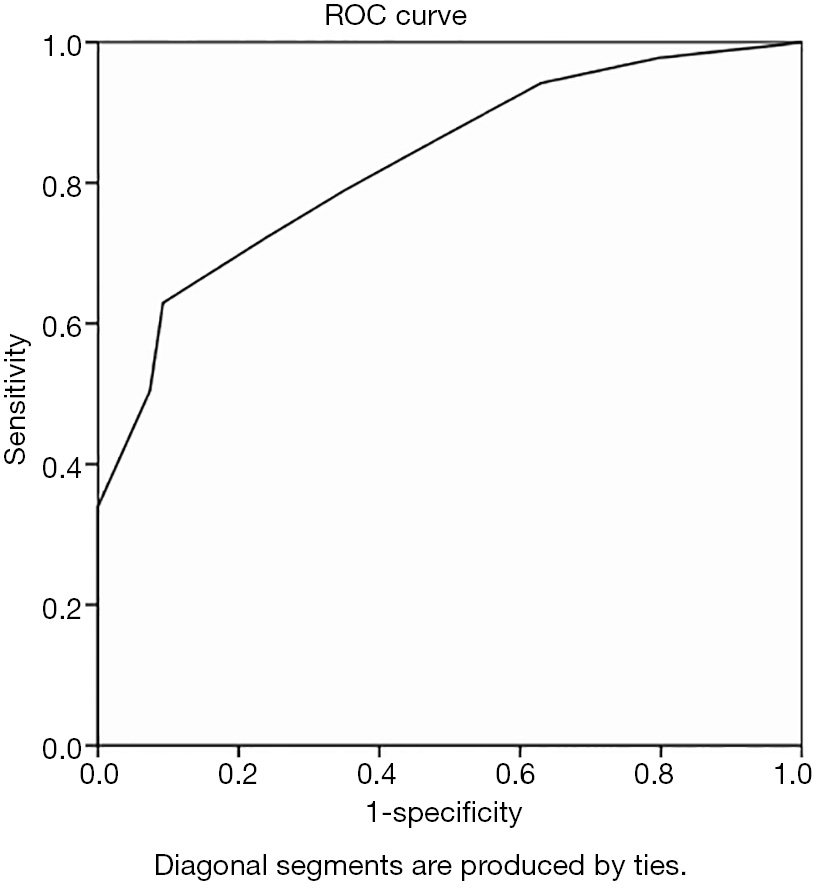 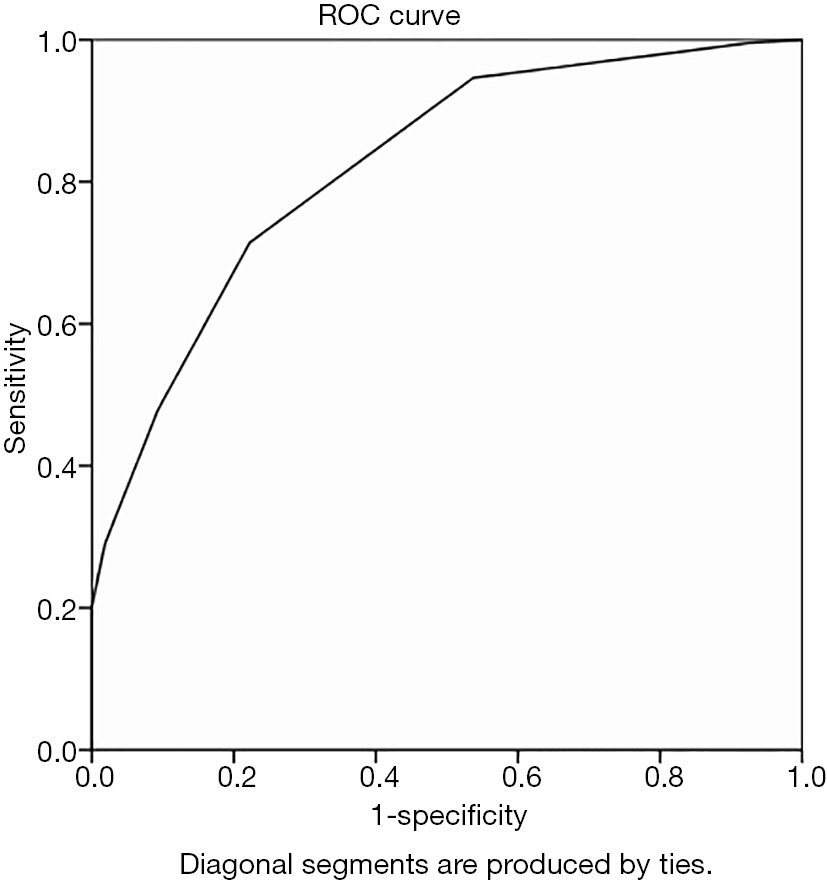 The threshold of cortical thickness of metastatic IMLNs 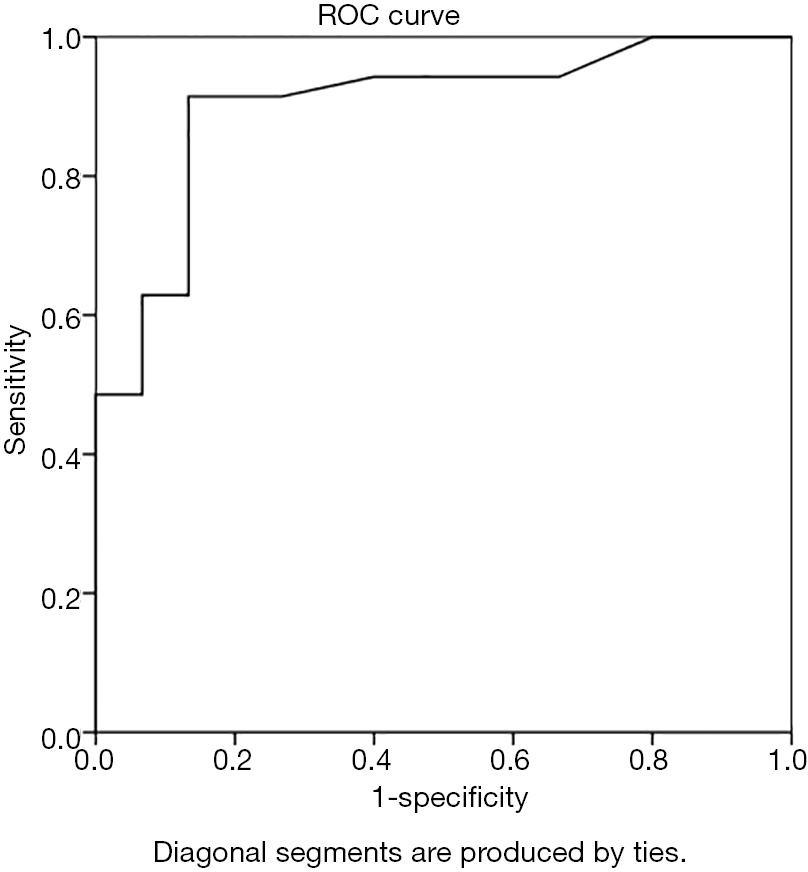 Many studies (5,7) show that the size of the IMLN is an important indicator for diagnosing metastasis. Compared with ALN, the threshold of IMLN for diagnosing metastasis is smaller. One CT study suggests that metastasis can be diagnosed when the lymph nodes increase more than 3–4 mm (11). This study showed that the difference in the long and short diameters of lymph nodes between IMLN metastasis and non-metastasis groups were statistically significant. The long-diameter diagnostic threshold was 10.5 mm and the short-diameter threshold was 4.5 mm. In An et al.’s a study of 35 BCs with IMLN (12), the long-diameter threshold for the diagnosis metastasis by US was 12 mm, the sensitivity was 72.4%, and the specificity was 87.5%, which was greater than the diagnostic threshold of our present study, with the sensitivity and specificity being slightly higher. Meanwhile, Zhao et al. (13,14) reported a normal IMLN long diameter range of 3.0–8.2 mm; as can be seen, the above results are not consistent, and it is not clear whether the smaller diameter can diagnose metastasis. Lee et al. (5) analyzed the MRI characteristics of IMLN metastasis in 59 BC patients, and obtained a short-diameter diagnostic threshold of 4 mm and an AUC of 0.951 which are in line with the results of the present study.

Other research has shown that (5,15) metastatic IMLNs are mostly absent of fatty hilum. In this study, most of the IMLNs detected by US showed low echo node without fatty hilum, and a few showed visible fatty hilum, cortical thickening, both of which have a high IMLN metastasis rate; however, thickened-soft tissue seems have a low metastasis rate of type II (44.4%). In addition, this study found that IMLN structure type combined with long or short-diameter multimodal diagnosis is more accurate, sensitive, and specific than long- or short-diameter diagnosis alone.

US shows a thickened-cortex of ALN of ≥3 mm, which may indicate the risk of lymph node metastasis. This study shows that, compared with ALN, the defined value of IMLN thickened cortex is smaller. IMLN cortical thickness ≥1.9 mm is considered to be a thickened-cortex, which can, with better sensitivity and specificity, indicate metastasis. The difference between ALN and IMLN may be caused by the size of IMLN being smaller. However, the lymphatic drainage of BCs may change after surgery, and there may be aseptic inflammatory change in the chest wall, resulting in uniform thickening of the cortex during reactive hyperplasia of IMLN. At this time, attention should be paid to discriminate reactive hyperplasia and metastasis.

The traditional view is that metastatic lymph nodes appear to be round. This study shows that the long/short (L/S) ratio of the IMLNs in the metastasis group was slightly larger than those of non-metastasis group, but the difference was not statistically significant. In a study by Cheon et al. (15), 49 metastatic IMLNs had an L/S ratio ≥1.5, accounting for 71.4% of the cases examined, which is consistent with the conclusion of this study. They all showed that the metastatic IMLNs are not necessarily round (15), and that the proportion of elliptical IMLNs may even be greater than round. In other lymph nodes, it indicates metastasis when the node is round, but the IMLN is different from other nodes according this study, which might have been due to the special position of IMLNs between the intercostal muscles and pleura. Of course, it may also be related to the small number of non-metastatic patients in this study, which should be reviewed in more depth.

There are some limitations to this study. Because most of the IMLNs found by US are positive, the number of negative patients in our study was small.

In conclusion, high-frequency US has a high application value in diagnosing metastatic IMLNs. When the long diameter of IMLNs is ≥10.5 mm or the shorter diameter is ≥4.5 mm, and thickened-cortex is ≥1.9 mm or fatty hilum is absent, metastasis is highly indicated. Furthermore, multiple IMLNs detected in the same or multiple ICSs, may be helpful in determining metastatic status. In clinic, diagnostic consideration should take into account a comprehensive array of factors.

Reporting Checklist: The authors have completed the STARD reporting checklist. Available at http://dx.doi.org/10.21037/gs-20-664

Conflicts of Interest: All authors have completed the ICMJE uniform disclosure form (available at http://dx.doi.org/10.21037/gs-20-664). The authors have no conflicts of interest to declare.

Ethical Statement: The authors are accountable for all aspects of the work in ensuring that questions related to the accuracy or integrity of any part of the work are appropriately investigated and resolved. The study was conducted in accordance with the Declaration of Helsinki (as revised in 2013). The requirement for patient informed consent and ethic review were waived due to its retrospective nature.