Freeman introduced immediate breast reconstruction after mastectomy with preservation of the nipple-areola complex (NAC) in 1962 in a case series of reconstructions after subcutaneous mastectomies for benign breast disease (1). Historically, subcutaneous mastectomy often left significant breast tissue within the skin flaps and at the base of the NAC. This concept was not ideal for prophylaxis or breast cancer treatment and had questionable oncologic safety (2). In the 1990s and 2000s, nipple-sparing mastectomy (NSM) and immediate breast reconstruction was gradually introduced. This method gained popularity for both therapeutic and prophylactic indications based on oncologic and surgical safety evidence and superior cosmetic outcomes (2-5). Preservation of the NAC in NSM indicates that this procedure is both the most conservative mastectomy method and also the most aesthetically appealing as it ensures a natural-appearing nipple (6).

Several different incision types have been suggested for NSM (e.g., inframammary fold, radial, periareolar, transareolar, reduction/mastopexy). Among them, periareolar incision provides advantages of a well-hidden incision scar within the periphery of the NAC and central access to all breast quadrants during mastectomy (7). Furthermore, postoperative NAC malpositioning can be minimized, unlike with radial incisions. Despite these advantages, some surgeons are reluctant to choose periareolar incision, mainly due to the potential high rate of postoperative nipple necrosis (8,9).

Studies have shown that intraoperative use of indocyanine green (ICG) angiography identifies areas of decreased perfusion and predicts mastectomy skin flap necrosis (10-14). Recently, Bilezikian et al. reported that prepectoral direct-to-implant (DTI) reconstruction can be safely performed in postmastectomy patients using ICG angiography and extended use of acellular dermal matrix (15). In this study, we present initial results of DTI breast reconstructions with acellular dermal matrix after NSM using pure hemi-periareolar incision with intraoperative ICG angiography. The secondary objective was to identify predictors for NAC necrosis by analyzing ICG angiographic perfusion images of the NAC. We present the following article in accordance with the STROBE reporting checklist (available at http://dx.doi.org/10.21037/gs-20-506).

Prospectively recorded data from consecutive patients who underwent immediate DTI reconstruction with an acellular dermal matrix after NSM at our institution between December 2018 and February 2020 were retrospectively reviewed. The study was approved by the Institutional Review Board of Ewha Womans University Mokdong Hospital (IRB No. 2020-03-028) and performed in accordance with the principles of the Declaration of Helsinki (as revised in 2013). Individual consent for this retrospective analysis was waived. Patients who were followed up for at least 1 month postoperatively were included. Patients who had a previous breast procedure, including breast conserving surgery for previous malignancy, augmentation mammoplasty, mastopexy, and reduction mammoplasty, and a history of radiation therapy were excluded from this study. Three experienced oncologic surgeons with over 10 years of experience performed mastectomy, and the senior author (KJW) performed reconstructions.

Electrocautery dissection was used for all mastectomy procedures, and endoscopic devices were not used. The extent of dissection for mastectomy did not exceed the inframammary fold inferiorly, and sizable intercostal perforators at the 2nd or 3rd intercostal spaces were preserved medially to minimize necrosis of the mastectomy skin flap. After mastectomy, a breast sizer of similar size to the mastectomy specimen was temporarily placed in the mastectomy pocket. While the temporary sizer was in place, nipple perfusion was evaluated using a near-infrared camera (Moment K; IANC&S, Seoul, Korea). After administering 12.5 mg of ICG (25 mg ICG mixed with 5 mL normal saline, Dongindang Pharm., Siheung, Korea) followed by a 10 mL saline flush, video recordings were obtained from when fluorescence was started to visualize the mastectomy skin flap. Recordings continued for 180 seconds. DTI reconstruction proceeded if any fluorescence was observed in the lateral half of the areola (at least 50% of areola) by ICG angiography. In patients who could not afford a large acellular dermal matrix, had a thin mastectomy skin flap which can cause significant rippling, or had decreased areolar perfusion by ICG angiography, the implant was placed in the subpectoral space. An acellular dermal matrix (human cadaveric) was used for inferior and lateral support and implant coverage. Otherwise, implants were completely wrapped with the 16 cm × 16 cm or 18 cm × 18 cm acellular dermal matrix (human cadaveric), and the wrapped implant was placed in pre-pectoral spaces without suture fixation. Two closed suction drains were placed in the subpectoral and prepectoral spaces for subpectoral reconstruction and in the upper and lower pole of the prepectoral spaces for prepectoral reconstruction. Partial trimming of the areola for a width of 1 to 5 millimeters was determined by ICG angiographic findings, and mastectomy skin flaps with a width of 1 millimeter were performed in a routine manner to avoid compromised skin margins. Drains were removed when the drainage amount was less than 30 mL over 24 hours for two consecutive days. Prophylactic antibiotics were administrated until drain removal.

Mean and standard deviation were used to summarize continuous variables, and frequency and proportion were used to demonstrate categorical variables. Clinical and operative variables were compared between groups using two-sample t-test or Mann-Whitney U test for continuous variables and Fisher’s exact test and linear-by-linear association test for categorical variables. The selection of statistic test was based on the results of normality test. Binary logistic regression analysis was performed to analyze the effect of each clinical variable on binary outcomes. Variables with P<0.20 in univariable analysis were entered into a multivariate analysis. Multivariate analysis was performed using stepwise logistic regression, and adjusted odd ratios were reported with 95% confidence intervals. Statistical significance was determined by P<0.05. All analyses were performed using SPSS version 23.0 (SPSS Inc., Chicago, IL, USA). 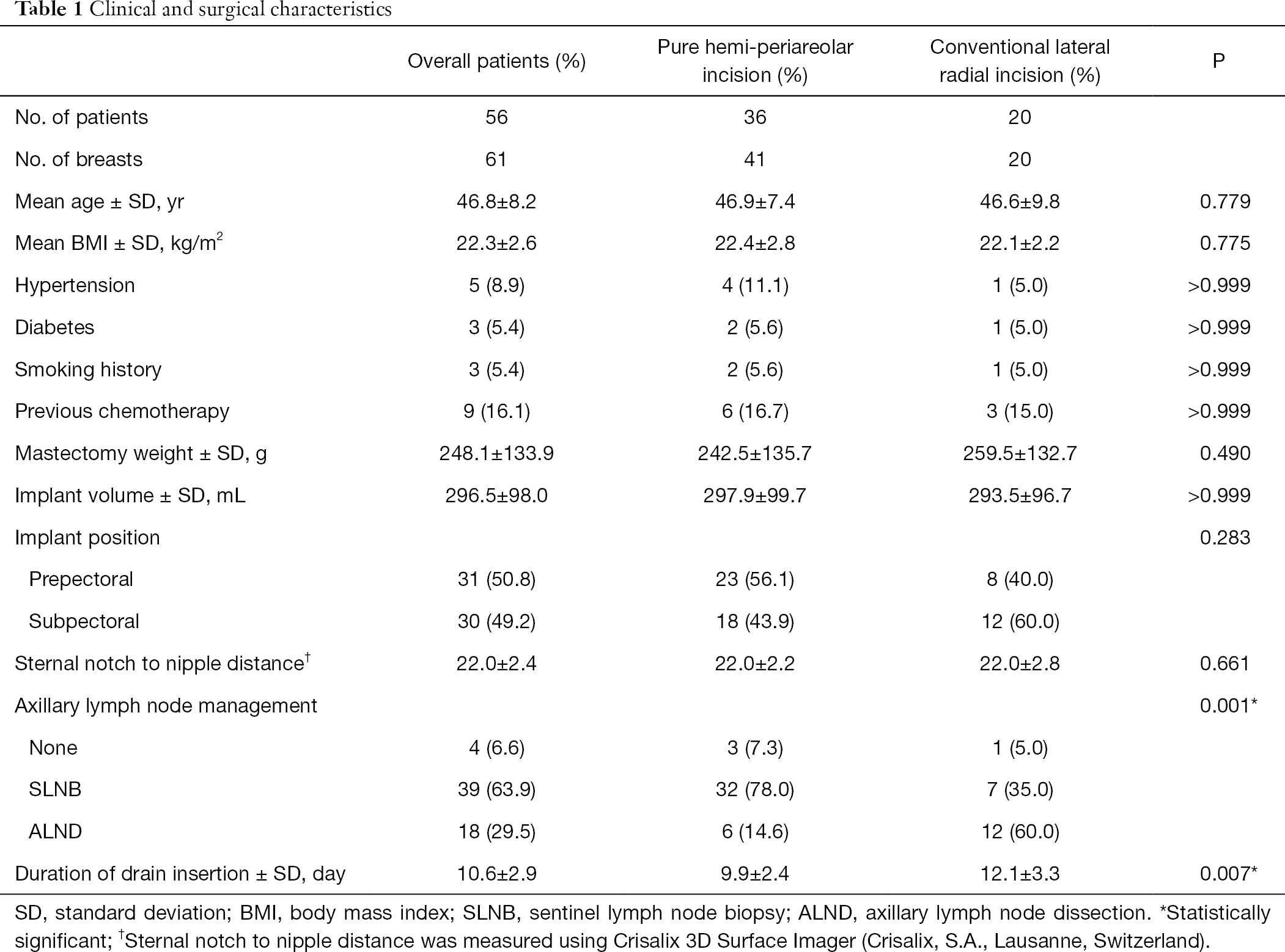 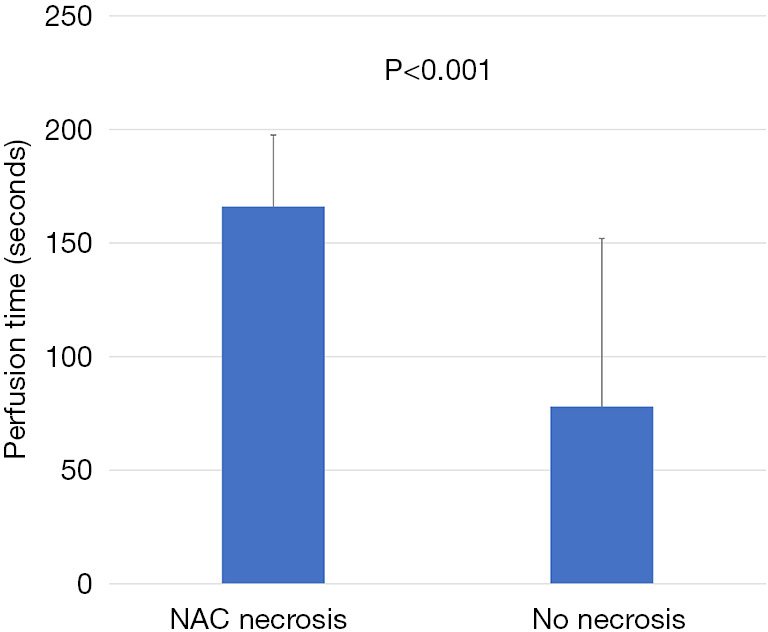 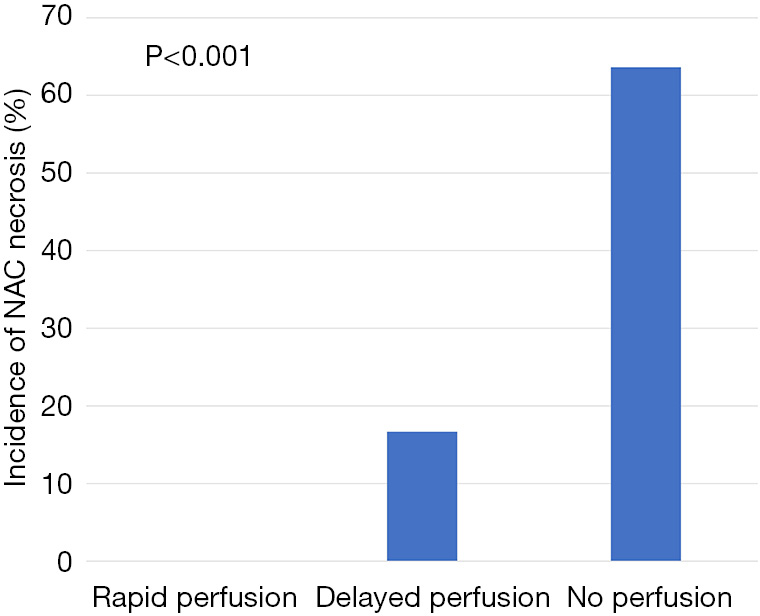 Figure 3 In analysis of perfusion pattern, significant differences in incidence of NAC necrosis were observed among rapid, delayed, and no perfusion groups (0/17, 2/15, and 7/9 breasts, respectively; P<0.001). NAC, nipple-areola complex. 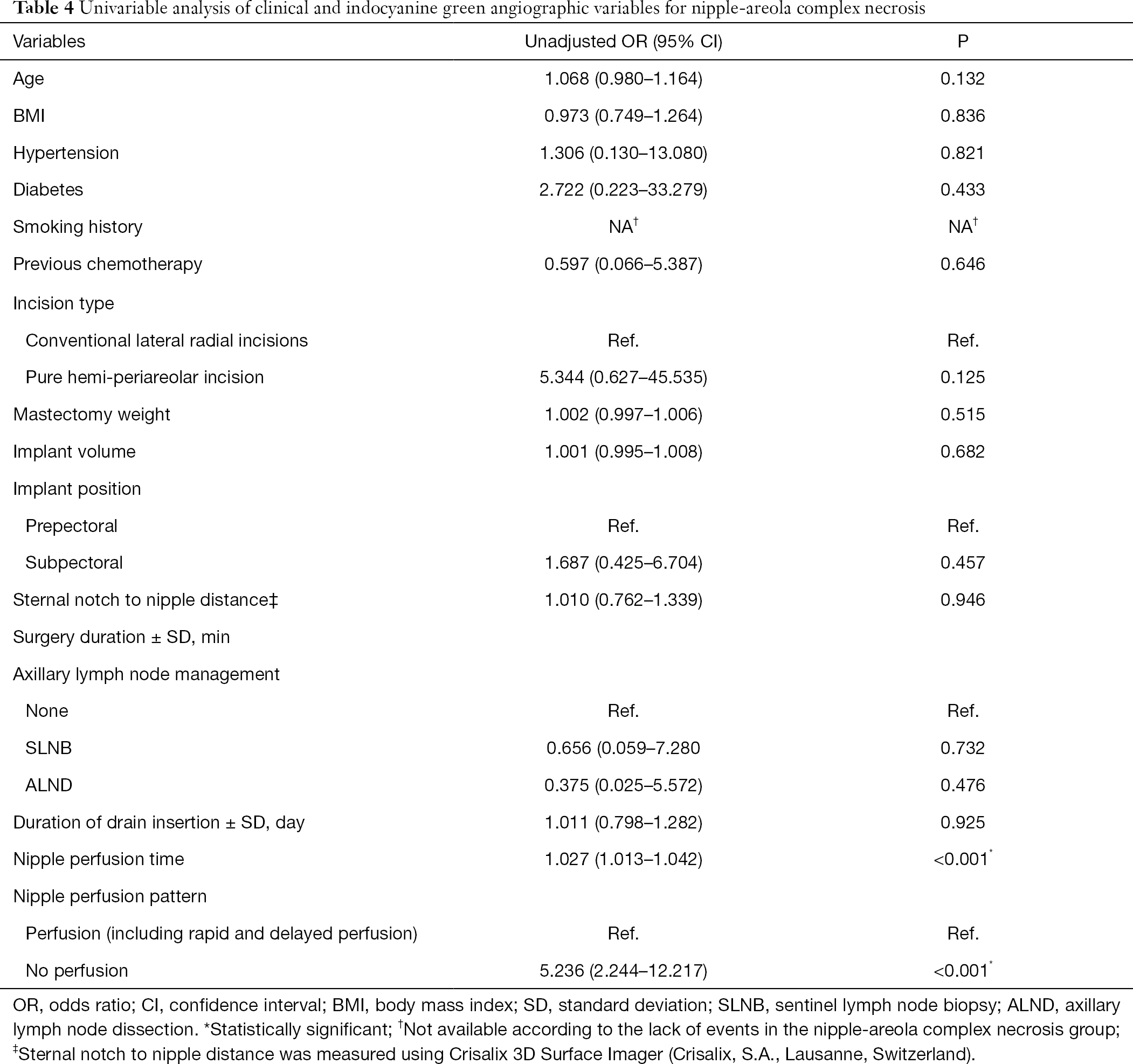 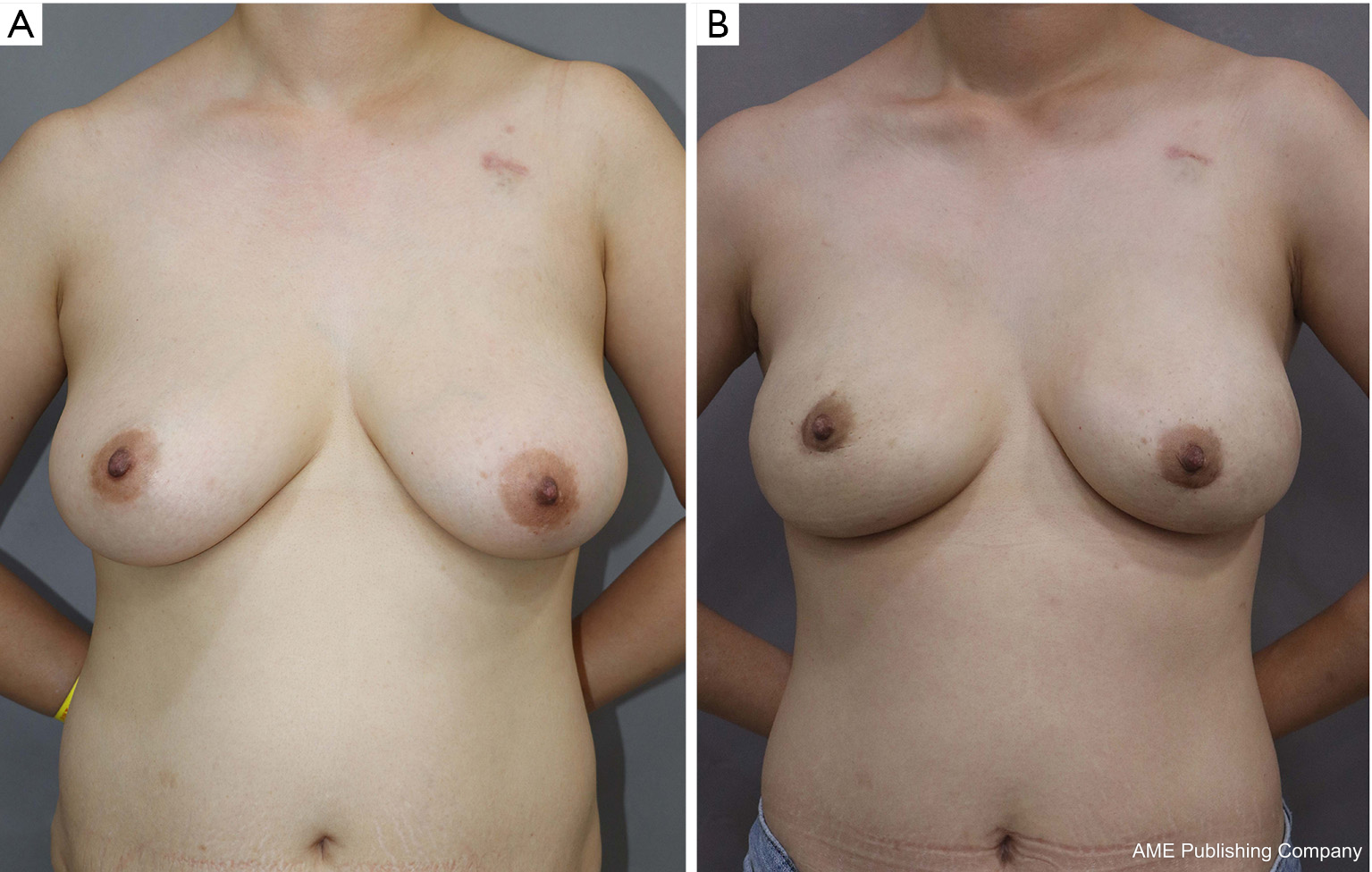 We demonstrated the surgical outcomes of DTI breast reconstructions after NSM using pure hemi-periareolar incision without extension. Complications of the mastectomy skin flap were minimized with intraoperative evaluation of mastectomy skin flap circulation by ICG angiography. In the pure hemi-periareolar incision group, full-thickness necrosis of the NAC was observed in only 2.4% of cases (1/41 cases) and all 8 cases of minor necrosis (19.5%) healed spontaneously with conservative management. By using pure hemi-periareolar incisions, each procedure achieved dual aims of extirpative surgery and breast reconstruction. All four quadrants of the breast and axillary lymph nodes were adequately accessed when performing extirpative procedures for breast cancer because of central access provided by the incision. For breast reconstruction, visible scar was minimized and nipple malpositioning could be prevented, which can result from scar contracture in radial incisions.

Several incision methods have been suggested for NSM, including radial, inframammary fold, periareolar, transareolar, and reduction/mastopexy incisions. The inframammary fold incision is currently gaining popularity for several advantages, including direct visualization and tailoring of the inframammary fold, less tension on incision edges with retraction, and acceptable incision scar (9). However, adequate access to the upper breast pole is more challenging via inframammary incision, and long incision is usually required for oncologic resection (9,18). Furthermore, a separate axillary incision for axillary lymph node dissection along with the long inframammary fold incision may cause perfusion-related complications in the inferior mastectomy skin flap and NAC (19,20). Conversely, periareolar incisions provide central access to all breast quadrants during mastectomy and, when necessary, to the axilla for sentinel lymph node biopsy and axillary dissections (17). Furthermore, the scar can be well-hidden within the periphery of the areola because of different color and texture of the areola and surrounding skin. However, the main disadvantage of the periareolar incision is the high rate of nipple-areola necrosis, which ranged from 9% to 29% in a meta-analysis (9). To minimize the risk of nipple-areola necrosis after mastectomy using peri-areolar incision, intraoperative assessment of ICG angiography was performed to aid decision making for reconstruction. This included whether to proceed with the reconstructive procedure, determination of surgical plane for implant placement, and amount of partial trimming for circulation-compromised areolar skin.

Conversely, time-related variables, such as perfusion time, rate of increase, and perfusion velocity, have rarely been investigated. Erni et al. observed significant reduction in the perfusion velocity of microcirculation of the ischemic flap at 1 hour after surgery using an extended flap model in the experimental setting (27). In a retrospective study of ICG angiographic evaluation of the mastectomy skin flap after immediate tissue expander reconstruction, Gorai et al. showed that the rate of increase to reach maximum perfusion is a more sensitive parameter than fluorescence intensity (24). In this study, we demonstrated that perfusion time was significantly increased in the NAC necrosis group compared to the no necrosis group, and the rates of NAC necrosis were significantly different between the three groups with different perfusion velocity, including rapid, delayed, and no perfusion. Time-related measurements have several advantages. These measurements can be easily applied to clinical settings, and the results can be compared to measurements of another instrument without a correlation process. Time-related measurements do not require a reference value, whereas fluorescence intensity does usually require a reference value. In addition, the reference value is variable and unpredictable in circulatory compromised mastectomy skin flaps (21). Finally, the measurements do not require special equipment or software to quantify fluorescence and only require an ICG camera. We believe that time-related measurements, such as perfusion time, rate of increase, and perfusion velocity, are suitable indictors for perfusion of mastectomy skin flap and NAC.

The current study had several limitations. Other variables that may affect outcomes were possibly omitted due to the retrospective study design. For example, core temperature of patients and environment temperature were not measured when performing ICG angiography, but these temperatures could affect peripheral circulation and measurements of ICG angiography. Breast measurements such as sternal notch to nipple distance and degree of ptosis could also be associated with NAC necrosis because NAC perfusion after NSM is dependent only on the skin flap perfusion and a greater distance from the chest wall to the nipple could increase NAC necrosis (28-30). According to the result of this study, sternal notch to nipple distance was not a significant predictor for NAC necrosis. However, the result needs further validation because sternal notch to nipple distance was obtained retrospectively using an automated 3D program in a relatively small number of study population in this study. The small number of cases included in this study is another limitation. Major NAC necrosis was not significantly different between the pure hemi-periareolar incision and conventional lateral radial incision groups, but only 1 patient in each group developed major necrosis. Further larger studies are warranted to confirm that DTI reconstruction after mastectomy using pure hemi-periareolar incision is feasible for breast reconstruction. Finally, the study population was limited to Asian women. Relatively low BMI and low mastectomy specimen weight might be associated with favorable outcomes. We believe that pure hemi-periareolar incision is feasible for large breasts (up to 738 g in this series) as well, but further studies in patients with relatively large breasts are necessary.

DTI breast reconstruction after NSM using pure hemi-periareolar incision can be safely performed with intraoperative evaluation of the mastectomy skin flap by ICG angiography. Nipple perfusion time and patterns suggested in this study may be useful predictors for NAC necrosis.

We would like to thank EssayReview (www.essayreview.co.kr) for English language editing.

Reporting Checklist: The authors have completed the STROBE reporting checklist. Available at http://dx.doi.org/10.21037/gs-20-506

Conflicts of Interest: All authors have completed the ICMJE uniform disclosure form (available at http://dx.doi.org/10.21037/gs-20-506). The authors have no conflicts of interest to declare.

Ethical Statement: The authors are accountable for all aspects of the work in ensuring that questions related to the accuracy or integrity of any part of the work are appropriately investigated and resolved. The study was approved by the Institutional Review Board of Ewha Womans University Mokdong Hospital (IRB No.: 2020-03-028) and performed in accordance with the principles of the Declaration of Helsinki (as revised in 2013). Individual consent for this retrospective analysis was waived.