Well-differentiated thyroid carcinoma (WDTC), comprising the majority of thyroid cancers, includes papillary thyroid carcinoma (PTC) and follicular thyroid carcinoma (FTC). Although thyroid cancer is generally an indolent disease that has a much lower mortality rate than other solid organ cancers (1), about 2,000 deaths from thyroid cancer occur in the USA annually (The American Cancer Society’s estimates for thyroid cancer in the United States for 2020, www.cancer.org). Distant metastasis is the leading cause of cancer-related death and occurs in 1–3% of the WDTC patients at the initial diagnosis and in 6–23% of the cases during the follow-up period after surgery (1-4). The pathologic parameters associated with the distant metastasis are aggressive histologic variants, large tumor size, lateral lymph node metastasis, and extensive vascular invasion (1,5,6). The presence of TERT promoter mutations is strongly associated with distant metastasis in patients with WDTC (7-10).

This study aimed to investigate the prognostic significance of late-onset of distant metastasis and identify the clinicopathological and molecular features for predicting the prognosis of WDTC patients with distant metastasis. We present the following article in accordance with the STROBE reporting checklist (available at http://dx.doi.org/10.21037/gs-20-416).

This retrospective study was approved by the institutional review board of Seoul St. Mary’s Hospital of the Catholic University of Korea (KC16SISI0709) and conducted in accordance with the Declaration of Helsinki. Informed consent was obtained from each patient included in the study.

We retrospectively reviewed 57 WDTC patients with distant metastases who were treated at Seoul St. Mary’s Hospital between 2006 and 2019. The same data set was used in our recent study (14), but clinical follow-up data were updated as of March 2020.

Refractoriness to RAI therapy was defined as at least one of the following four criteria (15): (I) the presence of at least one distant lesion with no detectable RAI uptake, (II) progressive disease despite previous RAI treatment and confirmed uptake, (III) progressive disease within 1-year after RAI therapy, and (IV) persistent disease after the administration of a cumulative dose of RAI ≥600 mCi.

Genomic DNA was isolated from the paraffin-embedded tumor tissue blocks of 36 primary thyroid tumor tissues and 21 metastatic lesions. Sanger sequencing for the BRAF (codon 600), three types of RAS [NRAS, HRAS, and KRAS (codons 12, 13 and 61)] genes, and TERT promoter (124 and 146 bp upstream of the translation start site) was performed as previously described (17-20).

The statistical significance of the categorical variables was tested with a Chi-squared or Fisher’s exact test. The cancer-specific survival (CSS) time was defined the survival time in the absence of cancer-related death and calculated from the onset of distant metastasis. The Kaplan-Meier method was used to plot the CSS curves. Statistical differences between the curves were tested by the log-rank test. Cox proportional-hazards model was used to analyze the multivariate-adjusted hazard ratios (HRs) and 95% confidence intervals (CIs) of the predictive variables in terms of CSS. Statistical analyses were performed using SPSS (version 21.0, IBM Corp, Armonk, NY, USA). Survival curves were generated using GraphPad Prism (version 6.05, GraphPad Software, La Jolla, CA, USA). P values of less than 0.05 were considered statistically significant. 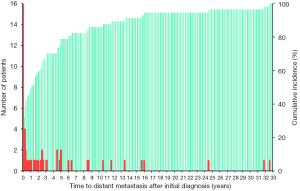 The median follow-up of all patients after the diagnosis of distant metastases was 48 (range, 3–143) months. Of 57 patients, 21 (40%) were refractory to RAI and nine (16%) died of thyroid cancers during the follow-up, while no deaths occurred in RAI-responsive patients. The 5- and 10-year CSS rates after the diagnosis of distant metastasis were 86% and 57%, respectively. 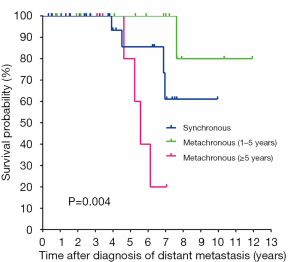 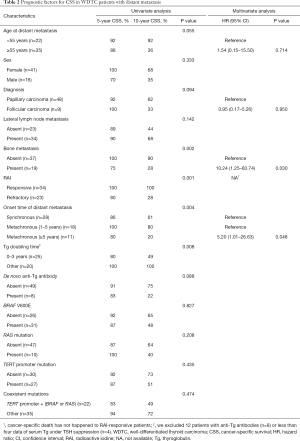 WDTC can dedifferentiate to poorly differentiated and anaplastic thyroid cancer via the acquisition of additional mutations and epigenetic alterations (22-24). WDTC can also behave aggressively without any components of high-grade or dedifferentiated histologic features (22). Patient age is an important prognostic factor for CSS in WDTC (25). Mutation frequency and density in PTC increases with the age of the patients (26). TERT promoter mutations are more frequently found in WDTC patients of older age and associated with distant metastasis, advanced cancer stage, and cancer-specific mortality (24,27). In our study, patients with late-onset (≥5 years) metachronous distant metastases were older and had a higher rate of TERT promoter mutations (73% vs. 41%) at the diagnosis of metastatic cancer than those with synchronous or early-onset metachronous distant metastases. These findings may be associated with worse clinical outcomes of patients with late-onset (≥5 years) metachronous distant metastasis.

Most patients with thyroid cancer present with localized (confined to the thyroid) or regional (spread to regional lymph nodes) disease. According to the Surveillance, Epidemiology, and End Results (SEER) Cancer Statistics Review from 1975 through 2017 in the USA, the 5-year conditional relative survival rates for localized and regional thyroid cancer at the time of diagnosis are 99.9% and 97.8%, respectively, but fall to 54.8% when distant metastasis is present at diagnosis (32). In our study, the 5- and 10-year CSS rates for WDTC with synchronous distant metastasis were 86% and 61%. The results are consistent with a recent multicenter study performed in Korea, wherein the 5- and 10-year CSS rates for patients with WDTC and initial distant metastasis were 85% and 68% (33). The difference in the survival rates between the Korean and American populations may be explained by differences in the study population (e.g., age, race, ethnicity, or pathology), cancer detection times (early diagnosis of WDTC in Korea), and therapeutic modalities including RAI and multitargeted kinase inhibitors.

Our study had several inevitable limitations including the retrospective study design. First, the number of study subjects was too small to permit further analysis in subgroups. Further large-scale studies should be done to validate our results. Second, variable follow-up periods in our study might have caused imprecision and bias because subjects lost to follow-up are inevitable in most cohort studies. To overcome the inherent limitation, we double-checked our mortality data by comparing the data obtained from the Korea Central Cancer Registry and the Korean Statistical Information Service. Third, not all primary thyroid tissues were available for molecular testing because the old tissue blocks had poor quality DNA or were not stored in the pathology files. These limitations may have contributed to a bias that could have affected the study outcomes.

Funding: This research was supported by grants (NRF-2017R1D1A1B03029597 and NRF-2020R1F1A1070028) from the Basic Science Research Program through the National Research Foundation of Korea funded by the Ministry of Science and ICT.

Reporting Checklist: The authors have completed the STROBE reporting checklist. Available at http://dx.doi.org/10.21037/gs-20-416

Conflicts of Interest: All authors have completed the ICMJE uniform disclosure form (available at http://dx.doi.org/10.21037/gs-20-416). The series “Asian and Western Practice in Thyroid Pathology: Similarities and Differences” was commissioned by the editorial office without any funding or sponsorship. CKJ serves as an unpaid editorial board member of Gland Surgery from Jul 2019 to Jun 2021. The authors have no other conflicts of interest to declare.

Ethical Statement: The authors are accountable for all aspects of the work in ensuring that questions related to the accuracy or integrity of any part of the work are appropriately investigated and resolved. The Institutional Review Board of Seoul St. Mary’s Hospital of the Catholic University of Korea approved this study (KC16SISI0709). Informed consent was obtained from each patient included in the study. This study was conducted in accordance with the Declaration of Helsinki.