The external branch of the superior laryngeal nerve (EBSLN) innervates the cricothyroid muscle that controls the pitch of the voice. Injury to this nerve results in impaired voice projection, easy vocal fatigue and the inability to high-pitch phonate.

Due to its close proximity to the superior thyroid vessels, its susceptibility to injury during thyroidectomy is well recognized. The traditional surgical technique involves ligating and dividing the superior thyroid vessels as close to the upper pole of the thyroid lobe as possible, without actually identifying the nerve, the nerve avoidance technique. Although this strategy remains mainstream, the risk of injury to the EBSLN is substantial as the nerve crosses close to or even below the upper border of the thyroid lobe in a significant portion of patients. Post-thyroidectomy voice changes are not uncommon, despite apparent normal vocal cord mobility (2,3). There is evidence that at least some cases of post-thyroidectomy dysphonia result from EBSLN injury. When laryngoscopy and voice analysis is used, the palsy rates range from 0% to 6% (4-7). When more accurate laryngeal electroneuromyography is included in the analysis, higher rates up to 58% are reported (8-12).

It is a general surgical principle to expose a nerve for its effective protection, such as the facial nerve in parotid surgery. This strategy has been the standard of care for the recurrent laryngeal nerve too. Using electromyography of the cricothyroid muscle as a post-operative outcome, prospective randomized studies have shown lower rates of EBSLN injury during thyroidectomy when the nerves were actively searched for and protected than when not (13,14). Despite this, the reported rate of successful identification of the nerve varies greatly from one study to another, with identification rates ranging from 33% to 93% (15). One important reason for this variation is the lack of reliable surgical landmarks available to identify the EBSLN. The aim of this study was to investigate whether the sternothyroid muscle insertion onto the oblique line of the thyroid cartilage and the anterior border of the muscle can be used as a reliable reference to locate the nerve. A secondary aim was to determine the percentage distribution of Cernea types of the EBSLN crossing.

Approval for the study, which was performed according to the Declaration of Helsinki, was obtained from the Joint Chinese University of Hong Kong – New Territories East Cluster Clinical Research Ethics Committee (CREC No. 2015.262) and informed written consent obtained from each patient.

This is a descriptive study of a prospective case series of open thyroidectomies performed in a tertiary referral hospital from February 2015 to July 2018. Adult patients who were scheduled for thyroidectomy were recruited if they consented to be enrolled. Exclusion criteria included previous same-side thyroid surgery, ipsilateral neck dissection, neck irradiation, or were scheduled to undergo thyroid isthmusectomy only.

All patients underwent conventional open thyroidectomy under general anesthesia. After exposing the lobe, dissection started at the upper pole. The exposure of the upper pole of the thyroid lobe was enhanced by dividing the overlying anterior 1 to 1.5 cm of the sternothyroid muscle near its thyroid cartilage insertion. Retractors were then placed under the partially divided sternothyroid muscle which was retracted superiorly and laterally. The upper pole of the thyroid lobe was grasped with a Babcock forceps and pulled infero-laterally to open up the cricothyroid space of Reeves, which lies between the cricothyroid muscle medially and upper pole of the thyroid lobe laterally. This area was carefully dissected until the nerve was identified, and confirmed to be so with a nerve stimulator. After identification, the exposed nerve was followed until it entered into the inferior constrictor/cricothyroid muscle at the nerve entry point (NEP). The few small blood vessels that traverse the space can be differentiated from the nerve with a nerve stimulator and coagulated and divided. If the superior thyroid vessels are adequately dissected for safe ligation and division without identification of the EBSLN, the search for the nerve should be discontinued and the vessels ligated and divided as standard practice and the procedure continued. 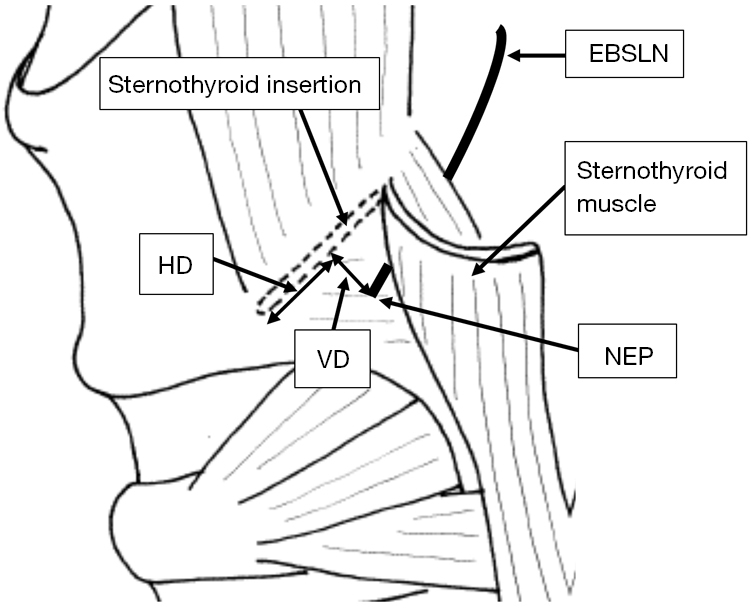 A secondary outcome is the distribution of Cernea groupings of the nerve. The weight of the excised thyroid lobe was also recorded. 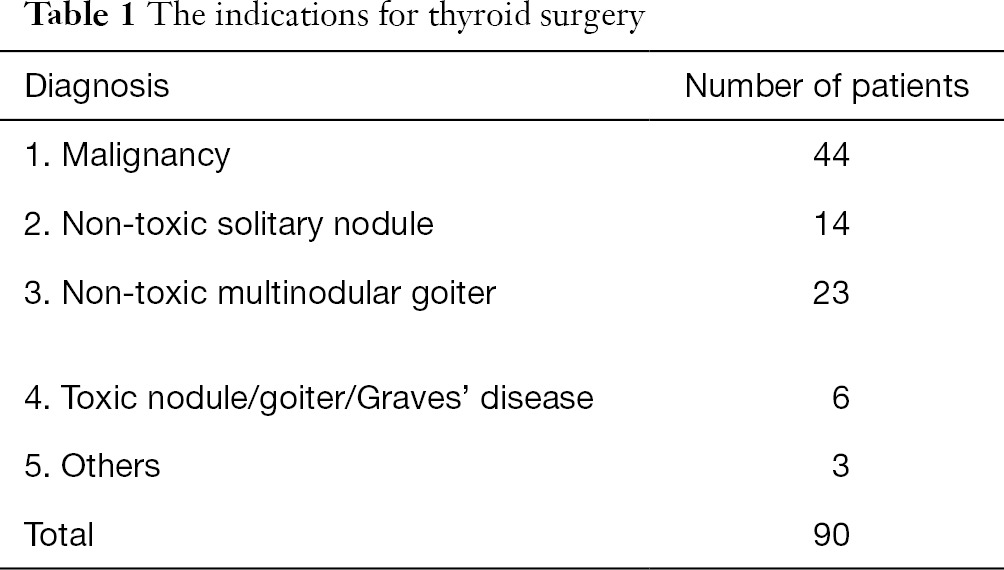 The anatomical relationships of the EBSLN to neighboring structures has been extensively explored in the past, including with the carotid artery (16-18), the superior thyroid artery (1,16,19,20), the inferior constrictor muscle of the pharynx (4,16,21,22), and the ascending pharyngeal vein (23). Within this significant body of previous work on the surgical anatomy of the external branch of the superior laryngeal nerve, the findings were either too crude or too variable to be used as reliable surgical landmarks. The sternothyroid muscle inserts onto the oblique line of the lamina of the thyroid cartilage, which is a linear ridge between the superior and inferior thyroid tubercles. The advantages of using the sternothyroid insertion as a landmark include the fact that it does not vary with the direction and force of retraction during dissection, it is constant and easy to find, and its exposure does not require a wider area of dissection than that which is usually necessary for a thyroid lobectomy. Similarly, the EBSLN entry point into the muscle does not vary with the direction of pull on the lobe, nor is there a bothersome ligament or vessel nearby, compared to the entry site of recurrent laryngeal nerve. Once the NEP into the inferior constrictor/cricothyroid muscle has been found, the nerve can be readily traced superiorly. 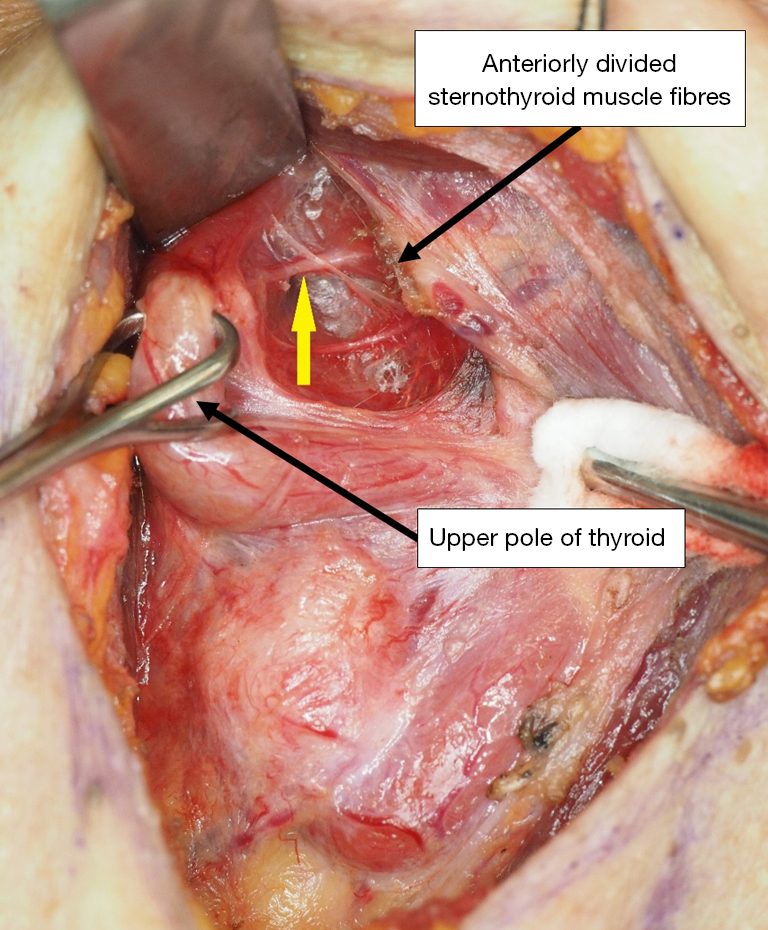 Interestingly, in one patient, there was a unilateral absence of the sternothyroid muscle and hence these landmarks could not be used. Nevertheless, it is an exceedingly rare anomaly, with only a few cases reported in the literature (24-26).

In our exploration of the upper pole of the thyroid lobe, the anterior fibers of the sternothyroid muscle were routinely divided close to its insertion onto the oblique line. Such a maneuver does not result in adverse functional voice outcomes (27,28). Instead, it greatly improved the exposure and ease of dissection of the EBSLN, thus reducing the chance of post-operative voice problems. In patients with large goiters, the complete division of the sternohyoid muscle was also necessary to expose the upper pole. Using a nerve stimulator, a rate of 87.4% successful identifications were possible in lobectomies in this series. For those nerves that could not be identified, it is possible that the nerve may have crossed the superior thyroid vessels higher up and were thus located superior to the area of dissection. The important point is to ensure that the upper pole vessel ligation and division is free of the EBSLN.

Our study showed a high prevalence of Cernea type 2 nerves (91.9%) with 52.3% being type 2B nerves. Even counting the unidentified nerves as type 1 nerves, assuming they were not identified because of a high crossing, the prevalence of type 2 and type 2B nerves were 78.5% and 44.6% respectively, which is on the upper side of the range reported in the literature, where the rates of type 2 and type 2B nerves were 37–83% and 11–40.8% respectively (1,20,29-33). A relatively high proportion of sizeable goiters in our series may account for this. This may be logical as a large goiter would tend to have a greater superior extension of the upper pole. Similar findings have also been reported in the literature (33-35).

This study showed that the EBSLN entry point into the inferior constrictor muscle usually lies within 2 mm from the sternothyroid muscle insertion onto the oblique line of the thyroid cartilage and 5–12 mm from the anterior border of the sternothyroid muscle, in the cricothyroid space of Reeves. With partial division of sternothyroid muscle fibers and using these landmarks, the EBSLN was successfully identified in 87.4% of 130 thyroid lobectomies in this series. The prevalence of Cernea type 2 EBSLNs, those most at risk of injury during thyroid lobectomy, is high especially in the presence of a large goiter. A routine identification approach is recommended to locate and protect the nerve, based on a sound understanding of local anatomy and described anatomical variations, and where possible to confirm it with a nerve stimulator, prior to ligating the superior thyroid vessels, to minimize the chance of inadvertent injury to the nerve.

Conflicts of Interest: All authors have completed the ICMJE uniform disclosure form (available at http://dx.doi.org/10.21037/gs.2020.03.25). The authors have no conflicts of interest to declare.

Ethical Statement: The authors are accountable for all aspects of the work in ensuring that questions related to the accuracy or integrity of any part of the work are appropriately investigated and resolved. Approval for the study, which was performed according to the Declaration of Helsinki, was obtained from the Joint Chinese University of Hong Kong – New Territories East Cluster Clinical Research Ethics Committee (CREC No. 2015.262) and informed written consent obtained from each patient.