Early-stage breast cancers are increasingly being detected with the advancements in diagnostic tools for breast cancer and the increasing number of women who undergo periodic medical examinations, improving the prognosis of patients with breast cancer. Therefore, breast-conserving surgery (BCS), which aims to minimize postoperative breast deformity after partial mastectomy without compromising tumor resection and allowing optimal oncological control, has become more common. Oncoplastic surgery, which is the expanded concept of BCS, was first attempted by Audretsch et al. in 1998 and included consideration of breast cancer and aesthetics (1). Two techniques are currently used in oncoplastic surgery according to the excised volume of the breast (2): the volume displacement technique based on glandular reshaping or reduction mammoplasty, and the volume replacement technique, which uses autologous tissue for different types of flaps.

In the present study, patients with small- to moderate-sized breasts who underwent BCS with different oncoplastic volume replacement techniques were evaluated and a comprehensive overview of the different types of volume replacement techniques was performed, including a lateral thoracodorsal flap, a thoracoepigastric flap, or perforator flaps such as an intercostal artery perforator (ICAP) flap or a thoracodorsal artery perforator (TDAP) flap, and a latissimus dorsi (LD) myocutaneous flap.

This study was performed at the Kyungpook National University Hospital and Kyungpook National University Medical Center, Daegu, Republic of Korea, and was approved by the institutional review board. Between January 2007 and December 2013, 213 patients with small- to moderate-sized breasts who underwent 216 oncoplastic volume replacement techniques after BCS by the senior author (J.D.Y.) were enrolled in this study.

Under general anesthesia, a wide excision (approximately 2 cm from the initial tumor margin) was performed by the general surgeon and tumor invasion at the resection margin was evaluated in the operating room using frozen sections. In patients with confirmed tumor invasion by sentinel node biopsy, axillary lymph node dissection was performed at level I and II nodes. The oncoplastic volume replacement technique was selected according to the excised volume. When the excised volume was <150 g, regional flaps were used, such as a lateral thoracodorsal flap, a thoracoepigastric flap, or perforator flaps such as an ICAP flap or a TDAP flap. When the excised volume was >150 g, a LD myocutaneous flap was used.

The tumor location was also considered in the selection of an appropriate oncoplastic volume replacement technique. When the tumor is located in the lateral aspect of the breast (upper outer or lower outer quadrant), a lateral thoracodorsal flap can be used. When the tumor is located in the lower pole of the breast (lower inner or lower outer quadrant), a thoracoepigastric flap can be used. An ICAP flap can be an alternative choice for lateral and inferior aspects. A TDAP flap can be also used for lateral and inferior quadrants and even for the upper inner quadrant (Figure 1).

The medical charts of all the patients were retrospectively reviewed, including history of radiotherapy and chemotherapy, and operative results such as excised volume, tumor location, type of oncoplastic volume replacement technique used, and postoperative complications.

To evaluate the satisfaction of the patients with the general and aesthetic outcomes of the oncoplastic surgeries, KNUH breast reconstruction satisfaction questionnaire was conducted six months after surgery (Table 1). Each question was graded on a 5-point Likert scale ranging from “very satisfied [5]” to “very dissatisfied [1].” Then, each questionnaire was divided into two groups, with a rating of “satisfied” for mean scores >4 and “dissatisfied” for all other scores.

To evaluate the aesthetic outcomes by the surgeon, three blinded plastic surgeons reviewed preoperative and 6-month postoperative photographs with frontal and bilateral oblique views for each patient. The surgeons scored the results on a 5-point Likert scale ranging from “excellent [5]” to “poor [1].”

The characteristics of the breast cancers are shown in Table 2, including the tumor location, pathological report, tumor node metastasis stage, and history of radiotherapy and chemotherapy. The largest number of the pathologic report was invasive ductal carcinoma. 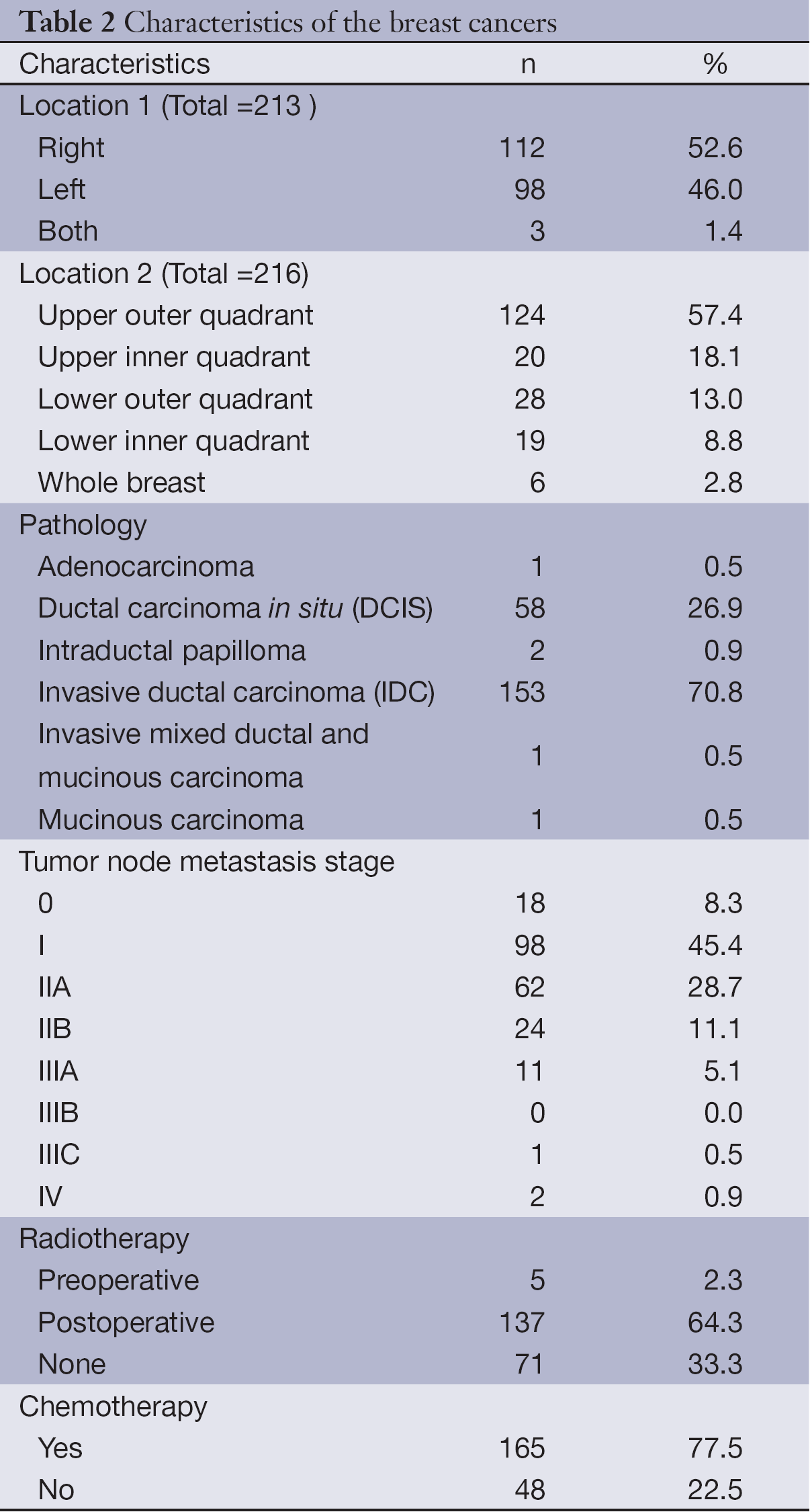 No postoperative complications such as flap necrosis or wound infection were observed. One case of congestion was observed in a LD myocutaneous flap, and three cases of fat necrosis occurred in ICAP flaps. There were 26 cases (19.0%) of seroma at the donor site of LD myocutaneous flaps that were resolved using regular needle aspiration in the outpatient clinic.

The results of patient satisfaction surveys are shown in Figure 5. A total of 178 patients (82.3%) were satisfied with the general and aesthetic outcomes. LD myocutaneous flap ranked highest among the other types of flaps regarding general and aesthetic satisfaction. The score of the aesthetic analysis by the plastic surgeon was 4.13. These results indicate that the cosmetic outcomes were considered satisfactory by most of the patients. 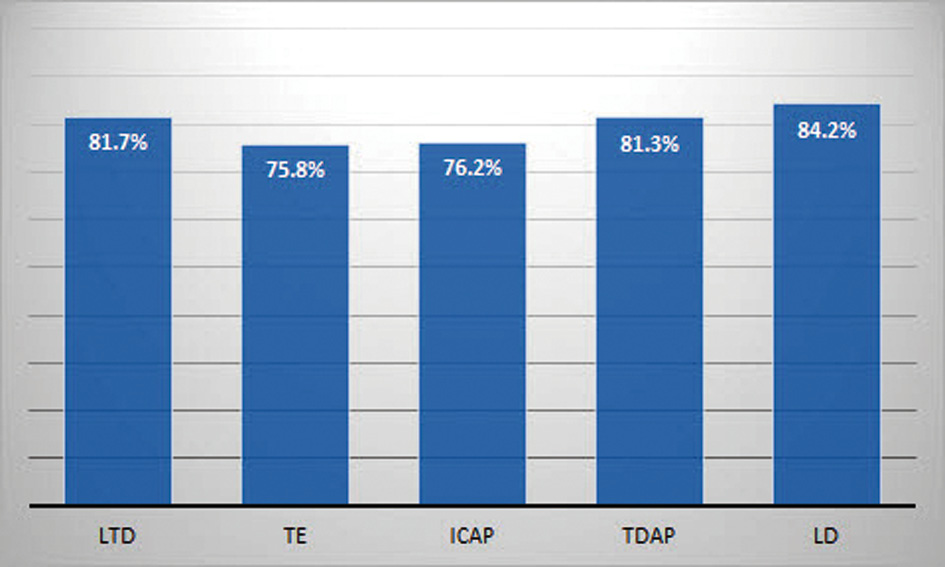 In 1981, Veronesi et al. reported no significant difference in the survival rates between quadrantectomy with axillary dissection followed by radiotherapy and modified radical mastectomy in patients with breast cancer <2 cm in diameter and negative axillary lymph nodes (3). In 1985, Fisher et al. reported no significant differences in local recurrence and survival rates between modified radical mastectomy and BCS followed by radiotherapy in patients with breast cancer <4 cm (4). Since then, BCS has been accepted as the primary treatment modality in patients with stage I and II breast cancer, unless specifically contraindicated (5). However, the unfavorable cosmetic results of BCS are a major drawback (6).

Breast size and excised volume are important considerations in oncoplastic surgery. In patients with relatively large breasts, especially in the Western population, the residual tissue is sufficient to reconstruct the breast after tumor excision. In these patients, satisfactory cosmetic outcomes can be obtained using glandular reshaping for relatively small defects or reduction mammoplasty for moderate or large defects. In patients with relatively small breasts, especially in the Asian population, the volume displacement technique can be performed after the removal of a small-sized defect. However, in patients with moderate or large defects after tumor excision, satisfactory cosmetic outcomes are difficult to achieve using the volume displacement technique. In these cases, satisfactory cosmetic outcomes can only be obtained using a volume replacement technique with autologous tissue in various types of flaps.

A lateral thoracodorsal flap is a wedge-shaped fasciocutaneous transposition flap with an axis along the lateral and dorsal extensions of the inframammary fold (12). The superior border of this flap starts at the medial to anterior axillary fold and extends laterally, with a curved inferior border extending to the anterior axillary line. The pinch test is useful to estimate the available volume of the lateral chest wall. During flap elevation, inclusion of the fascia of the LD and anterior serratus muscles under the flap is important, as they provide a reliable vascular supply derived from the lateral intercostal perforators, muscular fascia, and lateral perforators of the intercostal arteries. After flap is inset, the donor site is closed primarily. This flap is indicated when the tumor is located in the lateral aspect of the breast and when abundant skin and tissue of the lateral chest wall are available, which are good sources for reconstruction. However, a history of surgery to the lateral chest wall is a contraindication. This flap has certain advantages, including excellent skin and tissue matching with the breast, an inconspicuous scar positioned under the arm and brassiere, minimal donor site morbidity and preservation of the muscle under the flap (13).

A thoracoepigastric flap is a transposition flap based on the perforators derived from intercostal or superior epigastric vessels through the rectus abdominis or external oblique muscles (14,15). The superior border of this flap is at the inframammary fold, and the inferior border is determined after the pedicle is located using Doppler tracing. The flap consists of skin and subcutaneous tissue, and can be raised with or without the fascia of the rectus and external oblique muscles under the flap. The flap can be inset through the subcutaneous tunnel. The donor site is closed primarily. This flap is indicated in patients with sufficient skin and subcutaneous tissue under the breast and in tumors located in the lower pole of the breast. A history of previous surgery to the ipsilateral upper abdomen is a contraindication (16). The scar at the donor site can be easily concealed because it is located at the inframammary fold.

An ICAP flap is a fasciocutaneous transposition flap based on the perforators of the costal segment on the lateral aspect of the thorax (lateral ICAP, located 3 to 4.5 cm from the anterior border of the LD muscle) or from the muscular segment (anterior ICAP, located between the 6th and 7th intercostal spaces). Doppler tracing is useful to determine the location of the perforators, and the flap is located over the perforators. This flap provides excellent skin and tissue matching with the breast. The scar at the donor site can be easily concealed because the flap axis is located at the inframammary fold. This flap is suitable for tumors located at the lateral or inferior breast and for patients with sufficient skin and subcutaneous tissue on the lateral chest wall or under the breast (17).

A TDAP flap is an adipocutaneous flap based on the perforators (first perforators, approximately 8 cm below the posterior axillary fold and 2-3 cm posterior to the lateral border of the muscle; second perforators, 2-4 cm distal to the origin of the first perforator) from the thoracodorsal artery derived from the subscapular artery (18,19). This flap is similar to the LD flap (harvesting a similar skin paddle is possible), although the LD muscle can be spared; therefore, the morbidity of the donor site can be reduced. This flap can be used for defects in the lateral or central, and even medial breast.

A pedicled LD myocutaneous flap for breast reconstruction was first introduced by Schneider et al. (20). This safe and reliable flap is based on the thoracodorsal artery as the pedicle, and it provides muscle and subcutaneous tissue for the repair of glandular defects and skin for cutaneous defects. However, it has disadvantages compared with the other flaps, including a difficult surgical procedure, long surgical time, and morbidity of the donor site such as a wide scar, which can be concealed by the brassiere, limited range of shoulder motion, and seroma.