Thyroid cancer is the most commonly diagnosed endocrine malignancy and has a rapidly increasing incidence worldwide (1). Primary squamous cell carcinoma of the thyroid (PSCCT) is a rare type of thyroid cancer that accounts for less than 1% of all cases (2,3). The first case of PSCCT was reported by Vonkarst in 1858 (4). Patients with PSCCT often present at an advanced stage because of the rapidly progressing and highly invasive nature of the malignancy. These PSCCT characteristics also make it difficult to achieve negative margins during radical resection of the tumor. Because of the difficulties of removing PSCCT surgically and its lack of sensitivity to radiotherapy or chemotherapy, patients with PSCCT have an extremely poor prognosis, with median survival times after diagnosis of only 5–8 months (5,6). The clinical behavior of PSCCT resembles anaplastic thyroid carcinoma, another difficult to treat tumor of the thyroid with a poor prognosis (3,7). The published literature regarding PSCCT is limited, and includes only a few individual case reports and studies with small sample sizes (6,8-11). Thus, optimal approaches for treating patients have not yet been developed and there are no standardized management guidelines to treat PSCCT. Radiotherapy or chemotherapy is the only option for treating patients with unresectable PSCCT. Yet even for patients receiving surgery, potential benefits of additional treatment afterward are also unknown (3,12,13). To address this, we retrospectively identified patients with PSCCT who received treatment at Xiangya Hospital during 2006–2018. We used the clinical characteristics and outcomes of these patients to develop comprehensive diagnostic and treatment approaches for patients with PSCCT.

We performed this retrospective study after receiving approval from the Ethics Committee of Xiangya Hospital, Central South University in Changsha, China (No: 201901005). We identified 6,190 cases of thyroid cancer from January 2006 to May 2018, yet only 12 patients (nine males and three females) met the study’s inclusion criteria. These cases accounted for 0.19% of all thyroid cancers at our hospital. The patients ranged in age from 38 to 79 years old, with a median age of 59.5 years old. Nine of the patients had cervical lymph node metastasis and three had lung metastases.

(I) Surgery: the types of surgical resection included radical, extensive, and palliative resection. Radical resection is a total thyroidectomy plus cervical lymph node dissection. Extended resection removes the primary tumor focus and surrounding invaded tissue. Palliative resection is not intended to be curative and aims for symptomatic improvement through removal of part of the primary focus or metastatic lymph nodes, leaving visible cancerous tissue behind. (II) Radiotherapy: radical local radiotherapy was given at a dose of 60–86 Gy. (III) Chemotherapy: taxol + platinum or anthracycline + platinum. (IV) Comprehensive treatment: surgery + radiotherapy or surgery + radiotherapy + chemotherapy.

Six patients underwent rough needle biopsy without surgery. The other six patients received thyroidectomy, in which three, two, and one received radical, extensive, and palliative resection, respectively. Cervical lymph node dissection was performed on all six of these patients and four of six (66.7%) had cervical lymph node metastasis that was confirmed by histopathology. 11 patients underwent radiotherapy (60–86 Gy). Six patients received chemotherapy, including paclitaxel + cisplatin in for cases and docetaxel + cisplatin for the other two cases. The outcomes of these patients included five patients who had a partial response and four who did not respond at all. Five of the patients who did respond developed both local and distant recurrence within 11 months Two patients had a progressive disease and one patient who underwent surgery (radical resection)+ radiotherapy (paclitaxel + cisplatin) + chemotherapy (68 Gy) achieved stable disease and survived for 18 months (Table 1).

The 6-month survival rate for patients with PTSCC was 66.7%, and the 1-year survival rate was 25.0%. The median overall survival time for all 12 patients was 10.5 months. The median survival time of patients treated with comprehensive treatment versus radiotherapy and/or chemotherapy treatment was 12.5 and 6.0 months, respectively. During the follow-up period, local tumor recurrence happened in seven patients and distant metastasis occurred in five patients, which included four cases of lung metastasis and one case with bone metastases. The longest survival time was 18 months of a single patient. Kaplan-Meier analysis showed that the comprehensive treatment was superior to the radiotherapy and/or chemotherapy (P=0.003) (Figure 1).

Figure 1 Prognosis and Kaplan-Meier analysis. (A) Kaplan-Meier curve for primary squamous cell carcinoma of the thyroid showing disease specific survival; (B) comparison of survival rate between comprehensive treatment and the radiotherapy and/or chemotherapy where a is radiotherapy and/or chemotherapy (n=6) and b is comprehensive treatment (n=6).

Computed tomography (CT) scans of these patients showed a mass with an irregular shape, poorly defined boundary, calcifications, and necrosis. The growth of the mass invaded surrounding organs, including the esophagus and trachea. Contrast-enhanced CT showed the mass was unevenly enhanced. The signal was mild to moderate in arterial phase and further strengthened in venous phase (Figure 2).

Figure 2 Computed tomography scans of a representative patient with PSCCT. A nodule with mixed density is found in the right thyroid gland, across the isthmus to the left thyroid lobe, with a size of approximately 3.3 cm × 3.4 cm. The right bronchus was compressed, displaced and invaded. Image view: (A,B) horizontal; (C) sagittal; (D) coronal. PSCCT, primary squamous cell carcinoma of the thyroid.

The diagnosis of all patients was confirmed using histopathology. Tumor specimens showed a palisade arrangement, intercellular bridges, and keratinization with a cancer pearl. Interstitial fibrous tissue hyperplasia was obvious with mononuclear cells and lymphocytic infiltration. All patients’ specimens stained positively for p63, while 41.7% (5/12) were CK19+ and the Ki67 proliferation index ranged from 5% to 50%. All patients’ tumors stained negatively for TG, CD5, CK20, CT and TTF-1.

PSCCT is a rare type of thyroid cancer that accounts for less than 1% of all thyroid cancers (2,3). Squamous epithelial cells are absent in the normal thyroid gland, aside from the minimal cellular remnants of the thyroglossal duct or branchial clefts, left from embryonic development. Three theories have been proposed regarding the origin of PSCCT. The embryonic nest theory suggests the squamous cells of PSCCT are derived from embryonic remnants such as thyroid duct, zygomatic arch, posterior corpus callosum, or thymic epithelium (14). The metaphysical theory states that environmental stimuli lead to squamous metaplasia, as seen in squamous thyroid follicular epithelium metaplasia. This theory is supported by observations of focal or extensive squamous metaplasia in pathological specimens from patients with Hashimoto’s thyroiditis, nodular goiter, or some other thyroid cancers (15). The de-differentiation theory suggests that existing papillary, follicular, medulla or anaplastic thyroid cancer cells de-differentiate into PSCCT (16). These competing theories are unified in their belief that squamous metaplasia is a core component of PSCCT etiology (17). When diagnosing PSCCT, it is necessary to exclude tumors that are from adjacent or distant organs (e.g., pharynx, esophagus, lungs, or nasopharynx). Using laryngoscopy, gastroscopy, CT scan, or systemic PET-CT, the possibility of secondary thyroidal squamous cell carcinoma can be ruled out (18-20). Cellular markers such as p63, PAX8, CK7, CK19, CK20, TG, and TTF-1, can also be used to help diagnose PSCCT (5,8). In our study, all patients were diagnosed with PSCCT using histopathology which showed a palisade arrangement, intercellular bridges, and keratinization with a cancer pearl. Interstitial fibrous tissue hyperplasia with mononuclear cell and lymphocytic infiltration was also apparent. All patients were p63+ and 41.7% (5/12) also stained CK19+. Ki67 proliferation indices ranged from 5% to 50%. All patients were TG−, CD5−, CK20−, CT−, and TTF-1− (Figures 3,4). 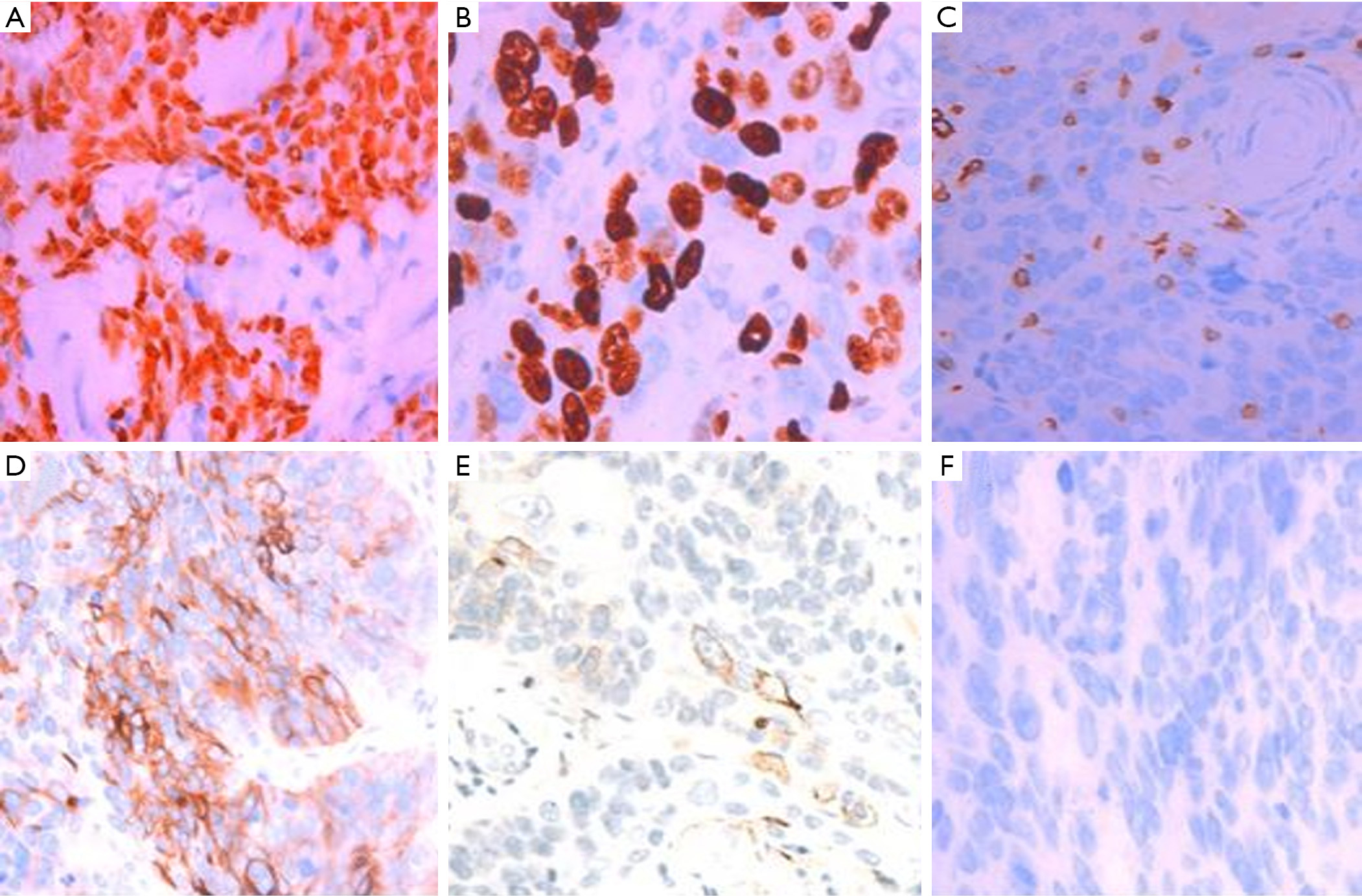 Optimal treatment for PSCCT is unknown, as only a few PSCCT cases have been reported and treatment guidelines have not been standardized. PSCCT is characterized by rapid growth and has significant invasive potential for malignancy spread into nearby vessels and the adjacent tissues, including those as small as even in 1–3 cm in diameter. Some groups believe that it is difficult to stabilize disease progression using only a single treatment strategy (2,11). To date, radical resection combined with postoperative radiotherapy is considered the most effective treatment strategy. In our study, six patients received radiotherapy alone or radiotherapy combined with chemotherapy, which the other patients received comprehensive treatment. The median survival time of these two groups was 6.0 and 12.7 months, respectively. Survival analysis showed that comprehensive treatment was superior to radiotherapy alone or radiotherapy plus chemotherapy. For patients in good condition, chemotherapy can be tried first prior to surgery and radiotherapy. An optimal chemotherapy plan is not yet defined, but it is considered less important compared to surgery and radiotherapy. Struller et al. (9) retrospectively analyzed 50 patients with PSCCT and found that radical resection combined with radiotherapy or chemotherapy led to patients have a longer disease-free survival time. Cook et al. (21) described optimal surgical therapy as hemithyroidectomy or total thyroidectomy, depending on the multifocality, followed by postoperative radiotherapy. The combination of radiotherapy contributes to locoregional control and extends long-term survival time up to 20 months. However, some researchers believe a combination of surgery, radiotherapy, and chemotherapy has little effect on improving prognosis or prolonging survival time in PSCCT patients (19). They theorized that since surgery and radiotherapy are local treatment of cancer lesions, they have little therapeutic effect in cancer cells after blood vessel invasion and distant metastasis happen. They concede that the effect of chemotherapy in this case is still undefined. Although PSCCT is resistant to radiotherapy and has limited response to chemotherapy, we believe that palliative radiotherapy or chemotherapy is a good strategy to reduce tumor load and prolong disease-free survival time when the tumor is unresectable or radical resection is impossible.

Yasumatsu et al. (3) reported that four patients with PSCCT obtained successful response to oral Lenvatinib, in which one patient achieved partial response, and three showed good response and reached stable status. Lenvatinb is a multi-receptor tyrosine kinase inhibitor that targets a variety of angiogenic and carcinogenic signaling pathways. It has been approved in Japan for the treatment of unresectable thyroid carcinoma, including anaplastic thyroid carcinoma (12). Lenvatinb has already shown considerable promise in the treatment of liver cancer and other types of cancer (22). In addition to surgery, radiotherapy, and chemotherapy, small molecule inhibitors such as lenvatinb may provide another treatment option for PSCCT patients, that could contribute to prolonged survival.

PSCCT is a rare type of thyroid cancer with highly invasive potential and is associated with a poor prognosis. Comprehensive treatment is conducive to improving patient survival. However, superior surgical approaches in PSCCT have not been clearly defined and radiotherapy dosing as well as optimal chemotherapy agents are yet to be elucidated.

We would like to thank our patients who allowed us to make this study possible. We thank MedEditing LLC for its linguistic assistance during the preparation of this manuscript.

Ethical Statement: The authors are accountable for all aspects of the work in ensuring that questions related to the accuracy or integrity of any part of the work are appropriately investigated and resolved. This study was approved and supervised by the Ethics Committee of Xiangya Hospital (No. 201901005).