An understanding of the anatomy of the deep inferior epigastric artery (DIEA) is clearly essential when performing a DIEP flap. The DIEA has classically been described with three branching patterns: type I displaying a single trunk, type II with a bifurcating DIEA and type III with a trifurcating DIEA (2,3) (Figure 1). These branches distribute 5–6 major perforators to the muscle and overlying subcutaneous tissues (3). The perforators have a tortuous intramuscular course ranging from short to long through the rectus muscle (4) (Figure 2). These perforators can be further categorised into a medial and lateral row. Medial row perforators have a larger internal diameter, a direct course to Scarpa’s fascia and a greater branching pattern crossing the midline of the abdomen (5). Contrastingly, lateral row perforators have a smaller internal diameter, a transverse course to Scarpa’s fascia, less branching and doesn’t tend to cross the midline (5). This has led to separate categorisations of ‘perforator angiosomes’, for each of medial and lateral row perforators (Figure 3).

The vascular anatomy of the abdomen displays significant inter-individual variability and therefore it is common practice to utilise imaging to aid in operative planning. Modern imaging technologies such as CTA has become the mainstay of pre-operative planning due to its ability to map out the vascular anatomy (6,7). CTA has introduced an era of “personalised reconstructive surgery” with the added benefit of reducing post-operative complications such as fat necrosis and donor site morbidity in DIEP flaps (8).

‘Our’ technique for utilizing CTA is described in the following manuscript and digital video, demonstrating the anatomy, methodology and approach to interpretation of CTA for DIEP flaps (see Figure 4). 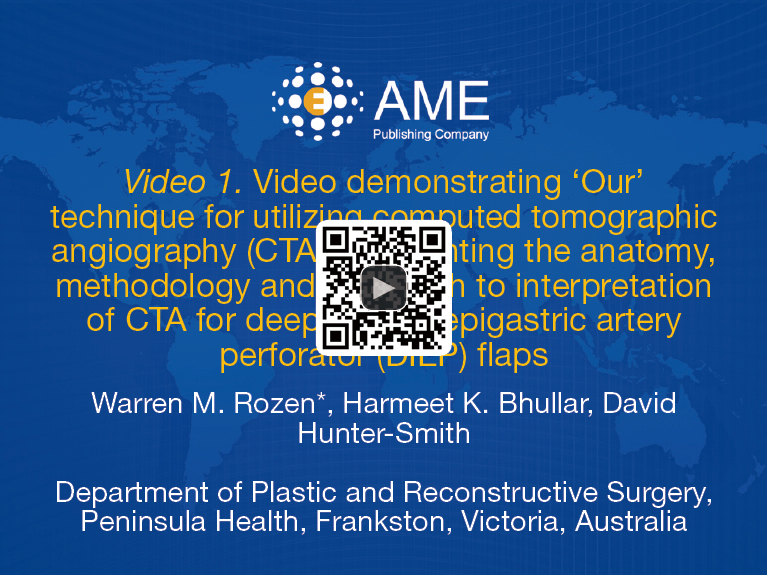 3D reconstructions are configured with volume-rendering technique (VRT) and maximum intensity projections (MIPs). The colour look-up table (CLUT) function is used to perform VRT reconstruction. A range of CLUT variations are suitable, and have been published to date. VRT imaging demonstrates perforator size and location by highlighting their subfascial and subcutaneous course as they emerge from the rectus sheath, while MIP demonstrates the intramuscular course of the perforators (10).

(I) Perforator size and location

The next step is to review the intramuscular course of the larger perforators. Ideally to reduce abdominal site complications it is preferable to choose a perforator with a short course through the rectus muscle as this is associated with less dissection and therefore reduced donor site complications.

Once the arterial vascular anatomy has been established the surgeon should then consider the venous anatomy. Venous drainage represents a significant portion of vascular complications encountered by the reconstructive surgeon of the breast (12,13). The abdominal venous anatomy contrasts to its arterial counterpart by having a dominant superficial drainage system compared to a dominant deep arterial system (Figure 5). The method used for mapping the arterial perforators is duplicated to identify the size and location of the superficial and deep venous systems. The venae comitantes of the DIEA is reliably identified running alongside the artery within or deep to the rectus muscle and then turns laterally with the DIEA to reach the femoral vein (14).

A holistic approach to the DIEP flap includes reviewing the SIEA and SIEV. The same technique is implemented to identify and assess the diameter and location of the SIEA. This is especially beneficial when the DIEA perforators have a long intramuscular course and smaller diameter indicating a technically difficult and risky flap elevation. Consideration of the SIEA enables the surgeon to plan prospectively if an SIEA flap would be better suited based on the patient’s vascular anatomy. The SIEV is assessed for its location, size and length for a SIEA flap and in cases where a secondary venous outlet is required for the DIEP flap. Reconstructive breast surgeons consider the SIEV as the donor vein of choice because it provides drainage through deep and superficial venous territories (14).

Finally, the abdominal wall structure should be assessed specifically for abdominal wall herniation and rectus divarication. These weak points in the abdominal wall can be addressed intra-operatively during sheath closure. Review of the rectus sheath also enables planning of sheath incisions in relation to the perforator course to minimise the risk of donor site complications.

The pre-operative plan formulated from CTA review can be implemented in the operating theatre. The first step is to mark out the chosen perforator(s) on the patient’s abdomen with a surgical marker. A Doppler ultrasound can supplement localisation of perforator(s). More recently, a “perforasome template” of the DIEA can be 3D printed utilising images from the patient’s CTA to further enhance flap design preoperatively (15).

Intra-operatively, knowledge of the intramuscular course of the perforator will aid dissection and reduce error and operative time (8). Once the chosen perforators are located and dissected down to the DIEA pedicle, the perforator angiosome is estimated based on the CTA and areas with poor perfusion are discarded. At this point, the SIEV if subjectively engorged or there are signs of venous congestion in the flap should be utilised as secondary venous drainage. In most cases, a contralateral SIEV is preferred (14). Finally, weak points in the abdominal wall identified on the CTA can be reinforced prior to donor site closure.

CTA has become a mainstay of pre-operative planning in the DIEP flap due to ease of access, affordability, reproducibility and operator independence (16). Extensive research has demonstrated that CTA has close to 100% sensitivity and specificity in detecting perforators (16). However, this must be balanced with the higher exposure to ionising radiation, sensitivity to contrast media and contrast induced-nephrotoxicity when compared to MRA or ultrasound. The ionising radiation dose can now be reduced to 5 mSv, equivalent to two abdominal X-rays, with appropriate software and hardware modifications (6,17). The optimal CTA parameters include a supine position, assessment of flap area only, instilling a bolus of contrast at the common femoral artery and caudo-cranial scanning in the direction of DIEA flow with acquisition time set to 4 seconds (18).

MRA is a strong contender against CTA as it has no radiation exposure and a safer contrast allergy profile. MRA provides clearer definition of the intra-muscular course of the perforators while CTA is superior at demonstrating the subcutaneous course (16). MRA has had limited uptake in the clinical setting due to high average costs, susceptibility to motion artefact, contraindication with MRI incompatible devices and prolonged examination window, however certainly has an evolving role.

Informed Consent: Informed consent for all clinical or imaging reproductions was obtained.