Gynecomastia denotes benign enlargement of the male breast due to a proliferation of ductal, stromal, and/or fatty tissue due to imbalance of androgen and oestrogen (1). It is a common problem which can be seen in up to 65% of men (2), and can result in noticeable enlargement of the chest with negative implications on the patient’s quality of life (3). In a third of patients it presents initially in adulthood (4), particularly following therapeutic androgen-inhibiting treatment. If the gynaecomastia is long-standing, fibrosis and hyalinization of the glandular tissue occurs—making it no longer amenable to medical intervention leaving surgery the only remaining option (4).

The most commonly used breast reduction method utilises the Wise pattern, due to its favourable breast projection in female breast reduction (9). It leaves both a horizontal and vertical scar (10). However, the lack of breast projection in the flatter male chest makes the vertical component of the T-scar more visible, and so removal of this reduces the potential scar burden on the patient. This makes the Lalonde no-vertical-scar technique particularly attractive. It was therefore surmised that application of this technique to male breasts might result in reduced scarring while enabling effective reduction of the glandular tissue.

The surgeon adopted a modification of the original Lalonde technique used for female patients (11). The patient profile is marked up in the upright sitting position beginning with the midline and breast meridians. The ideal new nipple position is determined; this is roughly the level of the inferolateral border of the pectoral muscle in the breast meridian (12). A 2 cm circle is outlined centered on this ideal nipple position. The outlines of the breast tissue are marked, then a horizontal line is drawn on the breast mound 7 cm (minimum 5 cm) from the central point of the neo-areolar position (Figure 1). This line is then connected to the inframammary fold and the resulting ellipse outlines the area to be de-epithelialized. All procedures were performed under general anaesthetic with an overnight hospital stay. 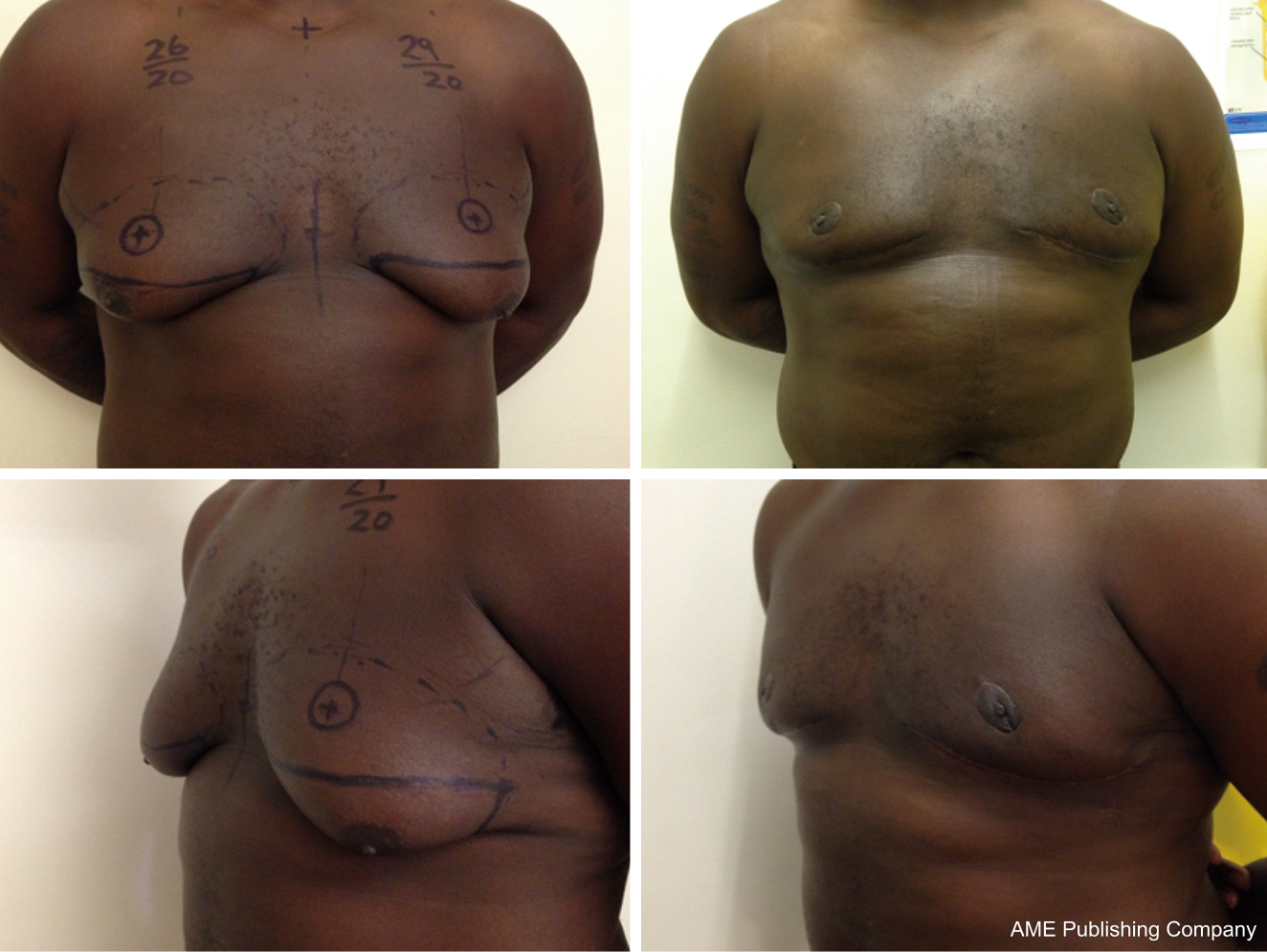 Intra-operatively, the breast tissue is infiltrated with standard liposuction solution. The breast is then liposuctioned to reduce the volume and an inferior ellipse of the breast is de-epithelized apart from a 2 cm disc of areola around the nipple (Figure 2). The neo-areolar disc is excised full-thickness to the level of the glandular tissue. The superior incision is deepened to the level of the residual glandular tissue, which is then resected sharply leaving an adequate dermal-fat flap sufficient to vascularize the nipple. After establishing the meticulous haemostasis, the de-epithelialized inferior flap is advanced superiorly to align the nipple-areolar with the neo-areola “button-hole”. The flap is then secured to the chest wall with 2/0 polydioxanone (PDS) sutures, while the superior flap is pulled inferiorly and secured to the inframammary fold with the same suture material. Standard closure is performed (Figure 3). Around the nipple, 3/0 vicryl deep dermal and 4/0 Monocryl subcuticular stitches are used, and for the horizontal incision 3/0 Monocryl in two-layers. A suction drain is inserted underneath the inferior flap. During the subcuticular closure, an attempt is made to cinch the horizontal incision in order to shorten its length. Patients are kept in hospital overnight. The resected tissue is sent for histology. 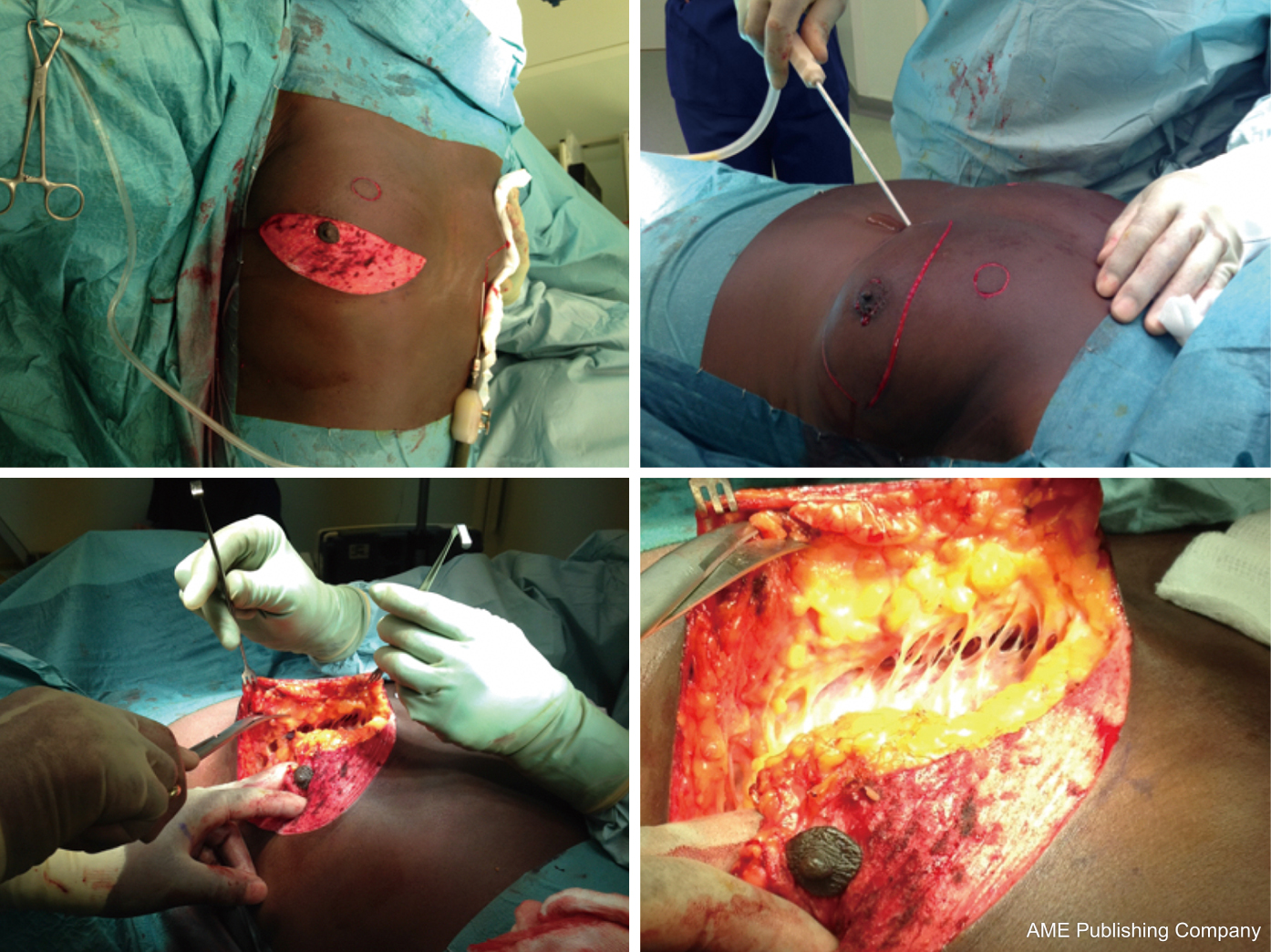 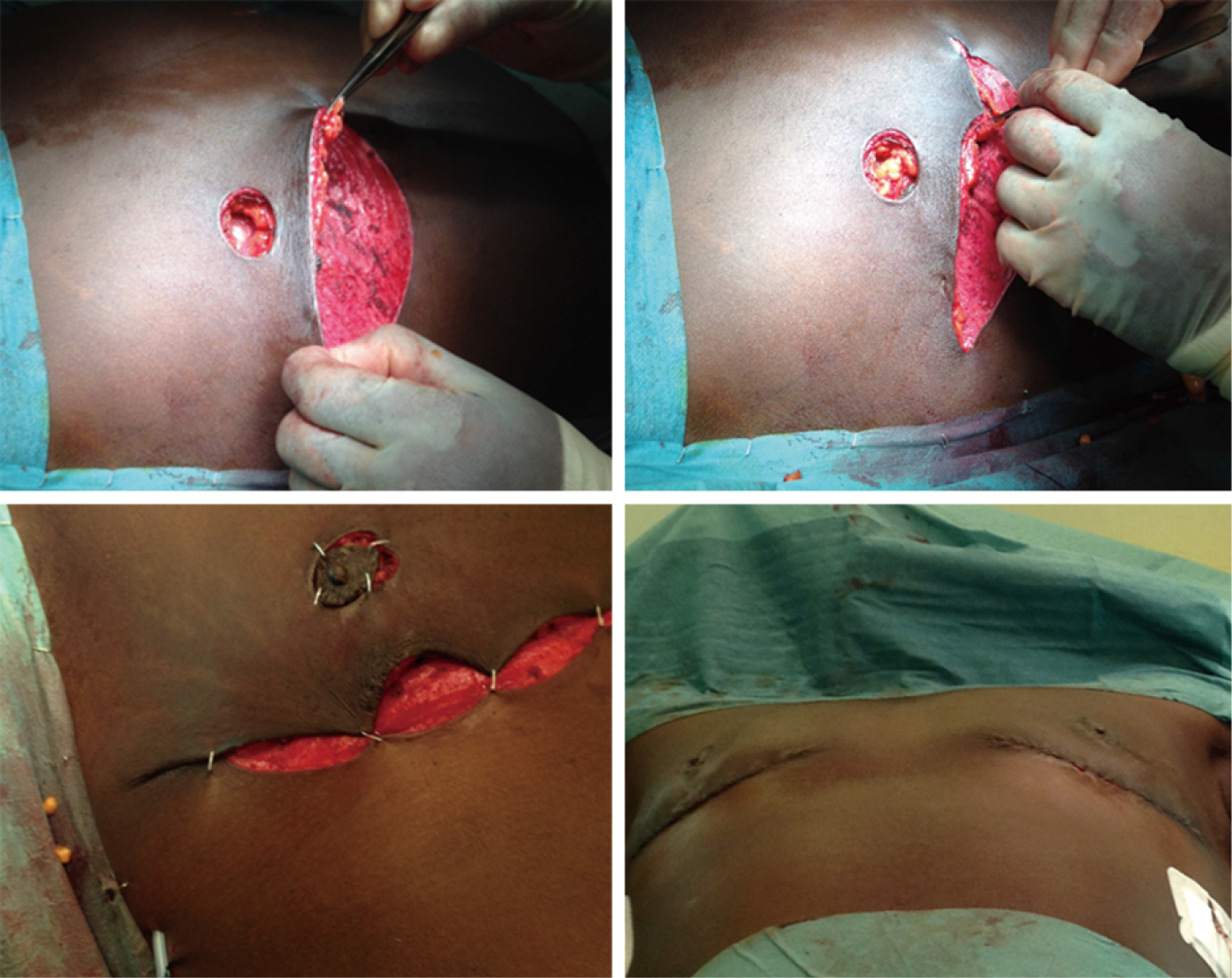 The Lalonde technique was applied in the surgical treatment of large gynaecomastia in three dark-skinned patients (A, B, C).

A 59-year-old man of Afro-Caribbean descent and Fitzpatrick type 6 skin colour was referred by his oncologist with 1–2-year history of bilateral painful breast enlargement following anti-androgen therapy for his prostate cancer. Examination revealed moderately large asymmetrical gynaecomastia (left larger than right) with good skin quality, moderate skin excess and well-developed inframammary folds (Figure 4). The consistency of the breast tissue was soft and the distribution diffuse but the left breast was tender to palpation. 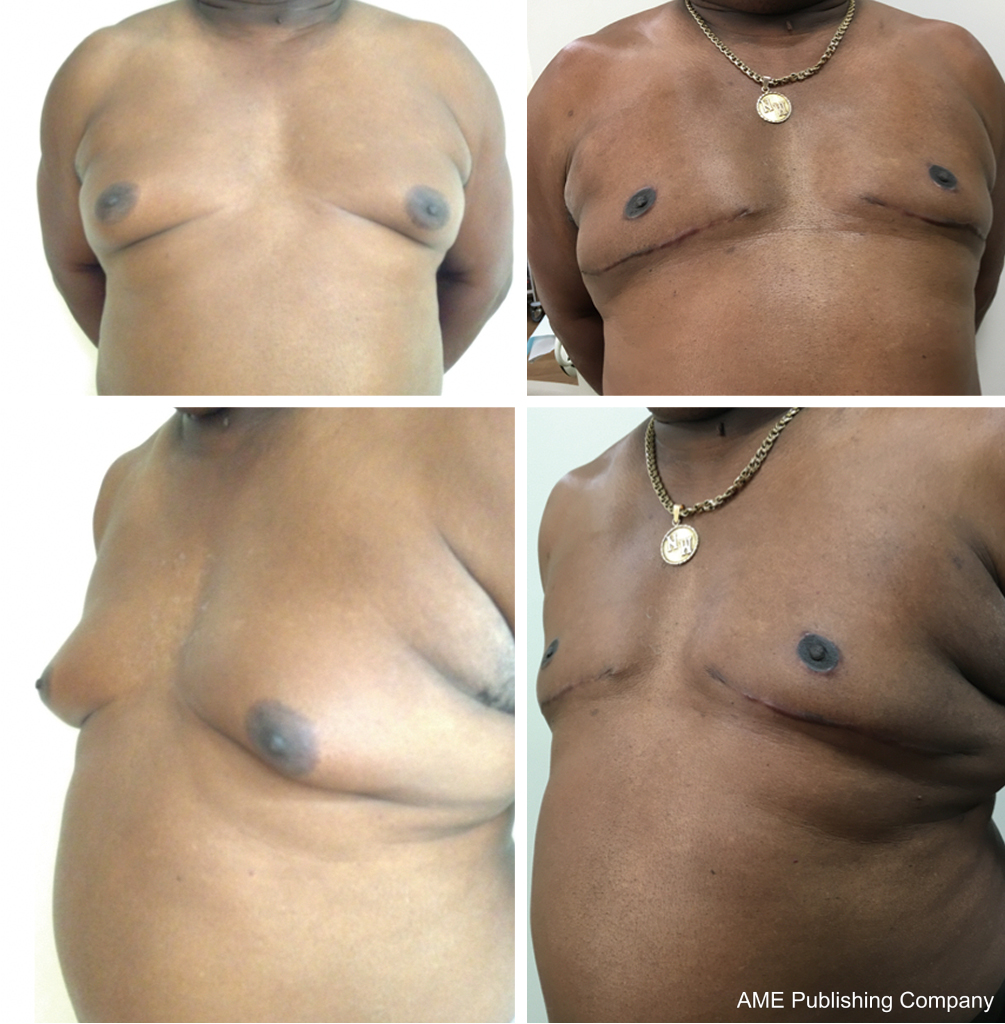 The patient underwent a 3-hour gynaecomastia correction which entailed liposuction, open glandular excision and nipple transposition using the Lalonde technique (Figures 2,3). Liposuction yielded 200 mL fat from each breast whilst the tissue resection was 89 g from the right and 94 g from the left.

There were no early postoperative problems apart from mild bruising, diffuse tenderness and severe pain in the anterior axillary fold areas at the sites of the liposuction which needed symptomatic treatment with cold compresses and codeine. At 6 weeks, he was advised to start using Kelo-cote™ silicone gel cream twice daily. Five months post-operatively he was completely pain-free but was noted to have mild scar hypertrophy on the left horizontal scar. He subsequently required triamcinolone injections into the symptomatic horizontal scars bilaterally four times over a 2-year period. This was very effective with symptomatic relief and softening and flattening of the scars (Figure 4). Now, over 3 years later he has acceptable cosmetic results with which he is very pleased.

A 39-year-old Afro-Carribean (Fitzpatrick type 6) had had gynaecomastia since puberty, with a positive immediate family history. He sought assistance because it limited his choice of clothes, made him very self-conscious, and sensitive to comments from peers. Examination revealed a well-built young man with very large gynaecomastia associated with skin excess, ptosis, well-developed inframammary folds and only fair skin quality (Figure 1). The glandular tissue had a firm consistency.

The patient underwent a 2.5-hour procedure comprising liposuction, open glandular excision and skin reduction with nipple transposition by Lalonde-type breast reduction technique (Figures 2,3). There was 200 mL liposuction from each breast, 88 g tissue resection on the right and 100 g on the left. Although the procedure was uneventful, 4 days post-operatively he developed a left breast haematoma which was evacuated under general anaesthetic.

He went on to heal with no further problems and achieved satisfactory correction of the ptosis, breast size and chest wall contour (Figure 1) with which he is very pleased. He, however, developed symptomatic scar hypertrophy which required several treatments with silicone gel cream and triamcinolone injection on the side that was complicated by the haematoma. The postoperative photos were taken 12 months later, but follow-up in consultation 2 years later the patient reports that he was very pleased with the results.

A 26-year-old man of North-African origin (Fitzpatrick type 5 skin) presented with large pendulous breasts with excess skin comprised mainly of glandular tissue, pseudo-ptosis (grade III), granular-spongy consistency and poor skin quality. The breasts were noticeably asymmetrical with the left larger than the right (Figure 5). He had voluntarily lost 37 kg (from 135 kg) over 8 years with no significant medical history. 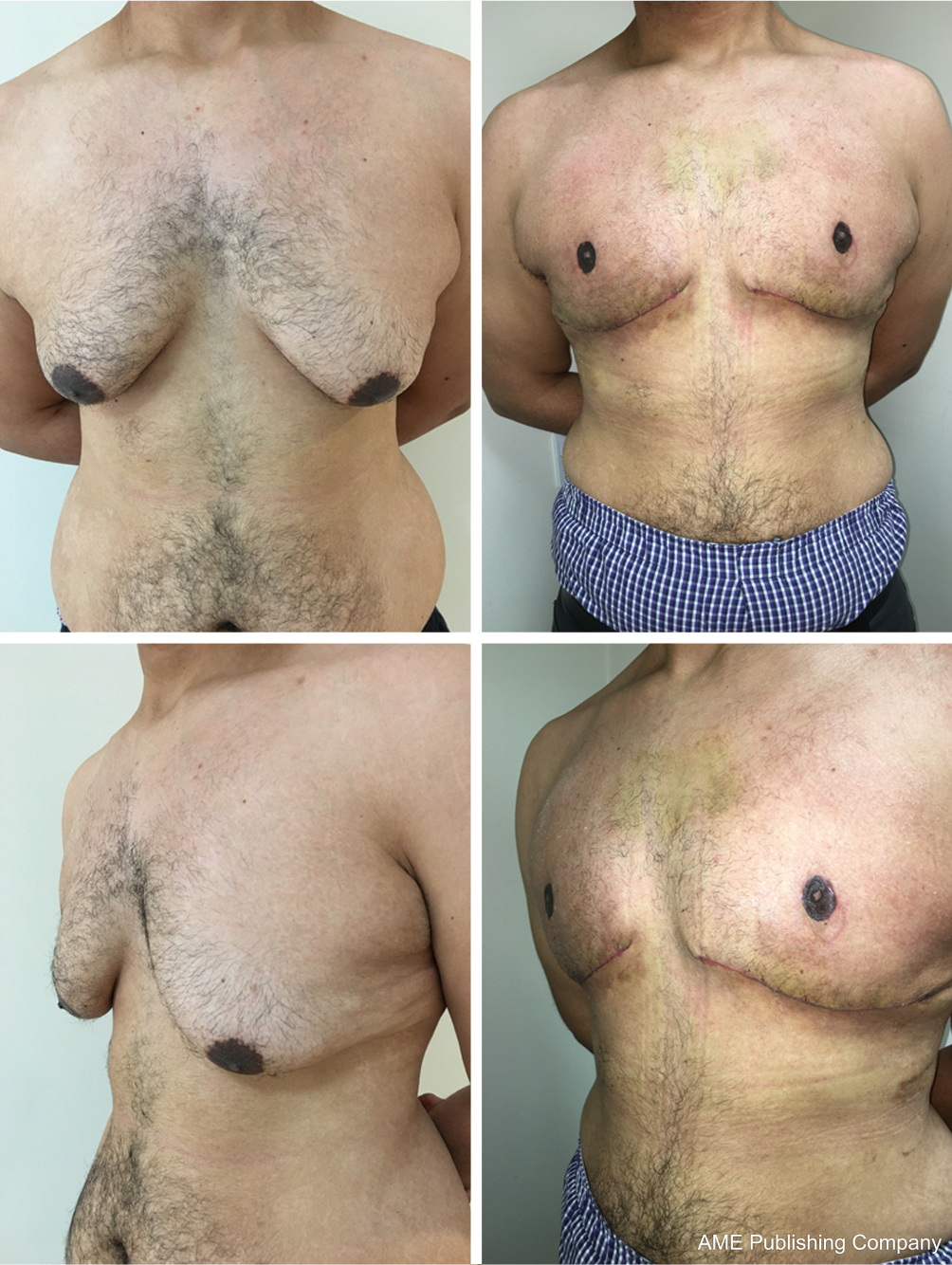 The procedure took 2 hours and required 420 mL of liposuction on the right breast and 530 mL on the left. There were no intra or early postoperative complications and the patient has been very pleased with the cosmetic results (Figure 5). The patient was last photographed at 14-months post-operatively (Figure 6); he currently has no complaints. 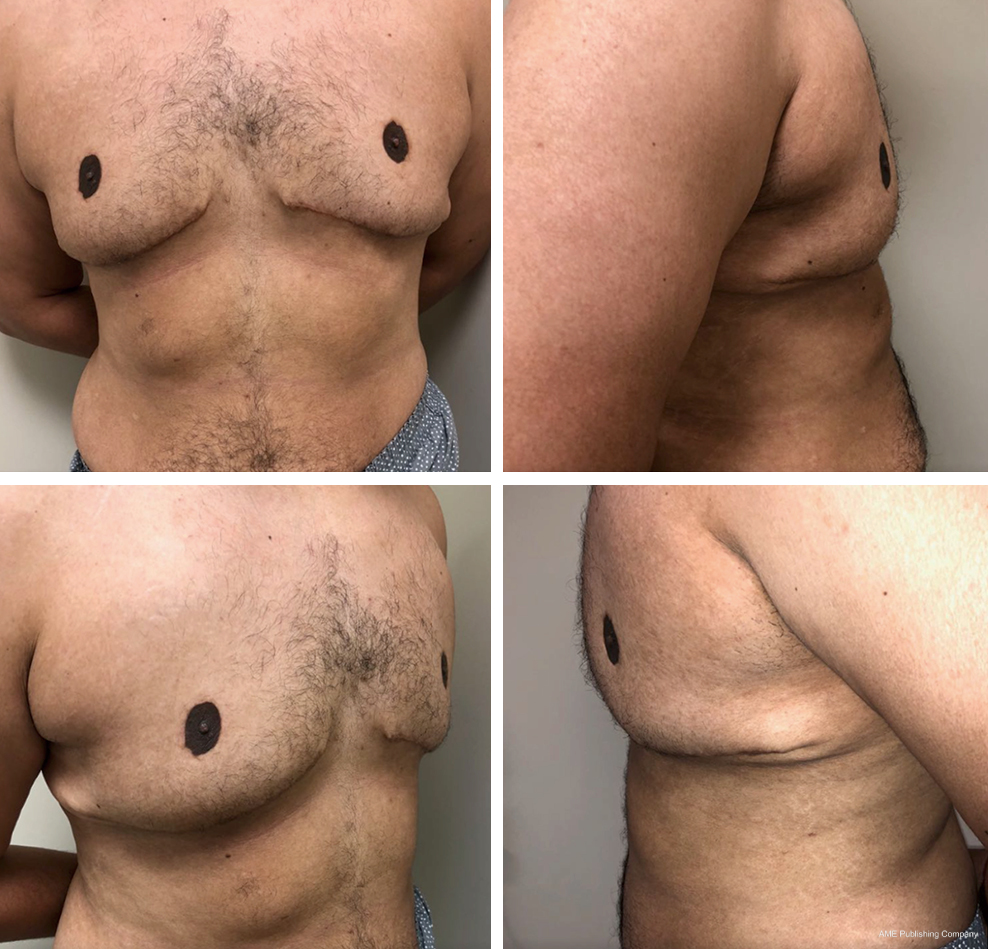 To our knowledge, this is the first report in literature on the application of the Lalonde “no vertical scar” breast reduction technique to darkly pigmented male patients for the treatment of gynaecomastia. The Lalonde horizontal scar breast reduction technique utilizes the same incisions as the Wise pattern (T-scar) but eliminates the vertical scar—leaving the periareolar and inframammary components only (11). This reduces the scar burden. The goal of minimizing scar tissue is of particular importance in patients with darkly pigmented skin. Significant scar hypertrophy and keloid formation are more common in this population (13), and this reduces their satisfaction with the procedure. This case series demonstrates the successful use of the Lalonde technique in three patients of African descent yielding cosmetic results found satisfactory by both surgeon and patients.

Two patients developed hypertrophic scarring (treated conservatively) but this may have been exacerbated in the traditional Wise pattern (T-scar) technique for gynaecomastia correction due to the extra scar and the tension on the peri-areolar incisions from concentric skin reduction (13-15). This is avoided in the buttonholing areolar siting technique during the Lalonde procedure. The hypertrophic scars developed on the side of a haematoma in one patient and the medial sides of the horizontal scar in another. The latter can be minimised or avoided altogether by keeping the horizontal incision medially towards the sternum.

Our three gynaecomastia patients presented with different aetiologies: secondary to hormonal therapy, post-pubertal primary, and post-weight loss primary. In all three the principal concern was the aesthetic appearance of the chest which affected each patient’s confidence. Following the procedure, all three patients were very pleased with the cosmetic outcomes and it has positively impacted their lives e.g., improved confidence with or without clothing. Patients with darkly pigmented skin have a well-known propensity for keloid scar formation (16). Scars affect patients’ overall wellbeing. Moreover, this has an impact on their perception of personal appearance, and this influences satisfaction with surgery especially when the scars are in sensitive places on the body or cannot be covered by clothes (17,18). Improving cosmetic outcomes of scars can be done before the post-operative phase by selecting the surgical method that utilizes fewer incisions in more sensitive locations.

Employing the Lalonde technique leaves patients with a peri-areolar scar, well-perfused nipples without requirements for a free nipple graft, and infra-mammary fold scars. The scars can become hypertrophic especially if there are problems with healing or at their medial (sternal) ends. It is the patient-reported scar severity and scar visibility, rather than the clinicians’ view, that are correlated with psychosocial distress (19). Therefore, it is key that these three patients were pleased with the surgical outcome and eventual/ final scar burden of the procedure.

The Lalonde no-vertical scar mammaplasty technique was successfully used to reduce the breasts of three dark-skinned male patients with gynaecomastia. Satisfactory outcomes with which the patients are very pleased were achieved. In patients with gynecomastia, it is important to reduce the overall scar burden in order to improve patient satisfaction with the procedure. The benefits of scar minimization are perhaps of increased significance in patients who have darker pigmented skin due to their greater overall risk of keloid/ hypertrophic scar formation.

Informed Consent: Written informed consents were obtained from the patients for publication of the case report and any accompanying images.