Magnetic resonance imaging for invasive lobular carcinoma: is it worth it?

In the United Kingdom there are around 54,900 new cases of invasive breast cancer diagnosed each year (1). Invasive lobular carcinoma (ILC) of the breast is the second most common histological type of breast cancer with more than 1 in 10 cases of breast cancer being diagnosed as ILC (1). Due to its non-cohesive histologic growth pattern, low opacity and low likelihood of producing calcifications ILC is frequently not apparent with mammography and can provide diagnostic and therapeutic challenges (2).

The multifocality of ILC makes it more prone to incomplete surgical excision with reported re-excision rates after breast conserving surgery (BCS) in ILC ranging from 29–67% and conversion to mastectomy after failure of BCS in 20–49% (3,4).

Many studies have shown that tumour extent is more accurately determined when using contrast enhanced magnetic resonance imaging (MRI) compared to mammography and breast ultra-sound (3). MRI has a high sensitivity rate (approaching 100%) but has a false negative rate in the region of 4–12% and its specificity is lower at 65–79%. MRI has been shown to improve visualisation of ILC tumours (5). There has been some evidence that MRI reduces re-excision surgery in patients with ILC although this has been at the expense of increased mastectomy rates (6).

Current UK guidelines recommend the use of MRI if BCS is being considered for the management of ILC as well as if breast density precludes accurate mammographic assessment (7). The sensitivity of mammography is reduced in women with dense breasts (8) and mammographic density has been shown to be a strong independent risk factor for the development of breast cancer as malignant breast tumours are more likely to arise in the areas of greatest mammographic density (9).

The aim of this study was to assess the impact upon further investigation and subsequent management that MRI had on patients with ILC being considered for BCS. We also assessed if mammographic breast density was associated with additional findings on MRI.

A retrospective analysis of all patients diagnosed with ILC between January 2013 and December 2016 was carried out. Patients from both the screening and symptomatic diagnostic pathways were included. Patients were identified from the electronically held multidisciplinary team meeting (MDT) database. Patients were deemed suitable for BCS if it was felt by the MDT that clear oncological resection could be achieved without compromising the final cosmetic result, based on clinical, mammographic and ultrasound findings. At pre-operative consultation the operating surgeon discussed all surgical options (BCS or mastectomy) and if BCS was the preferred choice of the patient MRI was carried out. These MRI were further subjected to MDT review.

Patient and pathological characteristics were retrieved from the online results system (SCI Store v8.3, NHS National Services Scotland). The results from MRI scan and additional biopsies as a result of the MRI findings were retrieved in a similar fashion. The influence of such findings on the surgical therapy recommended was ascertained from careful reading of the electronically held version of clinical correspondence. All patients underwent MRI scan in the prone position using dedicated breast coils in the same hospital (Philips Achieva 1.5T©)

Mammographic breast density of all patients was assessed by a single consultant breast radiologist with extensive experience in both screening and symptomatic work. They were blinded as to the purpose of this assessment. Breast density was graded according to the Mammographic Breast Composition ACR Bi-RADS scale (10).

The results of MRI were noted and the impact on the management of patients being considered for BCS was noted, as was their final surgical therapy. The relationship between mammographic breast density and additional findings on MRI was also examined.

Since this project was viewed as a service improvement and audit study in the opinion of the NHS Highland RD&I Division, Research and Ethics Committee and formal management approval was not required. A letter of no objection was provided NHS Highland Research and Development Team.

Statistical analysis was undertaken using the VassarStats: Website for Statistical Computation (www.vassarstats.net). The relationship between mammographic breast density and MRI findings was compared using the Chi-squared test. A P value of <0.05 was considered statistically significant.

There were 110 women diagnosed with invasive lobular breast cancer. Sixty-eight women were from the symptomatic pathway and 42 from screening. Of these patients 95 (86.4%) underwent surgery with 69 (72.6%) considered potentially suitable for BCS following MDT discussion. MRI was carried out in 58 (84.1%) patients being considered for BCS. Eleven patients were unable to have a MRI prior to BCS as patients were claustrophobic, BMI too high or had a preoperative diagnosis of IDC on biopsy. Of the patients who went on to have a MRI scan, 22 (37.9%) had additional areas of potential concern not seen by either mammogram or USS. The outcome of these patients can be seen in Figure 1, with 9 patients having no further abnormality seen on second look USS but 13 patients requiring further core biopsies of abnormal areas. Following MDT review of the 58 MRI scans it was felt that 7 (12.1%) were no longer suitable for BCS. In 2 cases this was due to tumour size and in 5 patients due to multi-focality (with 4 confirmed on repeat biopsy). Following BCS 13 (26.5%) patients required further surgery due to positive margins being noted by pathologist. Seven patients underwent re-excision of margins with 6 patients going on to have completion mastectomy. It was noted that of the patients who required further surgery the preoperative MRI and any second look imaging did not appear to predict those patients whose final pathology noted residual multifocal disease. When size of tumour was reported on MRI it was accurate to within 5 mm of actual pathological size in just 49% of cases. 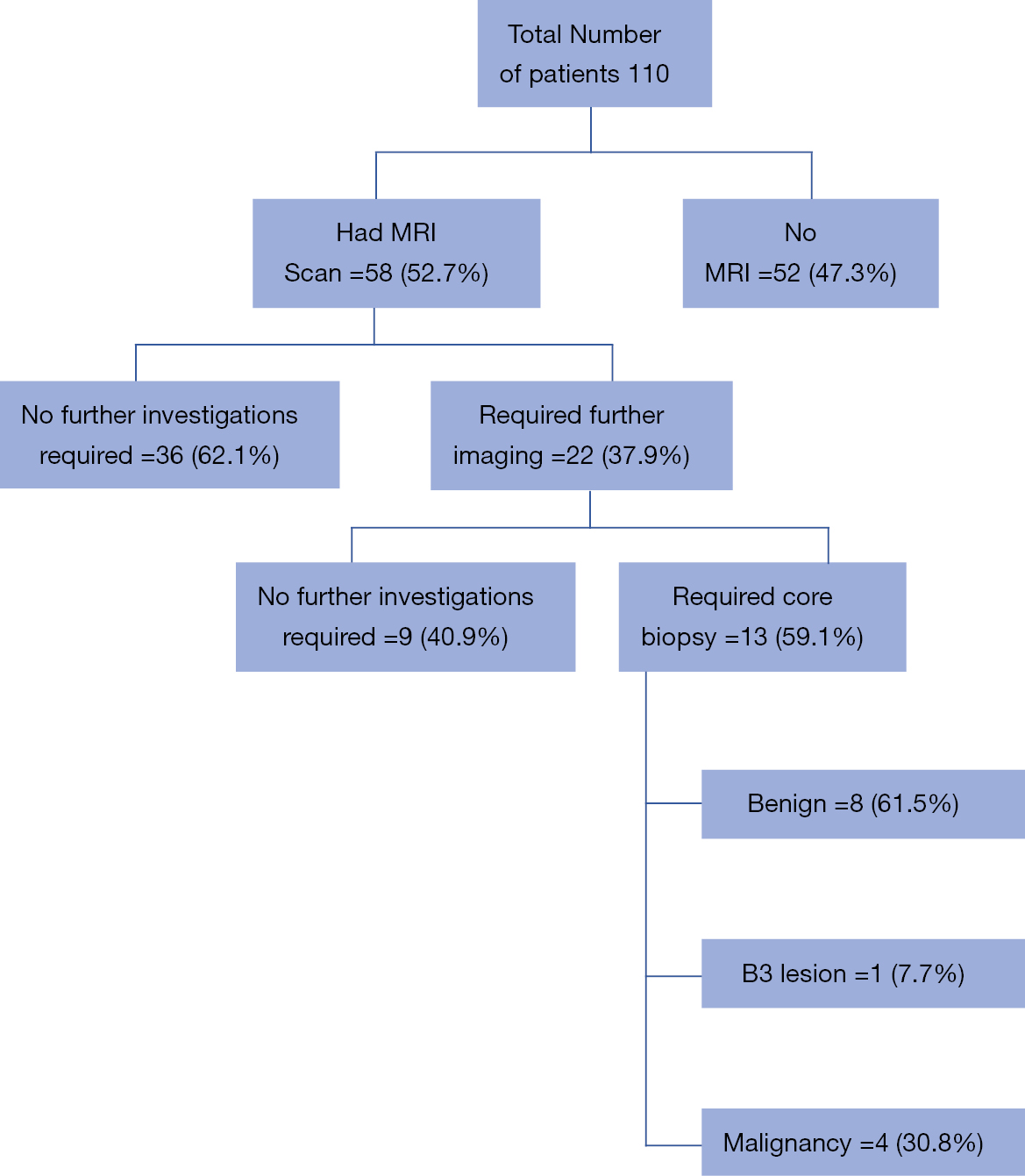 It is known that MRI assessment of breast cancer leads to an increase in the detection of additional disease however there is currently no evidence of reduced rates of recurrence or disease-free survival with the use of preoperative MRI (6,11-13).

Improved sensitivity of MRI is known to come at the expense of reduced specificity (12,14). Preoperative MRI resulted in additional investigations being required in 37.9% of our patients delaying initial surgical intervention. Whether this delay to surgery would result in an effect on patients’ long-term survival and recurrence rate cannot be assessed but is unlikely. It is important though to consider the psychological burden this delay to treatment and the additional investigations required based on MRI findings may have on patients. A diagnosis of breast cancer is known to cause considerable anxiety and psychological distress in “waiting” patients and therefore any delay may be significant (15). Berg et al. noted a 12% “unnecessary mastectomy” rate due to patient’s decisions to undergo mastectomy rather than additional imaging and biopsy of abnormal MRI findings (14,16). There were in total 13 women in our cohort who opted for mastectomy when BCS was a potential option. It is difficult to pinpoint specific reasons for this decision but it may have been in part driven by the wait for MRI and potential uncertainty associated with any additional findings.

There is limited data available on the cost-effectiveness of MRI in this setting but it has to be acknowledged that there is a resource burden associated with its use (9,15). The use of the MRI itself as well as the need for repeat imaging and biopsies will have costs as well as the time taken to analyse results and discuss them in the multi-disciplinary team forum.

The rate of change in management (from BCS to mastectomy) was 10.1% in keeping with results from a meta-analysis of non-randomised studies assessing the clinical value of preoperative MRI (6,17,18). After reviewing final pathology specimens for multifocality and size of tumour one patient was found to have undergone a pathologically avoidable mastectomy which is concerning but with this rate being 1.7% it does correlate to the rates quoted in the literature. Houssami et al. concluded that MRI staging causes more extensive surgery in an important proportion of women (11.3%) by identifying additional cancer however there is a need to reduce false positive MRI detection (18,19). The data from our group of patients appears to support this.

A proportion of 26.5% of patients in our study group required a re-excision or completion mastectomy which is a similar rate (20–49%) to that seen in other studies (3,4,18,20). Based on the data from our group of patients there appeared to be no benefit from preoperative MRI as it did not detect multifocal disease in these cases and was unable to prevent the need for a second operation.

There was no correlation between increased breast density (Bi-RADS C-D) and additional findings on MRI. We felt that perhaps those ladies with more lucent breasts on mammogram may be less likely to have additional MRI findings and hence avoid the delay to surgery that further investigations would represent. However our sample size is modest and a larger sample may have borne out such findings.

There are several limitations to our study. Firstly, the non-randomised and retrospective nature of this study should be taken in to account. Secondly, women undergoing MRI had a mean age of almost 10 years younger than those who did not undergo MRI. We have to consider whether this is selection bias towards BCS in younger patients and is this a preference of surgeons or patients. It is unknown if the need for MRI played a role in the patient’s decision making regarding BCS but may be an important factor to be considered in further research; we know that 19% of women in our group considered for BCS chose mastectomy. It is important to take in to account that the patients in our study group tended to have less dense breasts overall (63.8%) and so to assess this further we would recommend a larger sample size of higher density breasts be reviewed before conclusions are drawn. Since our group of patients had pathological diagnosis of ILC care must be taken when extrapolating our findings to other types of breast cancer.

In conclusion the use of MRI when assessing ILC for BCS rarely identifies additional disease that changes the surgical approach. However in this sample breast density did not predict MRI findings and therefore cannot be used to rationalise the use of MRI in this setting. Further prospective studies with larger patient populations are needed to assess this issue in the future.