The American Society of Breast Surgeons (ASBrS) Nipple Sparing Mastectomy Registry (NSMR) is an ongoing, prospective, IRB approved, non-randomized, multi-institutional registry housed within the mastery of surgery, ASBrS. The purpose of the ASBrS NSMR is to prospectively collect data informative of the procedure itself including metrics utilized, techniques utilized, aesthetic outcome and oncologic outcome to provide evidenced based medicine on outcome measures and metrics utilized for the nipple sparing mastectomy (NSM). An NSM by definition entails excision of all breast tissue, including all breast tissue behind the nipple areola complex (NAC), while preserving the overlying skin envelope, including the NAC.

Basic science research has better defined breast anatomy, including the relationship of terminal ductal lobular units to the nipple (1) and nipple microvasculature to ductal anatomy (2). This enhanced understanding of the NAC in combination with outcome data on recurrence (3-8), patient satisfaction and quality of life (9-14), infection complication rates (15-26), reconstruction techniques (24-45), incision recommendations (46-52) with concomitant evolution of indication (15-19,52-54) and oncologic criteria from tumor size and location (55-65) to considering the nipple as just another margin (66) has resulted in a larger population women eligible for NSMs.

Ease and feasibility of this registry was demonstrated in a pilot conducted at Stamford Hospital, CT; Georgetown, Washington DC; and Columbia University College of Physicians & Surgeons, NY. The registry is ongoing for 10 years with a target N of 2,000 participating patients. Participating surgeons routinely offer NSM, have performed at least 3 prior to registry participation, are enrolled in the Mastery of Breast Surgery Program, and in accordance with the following: IRB approval, ASBrS NSMR Protocol (v.3 07.2014), Consent to act as a participant in the ASBrS NSMR, and Investigator Agreement. This assessment of data occurred at 74 months initiation of the registry.

Justification of the registry

The ASBrS is an organization dedicated to furthering knowledge of breast cancer identification, prevention, and treatment. The purpose of this Registry is to provide a large, prospective, non-randomized database of patient characteristics, tumor characteristics, surgical technique, and outcome (both aesthetic and oncologic) of the NSM. This data will contribute to direct comparisons of other surgical procedures for treatment and risk reduction of breast cancer.

Contributors to the ASBrS NSMR include 98 surgeons from 70 sites.

Data is entered into the ASBrS NSMR, housed within the Mastery of Surgery Program, after patients consent to participation. Each investigator has obtained IRB approval and completed forms of agreement to participate in the ASBrS NSMR. BioStat Inc performed statistics and analysis of data. An internal systematic review defined a subset population (a “per protocol” population) with complete surgical and outcome data, N=1,935 which was used for this analysis. The identified subset was compared to the entire population of entries and found to be consistent thus eliminating concern for bias. Statistical analysis performed via SAS, includes: Fisher’s exact test, pair wise P-value, Bowkers test of Symmetry, and Descriptive analyses. 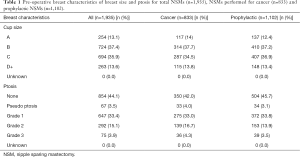 Prior XRT and NAC complications

Although the majority of NSMs with a history of XRT either had no NAC complications (85%) or epidermolysis with full recover (96%), there was more NAC necrosis and ischemia requiring surgery than in patients without a history of breast XRT (P=0.0002), mantle/other XRT (P=0.0177).

Prior XRT and flap infection

No significant difference in incidence of flap infection was noted between NSMs with a history of breast XRT (P=0.1657) or mantle/other XRT (P=0.7989).

Prior XRT and cosmesis and patient satisfaction

A 1.4% (n=12) recurrence rate (mean follow-up of 31 months, median follow-up of 27 months), with a range of 9.7–58.3 months since surgery was noted. Of the 12 recurrences: none were at the nipple/NAC, 1 local tumor site, 3 local/not at tumor site, and 8 distant. Recurrences were too few to assign any meaning to tumor biology or characteristics.

Of the 912 RA margin specimens sent only for permanent assessment: 0.9% (n=8) demonstrated invasive cancer, 0.8% (n=7) DCIS, and 0.2% (n=2) atypia, thus there was a 1.9% risk of additional excision (nipple and/or NAC) postoperatively secondary to a permanent path result of invasive cancer or DCIS.

Any variation between patient rated satisfaction and surgeon rated cosmesis?

Incision and incidence of flap infection

RA dissection performed with a plasma knife was associated with the lowest incidence of flap infection (P<0.0001) (Table 3).

The NAC of 9.6% of all NSMs received treatment including: topical treatments 4.5%, debridement 2%, NAC excision 2.2%, and other/unknown treatment 0.9%.

Cosmesis and patient satisfaction in setting of flap infection

A direct comparison of TE and DI yielded a lower incidence of flap infection with DI (2.5%) than TE (5.4%) (P<0.0001). Fewer NAC complications (including epidermolysis with full recovery, necrosis, and epidermolysis/ischemia requiring surgical debridement) were also noted in DI vs. TE (P<0.0001) (Table 5). 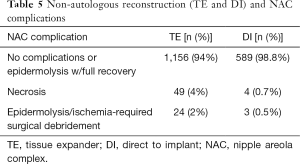 Comparison of NSMs by indication: prophylactic vs. cancer 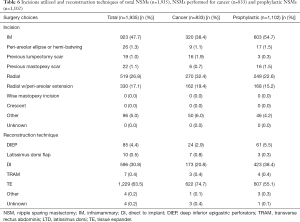 Comparison of cosmesis and patient satisfaction between indications

NSMs were performed for indications of cancer and prophylaxis utilizing multiple incisions, dissection techniques, and reconstruction options on a variety of breast shapes and sizes with a recurrence rate of 1.4% and an occurrence rate of 0.3% (none at the nipple/NAC), overall patient satisfaction of 95%, cosmesis 96%, 4.4% flap infection rate, 10% epidermolysis with full recovery, and 4.5% NAC complication rate (not including epidermolysis with full recovery).

The data presented here represents the work of many breast and plastic surgeons in private practice, community hospitals, and tertiary care centers across the U.S. demonstrating the feasibility of performing a NSM successfully with high patient satisfaction rates and acceptable infection rates via multiple techniques of dissection, incision placement and reconstruction type. Follow-up will continue to document recurrence and occurrence rates.

An NSM entails excision of all breast tissue and preservation of the overlying NAC. When performing a NSM, the dissection plane immediately behind the NAC is immediately adjacent to the dermis. The tissue immediately under the NAC is typically referred to as the RA margin, and is typically separately assessed as a pathology specimen. Excising this margin includes all underlying parenchyma and fat, leaving exposed dermis.

Conflicts of Interest: SD Mitchell receives honorarium and stock options from Invuity for her role on their Advisory Council and as Speaker and Consultant; SC Willey is on Speakers Bureaus for Pacira, Genentech, Invuity, and Medtronic, and on the Scientific Advisory Board of TransMed7; P Beitsch targeted Medical Education, Principle; S Feldman has no conflicts of interest to declare.

Ethical Statement: Participating surgeons routinely offer NSM, have performed at least 3 prior to registry participation, are enrolled in the Mastery of Breast Surgery Program, and in accordance with the following: IRB approval, ASBrS NSMR Protocol (v.3 07.2014), consent to act as a participant in the ASBrS NSMR, and Investigator Agreement. This assessment of data occurred at 74 months initiation of the Registry.