Hypocalcaemia is the commonest complication after bilateral thyroid resection. Its true frequency can, however, be difficult to estimate from the published literature, which largely comprises reports of retrospective case series. These are prone to various biases, which can substantially influence the reported rates of hypocalcaemia. These limitations include:

Prospective registries, such as the British Association of Endocrine and Thyroid Surgeons (BAETS) Registry [now known as the UK Registry of Endocrine and Thyroid Surgery (UKRETS)] may provide more realistic estimates of hypocalcaemia rates, by avoiding some of these biases. As will be discussed below, however, problems in interpretation still exist.

The initial concept of the BAETS Registry was to collect data on the main outcomes of endocrine surgery, carried out by members of the BAETS. After an initial trial period, data collection began in 2000. The initial extent of variables collected for each operation was limited, and data were submitted by surgeons, via a paper pro-forma, prior to central collation and analysis. In 2004, the Registry moved to an electronic, web-based platform, operated in conjunction with Dendrite Clinical Systems, and remains in this format. The Registry currently contains data on over 90,000 endocrine operations, of which the majority are thyroidectomy. Around 110 members currently contribute data on their thyroid operations.

Over the intervening years, the electronic pro-forma has evolved, with the addition of several variables, and with addition/clarification of the definitions of some variables, including those for hypocalcaemia, as discussed in more detail below. The full list of variables currently collected can be accessed in the appendix to the latest (presently the 5th) national report of the Registry (2).

Interpretation of outcomes reported from the Registry should be informed by the following points:

Outcome variables and their definitions in UKRETS

Since 2010, the database has had uniform pre-set fields defining the extent of resection (both thyroid and nodal) for each side of the neck individually; and for the presence and extent of any previous thyroid surgery.

For thyroid resection, the pre-set options are: lobectomy; sub/near-total lobectomy; biopsy; other.

This specifically refers to the presence of hypocalcaemia during the index admission.

Since September 2010 the definition has been: ‘corrected serum calcium <2.10 mmol/L or ionized calcium <1.2 mmol/L on the first post-operative day’.

Pre-set options are Yes and No.

Consistency in applying the definition is aided by a ‘pop-up’ dialog box, adjacent to the relevant data field within the electronic pro-forma.

The exact values of serum calcium for each patient are not recorded, either pre- or post-operatively nor are values for parathyroid hormone (PTH). The database cannot therefore assess the severity of hypocalcaemia, nor accurately determine if it is due solely to hypoparathyroidism. The presence or absence of hypocalcemic symptoms is also not recorded.

This is recorded both for during the index admission and at follow-up.

During the index admission, this outcome is recorded as: ‘Hypocalcaemia treatment given’—Yes or No.

The type, route and dose of such treatment are not recorded.

At follow-up, outcome is recorded as: ‘Is the patient on calcium and/or vitamin D supplements to maintain normocalcemia at 6 months?’—Yes or No.

This definition has been in place since September 2010. Given the wording of this definition, it is likely that most patients still requiring supplements at this stage post-operatively will do so due to hypoparathyroidism. Some patients amongst this cohort will, however, subsequently recover further parathyroid function and may be able to discontinue calcium/vitamin D supplements at a later date. The rate of ‘late hypocalcaemia’ recorded in the UKRETS does not therefore necessarily equate to ‘permanent hypoparathyroidism’.

Again, the type and dose of such treatment are not recorded, hence, it is not possible to assess the severity of such presumed persistent hypoparathyroidism.

Hypocalcaemia after bilateral thyroidectomy in UKRETS

The data referred to below are partly extracted from the 5th national report of the UKRETS (2), and refer to cases operated in the 5-year interval between July 2010 and June 2015 (during which time the above definitions were largely stable). For this report, data were extracted for analysis some 9 months after the last date of operation, allowing time for late outcomes to be ascertained and recorded.

Excluding cases with missing data, the rate of early hypocalcaemia (low calcium on post-operative day 1, according to the above definition) after first-time total thyroidectomy is 23.6% [95% confidence interval (CI), 22.7–24.5%]. This headline rate has been quite stable since the inception of UKRETS; a slight reduction over the last decade probably representing the application of stricter definitions of hypocalcaemia than a true reduction in the rate of this complication.

The severity of hypocalcaemia is not recorded in the UKRETS database, but around 90% of these hypocalcemic patients are nonetheless treated with calcium +/− vitamin D supplements, as shown in Figure 1. 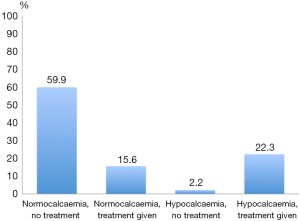 The true rate of early hypoparathyroidism is difficult to ascertain, due to variation between surgeons with respect to their thresholds for treating hypocalcaemia and in their usage of prophylactic calcium supplementation, plus the fact that information on corresponding PTH levels is not collected. It is apparent from Figure 1 that, whilst most hypocalcemic patients receive treatment with calcium/vitamin D supplements, a significant proportion of ‘normocalcemic’ patients also receive treatment. This might represent some surgeons’ use of ‘prophylactic’ treatment, perhaps to expedite early discharge, or the treatment of hypocalcaemia which is mild (i.e., a calcium level below normal but above the 2.1 mmol/L definition used in UKRETS) or delayed beyond the first post-operative day. A small number of cases become hypocalcemic, but are not treated, presumably due to spontaneous recovery of serum calcium on further testing, or some surgeons’ preference to treat mild hypocalcaemia conservatively.

Overall, some 40% of patients are discharged on calcium and/or vitamin D supplements after first-time total thyroidectomy.

Table 1 details the outcomes with respect to the extent of thyroid resection and with re-operative surgery.

For first-time surgery, there is a small trend towards lower rates of early hypocalcaemia with sub/near-total resections, compared to total thyroidectomy. This might reflect improved preservation of early parathyroid function from the more limited dissection; equally, however, total thyroidectomy is more likely to be used for malignant disease, where concomitant central compartment lymph node dissection may also be undertaken, so these differences might be due to disease-specific considerations.

By 6 months follow-up, there are no significant differences in the need for calcium/vitamin D supplements between first-time total thyroidectomy versus less than total bilateral resections. Re-operative surgery has a slightly higher incidence of such late hypocalcaemia compared to first-time bilateral surgery. This is intuitive, given the greater difficulties in identification and preservation of parathyroid glands in re-operative surgery.

The 4th national report of the UKRETS (3) identified patient-, disease- and procedure-specific factors, which influenced the rates of both early and late hypocalcaemia after bilateral thyroid resection. Patients developing hypocalcaemia were slightly younger and more likely to be female, but in multi-variate analysis, the most relevant factors were: the primary pathology leading to surgery; the addition of central neck nodal dissection (level VI) to bilateral thyroidectomy; and re-operative versus first-time surgery.

The findings from that report are reiterated in analysis of the data extracted for the 5th national report, summarized here in Table 2.

It seems apparent that:

Following surgery for Graves’ disease, there is a higher early requirement for calcium supplementation than after a similar extent of thyroid resection for multi-nodular/colloid goitre. By 6 months, however, much of this effect is lost. This might reflect the metabolic effects of thyrotoxicosis on bone turnover shortly after surgery (‘hungry bones syndrome’), or that temporary compromise of parathyroid function is commoner, due to the inflammatory process surrounding the thyroid in Graves’ disease.

In contrast, surgery for cancer is significantly more likely to lead to hypocalcaemia, both early and at 6 months, and much of this effect seems to be related to any concomitant central nodal dissection. This is intuitive as such dissection is more likely to lead to inadvertent excision of parathyroid glands or to compromise of their vascular supply.

Differences may also exist between surgeons with respect to rates of hypocalcaemia experienced by their patients. Such differences in early hypocalcaemia are difficult to assess, due to marked variation between surgeons in their usage of ‘prophylactic’ calcium/vitamin D supplements during the index admission, referred to above. Some surgeons do this very selectively, whilst others do so almost universally. By 6 months post-operative, however, most patients treated in this way should have discontinued calcium supplementation, and it is likely that the continued need for calcium/vitamin D supplements at this stage would represent ongoing hypoparathyroidism.

Figure 2 demonstrates the variation between surgeons in the rate of such ‘late hypocalcaemia’, as a function of case-load. It is apparent that there is a significant difference between surgeons’ rates of hypoparathyroidism after bilateral thyroidectomy. This may be due to:

The exact contribution of each of these factors is difficult to assess from the current dataset, but it seems likely that the surgeon him/her-self is an important determinant of outcome with respect to persistent hypoparathyroidism after thyroidectomy.

The current design of the UKRETS dataset limits analysis of other potential risk factors. For instance, goitre size/weight is not recorded, and the degree of retrosternal extension is a relatively new field, so that data on this factor are not yet sufficiently robust to make any conclusions. Also, data are not collected on various aspects of surgical strategy, such as the number of parathyroid glands visualized and/or auto-transplanted; nor are data on pre- or post-operative biochemical variables, such as exact levels of serum calcium, vitamin D or parathyroid hormone (PTH) levels, nor the use of pre-operative vitamin D supplementation to correct any identified deficiency.

The need for simultaneous parathyroidectomy, for instance to manage concurrent hyperparathyroidism, is not recorded, and the above series will therefore include some patients undergoing combined thyroid and parathyroid surgery. This may lead to an over-estimate of the extent of hypoparathyroidism after thyroidectomy alone, although the proportion of patients undergoing such combined procedures will be low, and not likely to influence greatly the conclusions which can be drawn.

Finally, for re-operative surgery, the exact details of the previous operation are not defined.

Surgeons contributing data to the Registry come from a variety of surgical sub-specialties, including general, endocrine, ENT, vascular and transplant surgery. However, such subspecialty interests are not currently recorded in the database. Hence it is not possible to examine the interesting hypothesis that outcomes might relate to subspecialty training.

The UKRETS database has matured sufficiently to provide valuable information on the incidence of hypocalcaemia arising after thyroidectomy in routine practice in the UK—at least when performed by BAETS members, who are likely to sub-specialise in endocrine surgery to a significant extent.

Some limitations exist with respect to data completeness, particularly for late hypocalcaemia (6 months post-operative), but it seems apparent that:

Hypocalcaemia remains the commonest complication of total/near-total thyroidectomy. Methods to improve surgical performance in this regard seem worthy of investigation.

The membership and Executive of the BAETS are thanked for their efforts in data collection to the UK Registry, and in their willingness to publish the outcomes derived from these data.