Use of acellular dermal matrix (ADM) in nipple reconstruction: the ‘central-pillar technique’

Standard skin flaps for nipple reconstruction are raised. Our usual preference is an arrow flap technique (Figure 1). A 3 cm × 3 cm sheet of 1 mm thick SurgiMend (TEI Biosciences, Boston, Mass.) is divided into three 3 cm × 1 cm rectangles (unit cost £230 excl. VAT). One of the 3 cm × 1 cm rectangles is rolled moderately tightly between the forefinger and thumb with the aid of a Gillies forceps into a “Swiss-roll” tube (Figure 2) and held in place with a 3/0 un-dyed vicryl suture. This forms the central pillar of the nipple reconstruction. A separate 3 cm × 1 cm strip is divided into three 1 cm × 1 cm squares (Figure 2). Adequate ADM is available for a bilateral case by rolling the second of the 3 cm × 1 cm strips that is used in conjunction with a further 1 cm × 1 cm square. In the arrow technique, a de-epithelialized disc forms the base on which the raised nipple reconstruction rests, reducing the possibility of the nipple falling into the space created by raising the flap. The 1 cm × 1 cm square acts as a platform and is secured onto the de-epithelialised base with 3-0 polydioxanone sutures (Figure 3). The rolled cylinder of ADM is then supported by positioning it onto this base to allow it to act as the central pillar of the re-created nipple (Figure 4). The wings of the raised nipple flap are then sutured around the central pillar. The partial thickness skin flap originating from the disc that forms the base of the nipple is used to close the top of the nipple reconstructions (Figure 5). 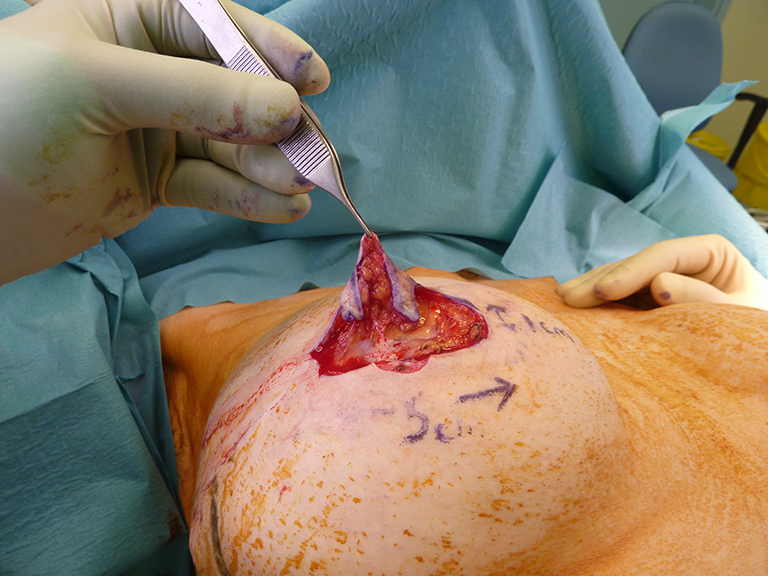 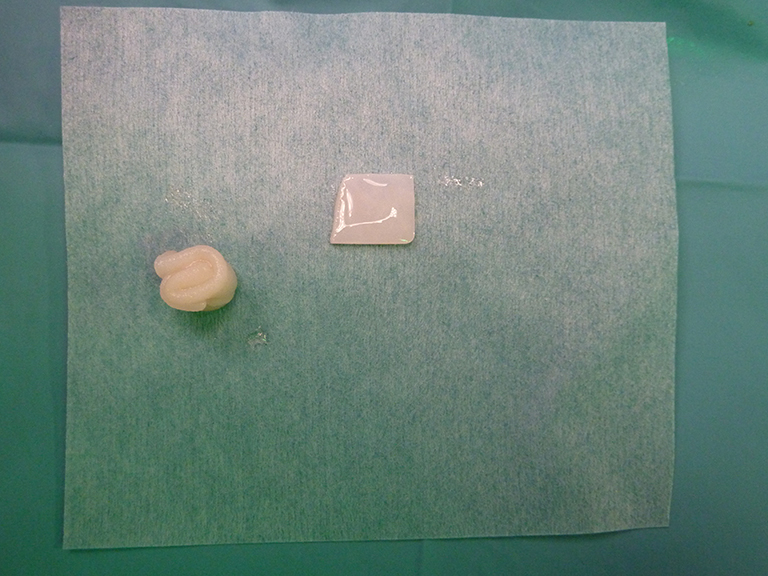 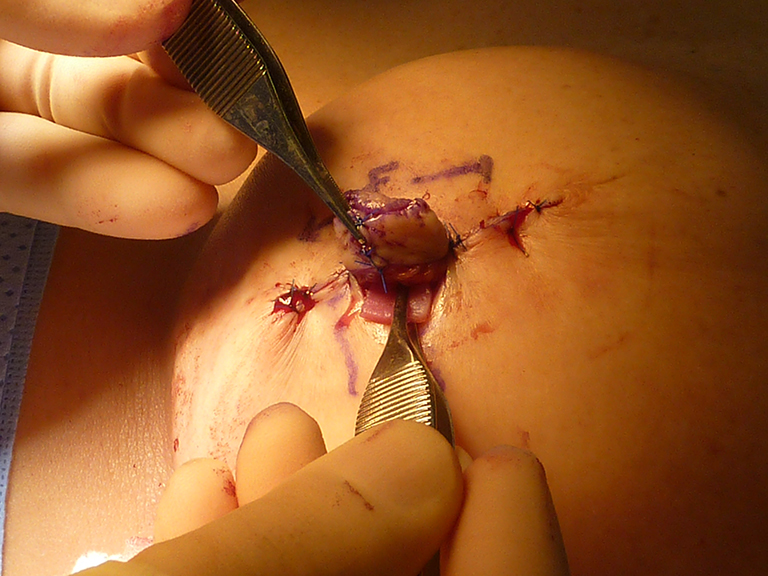 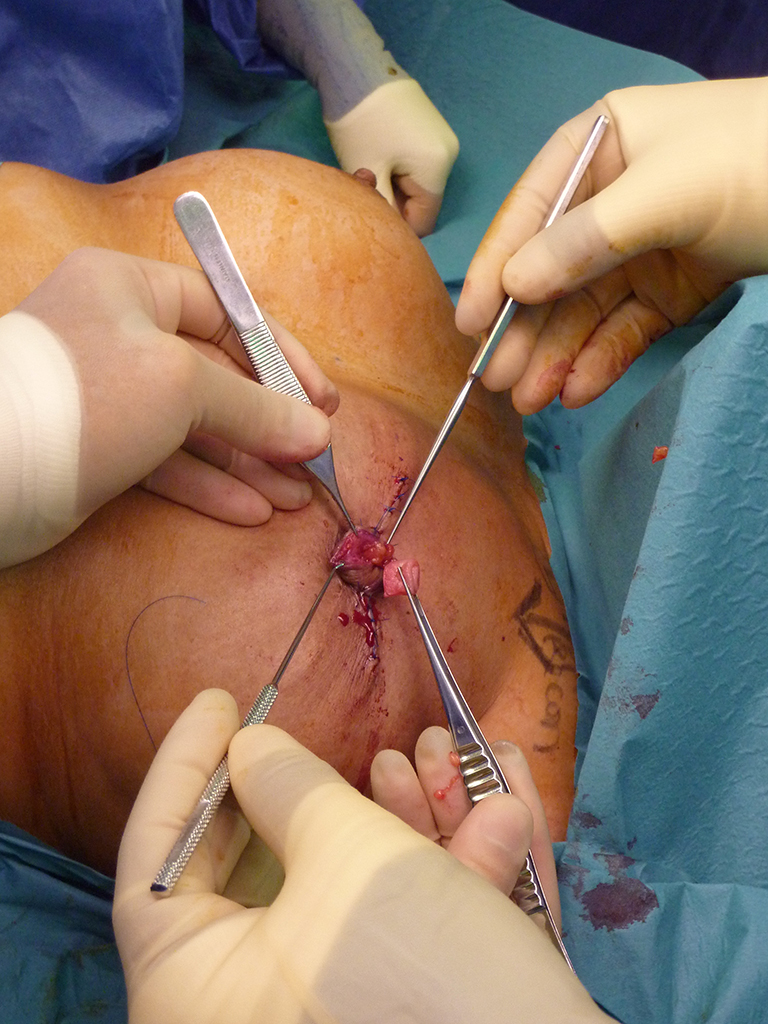 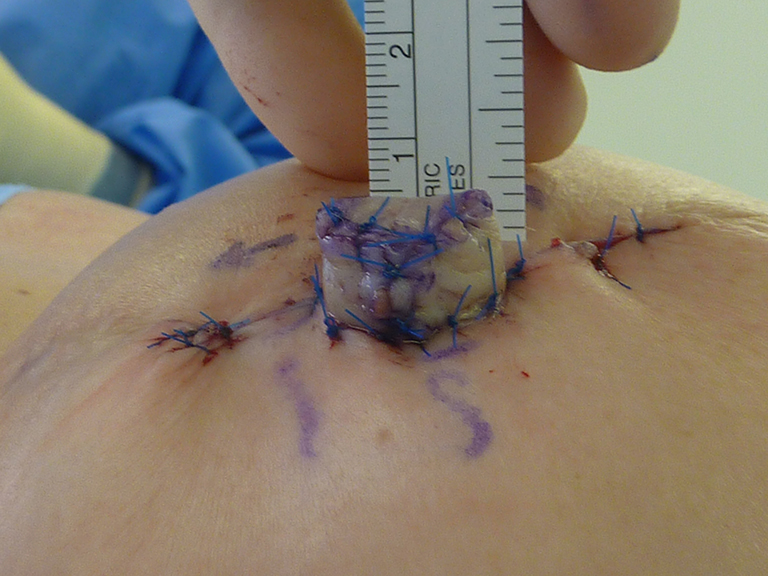 Data was collected prospectively on a consecutive series by a single surgeon including patient demographics, previous procedures and adjuvant therapies. Nipple projection and diameter was measured using callipers at the end of the procedure, 6 months post-operatively and 12 months post-operatively. Inclusion criteria for use of the technique were either primary patients noted to have exceptionally thin dermis over the reconstructed breast or revision cases of primary reconstructions that had flattened. 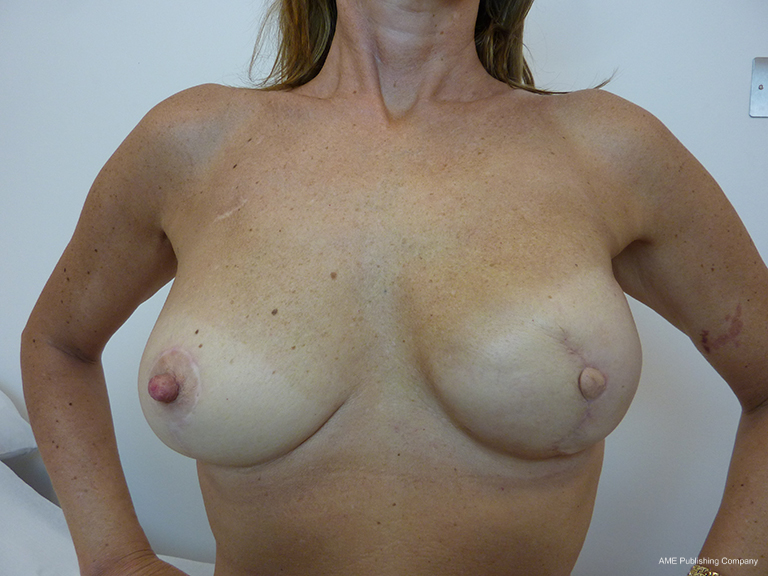 Figure 6 Post-op result in a secondary nipple revision with ADM after flattening of the primary reconstruction. ADM, acellular dermal matrix. 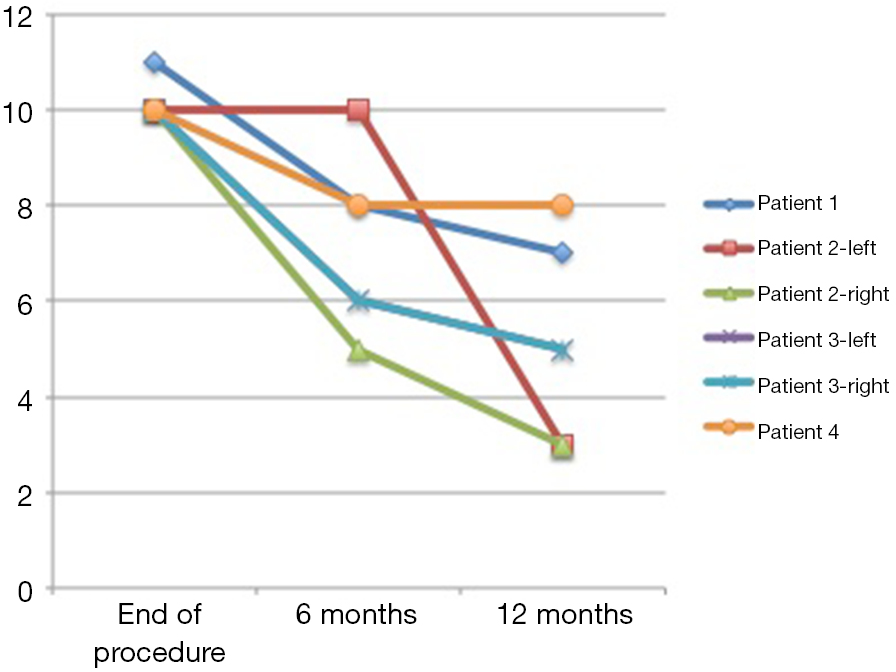 Of the secondary nipple reconstructions for revision of a previous procedure that had completely flattened the average nipple projection at the end of the procedure was 11.5 mm and at 12 months post-operative was 5.3 mm (Figure 8). This represents a similar 46% preservation of nipple projection. Average diameter was 11.5 mm at the end of the procedure and 9.2 mm at 12 months showing 80% preservation. 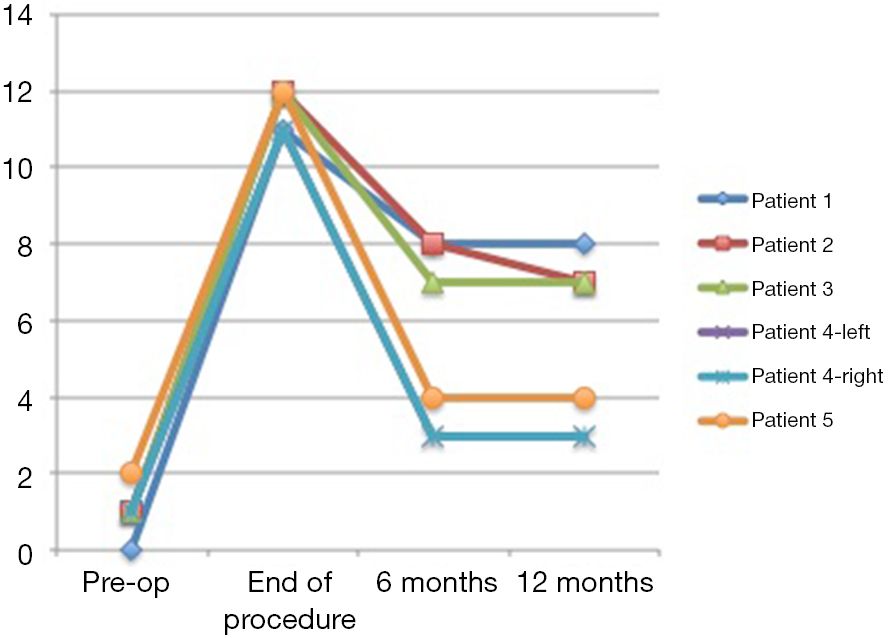 Twenty percent patients (3/13 reconstructions) had a loss of nipple projection of greater than 60% and required a further procedure. Both of these were in the revision group. No patients had either partial or complete extrusion of the ADM or any other complications. One patient in the primary group had loss of 70% projection in bilateral reconstructions, but was happy with the result and did not require further revision. The other reconstructions maintained an average of over 60% projection at 12 months.

There have been a number of review articles discussing the advantages and disadvantages of different nipple reconstruction techniques (6-9). However, loss of projection in nipple reconstructions remains a common problem that is often difficult to predict. Patients with very thin skin often prove the most difficult and give the least predictable results particularly if they have large contralateral nipples. In our experience, patients who have already had a failed reconstruction are also at high risk of flattening again.

Several methods have previously been described to augment nipple reconstructions and reduce or treat loss of projection. These have included the use of numerous autologous materials such as rib cartilage (2), auricular cartilage (10), dermal grafts (11) and fat grafts (12). Many of these materials involve introducing a donor site for graft harvest. Nipple reconstructions are usually local anaesthetic procedures in skin with reduced sensation and are thus exceptionally well tolerated by patients. The use of these extra donor sites can be painful, less well tolerated, require longer procedures and sometimes general anaesthesia. They also tend to have more variable results and higher complication rates so are now largely of historical interest only.

Non-autologous methods of nipple augmentation have included the use of artificial bone (13), polyurethane coated silicone (14) and the injection of polymethylmethacrylate microspheres suspended in bovine collagen (15). However, the clinical experience of many surgeons who have used synthetic products have been variable with problems of extrusion perhaps being most common.

One group that used synthetic collagen cylinders derived from porcine small bowel submucosa reported an extrusion rate of 5% (4). Nahabedian first described the use of a folded piece of human derived ADMs (AlloDerm, LifeCell Corp., Branchburg, NJ, USA) with C-V flaps for four patients with previous flattening needing secondary nipple reconstructions (5). Rolled Alloderm nipple reconstructions were then described with skate flaps in primary reconstructions with maintenance of projection of 47–56% (16). A more recent paper suggested a variety of ADM constructs using a human derived product made in Korea (MegaDerm, L&C Bio Corp., Seoul, Korea) in primary nipple reconstructions; depending on the type of underlying breast reconstruction, the authors reported average maintenance of projection of around 70% at 9 months (17).

Other reconstructive techniques have mainly involved composite grafts from elsewhere as the whole nipple reconstruction. This has included nipple sharing procedures (18,19) and the grafting of free toe pulps (20,21). Nipple sharing procedures are sometimes popular in women with a lot of natural projection on one side who are happy to sacrifice a degree of function on the donor site to create two nipples with half as much projection. The use of toe pulps are now of historical interest only.

Our results presented here suggest that nipple reconstructions with the foetal bovine-derived ADM SurgiMend (TEI Biosciences, Boston, Mass.) achieve comparable results to human-derived alternatives previously (5,16,17,22). The extra expense of using a small piece of ADM appears to be justified by the comparative reliable maintenance of both projection and diameter of the reconstructions in patients. The patients included in this study were at greater risk than usual of flattening to a degree that would otherwise require a further procedure. A 3 cm × 3 cm piece is sufficient for two reconstructions so no extra cost is incurred for bilateral cases. There were no other complications in this series. The technique also appears safe in radiotherapy fields and has similar results when used in thin mastectomy tissue directly over an implant compared to thicker autologous tissue over a smaller implant. This technique was not used in purely autologous reconstructions, but is likely to have similar outcomes. The only disadvantages of using ADMs in this setting are the modest cost implications, which we feel are warranted, and the theoretical increased risks of either flap necrosis or implant extrusion, which was not seen in our series.

Our results suggest that the ADM central pillar helps to maintain long-term projection as a relatively solid block without being reabsorbed in nipple reconstruction. The de-epithelialised dermal base, reinforced with the 1 cm × 1 cm sheet of ADM, also appears to help prevent late retraction back into the subcutaneous tissue. A randomized controlled trial would provide direct comparison of long-term projection to a control group without ADM augmentation.

The Royal Marsden is an NIHR Biomedical Research Centre and this support is acknowledged. The authors are also grateful to TEI Biosciences for a research stipend that part funded this study.

Conflicts of Interest: These authors have no conflicts of interest to declare.