Trans-oral endoscopic thyroidectomy is a natural orifice transluminal endoscopic surgical procedure (NOTES) which enables surgeons to remove the thyroid gland without leaving any visible skin scars (1). The widely used three-dimensional (3D) endoscopic system provides surgeons excellent depth perception to identify anatomic structure correctly and precisely in operation. However, wearing a pair of polarized glasses reduces light quality of the picture displayed on the screen. Moreover, the formation of fog as a result of a surgeon’s breath interrupts the continuity of the procedure. The glasses-free 3D system can overcome the disadvantages noted above. Herein, we report our first case-serial of trans-oral endoscopic thyroidectomy by means of our newly developed glasses-free 3D endoscopic system. A search of the Literature revealed no similar reports, implying our cases may be the first reported on trans-oral glasses-free 3D endoscopic thyroidectomy in the world.

Four patients underwent trans-oral glasses-free 3D endoscopic thyroidectomy for thyroid goiter from July, 2016 to October, 2016. Their clinical characteristics and operative outcomes were collected and reviewed. The mean BMI of the four patients was 20.98±2.91 kg/m2. Preoperative examination found no evidence of malignant disease and no evidence of hyperthyroidism. None of the four patients had history of previous neck surgery or radiotherapy. The dominate nodule of the thyroid was no more than 5 cm in diameter in all patients.

The Glasses-free 3D tracing and display systems (Super Med View Zhuhai Mingyi Medical Technology Co., Ltd, Zhuhai, China) were developed by our hospital and have been used successfully in thoracoscopic surgeries. In detail, the 3D video signals are obtained from a 3D endoscopic system. Signals are then synthesized and displayed on a screen covered with a lenticular lens array. The coordinates of the left and right pictures are calculated and displayed on the screen according to the tracing signal emitting from the head band worn by the surgeon. The tracing signals are detected by the left and right sensors on the top of the screen, essentially following the movements of the surgeon to ensure a clear view at any angle (Figure 1).

Figure 1 Surgeons and the glasses-free device in operation. (A) Surgeons, nurses and the monitor position in surgery; (B) eyes position single head band emitter worn by the surgeon, the assistant next to the surgeon wore a pair of polarized glasses to watch another 3D screen.

Patients were placed in a supine position with a shoulder roll placed under the back to help extend the neck. A curved position signal emission device was worn by the operator. Calibration was done to ensure a well synthesized image was viewed by the operator. General anesthesia was induced by trans-oral tracheal intubation. A curved incision was made at the lower lip. Inflation solution (1:500 epinephrine solution) was injected into the subcutaneous tissue just beneath the platysma. A blunt dissection was introduced to separate the subplaysma from the deep fascia. The inflation solution was then squeezed out of the space. A central 12 mm trocar and two bilateral 5 mm trocars were inserted. CO2 at the pressure of 8 mmHg was then insufflated to create a primary working space. A 10 mm 3D endoscope was inserted through the middle 12 mm trocar. Under camera monitor, sharp dissection was introduced to further expand the working area to create large enough space for further procedures. Cervical Alba was incised and the strap muscles were separated and retracted laterally. Isthmus of thyroid was resected and the lobe of thyroid was lifted up; the superior thyroid pedicles were then coagulated and dissected by harmonic scalpel. Dissection was continued along the back of the thyroid. The recurrent laryngeal nerve and the parathyroid glands were seen and protected. The inferior thyroid vessels were also coagulated and divided. The resected specimens were packed in a specimen bag and retrieved. The Operative area was rinsed with NS to confirm no hemorrhage and to remove all the potentially cast-off thyroid cells or tiny tissues. Finally, the cervical Alba was sutured by 3–0 absorbable thread and the lower lip incision was sutured with 5–0 absorbable thread. Intra-operation findings were shown on Figure 2. 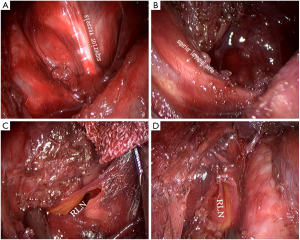 The mean operative time was 189.00±39.14 min, and mean Intraoperative blood loss was 7.50±2.89 mL. Post-operative recovery was smooth. Postoperative hospitalizations were 5 days. No intraoperative or postoperative complications were found. All patients expressed satisfaction with the cosmetic results. The pre-operation and post-operation photograph taking from one of the fore patients was showed on Figure 3.

Trans-oral endoscopic thyroidectomy was first applied clinically by Dr. Wilhelm et al. in 2009 (1). The excellent cosmetic result granted it attention around the world. However, the trans-oral floor access had the disadvantage of adjusting the observation angle and makes it difficult to remove a relatively large specimen. Later Japanese and Chinese surgeons developed a totally oral vestibule access to overcome these disadvantages (2,3). Compared to axillary or breast areola approaches, the trans-oral approach offers the advantages of a smaller skin flap division, making it easier to remove the enlarged retrosternal thyroid, and results in a fast postoperative recovery.

We have carried out more than 50 cases since we first began performing trans-oral thyroidectomy in March, 2013. The complex adjacent structures to the thyroid gland draw the most concern during these procedures. Delicate nerves controlling voice production and the abundant blood supply to the gland made it necessary to perform a precise dissection. The endoscopic system provides a magnified picture enabling surgeons to see more details than noticeable with the naked eyes. However, compared to the real world 3D vision, a two-dimensional (2D) view displayed by the traditional system has its own disadvantage of skewed depth perception. Therefore, it is difficult to distinguish the exact location of your targeted tissue. While a 3D endoscopic system can overcome the disadvantages of 2D system by providing depth perception allowing more precise excision of surgical maneuvers, it still has the disadvantages of a polarized view and a periodic impairment of fogged lenses (4). The polarized view itself is a major setback of the traditional 3D system as it can distort the brightness of the image a surgeon views by up to 50%, this decrease of light in turn casts a somewhat unclear image by way of distorted colors. Since 2015 we have employed this traditional 3D endoscopic system for this procedure. In our own experience we have found eye fatigue caused by optical attenuation and fog formation to be its main disadvantages even though it provided a good stereoscopic vision.

Our glasses-free 3D system developed by Dr. He Jian-Xing and his colleagues had been used successfully in thoracoscope surgery including radical resection of lung cancer since 2015 (5). The application of this system in trans-oral thyroidectomy demonstrated its advantages to surgeons by the collective experience of no noticeable optical attenuation of the image presented to surgeons and the avoidance of fog formation. Thus, eye fatigue decreased greatly. Since high definition capture and display systems were used, the concern of decreased image resolution was essentially dismissed. If 4k display technique was available, the quality of stereoscopic images can be more excellent than now. However, the increased image data requires a more powerful computer to process and calculate the image. The principle of the system we now use is based on a face tracing algorithm, but as all operation room personnel must wear a mask, the face tracing technique can not properly distinguish between the main operator and others. As a result, a headband was created to be worn by the main operator that sends out signals regarding his eyes position in order to correctly synthesize the image seen by the surgeon. The disadvantage of this system is that it follows the movements of only the main operator, therefore other assistants must wear the polarized glasses to watch another 3D screen to view the operation field.

The use of a glasses-free 3D system in trans-oral endoscopic thyroidectomy is safe and effective. The clear image casted to the surgeon can greatly facilitate precise surgical movement and reduce eye fatigue. Further comparative studies should be conducted to confirm our conclusions.

We are deeply grateful for the trust of our patients. We appreciated our colleagues for their efforts to help our patients to recover. We thank the research team of Dr. Jian-Xing He who assisted in the revision of our English manuscript.