Breast cancer is the most common cancer in women and the second most common cancer worldwide. In 2013 approximately 14,000 patients in the Netherlands were diagnosed with breast cancer, which is almost 30% of all cancer patients in the Netherlands (1). The cornerstone of breast cancer treatment is surgery in which mastectomy is still required, or the patients preferred option, in one third of all breast cancer patients (2,3). Breast reconstruction can be performed at the time of mastectomy, immediate breast reconstruction (IBR) using autologous tissue or implants (4). The cosmetic outcome of IBR is superior to mastectomy (5). Literature has proven good psychosocial outcome and quality of life in patients who underwent IBR (2,4,6,7). A study conducted by Al-Ghazal et al. showed that patients who underwent IBR showed less psychological distress than patients who underwent delayed breast reconstruction (8). Furthermore, studies have shown that IBR is oncologically safe as local recurrence incidence following IBR is comparable to that after mastectomy (5,9-14). This led to increasing IBR in the United States. In 2000, 12.9% of all mastectomies performed in the United States were combined IBR, increasing to 36.3% in 2009 (15). The United Kingdom Association of Breast Surgery recommends that any patient in which IBR is oncologically safe should have the possibility to choose for IBR (16). Dutch guidelines state IBR has a slight preference instead of delayed reconstruction and that every patient considered for mastectomy has to be informed about reconstructive options (17). However, despite the evidence and recommendations, almost two thirds of the mastectomies are still performed without IBR. We asked ourselves if there are elements in the pre-operative process that could facilitate or impede the choice for IBR. The major objective of this study was to investigate the decision-making process on whether or not a patient undergoes immediate reconstruction after mastectomy. In this study we focused on the role of patient as well as the role of the breast surgeon.

We investigated all electronic patient files of women diagnosed with DCIS or invasive carcinoma between 2010 and 2013, and underwent a mastectomy at the Canisius Wilhelmina Breast Center in Nijmegen, the Netherlands. Patients who underwent prophylactic mastectomy were excluded. IBR is defined as mastectomy and reconstruction performed on the same day. Surgeons who saw the patients were dedicated breast surgeons and plastic surgeons.

The following patient variables were scrutinized: age, diabetes, family breast cancer history, smoking habits, body mass index (BMI). We considered a BMI as normal as it was <25 kg/m2. Overweight was defined as a BMI between 25 and 30 kg/m2, and obesity was defined as a BMI equal or more than 30 kg/m2.

Our primary outcome measure was whether or not a patient received information about the decision making process regarding immediate reconstruction during mastectomy. We searched for any documentation in the electronic patient file of patients who did not undergo IBR about the reason for refraining from this procedure. Medical issues detected by the doctors were noted as well as personal restraints from patients. Patients were contacted by telephone when written documentation about IBR was poor or equivocal.

All data management and analysis were performed using SPSS 20.0 (SPSS Inc., Chicago, IL, USA). Categorical variables were presented in numbers and percentages. The chi-square test was used to compare percentages between two groups (IBR and no IBR). Continuous variables, such as age and BMI, were presented as means. Groups were compared by performing the independent-samples t-test. In order to evaluate independent predictors for IBR, variables with a P value below 0.05 were further tested with a logistic regression. A P value <0.05 was considered as significant. 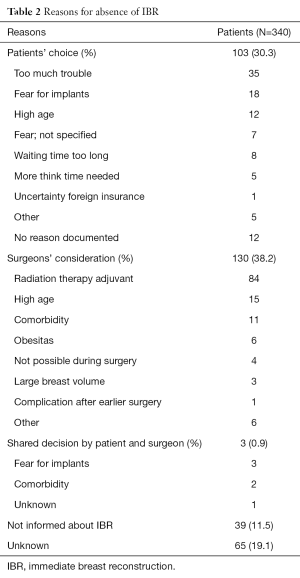 Exploring reasons for not performing IBR, we found poor documentation regarding considerations whether or not to perform IBR in 50% of the mastectomy cases. After calling these patients, we found that almost 10% of all patients were not informed about IBR. In the cases where therapeutic considerations were documented, 38.2% of patients who did not undergo IBR, breast surgeons decided not to offer IBR to the patient. The most common reason for declining IBR was the anticipated need for postoperative radiation therapy. However, almost 30% of these patients eventually did not receive radiation therapy after mastectomy. Multiple studies and reviews showed that post-mastectomy radiation therapy is associated with a higher incidence of complications and implant loss (18-22). Furthermore, literature states that radiation therapy has a negative impact on cosmetic outcome, due to often severe capsular contracture after implant-based reconstruction (21-25). As a result, reconstructed patients with radiation therapy had significantly lower satisfaction with outcome (21,26), psychosocial well-being, sexual well-being and physical well-being (26). On individual basis, however, breast surgeon, plastic surgeon and patient can through a process of proper informed shared decision making, opt for IBR, although the indication for postoperative radiation therapy is present.

In this study we found that IBR tends to be proposed less often to patients with advancing age and higher BMI. These factors, as well as type II diabetes and radiation therapy, are used by the surgical team to assess whether the patient is deemed fit for reconstruction. However, studies show IBR is a safe option in the elderly and age per se should not be a contraindication (27,28). Veronesi et al. showed that IBR is feasible and safe in elderly patients if the overall status of the patient is taken into consideration and pre-existing medical conditions are optimized (18). IBR was also less frequently offered to overweight and obese patients, which is in accordance with other studies. Being overweight or obese is associated with higher complication rate after IBR (23,29-34). Diabetes mellitus and smoking habits were not found to influence the decision to propose IBR. However, diabetes mellitus has shown to be a risk factor for surgical site infections (35) and skin necrosis (33,34) after breast surgery and is associated with poorer outcome after IBR (36). Studies show that smoking habits are associated with higher incidence of skin necrosis (33,34) and surgical site infections (37).

From the reasons why patients themselves, or their family, decline IBR, fear for complications or the difficulty to oversee the impact are often heard. In these cases, proper information will have been discussed, nevertheless, reassurance should be given. Especially since patients underestimate their quality of life and overestimate complication rates after IBR (38,39). These issues should be discussed with patients during the preoperative decision making process. On the other hand it is important to realize not every woman wants nor needs a reconstruction, whether immediate or delayed. We should refrain from talking patients into an unwanted reconstruction and value a proper shared decision making process. As a consequence, it is important to gain insight in what percentage of patients, wanting a reconstruction, really appreciate IBR, to be able to benchmark the IBR rate.

In contrast to mastectomy, IBR has been shown to provide better cosmetic outcome and superior quality of life, without compromising oncological safety (2-7,9-13,40-44). Although literature states that women benefit from IBR, in the past 3 years, 16% (range, 0–63%) of the patients with invasive breast cancer and 41% (range, 0–83%) of the patients with ductal carcinoma in situ underwent IBR in the Netherlands (1). We found a decreasing IBR trend over time in the 22.2% of breast cancer patients who underwent IBR. In the context of the multidisciplinary board, less patients were considered for reconstruction. Increasing indications for post mastectomy radiation treatment, lead to a more cautious policy of advising IBR. Moreover, plastic surgeons and patients alike increasingly prefer the superior cosmetic results of autologous reconstructions with DIEP. The downside of which is the long operation time, which can be difficult to reconcile with the expedited planning in case of malignancy.

Since this study was performed retrospectively, the lack of documentation in the records leaves us with often scarce explanation concerning the decision for or against IBR. We therefore had to contact patients by telephone to document reasons for refraining from IBR. In 65 patients no information was available whether or not IBR was discussed. Thirty nine patients were not properly informed about the (im)possibilities, 20% of these patients reported to regret this. It cannot be ruled out that closer attention to documenting whether IBR has been considered in the first place, could raise the rate of IBR offered to patients. Breast surgeons thus are more consciously involved in producing a well-founded shared decision vis-à-vis the patient confronted with the mastectomy. Potential risk factors for complications in IBR can be balanced against (ir)realistic expectations and fears of the patient.

Strengths of this study are the reflection of a real life situation, over a fairly large, non-selected population from a teaching breast center. Reviewing the files revealed the lack of documentation as a potential reason for the low reconstruction rate, which could not have been possible in a prospective fashion.

In conclusion, factors that appear to influence the breast surgeons’ decision to refrain from IBR are anticipated radiotherapy, high age and BMI. In half of breast cancer patients who did not undergo IBR, documentation about considerations regarding IBR was missing, suggesting a high proportion of patients might not be properly informed. Patients declined IBR mainly because of fear for implants and operation related trouble. In almost 10% of all patients IBR was not discussed. In all patients in whom a mastectomy is planned, IBR should be discussed and documented.