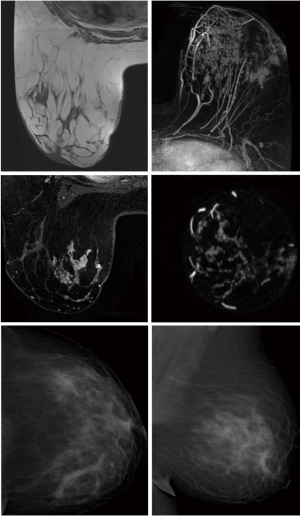 Figure 2 Features of NMLE T1WI image only displays part of enlarged and distorted glands and no space-occupying effect of the fat is observed. The contrast-enhanced image shows lesion with segmental distribution and clumpedenhancement. MG shows local asymmetry behind nipple, within which there are clustered minute calcifications. Comment: the NMLE is featured by the absence of space-occupying effect. The lesion contains fat and gland components on T1WI images. Under most conditions, a lesion can not be identified in an unenhanced image. Most NMLE on mammography present as focal a focal asymmetric or calcification, without any feature of mass. When interpreting NMLE, physicians should firstly rule out highly specific features such as ductal/segmental distribution, and then classify the finding as focal area, regional, reticular, or linear. C710684 clumpedenhancement with segmental distribution 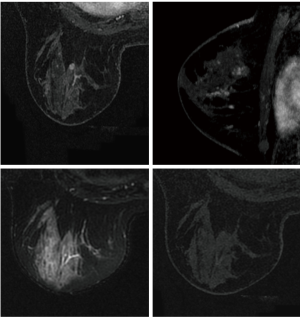 Figure 4 Ductal Contrast-enhanced scan shows enhancements along the ducts; the Dilated ducts can be seen at the corresponding area under the unenhanced scan, while no high T1WI signal is detected during pre-scanning. It is classified as BI-RADS category 4. Since no lesion was located during ultrasound and mammography, follow-up is recommended. C842556; No subtraction 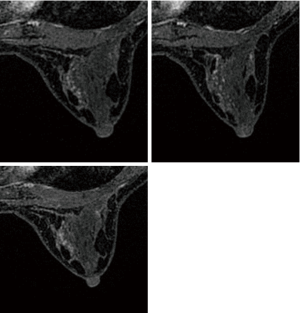 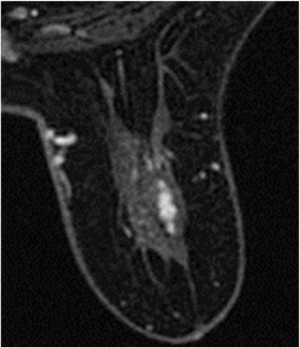 Figure 6 Ductal enhancement clumpedenhancements behind the nipple are distributed along the ducts and merge with each other. Pathology: Ductal Carcinoma In Situ (DCIS). D352873; (Other images can be utilized; lobular) 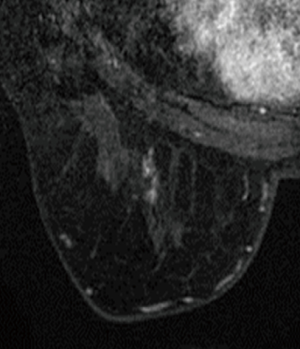 Figure 7 Focal area Heterogeneous enhancement in a confined area, less than 25% of quadrant. Fat and glands are found within the enhanced areas. Pathology: papilloma without space-occupying effect. B254713 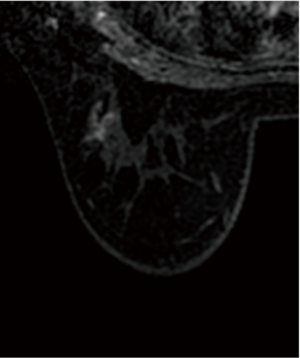 Figure 8 Focal area Heterogeneous enhancement in a confined area, less than 25% of quadrant. Without space-occupying effect. Pathology: fibroadenosis and the formation of fibroadenoma. B427152 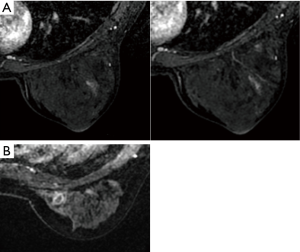 Figure 9 Focal area. Heterogeneous NMLE, less than 25% of quadrant. Pathology: Remarkable local ductal epithelial hyperplasia, along with a large number of inflammatory cell infiltration and foam cell aggregation in the surrounding tissues. It is considered to be inflammatory disease, but still requires further consideration. A. C128808; B. B710872 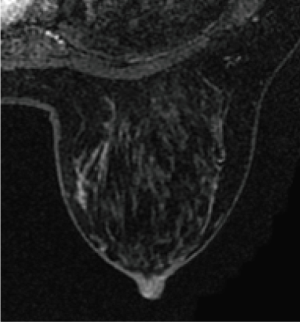 Figure 10 Oblique linear enhancement that is non-consistent with the ductal distribution is found in the medial quadrant of the right breast. It is not vascular structure. A250067 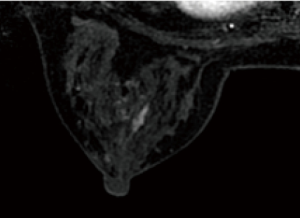 Figure 11 Ductal enhancement A linear enhancement which follows one or more ducts and radiates towards the nipple. Pathology: breast adenosis, but still requires further investigation. C211719 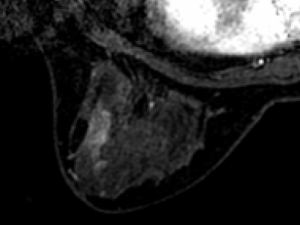 Figure 12 Regional enhancement The lesion has non-specific shape, without space-occupying effect, and is not conforming to a lobular pattern. Pathology: tubular structures infiltrating fibrous tissue, although cellular atypia was not obvious. It is considered to be tubular adenoma. C033540 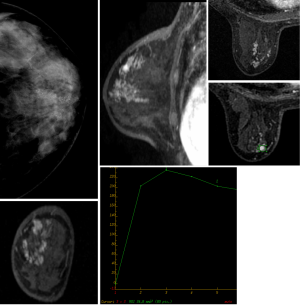 Figure 14 Segmental Triangular region of enhancement. Apex pointingto nipple, suggesting a duct or its branches from at least two views (usually on axial and sagittal views), suggesting high specificity of malignancy. However, plasma cell mastitis that involves one or more segments can also present segmental distribution, which makes the differential diagnosis even more difficult. Pathology: intraductal carcinoma. B774461 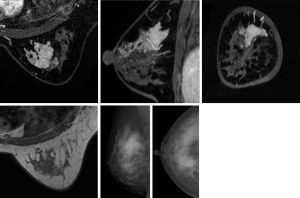 Figure 15 Segmental distribution Although it shows regional distribution on axial view, Triangular region of enhancement with apex pointing to nipple is found on the reconstructed sagittal and coronal views, suggesting typical segmental distribution. This lesion shows space-occupying effect with fat suppression on T1WI. If it is classified as a “mass”, it is an irregular mass with heterogeneous enhancement, and is therefore non-specific. MG shows irregular features of a mass wthin the upper inner quadrant (UIQ) of breast. Pathology: Diagnosis was invasive ductal carcinoma with an extensive intraductal component. C686031

Figure 16 Regional enhancement The scope of the lesion is larger than 1/4 quadrant, which requires multiple views (axial, sagittal and coronal views) and multi-sectional observations. The abnormally enhancing lesion in the right breast is larger than one quadrant and not conforming to a segmental distribution. The distributions of fat and glands signals in the corresponding area are detected on T1WI. Space-occupying effect (glands and fat suppression) can not be distinguished. The right image shows massive, irregular and heterogeneous enhancements in the same patient. Pathology: Invasive intraductal carcinoma with DCIS. 802637 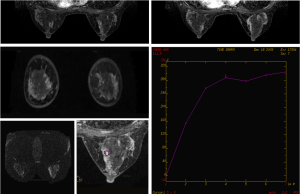 Figure 17 Multiple regions Multiple patchy areas of NMLE in both breasts, and MG shows no calcification. It is interpreted as BI-RADS MRI catergory 3. Follow-up is recommended. No segmental distribution is found on coronal view. 860052 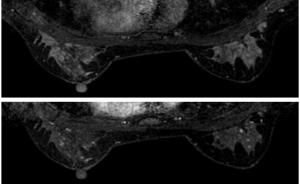 Figure 19 Multiple stippled lesions. Stippled enhancements are detected during the arterial phase, with non-specific morphological features. Ten minutes after injection of the contrast agent, these enhancements were “lost” into the enhancing surrounding breast parenchyma. BI-RADS-MRI category 3 is considered. F6-30

Figure 20 Multiple stippled lesions are clear during the arterial phase, show centrifugal enhancement during the delayed phase, and then merge. C322572 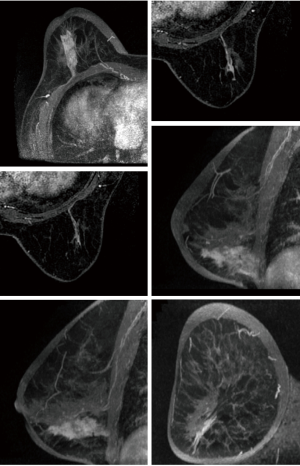 Figure 23 Stripe-like enhancement of breast. Assisted observation on different views is required. B563800

Focal area A ‘focal’ area of a NMLE would typically be defined as a single, small and confined abnormal enhancing area occupying less than 25% of a given breast quadrant. An area of ‘focal’ NMLE will quite often have fat or normal glandular tissue interspersed between the abnormally enhancing components.

Ductal A linear or linear branching which follows one or more ducts. Usually these patterns will radiate towards the nipple. It can be smooth or irregular, usually suggestive of breast cancer.

Segmental A non-mass-like contrast enhanced MRI breast lesion is described as ‘segmental’ when it appears in a cone or triangle shape, with an apex at the nipple. A segmentally enhanced non-mass-like lesion will usually represent the substantial involvement of a single branching duct system. It may be shown as ductal enhancement on thin-slice high-resolution scan.

Regional When a contrast enhanced MRI of a breast lesion is described as ‘regional’, this implies the involvement of a broader area, and typically not conforming to a ductal or segmental distribution. Usually, regional enhancement is patchy or ‘geographic’ (almost like a map) in appearance, and will lack convex borders.

Multiple regions Contrast enhanced breast MRIs are described as ‘multiple’ if there are at least two or more large volumes of tissues and are separated by either normal breast tissues or fat. Generally speaking, both diffuse and multiple regions of MRI contrast enhancement will tend to represent benign proliferative changes such as mammary gland hyperplasia. However, it is not uncommon for multicentric breast carcinoma to also show a multiple distribution.

Diffuse An enhancement pattern may be described as ‘diffuse’ if there are widely scattered yet more-or-less evenly distributed enhancements appearing through the breast fibroglandular tissue.

The internal enhancement of NMLE can be divided into homogeneous, heterogeneous, stippled, clumped, and reticular/dendritic (Figures 24-32).

Figure 26 Diffusely distributed stippled enhancement Scattered mild stippled enhancements are symmetrically distributed in both breasts during the early arterial phase (A). During the delayed phase (B and C), the lesions have increasingly remarked enhancement and show a trend of expansion/merging. This condition is often seen during the secretory phase of the menstrual cycle, mammary gland hyperplasia, or adenosis BI-RADS-MRI category 3 is considered. Re-examination or follow-up is required. Pathology: adenoid hyperplasia. B434270 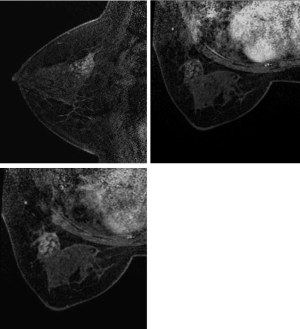 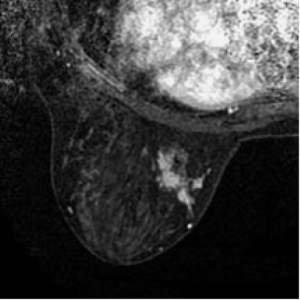 Figure 29 Clumpedenhancement. The lesion shows stippled enhancement with a regional distribution. The margin is poorly defined, and the enhancement is heterogeneous, with enhanced fatty components within the lesion. Pathology: Intraductal carcinoma. 101835 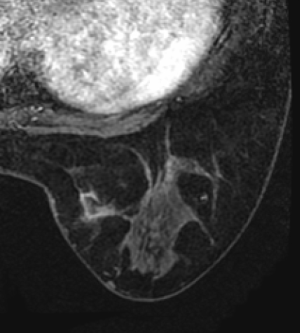 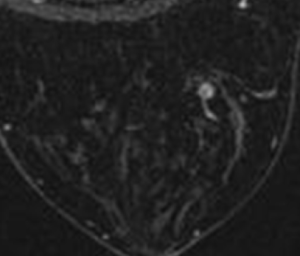 Stippled enhancement refers to multiple, punctuate, similar appearing enhancing foci, sand-like or dot-like. They are scattered in the mammary gland, not just confined to the ductal system. It is usually characteristic for normal parenchima or fibrocystic changes.

Clumped enhancement refers to cobblestone-like enhancement, with occasional confluent areas. In some parts it can show the grape-like clusters or has beaded appearance, which is often suggestive of DCIS.

NMLE needs to be differentiated from multiple masses; furthermore, the different descriptions for NMLE itself are also confusing. NMLE in many cases can not be easily differentiated from mass, especially multiple masses. According to our experiences, the space-occupying effect can be used as a key indicator in the differential diagnosis: NMLE on T1WI shows no obvious fat or fiber glands suppression; the lesion is confined within certain space, although it may contain adipose tissue or normal glandular tissue. 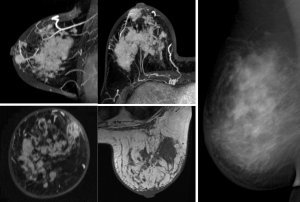 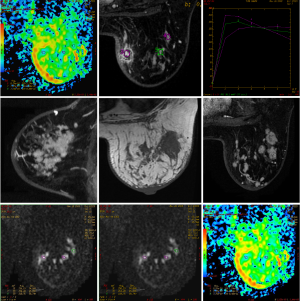 Figure 34 Differentiation between multiple masses and clumped enhancement Although fat compartments exist among multiple masses, no fat compartment is present within each mass; meanwhile, each lesion has a clearly-defined border with fat, showing specific space-occupying effect. Pathology: invasive ductal carcinoma. B402978