Indication and contra-indication for SLNB

The inclusion criteria for SLNB depends on the factors specific to the patient and to the tumor. In the patient with prior diagnostic or excisional breast biopsy, the proper technique for the injection in this condition is subdermal injection because the sentinel lymph node detection rate is the best (2).

In the first study of multicentric lesion in the breast it was found that the false negative rate was high and this condition was a relative contraindication to do the SLNB (3). In the theory of Mammary Lymphatics it was found that the development of nipple breast bud is radial extensions and the pathway of the lymphatic drainage of the breast tissue mostly starts from the subareolar plexus of Sappey to the axillary lymph nodes. The study shows we can use subareolar or intradermal injection technique in multicentric tumors and can detect the sentinel lymph node without false negative rate (1). Multicentric tumors are not limited to SLNB due to this data. For the multifocal cancer if the tumor diameter is less than 5 cm, it is not a contraindication to SLNB (4).

When the patients present with T3, T4 tumor (non-inflammatory carcinoma, T4d), Bedrosian et al. and Chung et al. performed the SLNB in locally advanced breast cancer (LABC) and showed SLN identification rate of , 99% and 100%, respectively. These two studies showed the false negative rate of 3%. However, the data in these patients are insufficient to recommend the role of SLNB (1).

DCIS without mastectomy is considered in 2 conditions. The first one is DCIS with mass. The DCIS presenting with mass was found to have an incidence of occult invasive disease of 21% (5). The other one is high grade DCIS or DCIS with microinvasion. The incidence of spreading to the axillary lymph nodes is represented in 1-4% (6). In the clinically N1 disease, fine needle aspiration cytology (FNA) is suggested in conjunction with ultrasound guide biopsy of the suspicious lymph nodes. If the cytology is negative, SLNB can be done in this condition (7). If the cytology result is positive for malignancy, surgery on the breast can be performed and the ALND performed without SLNB.

Focusing on prior non-oncologic breast surgery (reduction or augmentation mammoplasty, breast reconstruction), the role of SLNB in this group, it was found false negative rate is high but the data reported that it can be done if the pathway of lymphatic drainage of the breast tissue from the lateral side was preserved. However, the data in these patients are insufficient to recommend SLNB.

In this subset of the patients given neoadjuvant chemotherapy, there are three types of patterns of response after giving neoadjuvant chemotherapy. The first one is pathologic complete response which is well-known so there’s no need to explain it. The second pattern of response is concentric shrinkage in which the tumor has shrunk to small volume and there is no residual nodules in the peripheral area. The third pattern of response is mosaic pattern (multifocal residual) in which the tumor has shrunk to small volume after giving the chemotherapy like the concentric pattern. However, there are still many small nodules in the edge of the tumor. The tumor necrosis and tumor atrophy after giving neoadjuvant chemotherapy may cause obstruction to the pathway of the lymphatic drainage or it can change lymphatic pathway to cause false negative SLNB as has been found in several studies. The studies showed the false negative rate of 0-40% in doing SLNB after neoadjuvant chemotherapy and the NSABP B-27 showed the SLN identification rate of 85% and false negative rate of 11%. So the SLNB in these patients, there are insufficient data to support recommendations for action.

The following can be considered as absolute contraindications of the SLNB:
Inflammatory breast cancer (T4d)
Clinically N2 disease
Pregnancy
Prior axillary surgery

The contraindication of the SLNB is inflammatory breast cancer because there are the tumors emboli that cause the subdermal lymphatics obstruction. The SLNB in this condition showed a high false negative rate or could not detect the SLN.

In the clinically N2 disease, the tumor cells can block lymphatic sinuses and change the direction of the lymphatic pathway. The SLNB can still be used, but the surgeon should be aware of the false negative SLNB because non-sentinel node was detected instead.

Using isosulfan blue is contraindicated in patients who are pregnant, because there are no data on the safety of isosulfan blue in these patients. For the radioisotope injection data, the studies have been done and found that the fetus radiation exposure is minimal because it is distributed to Reticulo-endothelial (RE) System of the body quickly (8). However, the safety of the SLNB in pregnant and lactating patients has yet to be established. The recommendation from the international expert panel meeting in 2006 is that the use of radioisotope in these patients will need to provide careful counseling about the dose of radiation exposure that these patients will receive. All safety and efficacy of this technique must be revealed to the patient prior to doing the procedure (9).

The SLNB procedure is ideally performed prior to surgical treatment of the breast before disruption of lymphatics channel. The SLNB usually will be performed under general anesthesia. After the SLN is identified and removed it is sent to pathology. The intraoperative frozen section analysis has been used for pathologic analysis of the SLN. This analysis method may take about 15-45 minutes depending on the availability in each hospital. As we know, the intraoperative frozen section analysis is not available method in most hospitals. This is institutional limitation about the use of frozen section and do the SLNB.

In the hospital with limitation for the intraoperative frozen section analysis. The surgeon can perform the SLNB under local anesthesia at the minor operating room after giving tissue diagnosis from the patient and send the SLN to pathologist for pathological analysis that involves with H&E staining on permanent section. This process may take 5-7 days and the surgeon can do the operation at the breast and the axillar after receiving the pathological result of the SLN in the following.

Using this technique in the patients who plan to give neoadjuvant chemotherapy, without general anesthesia the second time, the surgeons can know the nodal status and plan of regimen chemotherapy prior to definitive breast surgery and the SLN detection rate is not effected by chemotherapy as mentioned above (10,11).

The surgeon must be able to perform sentinel lymph node surgery with general anesthesia as well before doing this procedure.

The SLNB can be performed under local anesthesia by using 1 cc of 1% isosulfan blue plus 1-2 cc of 1% xylocaine without adrenaline that are injected intradermally in the subareolar area of the breast parenchyma (12). After massaging the breast about 5 minutes to enhance lymphatic drainage. Two to 5 ccs of 1% xylocaine without adrenaline are injected into the site of incision and massage gently until the anesthetic spread (Figure 1A). A transverse incision is designed at the lower hair line in the axilla. Dissection proceeds through the subcutaneous fat down the axillary fascia. When the dissection approaches to the axillary fascia, two to 5 ccs of xylocaine infiltration is recommended to avoid pain in this area. After dissecting into the axillary fat, sharp dissection with scissors and gentle traction is important because using electrical dissection plus a surgical retractor with a large force can make cause a pain due to the intercostobrachial nerve stimulation (Figure 1B). If bleeding occurs, surgical clip or suture ligation is preferred and we don’t recommend electrocautery for stopping the bleeding because it increases the pain from stimulating the nerve (Figure 1D). When the SLNs are seen, one to 3 ccs of 1% xylocaine are injected around the nodes for the reason as mentioned above before removing the SLNs and the nodes are sent to pathology (Figure 1C). 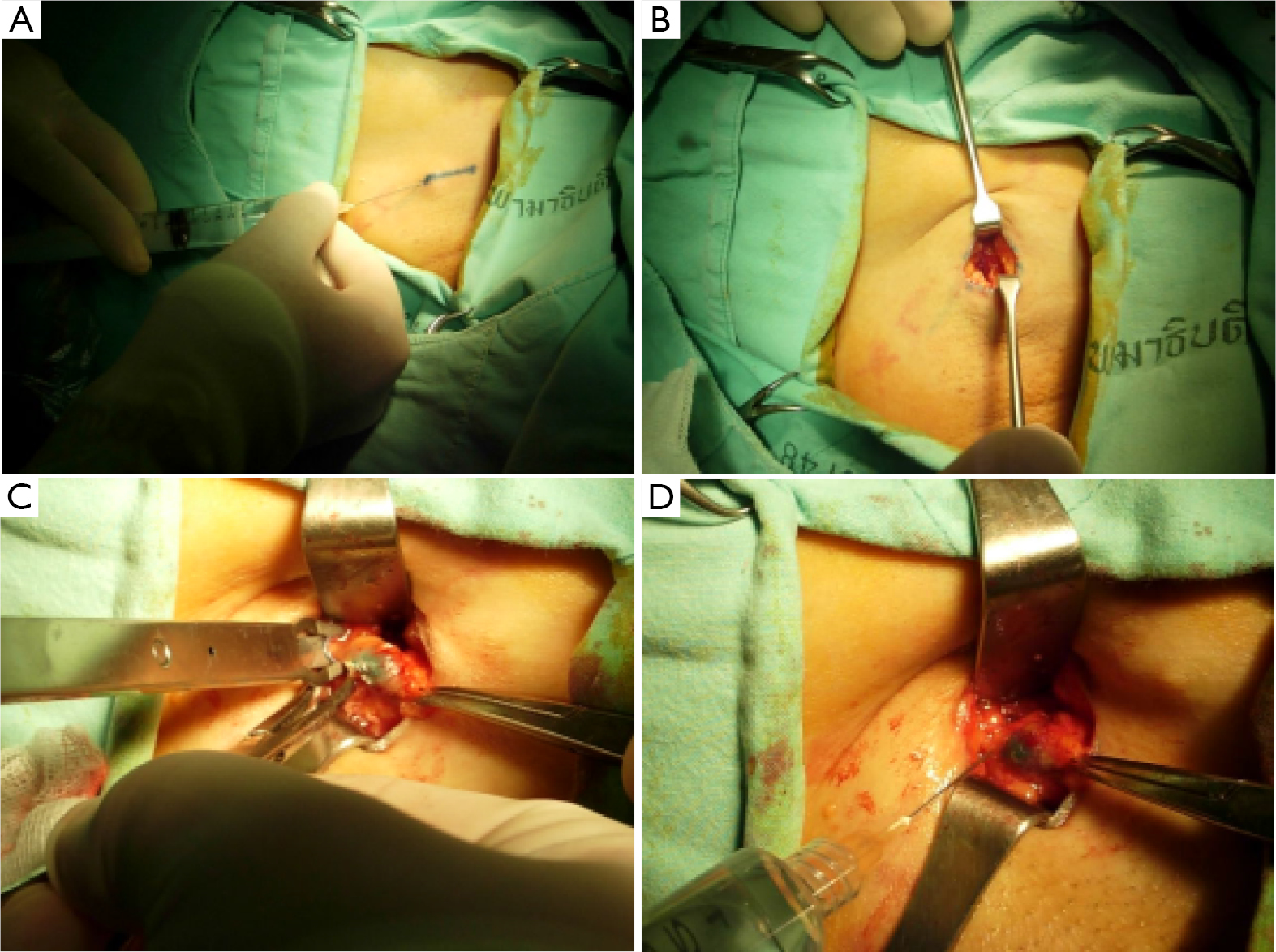 Figure 1 Techniques of SLNB with local anesthesia. A. Xylocaine is injected into the site of incision; B. Sharp dissection with scissors and gentle traction is important; C. Two to 5 ccs of xylocaine infiltration around the SLN is recommended to avoid pain; D. During the surgery, the suture ligation with silk 3-0 or hemoclip is used if there is bleeding

When the SLNB under local anesthesia is performed in the minor operating room, continuous monitoring should be done because 0.5% to 2% of allergic reaction can occur within a few minutes to an hour after the injection of color. There are reactions due to the blue injection, ranging from the urticaria to anaphylactic shock resulting in death. If the patient develops the anaphylactic shock due to the hemodynamic instability, give aggressive resuscitation to the patient in intensive care unit until stable condition. The monitor should be done continuously for another 24 hours due to the continuous absorption of blue dye from the skin and tissue underneath and it can cause late allergic reaction later (delayed secondary or biphasic reactions) (13).

The SLNB performed under local anesthesia is feasible and oncologically safe procedure. This method can be done in institution with limitations about the use of frozen section. It saves the operative time in the institutions that have available frozen section technique. The surgeon must be well trained in performing the sentinel lymph node surgery with general anesthesia as well before doing this procedure. However, when the SLNB under local anesthesia performed in the minor operating room, continuous monitoring should be done due to allergic reaction and go on monitoring for another 24 hours due to biphasic reactions.