Silicone breast implants have been an essential tool in the global plastic surgeon’s cosmetic and reconstructive arsenal since their invention by Cronin in the early 1960’s (1). During ensuing decades, the silicone gel filled devices have undergone much advancement in design and have been subject to significant international scrutiny and controversy regarding safety. Safety concerns ultimately resulted in a moratorium of silicone implants in the US from 1992 to 2000 (2). The FDA mandated each manufacturer to submit Pre Market Approval (PMA) study data documenting safety and efficacy data from a large scale prospective “Core” study of women implanted with the devices.

In November 2006, after presentation of long term efficacy and safety data demonstrating benefits, and risk rates of rupture, capsular contracture and re-operation, silicone implants from the two manufacturers at the time were officially FDA approved for augmentation and reconstruction. Currently, in the US, there are three manufactures of approved silicone breast implants: Allergan, Sientra and Mentor. This review will outline the current data regarding silicone breast implant rupture rates, mechanisms of rupture, diagnosis and management of rupture.

Silicone implants are classified into generations based on the progression and development of their outer shell and gel fill material. First generation implants were used in the 1960s and early 70’s. They had a thick shell and highly viscous silicone fill material resulting in very firm and durable implants. Dacron patches were placed on the back of the implant to decrease implant migration. Rupture rates were low; however, capsular contracture and calcification rates were high, nearing 100% in implants in place greater than 10 years (3,4).

As a result, second generation implants were designed with a much thinner shell and less viscous silicone in order to create a softer and more natural feel. As a result of these design changes, second generation thin-shelled implants were plagued with significantly increased rupture rates as high as 60% (5,6). In addition, the small particle size with minimal cross linking required for more fluidity resulted in significant diffusion of short chain silicone fragments through the shell, and into the periprosthetic capsule known as silicone “bleeding”. The high rupture rate and concerns of the deleterious effects of silicone gel in the pocket helped to provoke the re-classification of silicone implants and resulted in the cessation of their use pending results of Core studies. Figure 1 shows examples of the varying types of implant ruptures encountered including gel bleed, rupture of the implant shell and rupture contained by the periprosthetic capsule.

Third generation implants aimed to address the increased rupture rates and significant silicone bleeding associated with second generation implants. A more durable, multilayered shell with a middle barrier layer of Diphenyl Silicone between two layers of Diphenyl Silicone significantly reduced rupture and silicone bleed. In addition, the silicone fill contained larger particle size and increased cross linking to decrease diffusion. Third generation implants were used for FDA studies that ultimately lifted the moratorium on silicone implants in the US. Since then, fourth and fifth generation implants have been developed, including form stable and shaped implants, which are the devices currently in use. These implants have thicker shells combined with a more cohesive gel filler and are manufactured in both textured and smooth shell models (7).

Data regarding implant rupture rates are published in the Core studies each manufacturer performed and published as their basis for FDA approval. To date, there is not a standardized method of reporting verified rupture rates without implant retrieval, an option many patients reject. Reported rates vary significantly between manufacturers and method of patient evaluation. In the Allergan and Mentor Core studies, some patients were screened by magnetic resonance imaging (MRI) only, while others were only evaluated if they presented with physical symptoms that may indicate implant failure resulting in MRI evaluation for confirmation (8). Mentor MemoryGel implants demonstrate a cumulative overall rupture incidence at 6 years of: 1.1% for primary augmentation, 11.6% for revision augmentation, 3.8% for primary reconstruction and 5.9% for revision reconstruction (9). Longer term data has been cited but not currently published (10). Mentor shaped implants estimated rupture rate in the MRI cohort at 6 years was 2.1% for primary augmentation, 2.9% for revision-augmentation, 1.5% for primary reconstruction, and 0% for revision-reconstruction (11).

In addition to the FDA mandated studies, there is significant literature describing rupture rates in international populations. Collis and Shape investigated 149 patients who had third generation textured silicone breast implants placed for augmentation or reconstructive purposes. MRIs were performed and patients with a suspected implant were offered exploration. Their data suggest that implant ruptures begin at 6–7 years and by 13 years 11.8% of implants have ruptured (15). A Danish study designed to determine the incidence of implant ruptures evaluated women with intact silicone implants by MRIs at 3-year intervals. For modern implants, generation three or later, they estimated rupture-free survival of 98% at 5 years and 83% to 85% at 10 years. They concluded that modern implants are durable for 6–8 years. Rupture risk increases significantly after 6 years with 15% of modern implants expected to rupture between the third and tenth year after implantation (16).

Given the lack of standardized screening and reporting, as well as the multiple implant generations and manufacturers available, it is difficult to render comparable rupture rates across implant types and manufacturers. In light of published literature, care should be taken to directly compare rupture rates without carefully considering the diagnostic and statistical methods for evaluation or the time interval for reported rupture rate evaluation.

Most breast implant rupture patients do not manifest clinically significant signs or symptoms, and are classified as having “silent” ruptures (17,18). Evaluation for implant rupture is primarily driven by patient symptoms, including change in breast shape, size or firmness, capsular contracture, palpable lumps or breast pain. There are multiple diagnostic modalities that may be used to evaluate implant rupture including MRI, ultrasound, mammography, CT and finally physical exam. MRI is widely accepted as the imaging study of choice to definitively evaluate for implant integrity with a sensitivity and specificity of greater than 90% in evaluating rupture (19). Classical findings on MRI include the linguini sign (20) or the tear drop sign in more modern implants (21). The FDA currently recommends women with silicone breast implants undergo screening for implant rupture 3 years after implantation and then every 2 years thereafter (22). This guideline initiates a discussion between the patient and her physician regarding the risks of this occurrence. Limitations of MRI include expense, need for scanners with specific breast coil technology, time to complete study and patient limitations due to other medical implants. Figure 2 shows the typical appearance of silicone breast implant intra-capsular rupture. There is collapse of the implant shell and free silicone with the implant periprosthetic capsule. 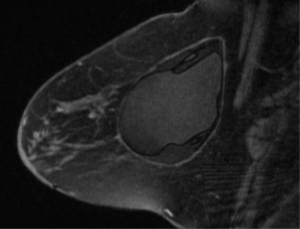 Figure 2 Magnetic resonance imaging (MRI) of second generation implant with intra-capsular rupture, there is free silicone liquid within the capsule.

Ultrasound has been popular as an alternative to MRI. The advantages include decreased cost and time, however, it is known to be a highly operator dependent diagnostic study. Ultrasound can detect both extracapsular ruptures described as the snowstorm sign (23) and intracapsular ruptures described as the stepladder sign (24). A decrease in the sensitivity and negative predictive value of ultrasound has been shown in the presence of capsular contracture (25). In a cost analysis comparison between ultrasound and MRI for screening for implant rupture, ultrasound was found to be significantly more cost effective in both symptomatic and asymptomatic women. In asymptomatic women, MRI is generally used to confirm a positive ultrasound screen (26).

Mammography is a relatively inexpensive and frequently performed imaging modality for women with and without breast implants. Extracapsular rupture with free silicone can easily be detected by mammography; however, this is only a small proportion of implant ruptures (21). Due to the dense nature of the silicone, mammography is unable to detect intracapsular ruptures. This limits the overall utility of mammogram in detecting rupture (19). Findings on mammography include lobular or spherical densities remote from the implant and an irregular shape to the implant shell.

Physical exam is the first step for a patient who presents for evaluation of rupture. Findings on exam include breast asymmetry, palpable nodules or lymph nodes, capsular contracture or palpable implant shell. In a study comparing physical exam for implant rupture to MRI the sensitivity of the clinical examination for diagnosing rupture was 30% and the specificity 88%. The positive predictive value of a clinical diagnosis of rupture was 75%, and the negative predictive value was 49%. In this study, the authors concluded that when physical examination is used to identify implant rupture, neither the sensitivity nor the specificity is acceptable (18).

A recent study of 102 post-mastectomy patients from the European Institute of Oncology concludes the MRI should be the modality of choice to diagnose rupture in asymptomatic women due to the superior accuracy compared to ultrasound. However, the authors recommend routine screening with ultrasound and confirmation with MRI (27).

Brandon et al. published multiple studies on the mechanism of implant rupture. In a 2006 publication, they postulate failure at the site of implants folds as an etiology of implant rupture and describe different patterns of fold failure based on microscopy (29). Implant folding is felt to be more common in the presence of capsular contracture of long duration. Implant rupture is likely a multi-factorial process and it is yet to be seen how the advances in gel cohesiveness and improvements in shell design in the 4th and 5th generation implants will affect the rates and mechanisms of rupture.

Studies from a Danish comprehensive national database evaluated women with a variety of manufacturer and implant models with MRI over a 2-year period. They found about three-fourths of implant ruptures to be intra-capsular and the remaining one-fourth to be extra-capsular. Of the patients with implant rupture, only 10% of the implants with intra-capsular rupture progressed to extracapsular rupture. In patients with extracapsular rupture 84% remained stable during the same time period. Further analysis showed no evidence of increased levels of autoantibodies when comparing patient with intact or ruptured implants (16). Such demographic studies showing no discernible health burden associated with ruptured or intact implants were important in obtaining FDA approval for the devices.

Patients with silent rupture, reported incidentally, should be offered the options of surgery or observation. Many choose to observe with interval studies. Patients presenting with additional clinical problems that may be solved by surgery are more motivated. The current recommended surgical management of diagnosed or symptomatic ruptured silicone breast implants is removal, generally including a complete capsulectomy. When the rupture is intra-capsular, i.e., free silicone is contained with the surrounding fibrous capsule; explantation involves removal of the implant and any free silicone, capsulectomy and replacement of the implant if the patient wishes. Extra-capsular rupture, with free silicone in the breast tissue, is managed similarly with the added resection of any visible or palpable granulomas present in the breast parenchyma (5).

Rupture of silicone breast implants is known complication associated with both cosmetic augmentation and breast reconstruction. The rate of rupture increases over the life of the implant. Given the significant differences in methodologies and variations in patient evaluation, as well as variable length of implantation duration reported in rupture data, it is difficult to directly compare rupture rates across manufacturers and implant types. Implant damage by surgical instrumentation is likely the leading cause of rupture. The majority of silicone implant ruptures are clinically undetectable and pose no significant health risks. Symptomatic patients with ruptured implants should be offered the choice of observation, or explantation and capsulectomy with or without replacement.

Conflicts of Interest: Dr. Cunningham has served as a consultant for the Mentor Corporation, Acelity, and his university has received research grants in the past from Mentor and Allergan, and Sientra. And other authors have no conflicts of interest to declare.