References up to August 2022 were collected from PubMed, Google Scholar, EMBSE and Web of Science. The keywords were (“foreign bodies” OR “foreign-body migration) AND (“thyroid gland” OR “neck” OR “neck injuries”). In addition, reference lists of the retrieved articles were reviewed to identify other eligible studies. After removing duplicates, 479 relevant articles were identified. After screening titles and abstracts and excluding duplicate references, 127 articles were identified. We found that some of those studies were relevant to other foreign bodies instead of fishbones. Then, a full-text review was conducted to exclude those that did not meet inclusion criteria, and 23 studies containing 27 patients were identified. The risk of bias (Figure S1A,S1B) for these references was estimated by using RevMan software (Version 5.3, Cochrane Library). For further comprehension of this thyroid injury, we summarized the clinical features, diagnostic and treatment strategies in the present study (Table 1) (8,9,11-31). We present the following article in accordance with the CARE reporting checklist (available at https://gs.amegroups.com/article/view/10.21037/gs-22-402/rc).

A 52-year-old woman was referred to our hospital due to severe and persistent left anterior cervical pain for eight days. Eight days prior, the patient felt a tingling sensation when eating fish. Believing that a fishbone was stuck in her throat, she swallowed several vegetables to push the fishbone into the stomach. Immediately, the patient felt severe and persistent left anterior cervical pain. There was little relief two hours later, and she was taken to the nearest hospital. Electronic laryngoscopy was performed and showed a large cyst, approximately 2 cm in maximal length, attached to the lingual surface of the epiglottis without any foreign body or obvious wound in the throat. Then, the diagnosis of an “epiglottic cyst” was considered. The next day, an “epiglottic cyst resection” operation under laryngoscopy was performed. Nevertheless, her symptoms persisted, and eight days after symptom presentation, she was referred to our hospital. She occasionally had throat discomfort from left anterior cervical pain appearing 3 months earlier.

Cervical pain was aggravated during left neck palpation, and there were no other obvious abnormalities in the palpation of the neck and thyroid. Complete blood count thyroid function, and para-thyroid gland hormone (PTH) tests were unremarkable. Ultrasonography revealed a linear hyperechoic shadow from the upper inner side to the lower outer side of the left thyroid lobe, which was adjacent to the internal jugular vein, and no obvious rupture of the internal jugular vein was found (Figure 1). Computed tomography (CT) revealed that the left lobe of the thyroid had an oblique sloping high-density shadow from top to bottom, approximately 2.5 cm in length, with the tip reaching the outer edge of the thyroid gland and 2 mm from the left internal jugular vein (Figure 2). Based on the symptoms and CT and ultrasound examination, the patient was diagnosed with a foreign body in the thyroid. 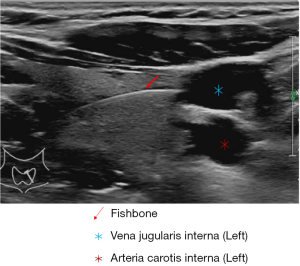 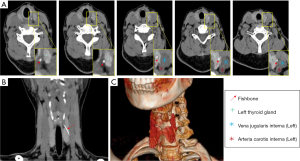 CT and ultrasound examination suggested that the foreign body was close to the left internal jugular vein; therefore, cervical immobilization was performed to prevent further damage. After full consideration and preparation, we conducted left neck exploration. During the exploration, there were no obvious bleeding points or abscesses. Therefore, we attempted to protect thyroid tissue from resection. After the thyroid gland and left internal jugular vein were clearly dissected, we used gauze to protect the internal jugular vein and separate the thyroid gland from the surrounding tissues. To avoid secondary injury of nerves and blood vessels, the naked thyroid was palpated to find the fishbone. Later, a protruding hard object on the outside of the thyroid was touched. The internal jugular vein was pulled outwards, and the fishbone was removed along its puncture direction (Figure 3). Then, the internal jugular vein and thyroid were carefully examined to ensure that there was no injury or infection. In addition, we used a nerve detector to test the functional status of the superior laryngeal nerve and the recurrent laryngeal nerve, and no abnormality was found. Oral gastroscopy was also performed during the operation. Under gastroscopy, a quasi-circular wound with a maximal length of approximately 1 cm on the epiglottic mucosa was found, which was considered to be a postoperative wound caused by epiglottic cyst resection (Figure 4A). Furthermore, no evident ulceration or injury was found in the esophageal mucosa (Figure 4B). 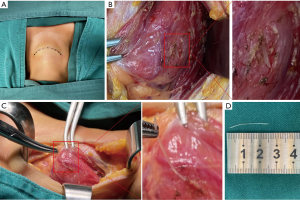 Figure 3 The process of removing the migrating fishbone. (A) Design of the surgical incision; (B) intraoperative finding of the fishbone; (C) the fishbone was taken out along its penetrating direction; (D) the removed fishbone was approximately 2.5 cm long. 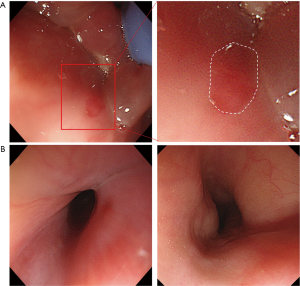 Figure 4 The results of the oral gastroscopy. (A) A quasi-circular wound with a maximal length of approximately 1 cm on the epiglottic mucosa; (B) diagrams of esophageal mucosa under oral gastroscopy examination.

To prevent postoperative infection, the operation cavity was flushed with hydrogen peroxide twice and normal saline several times. Drainage, fasting, and antibiotics were prescribed for 3 days after operation. The patient was not discharged until the left anterior cervical pain disappeared and there were no other abnormalities. Subsequent follow-ups for 40 days revealed no further cervical discomfort. All procedures performed in this study were in accordance with the ethical standards of the institutional and/or national research committee(s) and with the Helsinki Declaration (as revised in 2013). Written informed consent was obtained from the patient for publication of this case report and accompanying images. A copy of the written consent is available for review by the editorial office of this journal.

Persistent pain in the neck is the most common symptom in patients with a penetrating fishbone injury. However, for some patients, the pain appears to be significantly relieved after the fishbone has penetrated the esophageal wall and become fixed in the thyroid, and foreign body sensation and dysphagia are their main complaints. In previously reported cases, five patients (5/25) presented with fever secondary to thyroid abscesses. Notably, other conditions causing neck pain and discomfort need to be considered, including epiglottis cysts, tonsillitis and acute epiglottitis (32,33). To distinguish these diseases from foreign body invasion, clear histories of foreign body ingestion and physical examination especially palpating of the neck are require additional attention.

The diagnostic methods of foreign body invasion include X-ray, CT, ultrasonography, esophagoscopy, and laryngoscopy (17). Esophagoscopy or laryngoscopy examinations are usually regarded as the preferred methods when a foreign body is ingested because they can also be used as therapeutic tools. Unfortunately, almost all reported patients did not have foreign bodies in the esophagus detected by esophagoscopy or laryngoscopy. Reasonably, once the foreign body is completely detached from the esophagus, only wounds on the inner esophageal mucosa will be visible under the endoscope. Based on the statistics in Table 1, the diagnostic accuracy of X-rays, CT, and ultrasonography are 81.8% (18/22), 100% (24/24), and 100% (12/12) respectively. In the present study, the most important reason for the misdiagnosis was the epiglottic cyst found with the laryngoscope represented a distractor that was presumed to be the etiology of symptoms. Therefore, the history from the patient regarding fish bone ingestion did not match the diagnosis, and further workup should have been considered earlier. If a foreign body is fixed in the thyroid without any surrounding tissue damage, bleeding, or abscess, open surgery and simple removal of the foreign body could be recommended. According to the summarized data from Table 1, approximately half of the patients had abscess lesions. For these patients, in addition to simple removal of the foreign body, hemithyroidectomy and abscess excision were performed to prevent the progression of the infection. Of all the reported cases, 8 patients received thyroidectomy, including 1 case of partial thyroidectomy, 6 cases of thyroid lobectomy, and 1 case of total thyroidectomy. Most of the patients who underwent thyroidectomy had secondary thyroid abscesses. Not all patients with thyroid abscesses require partial lobectomy (16). These studies demonstrated that surgical methods should be taken into consideration based on the degree of infection and the position of the penetrating fishbone.

The presence of a migratory fishbone should be considered when a patient has a history of fishbone ingestion, but the result of laryngoscopy or esophagoscopy is negative. Clinical presentation and palpation of the neck are essential to establish an initial consideration, and further workup examinations including X-ray, CT, and ultrasonography, should be taken into consideration to differentiate thyroid penetration and epiglottic cysts.

Reporting Checklist: The authors have completed the CARE reporting checklist. Available at https://gs.amegroups.com/article/view/10.21037/gs-22-402/rc

Conflicts of Interest: All authors have completed the ICMJE uniform disclosure form (available at https://gs.amegroups.com/article/view/10.21037/gs-22-402/coif). The authors have no conflicts of interest to declare.

Ethical Statement: The authors are accountable for all aspects of the work in ensuring that questions related to the accuracy or integrity of any part of the work are appropriately investigated and resolved. All procedures performed in this study were in accordance with the ethical standards of the institutional research committee and with the Helsinki Declaration (as revised in 2013). Written informed consent was obtained from the patient for publication of this case report and accompanying images. A copy of the written consent is available for review by the editorial office of this journal.