Since Kocher devised and standardized open cervical incision thyroidectomy in the late 1800s, open thyroidectomy has been recognized as the standard of thyroidectomy (1). However, open thyroidectomy may result in untoward scars, i.e., hypertrophic scars or keloids. Recently, the incidence of thyroid nodules, especially in young women, has increased, and various attempts have been made to minimize the scar attributable to surgery (2).

Various remote access thyroid surgeries, such as transaxillary, breast, axillo-breast, retroauricular, and transoral approaches using endoscopes and robotic systems, have been reported since the introduction of the concept of minimally invasive thyroid surgery (3-5). Among them, robotic facelift (retroauricular) thyroidectomy was first introduced by Terris (6). The retroauricular approach, accessed through an occipital hairline incision and facelift incision, is an anatomically easy approach for head and neck surgeons familiar with parotidectomy (7,8). In addition, compared with the transaxillary approach, the area required for dissection is small and the distance from the incision to the thyroid gland is short (9).

We started performing robotic retroauricular thyroid surgery in 2018. As we gained experience, we discovered several techniques which enabled using all four robotic arms by adjusting the angle of the arm during the docking process, resulting in easier and more convenient surgical approach.

By using the Cumulative Sum (CUSUM) analysis method that can monitor minute changes in clinical data, we aimed to analyze the learning curve for robotic retroauricular thyroidectomy and share our experience (14). We present the following article in accordance with the STROBE reporting checklist (available at https://gs.amegroups.com/article/view/10.21037/gs-22-365/rc).

The medical records of 36 patients who underwent robotic retroauricular thyroidectomy between March 2018 and March 2021 were reviewed retrospectively. The clinical features, operation time, duration of hospital stay, and complications according to the period were analyzed. All the procedures, including retroauricular skin incision, robot docking, and robot console manipulation, were performed by a single surgeon (WJJ) using the da Vinci Xi Surgical System robot (Intuitive Surgical, Inc., Sunnyvale, CA, USA).

The study was conducted in accordance with the Declaration of Helsinki (as revised in 2013). This study was approved by the Institutional Review Board of the Seoul National University Bundang Hospital (No. B-2205-756-106). The requirement of informed consent from patients was waived owing to the retrospective nature of the study.

The CUSUM curves were constructed using Microsoft Excel 2010 (Microsoft, Redmond, USA). The slope of the CUSUM curve shows the trend of the learning outcomes, and the inflection point is considered a breakthrough in the learning curve (16). For categorical variables, the differences were analyzed using the Pearson chi-square test or Fisher’s exact test. The continuous variables were analyzed using Student’s t-test. IBM SPSS statistical software (version 19.0; IBM Corp., Armonk, NY, USA) was used for data analysis. All the continuous data are presented as mean ± standard deviation (SD). A P value <0.05 was considered statistically significant.

The mean age of the 36 patients who underwent robotic retroauricular thyroidectomy was 40.7±11.4 years (range, 17–61 years). The mean tumor size was 1.3±1.0 cm (range, 0.3–4.5 cm). The CUSUM curve of the operation time shows an ascending slope until the fifteenth case, after which the slope decreases (Figure 2). Therefore, the slope could be divided into two phases. Thus, the first to fifteenth cases were defined as phase I, and the 16th to 36th cases were defined as phase II; various surgical outcomes between the two phases were compared. 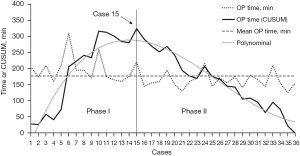 Upon comparing the differences in the clinical features between phases I and II, no significant difference in age, sex, postoperative pathology, and nodule size was observed (Table 1). The postoperative pathology of phase II was papillary thyroid cancer in 16 cases, follicular adenoma in three cases, Hürthle cell adenoma in one case, and nodular hyperplasia in one case. Table 2 shows the differences in the surgical outcomes between phases I and II. The total operation time of phase I was 199±41.0 minutes (range, 160–310 minutes) and the total operation time of phase II was 161.9±23.4 minutes (range, 125–215 minutes), which was significantly shorter than that of phase I (P=0.002). The flap elevation and docking time and console time were significantly shorter in phase II than that in phase 1 (P=0.037, P=0.020). The closure time, including hemostasis, drainage placement, and skin suturing after the robot was out, was also shorter in phase II than that in phase I; however, it was not statistically significant (Table 2).

Interphase comparison of the intraoperative parameters and surgical outcomes

There was no significant difference between the two phases in the total amount of drainage, duration of hospital stay, and neck paresthesia after the surgery. Although there was no significant difference, there was one case of hematoma in phase I and one case of temporary vocal cord paralysis in phase II. The parathyroid glands were found in the specimen in three cases each in phases I and II (Table 2).

However, few reports exist on the surgical outcomes of the retroauricular approach compared with that of the transaxillary and transaxillo-breast approaches. Most reports are on principled surgical methods. There have been few reports on the learning curves.

We noticed that as the number of cases performed increased, the operating time was shortened, and the operation became easier. We aimed to evaluate the learning curve for robotic retroauricular thyroidectomy using CUSUM analysis and share our experiences.

Currently, robotic surgery is recognized as the standard in visceral surgery in gynecology and urology (17). The advantages of robotics in head and neck surgery include the avoidance of scarring on the face and neck, and the possibility of performing precise surgery in a narrow anatomic region where major vessels and cranial nerves are complexly clustered. In the future, as robot technology develops and the number of cases increases, the use of robots in head and neck surgery will also increase.

A robotic surgical system in thyroidectomy is useful for the identification and preservation of the recurrent laryngeal nerve and parathyroid glands owing to the magnified surgical view and wristed instruments. In particular, if the surgeon becomes proficient in thyroid surgery using the retroauricular approach, a wide range of head and neck surgeries can be performed through the same approach. Therefore, it may be considered advantageous for novice surgeons who desire to begin performing robotic head and neck surgery to begin with the retroauricular approach.

CUSUM analysis is a method developed to monitor industrialization problems and has been previously used to monitor the changes in medical skills and clinical values in other clinical studies (14-16,18). Unlike the moving average line, the CUSUM method accumulates and quantifies the range of fluctuations based on a predetermined threshold value, such as an average, and represents it in the form of a graph (Figure 3). The CUSUM analysis can better reflect the degree of change because the range of variation is accumulated even for small changes between sequentially proceeding event values and a predetermined threshold value. 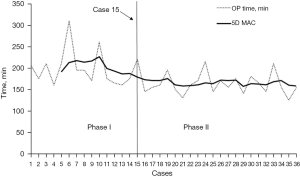 Studies have been conducted to analyze the learning curve for surgery using the CUSUM analysis, which has such advantages. Park et al. reported that surgeons became competent in performing this procedure after 12 cases of video-assisted mini-laparotomy partial nephrectomy using CUSUM analysis (19). In addition, Gezer et al. reported that surgeons became proficient in video-assisted thoracoscopic lobectomy after 27 cases (20). Using the CUSUM analysis, it is possible to detect subtle trend changes in the operative outcomes, which do not result in much difference; therefore, various variables between distinguished phases can be compared and information concerning the learning curve can be provided.

One rigid binocular stereoscopic endoscope and three robotic arms, a total of four robotic arms, can be used in the da Vinci robotic surgical system. However, unlike the transaxillary approach, docking four robotic arms is challenging using the retroauricular approach owing to the narrow working space. Even if four robot arms are docked via retroauricular incision, if the angle and distance are inappropriate, collisions between the robot arms continuously occur during the surgery, which interfere with the accurate manipulation of the instrument. In the beginning, when the surgeon is inexperienced, these problems are difficult to overcome, and surgery is performed using only three robotic arms. If all four robot arms can be used, traction-counter traction is possible during the surgical procedure, making the dissection much easier, shortening the operation time, and improving safety. A method was devised to insert all four arms through a retroauricular incision with minimal intraoperative collision of instruments. The specific method is described in detail in the materials and methods section (Figure 1). Devising a way to introduce four robotic arms at an appropriate angle and distance between the arms was an important change resulting in shortening of the operation time. This would be helpful for surgeons who are starting out with robotic retroauricular thyroid surgery.

The current study has several limitations. First, since this study was a retrospective observational study, the analysis was performed only on the available data. Second, the study included the analysis of data from a single institution and a single surgeon, and since the surgeon has 10 years of thyroid surgery experience and also has experience with a transaxillary approach, caution is warranted in the interpretation of the learning curve of this study. Third, long-term oncological outcomes were not analyzed in this study. Fourth, in addition to the clinical characteristics presented in this study, it is possible that different anatomical or oncological characteristics of each patient may have influenced the learning curve. Fifth, in this study, only the retroauricular approach was analyzed; therefore, a comparison with other approaches could not be made. Sixth, in this study, the learning curve is analyzed only based on the operation time; hence, it is necessary to analyze the learning curve comprehensively using other parameters in a follow-up study with an increased number of cases. Despite these limitations, few reports exist on the learning curve for robotic retroauricular thyroid surgery compared with that of other approaches. We were able to visualize the initial learning process for robotic retroauricular thyroid surgery using CUSUM analysis and share our experiences with unavoidable challenges through this study. Further studies involving multiple surgeons using multiple approaches are warranted to reach more precise conclusions.

Reporting Checklist: The authors have completed the STROBE reporting checklist. Available at https://gs.amegroups.com/article/view/10.21037/gs-22-365/rc

Conflicts of Interest: All the authors have completed the ICMJE uniform disclosure form (available at https://gs.amegroups.com/article/view/10.21037/gs-22-365/coif). The authors have no conflicts of interest to declare.

Ethical Statement: The authors are accountable for all aspects of the work in ensuring that questions related to the accuracy or integrity of any part of the work are appropriately investigated and resolved. The study was conducted in accordance with the Declaration of Helsinki (as revised in 2013). This study was approved by the Institutional Review Board of the Seoul National University Bundang Hospital (No. B-2205-756-106). The requirement of informed consent from patients was waived as this was a retrospective study.