The incidence of thyroid cancer has increased in recent years. In the cancer statistics report released by the American Cancer Society in 2022, thyroid cancer ranks seventh in the number of new cancer cases in women (1). Differentiated thyroid cancer (DTC) has a better prognosis among thyroid cancers, with a 10-year survival rate of 90%. However, 40–60% of DTC patients have lymph node metastases at the time of diagnosis (2). The current domestic and foreign guidelines recommend lateral neck dissection (LND) (3-5) for patients with suspicious lymph nodes found in the lateral neck. The 2015 ATA guidelines recommend that the dissection extent includes levels II, III, and IV (4). The recommended extent of LND in the guidelines published in China in 2022 includes levels II, III, IV, and VB (6), and the minimum acceptable extent covers levels IIA, III, and IV, but the sternocleidomastoid is not mentioned. Lymph node metastasis between the sternocleidomastoid and sternohyoid muscle (LNSS) was first reported by Sun et al. in 2013 (7). The anterior boundary of the LNSS is the sternocleidomastoid muscle, the posterior boundary is the sternohyoid muscle, the upper border is the intersection of the sternocleidomastoid muscle and the sternohyoid muscle, and the superior border is the intersection of the sternocleidomastoid muscle and the sternohyoid muscle. The inferior boundaries are the suprasternal fossa and clavicle, the external and internal borders of which are the lateral and internal borders of the sternohyoid muscle, respectively. The LNSS is considered to be part of the suprasternal space. Previous literature has reported that the detection rate of LNSS involvement was 63.5–68.3%, and the transfer rate was 14.4–31.81% (8-10). Currently, knowledge of the LNSS requires improvement, and there are few related reports and studies. A survey in Chengdu, China, found that only 53.64% of surgeons paid attention to this area (9). LNSS metastases are mostly ipsilateral to the tumor, and contralateral metastases are rare; this is why LNSS metastasis is easily ignored, especially in the contralateral neck. Level LNSS metastatic lymph nodes are usually not significantly uncomfortable preoperatively and are not easily detected by preoperative physical examination and ultrasound. Once abnormal enlarged lymph nodes in the level LNSS are found preoperatively, intraoperative dissection of this area is required. This case report presents two cases of papillary thyroid carcinoma (PTC) with contralateral LNSS lymph node metastasis. It is hoped that the report of these two rare cases will arouse attention to the level LNSS, especially the contralateral level LNSS. We present the following article in accordance with the CARE reporting checklist (available at https://gs.amegroups.com/article/view/10.21037/gs-22-715/rc).

A 63-year-old female patient was admitted to our hospital with a 15-day history of an untreated thyroid nodule. She had no family history of thyroid carcinoma. On physical examination, a mass measuring approximately 3.0 cm × 3.0 cm was palpable on the right side of the anterior midline of the neck. It had poorly defined borders and a hard consistency and moved up and down with swallowing. An ultrasound showed a hypoechoic area near the isthmus of the right lobe, measuring about 2.33 cm × 2.33 cm × 3.13 cm, with an unclear boundary, multiple strong echoes, and no significant blood flow signal (Figure 1A). A hypoechoic lymph node measuring approximately 0.94 cm × 0.55 cm was observed below the lower pole of the right lobe, which was round in shape and less clear in structure. A lymph node was observed in the left cervical LNSS region, measuring about 0.6 cm, with a full shape and unclear structure, and no significant blood flow signal was observed (Figure 1B). Following a fine-needle aspiration (FNA) biopsy of the nodules in the right lobe of the thyroid, the patient was diagnosed with PTC. 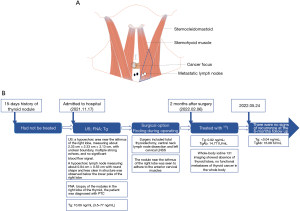 The patient had a preoperative thyroglobulin (Tg) level of 10.09 ng/mL (normal range: 3.5–77 ng/mL), which decreased to 0.92 ng/mL, and thyroglobulin antibodies (TgAb) level of 14.77 IU/mL 2 months after surgery. She was treated with radionuclide therapy and oral 100 mCi iodine. Whole-body iodine 131 imaging showed an absence of thyroid lobes and no functional metastases of thyroid cancer in the whole body, consistent with the postoperative imaging changes. The 18F luorine-fluorodeoxyglucose (18F-FDG) positron emission tomography/computed tomography (PET/CT) findings showed soft tissue swelling with slightly increased glucose metabolism in the surgical area and nonspecific inflammatory lymph nodes in the bilateral neck, considered to be caused by postoperative changes. After 6 months of follow-up, there was no recurrence. Tg was <0.04 ng/mL, anti-Tg was 16.08 IU/mL, and thyroid-stimulating hormone (TSH) was 0.115 ng/mL. No adverse or unexpected events were observed during treatment. Her prognosis was good, and there were no signs of recurrence at her 6-month follow-up appointment. A timeline is shown in Figure 2.

A 24-year-old female was admitted to our hospital for a physical examination of an anterior cervical mass that had been present for 1 year and not treated. She had no family history of thyroid carcinoma. A mass was palpable in the anterior midline of the neck, measuring approximately 2 cm × 1 cm, with unclear borders and a hard texture. It was situated above the cricoid cartilage plate and moved up and down with swallowing. A color Doppler ultrasound showed hypoechogenicity in the conical lobe of the thyroid, with an unclear boundary of about 1.18 cm × 0.68 cm; the deep layer was closely related to the muscular layer; the blood flow signal was slightly rich; several hypoechoic lymph nodes were observed on the left side of the suprasternal fossa, with the larger one measuring approximately 1.02 cm × 0.5 cm; the shape was full, and the structure was unclear; multiple enlarged lymph nodes were observed between the bilateral sternocleidomastoid muscle and the zoster muscle, and the internal structure of some lymph nodes was unclear. Following an FNA biopsy of the nodules in the conical thyroid lobe, the patient was diagnosed with PTC.

During surgery, a hard mass measuring 1.0 cm × 1.0 cm was palpable at the conical lobe of the thyroid gland with unclear borders, and multiple enlarged lymph nodes were linearly distributed along the linea alba of the neck on the glandular surface of the thyroid isthmus below it (Figure 3). Considering the possibility of malignancy of the thyroid conical lobe mass, a series of lymph nodes between the conical lobe and the inferior part was removed, and the lymph nodes between the bilateral sternocleidomastoid and striate muscles were removed. IONM was used throughout the exploration to protect the RLN and EBSLN (11,12). The rapid pathological results showed three papillary carcinoma nodules in the conical lobe mass, and a lymph node were seen around one of the cancer nodules, which may be metastatic lymph nodes; the lymph nodes between the bilateral sternocleidomastoid muscle and striate muscle were thyroid carcinoma metastases. Considering that the patient needed radionuclide therapy after surgery, a total thyroidectomy was performed. 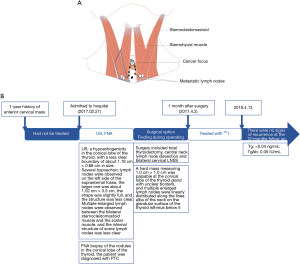 All procedures performed in this study were in accordance with the ethical standards of the institutional and/or national research committee(s) and with the Helsinki Declaration (as revised in 2013). Written informed consent was obtained from the patients for publication of this case report and accompanying images. A copy of the written consent is available for review by the editorial office of this journal.

Currently, the deep cervical lymph node subdivision is based on the standard subdivision system for deep cervical lymph nodes designated by the American Head and Neck Association and the American Joint Committee on Cancer (AJCC) (13). The LNSS is located between the superficial and deep cervical lymph nodes but has not been included in the consensus lymph node subregion due to the obstruction of muscles independent of levels IV and VI. LNSS involvement is less frequent, and metastatic lymph nodes are smaller, with the number of LNSS previously reported as 0–7. A study by Zhang et al. found that the mean longest diameter of LNSS metastatic lymph nodes was (0.5±0.12) cm (10). Because LNSS has a concealed location, small metastatic lymph nodes, few cystic degenerations and calcification, and is located in areas with more fat, it is difficult to detect by physical examination and ultrasonography during preoperative evaluation. Conventional computed tomography (CT) will also be affected by the anterior jugular vein enhancement shadows. Moreover, selective cervical lymphadenectomy or modified cervical lymphadenectomy are currently the surgeries of choice, and these procedures can easily overlook the LNSS area due to preservation of the sternocleidomastoid muscle, causing the area to be poorly exposed.

Surgical debulking is the primary treatment for DTC patients with metastatic lymph nodes. The standard and thoroughness of surgical debulking are the main foci of research. There is a clear understanding of debulking of the central and lateral cervical lymph nodes. For DTC CN1a and CN1b, therapeutic lymph node dissection of the central (levels VI–VII) and lateral cervical lymph nodes is recommended. For CN0, European and American guidelines recommend prophylactic central group lymph node dissection (pCND) only for patients with T3, T4, and cN1b (4,20). The pCND procedure is mainly performed in countries in the East Asian region (21). For cN0 patients, the guidelines issued by Japan and China recommend that central compartment dissection may be considered if there are high-risk factors (e.g., T3−T4 lesions, multifocality, family history, or childhood ionizing radiation exposure). Individualized treatment is feasible for low-risk CN0 patients (without high-risk factors) and is chosen according to prognosis and patient wishes (6,22). Our Case 1 thyroid tumor invading the anterior cervical band muscle was T3b stage. Case 2 was also T3b stage, and preoperative examination revealed multiple enlarged lymph nodes in the central compartment identified as cN1a. Both patients underwent central group lymph node dissection (CND). Postoperative paraffin pathology confirmed that both patients had central group lymph node metastases.

LNSS has a low metastatic rate and is not included in the routine surgical anatomical region of the thyroid. However, in clinical practice, surgeons should focus on the evaluation and clearance of LNSS to reduce postoperative recurrence in cases where there is lymph node enlargement in the area of LNSS detected by routine preoperative examination, cancer foci located in the lower pole, cancer foci invading the anterior cervical band muscle, extensive metastasis in the lateral cervical lymph nodes (especially lymph node metastasis in level IV), or stages T3/4 (23). There are no studies on factors associated with metastatic lymph nodes in the contralateral level LNSS. Perhaps we should pay attention to preoperative evaluation of bilateral level LNSS lymph nodes in patients with high risk factors for level LNSS metastasis. Both patients in our study were found to have enlarged lymph nodes in the LNSS area on clinical examination, so LNSS lymph node dissection was performed in both cases, and no bleeding or lymphatic leakage occurred after surgery.

LNSS is difficult to detect during the preoperative examination, but intraoperative exploration and dissection are not difficult. There are no important nerves and blood vessels in the LNSS area, and dissection of this area does not increase the difficulty of surgery and complications. However, attention should be paid to hemostasis and ligation of the proximal end of the vein to avoid the occurrence of postoperative hematoma or anterior cervical lymphorrhea caused by postoperative intermuscular vessels, deep oozing of the sternocleidomastoid muscle, and intermuscular lymphatic vessel injury.

Reporting Checklist: The authors have completed the CARE reporting checklist. Available at https://gs.amegroups.com/article/view/10.21037/gs-22-715/rc

Conflicts of Interest: All authors have completed the ICMJE uniform disclosure form (available at https://gs.amegroups.com/article/view/10.21037/gs-22-715/coif). The authors have no conflicts of interest to declare.

Ethical Statement: The authors are accountable for all aspects of the work in ensuring that questions related to the accuracy or integrity of any part of the work are appropriately investigated and resolved. All procedures performed in this study were in accordance with the ethical standards of the institutional and/or national research committee(s) and with the Helsinki Declaration (as revised in 2013). Written informed consent was obtained from the patients for publication of this case report and accompanying images. A copy of the written consent is available for review by the editorial office of this journal.