The usefulness of red blood cell distribution width and its ratio with platelet count in breast cancer after surgery and adjuvant treatment: a retrospective study

Breast cancer is one of the most commonly diagnosed cancers worldwide and is one of the most frequent causes of cancer-related deaths (1). Furthermore, in breast cancer, local relapse and distant metastasis are important for clinical management. In breast cancer patients, assessment of the patient’s prognosis is very important because of clinical decision-making in care and treatment after surgery. Several molecular diagnostic tests have been applied to obtain reliable prognostic information, such as Oncotype Dx. However, its clinical use is still limited owing to its uncertain role and high cost (2). Therefore, an indicator that is simple, convenient, and inexpensive to administer should be helpful for early recurrence detection and for guiding treatment decisions.

Recently, red blood cell distribution width (RDW) has been investigated for its association with cancer (3). RDW is a widely used laboratory parameter reported in complete blood count tests, and it reflects the heterogeneity in the size of circulating erythrocytes (4). Higher RDW values indicate greater variation in the size of red blood cells. Platelets play an important role in cancer progression and metastasis (5,6). Elevated platelets are associated with poor prognosis in cancers, such as colorectal cancer, endometrial cancer, gastric cancer, ovarian cancer, and pancreatic cancer (7-11). Furthermore, the RDW-to-platelet count to ratio (RPR) reflects the severity of inflammation and is used to predict fibrosis in chronic hepatitis (12). Furthermore, RPR is increasingly being recognized to have an important role and a potential biomarker in breast cancer patients (13). However, there are no reports on the prognostic value of RPR in breast cancer before and after treatment. Therefore, in this study, we aimed to investigate the prognostic value of RDW and RPR in breast cancer before and after treatment. We present the following article in accordance with the STARD reporting checklist (available at https://gs.amegroups.com/article/view/10.21037/gs-22-410/rc).

We retrospectively reviewed 411 patients diagnosed with primary breast cancer at Gyeongsang National University Changwon Hospital between December 2009 and December 2015. The exclusion criteria were as follows: age <19 years; noninvasive breast cancer or stage IV breast cancer; preoperative treatment such as neoadjuvant chemotherapy; insufficient information on laboratory data or pathologic results; and other diseases such as hematological disorders, liver cirrhosis, and heart failure. Ultimately, 395 patients with breast cancer were enrolled and analyzed in this study. All information, such as pathological results and, laboratory data, was obtained from medical records. The baseline characteristics of the enrolled patients are summarized in Table 1. The study was conducted in accordance with the Declaration of Helsinki (as revised in 2013). This study was approved by the Institutional Ethics Review Board of the Gyeongsang National University Changwon Hospital (No. GNUCH 2021-11-013) and the requirement for informed consent was waived because it was a retrospective study.

All patients underwent surgical resection including breast-conserving surgery or total mastectomy. Subsequently, adjuvant treatment, such as chemotherapy, radiotherapy, and endocrine therapy, was administered. After surgery, all patient received adjuvant chemotherapy followed by four cycles of doxorubicin (60 mg/m2)/cyclophosphamide (600 mg/m2) chemotherapy every 21 days and received four cycles of docetaxel (75 mg/m2) chemotherapy every 21 days in patient who have metastatic axillary lymph node or high-risk patients. Radiotherapy following breast-conserving surgery and total mastectomy in high-risk patients. And estrogen-receptor positive patient started endocrine therapy as like tamoxifen (in pre-menopausal woman) or aromatase-inhibitor (in post-menopausal woman). A regular follow-up evaluation was performed at 6-month intervals for during 1–5 years and at 1-year intervals for during 5–10 years after treatment. Follow-up investigations included physical examinations, laboratory analysis (complete blood count and carbohydrate-anti-gene 15-3 levels), and radiological assessment (mammography, ultrasonography, and bone scan).

Venous blood samples were obtained via peripheral venous puncture before treatment. After treatment, venous blood samples were obtained after surgery, adjuvant chemotherapy, and radiotherapy, before and after the median time of blood sampling was 29 months. RDW and platelet counts were measured using a hematology analyzer (XN-10; Sysmex Corporation, Kobe, Japan). According to the manufacturer’s instructions, the normal range of RDW is 11.5–14.5%, and platelet is 13–40 (×104/µL). The RPR was calculated by dividing the RDW by the platelet count (×104/µL).

Optimal cut-off value of RDW, RPR before and after breast cancer treatment for DFS

Optimal cut-off value for of RDW, RPR before and after breast cancer treatment for OS

A total of 395 patients with breast cancer enrolled in this study. The median age was 48.5 years old (range, 24–89 years). The median follow-up period was 84 months. After follow-up, 48 patients (12.2%) experienced recurrence and death of patients were 14 (3.5%) died. The study population was divided into four groups (high RDW, low RDW, high PRP, and low PRP) after treatment according to the optimized cut-off values determined by ROC analysis (Figure 3). The optimal cutoff values for disease-free survival (DFS) and, overall survival (OS) before and after treatment are shown in Tables 2,3. 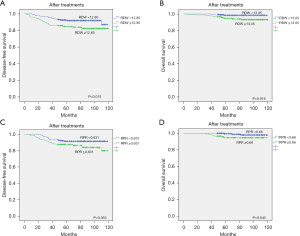 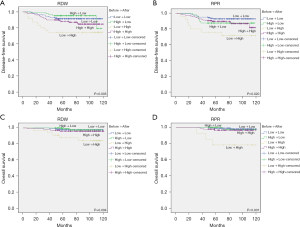 In our study, we suggested that elevated post-treatment RDW and RPR were associated with poor prognosis in patients with breast cancer, and these may be used as prognostic factors in cases of both high RDW and high RPR. To the best of our knowledge, this is the first study to evaluate the effects of RDW with RPR before and after treatment. In particular, our results demonstrated that elevate RDW and RPR values before and after treatments were independent factors for poor survival in breast cancer patients.

In cancer microenvironment, inflammation promotes tumor growth, invasion, angiogenesis, and eventually metastasis (14,15). During inflammation, red blood cell maturation disturbs the red blood cell membrane, leading to increased RDW (16). The mechanism underlying the relationship between RDW and survival or disease activity is not clear. However, high RDW thought to be caused by chronic inflammation, age-related diseases, and oxidative stress, which lead to changes in erythropoiesis (4,17). Because a malignant tumor may extend the inflammatory response in the process of its progression and increase circulation levels, RDW may be a potential biomarker of cancer growth and metastatic activity (18). In addition, RDW is an easily available and inexpensive parameter in blood samples and reflects the size heterogeneity of circuiting erythrocytes. Therefore, preoperative RDW was suggested as an independent predictor of breast cancer in a recent retrospective study (18).

Platelet count is a parameter that is measured in the complete blood count and is affected by systemic inflammation. A study showed that elevated platelet levels can be seen in many cancers, and that platelet count is inversely correlated with survival (19). Platelets are rich in growth factors such as platelet-derived growth factor-receptor (PDGF), transforming growth factor-beta. The PDGF-receptor is involved in cancer invasion and metastasis (20). In breast cancer, PDGF beta receptor expression is correlated with unfavorable pathological characteristics and survival (20).

In several studies, elevated RPR levels have been associated with poor prognosis in chronic hepatitis, pancreatitis, and acute myocardial infarction (12,21,22). Although the reason for this is uncertain, the imbalance between RDW and platelet count could be a significant prognostic factor for the poor prognosis of breast cancer patients with elevated RPR (13). Most of the aforementioned studies used preoperative RDW and PRP values, and significant values were obtained. However, in our study, there was no significant difference before treatment with RDW and RPR. Rather, only the after-treatment RDW and RPR values were significantly associated with survival. Therefore, we analyzed two points. One is that dividing different subgroups that one is high RDW/high RPR group which satisfies both high RDW and high RPR group and another is low RDW/low RPR group which satisfies both low RDW and low RPR group. Another point is that the RDW and RPR changed after initial treatments between the lower and higher groups. In this analysis, we revealed that when a lower value before treatment became higher after treatment, survival was very poor.

There are limitations in our study that were conducted in a single center, and it was performed retrospectively with a limited number of patients. In particular, in OS, it can be very difficult to conclude as the final death is only 14. Although the absolute values of RDW and RPR are currently difficult to determine, the overall elevated values are meaningfully available for each hospital. In addition, it is necessary to investigate patients with breast cancer who undergo neoadjuvant chemotherapy.

Recently, various blood cell markers have been reported to be prognostic factors. So, further study on details including mechanism or intervention should be carried out.

To our knowledge, the present study is the first to reveal a relationship between RDW, RPR levels in before and after treatment, and survival. The results of our study confirmed that observing the RDW, RPR levels in before-after treatment, and the process of continuous change can be important indicators for predicting the prognosis of breast cancer patients.

Reporting Checklist: The authors have completed the STARD reporting checklist. Available at https://gs.amegroups.com/article/view/10.21037/gs-22-410/rc

Conflicts of Interest: All authors have completed the ICMJE uniform disclosure form (available at https://gs.amegroups.com/article/view/10.21037/gs-22-410/coif). The authors have no conflicts of interest to declare.

Ethical Statement: The authors are accountable for all aspects of the work in ensuring that questions related to the accuracy or integrity of any part of the work are appropriately investigated and resolved. The study was conducted in accordance with the Declaration of Helsinki (as revised in 2013). The study was approved by the Institutional Review Board of Gyeongsang National University Changwon Hospital (No. GNUCH 2021-11-013) and individual consent for this retrospective analysis was waived.