Breast cancer with triple-negative receptors lacks the genes for the estrogen receptor (ER), progesterone receptor (PR), and human epidermal growth factor receptor 2 (HER2)/neu. It accounts for 15–20% of all breast cancers and has a poor prognosis (1,2). In the absence of ER, PR, and HER2/neu, optimizing the therapeutic management of patients is difficult (2,3). Despite the improvements in combined surgical and radiochemotherapy (4-6), there remains a pressing need for new therapeutic approaches and molecular targets.

Keratin23 (KRT23) belongs to the acidic type I keratins; it is strongly expressed in colon adenocarcinomas but absent in normal colon mucosa. KRT23 knockdown decreases proliferation and affects the DNA damage response of colon cancer cells (7). Similarly, researchers have found that phosphoprotein KRT23 accumulates in microsatellite-stable (MSS) colon cancers in vivo and impacts the viability and proliferation in vitro (8). However, KRT23 has not been reported in triple-negative breast cancers (TNBC). Non-specific cytotoxic cell receptor 1 (NCCRP1) is a paralog of the F-box superfamily of proteins (ubiquitin ligases) that regulate the cell cycle (9,10). In particular, NCCRP1 can act as a prognostic signature in pancreatic cancer and squamous cell carcinoma (11,12). However, the role of NCCRP1 in TNBC is unknown.

Data retrieval and determination of the prognostic value

This study used univariate and multivariate Cox regression analyses to construct a risk model and identify prognosis-related genes. Our survival analysis was based on the Kaplan-Meier analysis (KM). XCELL (13), TIMER (14), EPIC (15), QUANTISEQ (16), MCPCOUNTER (17), CIBERSORT-ABS (18), and CIBERSORT (18) software were used to determine the extent of tumor immune cell infiltration. To evaluate the clinical responses to breast cancer treatment, the half maximal inhibitory concentration (IC50s) of common chemotherapeutics were calculated using “pRRophetic” and “ggplot2”.

Overexpression of KRT23 and NCCRP1 (lv-KRT23 and lv-NCCRP1) were constructed and transfected in MDA-MB-231 cells using lentiviral overexpression plasmids Ubi-MCS-SV40-puromycin. Cells transfected with lv-negative control (NC) lentivirus served as a negative control. Next, we used the hU6-MCS-CMV-puromycin plasmid to knock down KRT23 and NCCRP1 in cells (sh-KRT23 and sh-NCCRP1) before transfection in MDA-MB-231 cells, with sh-NC cells used as a negative control. The culture was performed in 5% carbon dioxide (CO2) incubators (Thermos, USA). The interfering nucleotide sequence was designed according to the Invitrogen RNA interference sequence design website (https://rnaidesigner.thermofisher.com/). The RNA interference target sequences are presented in Table S2.

Immunohistochemistry was performed according to the manufacturer's instructions (Solarbio, Beijing, China). Sections were observed, and images were captured under a Leica DMRB microscope (Leica Microsystems, Germany). An extraction kit for total proteins (Keygen, Nanjing, China) was used to extract proteins from cells. Protein concentrations were determined using the BCA-100 Protein Quantitative Analysis Kit (Shanghai, China). WB was performed according to the standard protocols, and WB analysis was conducted using the antibodies listed in Table S3.

Briefly, MDA-MB-231 cells (1×103) were seeded into 96-well plates. At various time points (0, 1, 2, 3, and 4 days), we determined the value of absorbance (at 450 nm) for each cell according to the instruction manuals (Dojindo, Japan). To conduct the EdU assay, we followed the instructions provided with the EdU Cell Proliferation Assay Kit (RiboBio Co., Ltd., Guangzhou, Guangdong, China). Finally, the EdU-stained cells were examined under a confocal microscope (Carl Zeiss, Germany).

To explore the effect of SOX10 on the KRT23 and NCCRP1 promoter activity, the sequences of the KRT23 and NCCRP1 promoters were sub-cloned downstream of the luciferase reporter gene to create pGL3-KRT23 pro-Wild-type (Wt) and pGL3-NCCRP1 pro-Wild-type (Wt) plasmids. To test the binding specificity, a corresponding mutant was created with a changed region binding site to create pGL3-KRT23 pro-Mut-type (Mut) and pGL3-NCCRP1 pro-Mut-type (Mut) plasmids. The sequences of the wild-type KRT23 and NCCRP1 promoters were obtained from the UCSC genome browser (http://genome.ucsc.edu/). Luciferase activity was measured using a luciferase assay kit (K801–200, BioVision Inc., Milpitas, CA, USA). The relative luciferase activity was calculated based on firefly fluorescence versus Renilla fluorescence.

Identification of potential key genes associated with the prognosis of TNBC 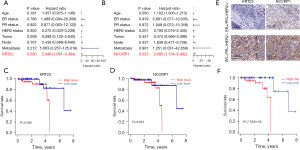 Next, the risk score was calculated for each of the 105 patients based on the KRT23 and NCCRP1 expression levels from CPTAC, and the patients were then divided into high- and low-risk groups based on a cutoff value (the median risk score). An analysis of the Kaplan-Meier survival data revealed that the high-risk group had worse overall survival (OS), which suggests that the risks may have a prognostic value (Figure 2F).

The Venn diagram analysis identified the differentially expressed transcription factors, which co-regulated KRT23 or NCCRP1 expression in TNBC. The results showed that KRT23 and NCCRP1 had 12 differentially expressed common transcription factors (Figure 4A). An overall correlation between the 14 features is displayed in a heatmap, and a significant correlation was found between SOX10 expression and KRT23 or NCCRP1 expression (Figure 4B). 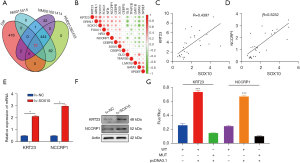 The risk score was associated with immune cell infiltration and chemotherapeutics

In this study, multiple software programs (XCEL, TIMER, QUANTISEQ, MCPCOUNTER, EPIC, CIBERSORT-ABS, CIBERSORT) were used to analyze the relationships between patients in the high- and low-risk groups and immune cells in the risk prediction model (Figure 5A). To determine whether the chemotherapeutic treatment efficacy was correlated with the risk scores, we examined the relationship between risk scores and IC50. 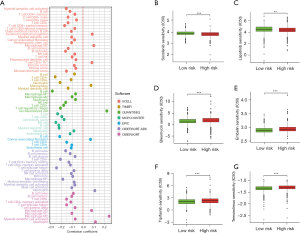 In the present study, we sought to determine the association between the risk score and the efficacy of common chemotherapeutic agents in the treatment of breast cancer in TCGA database. Our results revealed that a high-risk score was related to a lower half maximal inhibitory concentration (IC50) of chemotherapeutics such as Sorafenib (Figure 5B) and Lapatinib (Figure 5C), while a low-risk score was related to a lower IC50 of chemotherapeutics such as Bleomycin (Figure 5D), Embelin (Figure 5E), Tipifarnib (Figure 5F), and Temsirolimus (Figure 5G). These results indicated that the model was a potential predictor of chemosensitivity.

Breast cancers characterized by triple-negative status tend to be more malignant and have a poorer prognosis (1,2,4-6,19,20). To decrease the mortality rate and improve the prognosis of breast cancer patients, a model for predicting breast cancer risk should be developed. In this study, a risk model was constructed and validated using the CPTAC databases.

Using multivariate and univariate Cox regression analyses, an assessment model was established for KRT23 and NCCRP1. We found that high expression levels of KRT23 and NCCRP1 were indicative of poor prognosis and that the gene expression patterns of multiple genes are considerably more predictive of future risks and have a higher level of consistency when assessing risk. KRT23 is a newly discovered member of the keratin family. Various tumor tissues, including pancreatic cancer (21), colorectal carcinoma (7,22-24), and hepatocellular carcinoma (25,26), have exhibited aberrant expression of KRT23. Our findings support the same results, namely that the expression of KRT23 was increased in TNBC and promoted cell proliferation. In this study, we investigated the expression and functions of NCCRP1 in cells. Our findings also found the same; the expression of NCCRP1 was increased in TNBC and promoted cell proliferation. Therefore, we can design specific antibodies against KRT23 and NCCRP1 to block their effects on breast cancer proliferation.

The sensitivity to chemotherapy was different between the high- and low-risk groups. In conclusion, these results indicated that the model was a potential predictor of chemosensitivity.

We thank all of the participants in the present research. We also thank the reviewers for their valuable advice.

Reporting Checklist: The authors have completed the MDAR reporting checklist. Available at https://gs.amegroups.com/article/view/10.21037/gs-22-486/rc

Conflicts of Interest: All authors have completed the ICMJE uniform disclosure form (available at https://gs.amegroups.com/article/view/10.21037/gs-22-486/coif). The authors have no conflicts of interest to declare

Ethical Statement: The authors are accountable for all aspects of the work in ensuring that questions related to the accuracy or integrity of any part of the work are appropriately investigated and resolved. This study was conducted according to the Declaration of Helsinki (as revised in 2013) and was approved by the Ethics Committee of the First Affiliated Hospital of Gannan Medical University (No. LLSC-2022033101). Informed consent was obtained from the patients or their guardians.