A cause of unbearably painful breast, diffuse dermal angiomatosis

Diffuse dermal angiomatosis (DDA) is a rare disorder of excess vascular proliferation characterized clinically by breast pain and benign violaceous, erythematous plaques with central ulcerations. Histologically, there is infiltration of the recticular dermis by endothelial cells. This disease is a rare variant of reactive cutaneous angioendotheliomatosis (RAE). Herein, we report a patient who presented with pain and discoloration of her breasts, was diagnosed with DDA, and was subsequently treated with isoretinoin.

A 59 year old African American woman presented to clinic with a one month history of severe left breast pain and discoloration. She reported that she had constant and unbearable pain in the inferior portion of both breasts, but was worse on the left side. She described a red and purple “reticular vascular marking” that appeared on her breasts shortly after the time of pain, which was followed by ulcerations (Figure 1). These lesions first appeared on the left breast but later extended to her right, as well. Pain killers prescribed by the primary care physician had no effect. 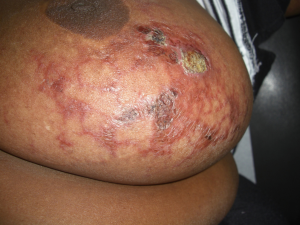 Figure 1 Left breast of a patient with diffuse dermal angiomatosis. Note the red and purple reticular pattern with associated ulcerations

The patient’s past medical history included dyslipidemia, hypertension, chronic obstructive pulmonary disease, and a previous cerebrovascular accident. Surgical history was pertinent for breast reduction surgery in 1989. She had a smoking history but denied alcohol use. Physical examination revealed a violaceous and ulcerated reticular pattern over inferior portion of both breasts, with the left worse than the right. There were visible vessels surrounding the patterns. Results of punch biopsies taken near ulcerating lesions and of the red reticular pattern confirmed the diagnosis of diffuse dermal angiomatosis. The lesions were characterized by proliferation of mildly hyperplastic endothelial cells within the reticular dermis and lining capillary-sized vessels. Many of the lumens of the vessels were obliterated by the numerous endothelial cells lining the vessels (Figure 2). Staining for endothelial cells highlighted the vascular spaces proliferating within the reticular dermis, demonstrating variable size and extent of distribution (Figure 3). The patient underwent magnetic resonance angiography and magnetic resonance venography to rule out any thrombotic causes of her disease, which turned out to be negative for any significant thrombotic activity. 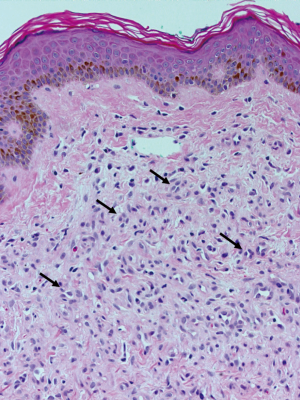 Figure 2 Punch biopsy of the diseased skin of the breast shows a proliferation of mildly hyperplastic endothelial cells within the reticular dermis (arrows), lining capillary sized vessels. In some instances vessel lumens may be appreciated, but are often obliterated by the plump endothelial cells themselves. No thrombi are evident in this section. (H&E, 200×) 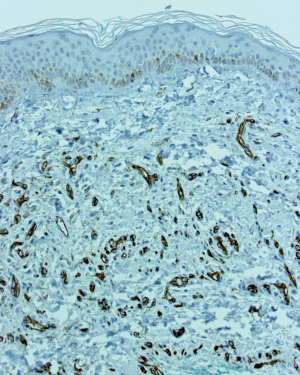 Figure 3 This stain for endothelial cells (CD34) highlights the vascular spaces proliferating within the reticular dermis, demonstrating their variable size and the extent of their distribution. (CD34 immunohistochemical stain, 200×)

The patient was started on a regimen of isoretinoin 100 mg/day with monthly follow-up. Within two weeks of starting treatment, the patient noticed improvement in symptoms. The isoretinoin was slowly tapered over the following four months and the patient continued to improve, however, it took more than half a year for her breast pain to completely diminish.

Breast pain is one of the most common complaints of many female patients and mastalgia is reported as the chief complaint in up to half of breast clinic patients (1). One study demonstrated that 77% of women in a screening population admitted to experiencing breast pain in recent months (2). Most of breast pain is described as minor to moderate and is attributable to the menstrual cycle. While the differential diagnosis list can be extensive, often the pain resolves with medication or reassurance. Severe or extremely tender breast pain often presents with dramatic clinical signs and can represent inflammatory disorders, malignancies, or bacterial and viral infections (3). Miscellaneous causes such as primary skin disorders are less commonly the etiology. In this case report, we described the rare finding of breast DDA in a patient who was successfully treated with isoretinoin.

In 1994 DDA was recognized as a variant of reactive cutaneous angioendotheliomatosis, but was only recently described as a distinct disease (4). The disease is characterized by prominent angiogenesis and is usually secondary to a vascular disorder (5). The disease often presents with erythematous patches, including ulcerations and tenderness, and has been described in many locations with the lower extremities being the most common. DDA is often associated with comorbid conditions such as cardiovascular disease, hypertension and diabetes, with peripheral vascular disease prominent in most cases (6). In this case the involvement of the breasts is a more unusual location.

Histologically, DDA is distinctive and is characterized by extensive endothelial cell proliferation around collagen bundles. The histology of angiomatosis is one of closely packed and mostly dermal capillary size vascular spaces with sometimes dilated and at other times closed lumens. The spaces are lined by plump, activated appearing endothelial cells. It is sometimes possible to identify this proliferation arising in association with the lumens of pre-existing dilated blood vessels. In contrast, reactive cutaneous angioendotheliomatosis is histologically noted by endothelial cell proliferation within the vascular lumina (6). Throughout the entire dermis, there is diffuse proliferation of CD31-positive endothelial cells forming small vascular channels with a spindle morphology and vacuolated cytoplasm (7). Occasionally erythrocytes and hemosiderin deposits are noted, but atypical endothelial mitosis and atypia are absent (7).

Isoretinoin is a retinoid compound most often used in the treatment of severe acne with dosing between 0.5 and 2 mg/kg/day. Isoretinoin has been shown to have an antiangiogenic effect (8,9), in addition to its ability to stimulate tissue plasminogen activator production which results in an increase in fibrinolysis and wound healing (10). Because DDA is a disorder of hypervascularity and tissue destruction, the mechanisms of isoretinoin lend this drug an advantage to helping attenuate this disease process.

The drug has a number of side effects with the most concerning its effect as a teratogen. All female patients who can become pregnant must be enrolled in the iPLEDGE program, which is designed to prevent pregnancy while using this medication. Other side effects include dry skin and itching, epistaxis, chilitis and psychiatric disorders, including severe depression and suicide idealization. Because of these risks, we began with moderate dosing of the drug at 50 mg/day and used a taper over the next few months. By tapering the drug, we were able to attenuate some of the side effect of the medication. Our patient did complain of depression, however, it was unclear whether this was due to the side effect of isoretinoin, or because of prolonged course of the disease and breast pain.

In conclusion, DDA is a rare disease, however, it may present as an unbearable pain in the breast. After an investigation for vascular pathology, we were able to successfully treat our patient with a tapered isoretinoin regimen over the course of a few months.