With the improvement of systemic treatment, the surgical management of breast cancer experienced substantial revolution over the years. Although breast-conserving therapy (BCT) has become the primary surgical treatment for breast cancer worldwide, and approximately 60–70% of stage 0–II patients in the United States undergo BCT (1), a multi-center retrospective study in China indicated that modified radical mastectomy remained the primary strategy for treating breast cancer (2).

The follow-up data on the breast cancer patients were acquired from the Department of Clinical Statistics of FUSCC. LRR was defined as any progression in the ipsilateral breast, skin, muscles of the chest wall and/or axillary/supraclavicular lymph nodes (LNs). Survival was calculated from the date of surgery to the date of clinical relapse. Patients whose last follow-up was ≤3 months after surgery were regarded as lost to follow-up and were excluded from analysis.

The clinical pathological characteristics of patients’ primary breast disease were demonstrated in Table 1. The majority of cases (78.1%) were invasive breast cancer and breast cancer in situ (17.1%). The median size for invasive breast cancer was 2.2 cm (IQR: 1.5–3.0 cm), for breast cancer in situ was 2.0 cm (IQR: 1.2–2.5 cm) and for other breast tumor was 4.5 cm (IQR: 2.5–5.6 cm), respectively. Of all patients, 26 had previous breast-conserving surgery and developed ipsilateral breast recurrence. They subsequently had mastectomy and breast reconstruction; 39 cases received neo-adjuvant chemotherapy prior to surgery and reconstruction, seven of which achieved pathological complete remission (pCR). 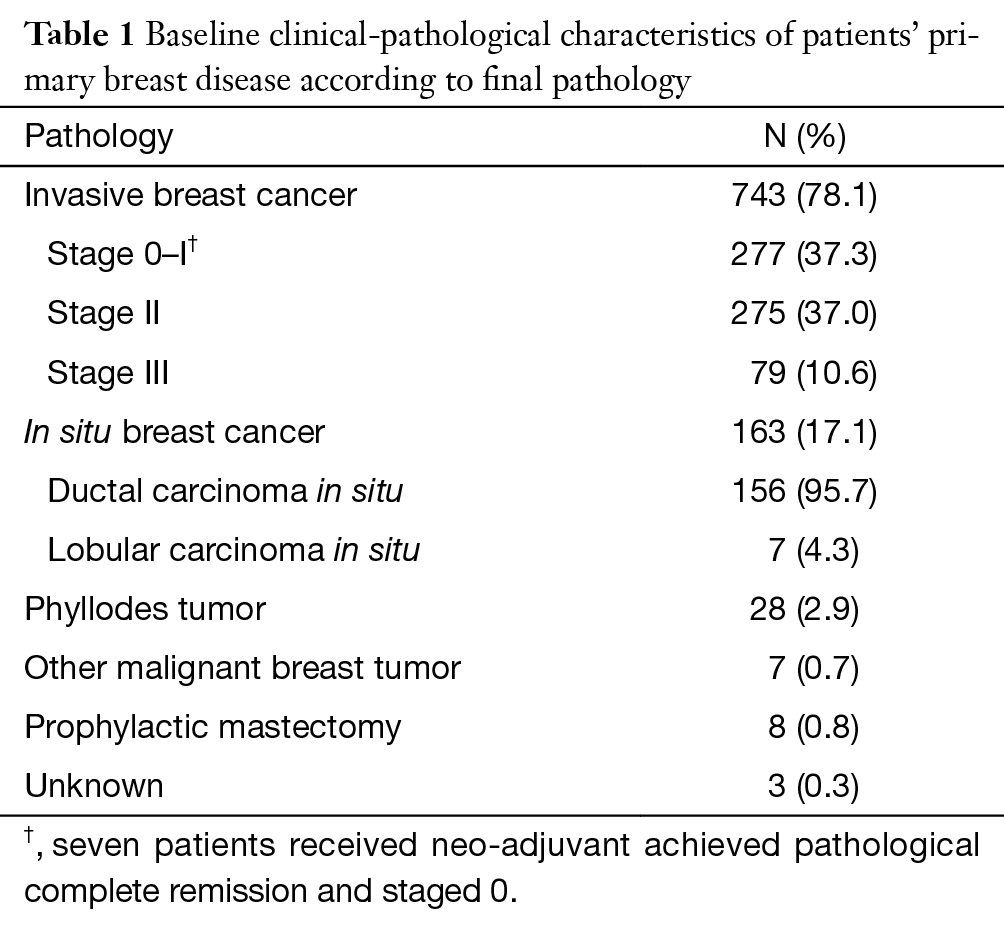 Current status and trend of breast reconstruction in FUSCC 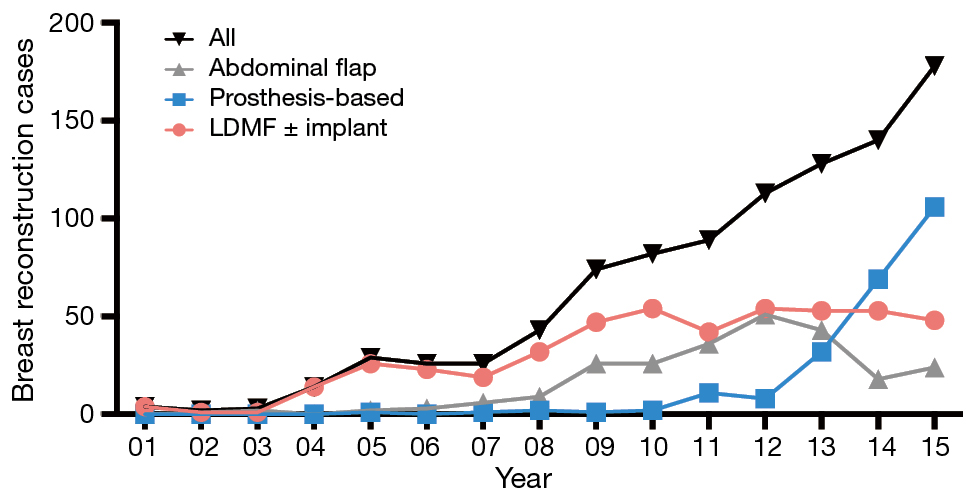 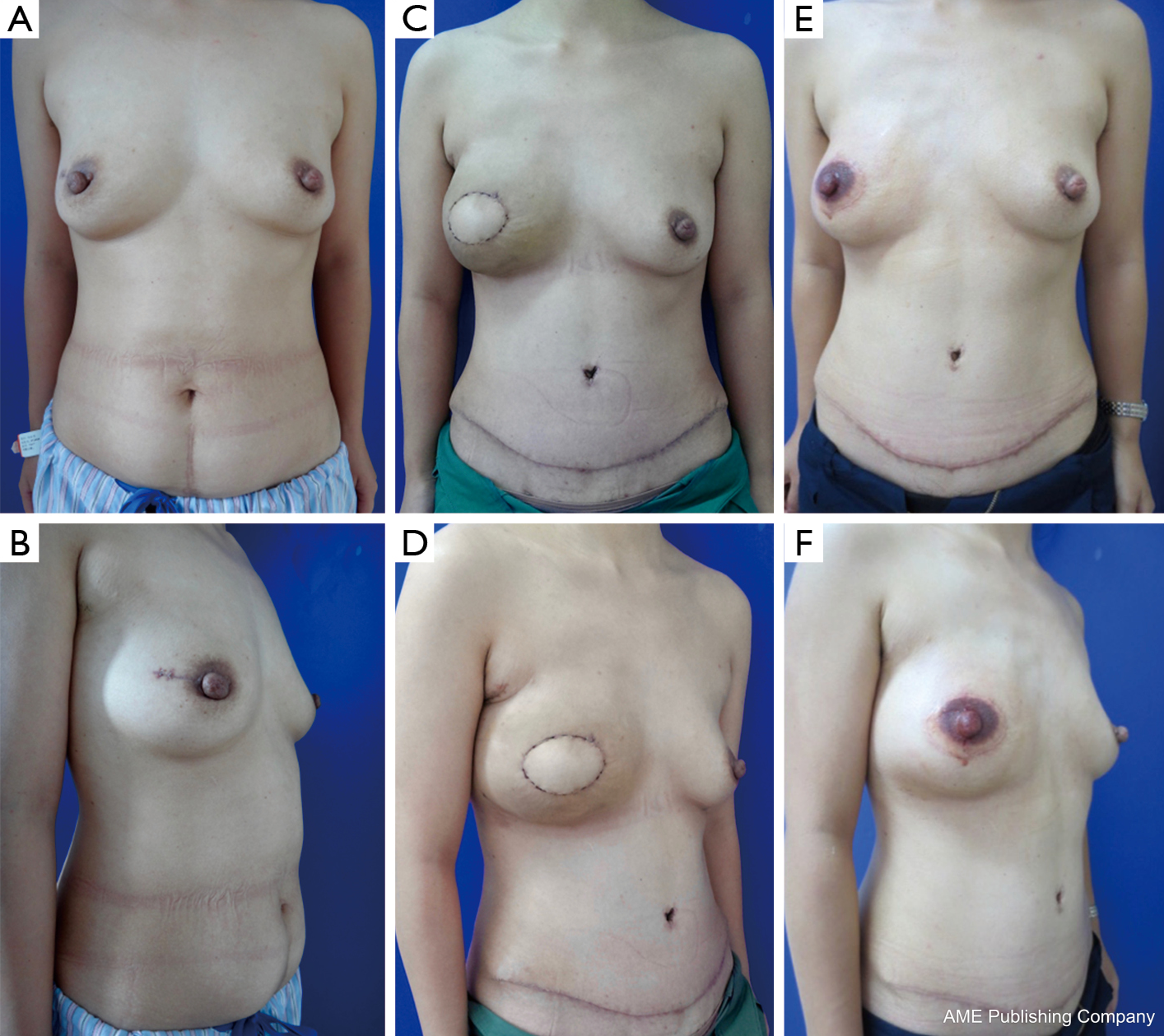 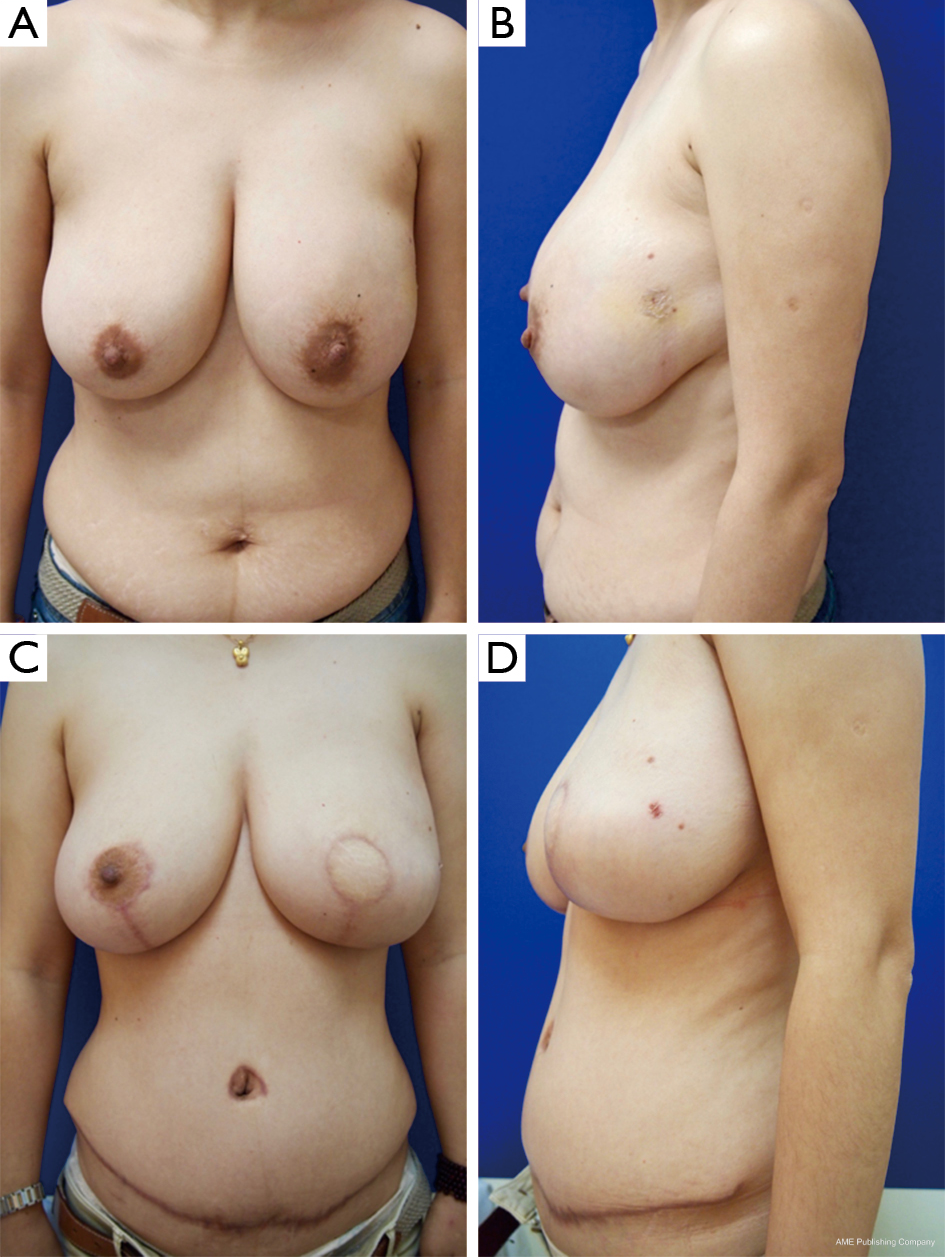 For reconstructive patients, we routinely performed SSM. A total of 66 NSMs (6.9%) were performed in 61 patients, 11 of which in LDM ± implant group and 55 in prosthesis-based group. The breast diseases for these cases were as follows: 34 (61.8%) were invasive breast cancer; 14 (25.4%) were in situ breast cancer; 12 (21.8%) were phyllodes tumor; five for prophylactic mastectomy; and one for other malignant breast tumor. One case received intra-operative single-dose nipple-areola complex (NAC) radiotherapy; in another case, the patient required to resect the NAC because of concerns of NAC recurrence. None of the patients developed NAC, other loco-regional or distant recurrence in our cohort.

Although SSM is routinely performed for patients who received breast reconstruction in our institute, the use of NSM is still limited. In our cohort, there are 6.9% NSMs performed, all of which are highly selected cases—no suspected cancer infiltration to NAC measured by imaging techniques, phyllodes tumor and prophylactic mastectomy. NSM, with preservation of the NAC, is reported to improve patients’ satisfaction, body image, and psychological adjustment (12,13). However, the indication of NSM is still under debate. Multiple studies have demonstrated that tumor size, tumor location, LN metastasis, lymphovascular invasion, histologic type, immunological characteristics like HER2 should be taken into consideration when propose NSM to breast cancer patients (14-16). In terms of LRR of NSM, none of our cases developed loco-regional or distant recurrence because of relative short follow-up time and highly selective cases. According to previous studies, Orzalesi et al. reported loco-regional, NAC, systemic recurrence accounting for 2.9%, 0.7% and 1.0% respectively, with 0.7% death record among a 6-year study in Italy (17). NAC recurrence cases could be treated with NAC removal and had good prognoses, which suggested that NSM might be a safe procedure after selecting proper patients (18).