The use of the Alexis device in breast augmentation to improve outcomes: a comparative randomized case-control survey

Since its introduction in 1895, augmentation mammaplasty has gained widespread acceptance (1), and it is one of the most common surgical procedures. Multiple surgical approaches have been widely adopted (2). The most popular are the inframammary, periareolar, and axillary approaches, and less common are the periumbilical and transareolar; all these techniques have their particular advantages and drawbacks (2-8).

Limited incisions are becoming an increasingly important factor in aesthetic surgery in order to increase patient satisfaction. Although breast augmentation is one of the most requested cosmetic operations, the resulting scar is an important issue for patients. Consequently, the use of limited incisions in breast surgery has gained increasing popularity, and the reduction of visible scarring has become a key goal (9-11).

Between January 2010 and November 2012, 40 consecutive patients undergoing breast augmentation (14) with an inframammary approach were enrolled in the present study. Patients were informed about the study and gave written consent to it. Patients were randomly assigned to group 1 (n=20) or group 2 (n=20). The first group (group 1) underwent breast augmentation with the standard technique (14). The second group (group 2) underwent breast augmentation with a modified standard technique, limiting skin incision length by using the Alexis® (Applied Medical Resources Corporation) device. Only round textured silicone gel-filled breast implants (MemoryGel® SILTEX® Round Moderate Plus Profile Implants, Mentor, 201 Mentor Drive Santa Barbara, CA, USA) were used in both groups in order to minimize the bias. All implants were placed in a subpectoral pocket.

Alexis® (Applied Medical Resources Corporation) is a wound protector/retractor that provides circumferential, atraumatic retraction, while maintaining moisture at the incision site. It is available in different sizes according to the length of the surgical incision. In the current study, the small size was used (for incisions between 2.5–6 cm, cod C8401). Its self-retaining design allows holding the incision site open, and the surgeon can easily access the operative field enhancing working space and visibility. As such, it allows for maximum exposure with a minimum incision size. Moreover, it reduces the need for hand-held retractors and it has been proven to reduce superficial surgical site infection (12). The cost of the device is approximately 40 Euros in Europe.

Augmentation mammaplasty is performed according to Tebbetts’ technique (14). The incision length is determined according to the dimension of the implant selected; the initial incision can be extended during surgery as needed. Hemostasis is obtained. Perioperative i.v. antibiotic therapy with amoxicillin + clavulanic acid and gentamycin was administered. Suction drains are positioned, one per site. Pocket irrigation is then performed with antibiotic (generally gentamycin) diluted in physiologic solution (15). Gloves are changed before the implant is placed. The introduction of the implant is performed with the use of hand-held retractors. Routine placement of suction drain remains intact until daily drainage is less than 30 mL.

The surgical procedure is the same as described in group 1. The incision size is planned as in group 1 and extended as needed, in order to assess in which group the scar was lengthened more (Figure 1). After fashioning the pocket, the Alexis® (Applied Medical Resources Corporation) device is inserted (Figures 2-6) and the dissection is extended according to the implant size. Hemostasis is also obtained. Suction drains are positioned, one per site. The pocket is then irrigated as above and the implant is introduced leaving the Alexis® (Applied Medical Resources Corporation) inserted (Figures 7-9). If needed, the incision can be lengthened. Finally, the Alexis device is removed (Figure 10) and the incision is closed in the usual manner in two layers. Drains management is as above. One of two surgeons performed all procedures and assessments (Luca Andrea Dessy or Marco Mazzocchi). 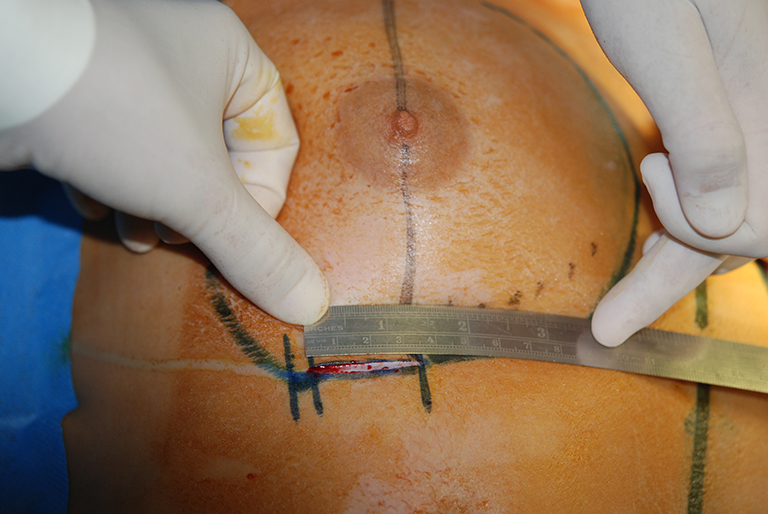 Figure 1 Intraoperative view of the inframammary incision; its length is measured with a ruler according to the dimension of the implant selected. 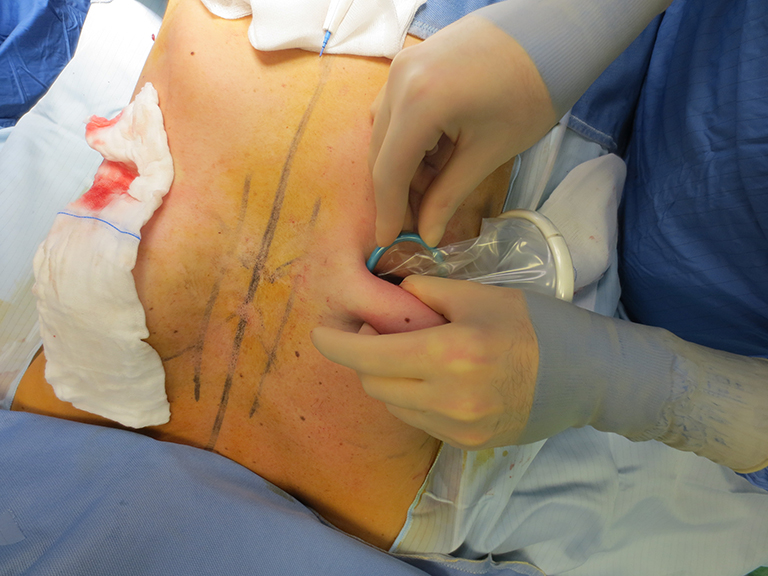 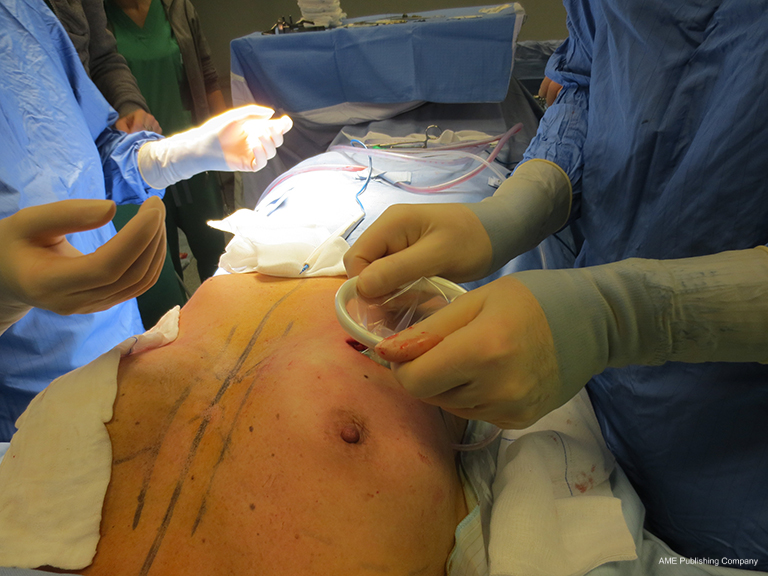 Figure 3 Intraoperative view of the Alexis® (Applied Medical Resources Corporation) device inserted in the pocket: the external ring is unfolded. 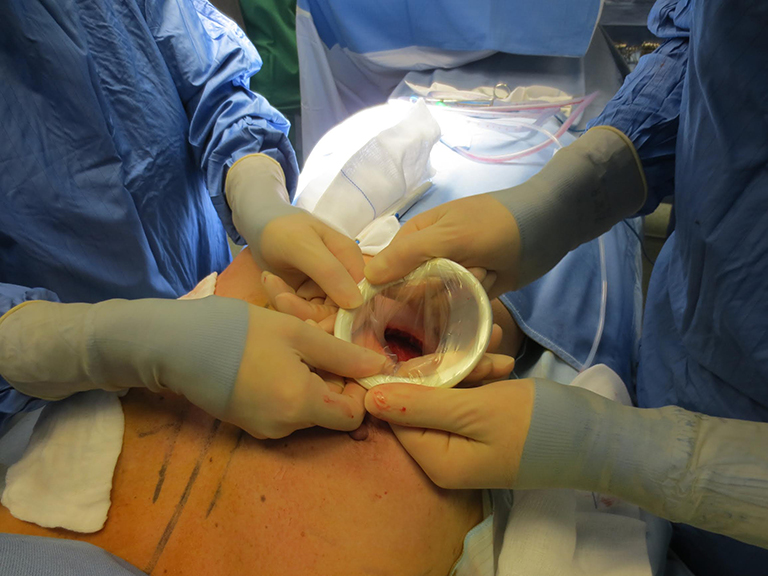 Figure 4 The external ring is placed in traction and folded over itself until it contacts the skin. 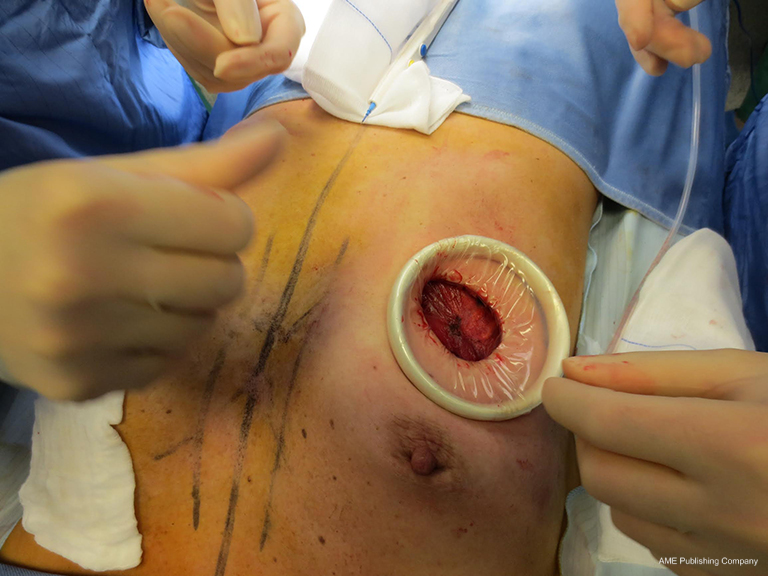 Figure 5 Once securely in place, the Alexis® (Applied Medical Resources Corporation) wound retractor keeps the incision open during the procedure. 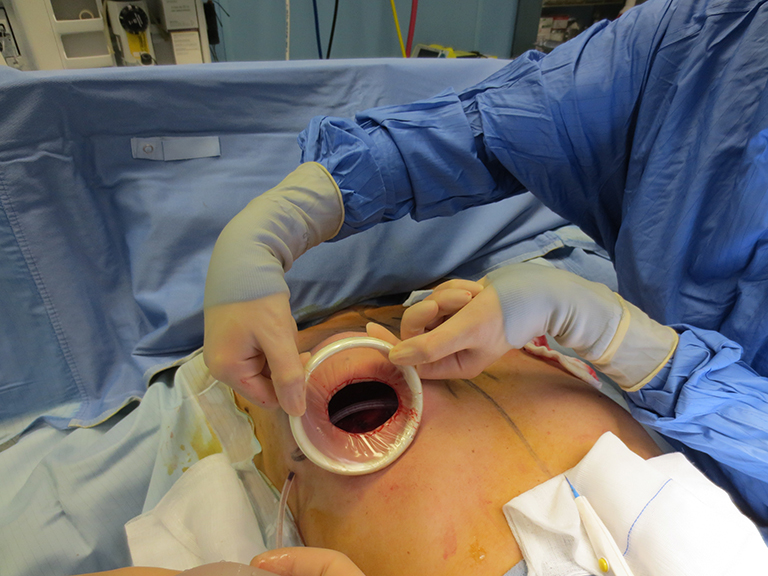 Figure 6 With the pocket exposed, the dissection is completed and the suction drains are positioned. 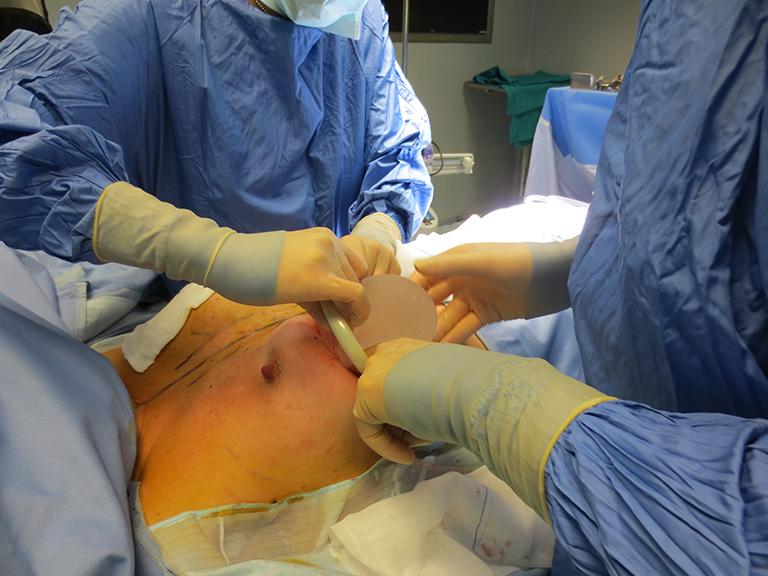 Figure 7 Intraoperative view of the introduction of a round textured implant with the aid of the Alexis® device. 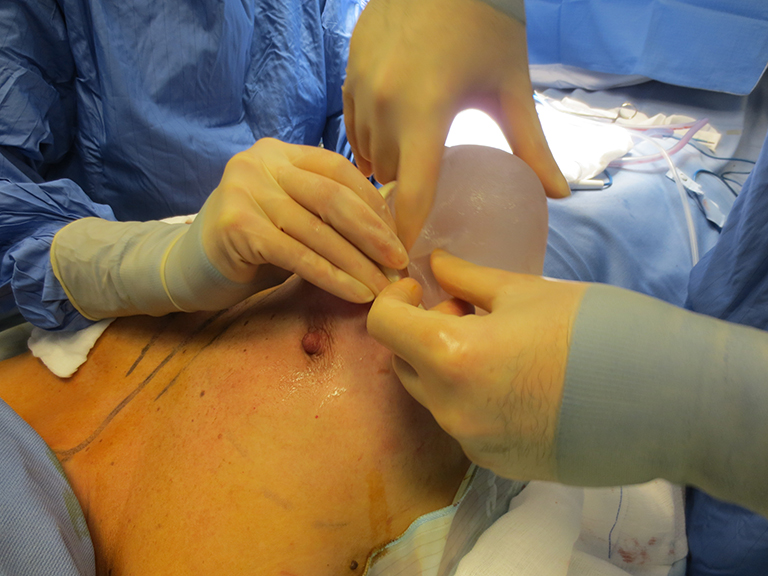 Figure 8 The Alexis® (Applied Medical Resources Corporation) device is held open, and the breast implant is pushed forward into the pocket. 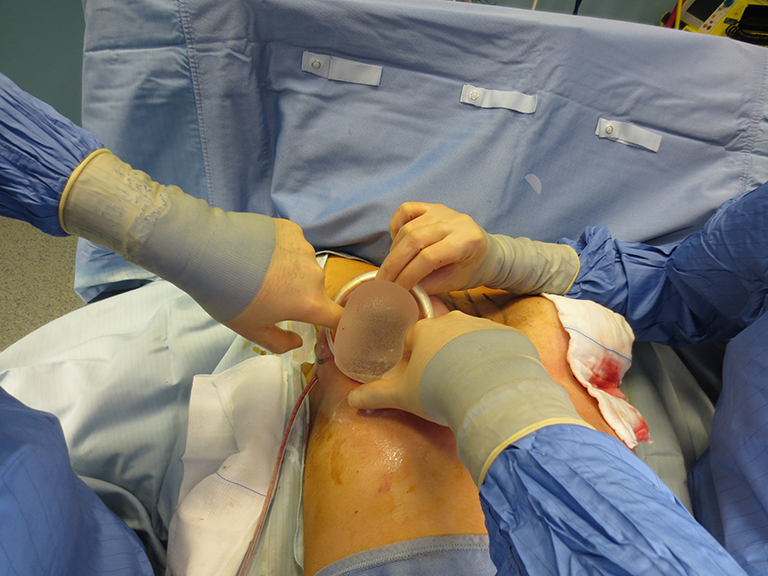 Figure 9 The insertion of the implant is completed with the aid of the Alexis® (Applied Medical Resources Corporation) device. 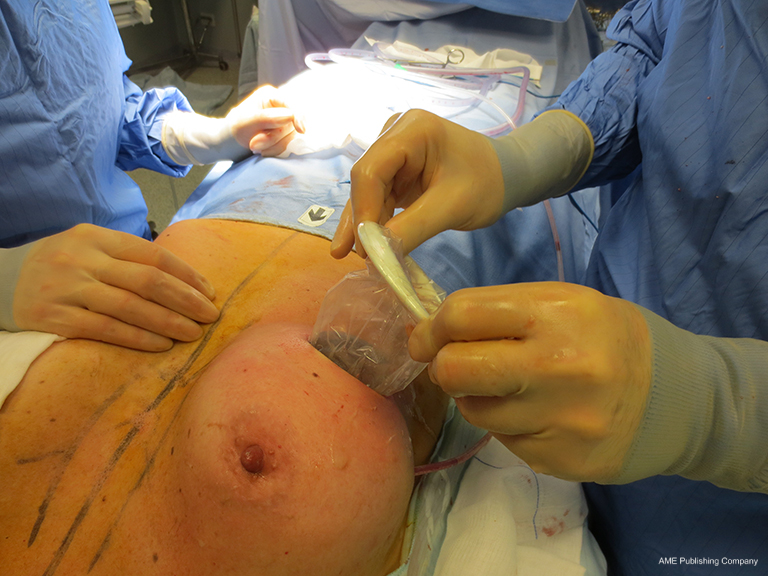 Figure 10 After completing the insertion of the implant, the Alexis® (Applied Medical Resources Corporation) device is removed.

Patients were followed up for a 12-month period. The time of surgery and days of drain duration were recorded for both groups and compared with the Wilcoxon rank sum test. The length of the incisions was measured at surgery end and after twelve months in both groups. The statistical significance of the difference in scar length between the two groups was evaluated with the Wilcoxon rank sum test.

Final scar appearance was evaluated by the patients themselves and by a panel of three physicians non-involved in the study using a visual analogue scale (VAS) giving a score from one (imperceptible scar) and ten (very visible scar) (16).

The average time of surgery in both groups is reported in Table 1. Post-operative complications are reported in Table 2. The case of implant infection occurred in group 1 required implant removal and surgical debridement of the implant pocket, a cycle of i.v. antibiotics and subsequent oral targeted antibiotic therapy. After 6 months, a new implant of the same size was positioned. With reference to post-operative hematomas, one patient from group 1 presented a large hematoma that required surgical evacuation, while the other patient from group 1 and the patient from group 2 had small hematomas that were conservatively treated. Two patients from group 1 developed a grade III capsular contracture, while one patient from group 2 developed a grade II capsular contracture according to Baker grading (17). With reference to the drain secretions, patients in group 2 had shorter drain duration (Table 3). The duration of drain placement in group 1 was 4.5±3.0 days, while in group 2 was 1.4±1.3 days. The length of the incisions immediately after surgery and at 1-year post-operative follow-up visit in both groups is reported in Table 4 (Figures 11,12). The difference in scar length between the two groups was statistically significant (P<0.05).

Figure 11 The length of the incisions immediately after surgery (A) and during follow-up visits at 1 month (B) and 1 year post-operatively (C) in a patient from group 1.

Figure 12 The length of the incision immediately after surgery (A) and during follow-up visits at 1 month (B) and 1 year post-operatively (C) in a patient from group 2.

Surgeons and patients were mostly satisfied with the final appearance of the scar at the inframammary fold (Tables 5,6).

The choice of breast augmentation procedure is determined almost entirely by three variables: the selection of incision location, the pocket plane for implant placement (subpectoral, dual plane or subglandular), and the appropriate implant type (6,18).

With reference to the incision site, the inframammary approach is definitely the most common one practiced by plastic surgeons, and this in spite of its perceived disadvantage: the visibility of the scar. In fact, an inframammary incision can result in a wide and unsightly scar, particularly in patients with a tendency towards hypertrophic scar formation (3,4,9,10,19) especially considering that the length of the scars is an average of 5 cm.

However, this type of approach has many advantages: it is easy to learn; it offers a direct access to the submuscular, subpectoral or subglandular planes; the dissection can be precisely limited to the desired pocket boundaries.

According to our opinion, the inframammary approach is the first option when correct indications exist. In order to overcome the problem of the length of the scars, we decided to adopt the Alexis device, which is routinely used as a retractor in abdominal surgery, in augmentation mammoplasty.

With the use of this device, the length of incision has been significantly reduced. This device allows a panoramic view of the surgical field, facilitating dissection and hemostasis. Moreover, the use of the Alexis retractor protects surgical wounds from contamination, thus preventing infection (12). This represents an additional advantage because skin contact of breast prostheses is regarded as a cause of ongoing subclinical infection leading to subsequent symptomatic capsular contracture (20-22). Many surgeons employ a no-touch technique, aiming to lower capsular contracture rates by eliminating skin contamination. One approach requires several assistants to hold retractors so that the implant can be inserted into the pocket without touching the skin (23). Others have adopted a no-touch approach that uses a sterile tube, a simple anoscope or a no-touch device carved out of a Toomey syringe acting as a sterile sleeve (24,25). Compared to other types of insertion devices, such as the Keller Funnel, it does not only facilitate the placement of the implant but also improves visibility during dissection and pocket fashioning (26). Finally, the cost of the Alexis device is relatively inexpensive.

According to the literature, the placement of drainage tubes is controversial in primary augmentation mammaplasty. The current trend is to avoid their placement (27,28). However, in the present study we decided to position drainage tubes in order to evaluate any difference in post-operative bleeding.

A possible bias in this study consists in the fact that the surgeon knew he was using the device. Moreover, it should be taken into account that the surgeons have possibly gotten better at using the retractor as the study progressed.

A disadvantage of using the Alexis device is the longer operative time (approximatively 15 minutes more than the traditional technique). This is explained by the time required to position the device and insert the prosthesis through a smaller incision as well as by the surgeons’ training in using the device. However, in our opinion a small increase in the mean operative time can be acceptable if this allows to obtaining a shorter and less evident final scar.

Although the inframammary approach to breast augmentation remains very popular, the length and visibility of its associated scar continue to be the main drawback of this technique.

The present study has investigated the use of a wound protector/retractor in breast augmentation with the aim of reducing the length of the usual incision.

This study has shown that the use of this device has proven useful in reducing the length of the inframammary incision. The resulting shorter scar is greatly appreciated both by patients and surgeons, as it is demonstrated by the results of the VAS. Interestingly, the increased visibility obtained with the use of the Alexis device allowed a better hemostasis, as suggested by the shorter drain duration and lower incidence of hematomas. Nevertheless, the low number of the studied cases does not give high significance to the differences observed in the two groups. More experience with this device should be gained; however, our experience suggests its usefulness.

Consistently with the data reported in the literature, also the infection rate is lower in the group of patients operated with the Alexis device. However, its use prolongs the operative time, for which we recommend surgeons to allow themselves some time to become familiar with the device. The current study has only examined the use of the Alexis wound protector/retractor with round textured implants. A further study investigating the use of this device with different types of breast implants would be very interesting.