Tuberculous cold abscess of breast: an unusual presentation in a male patient

Tuberculosis (TB) of breast is a rare disease with an incidence of 0.1% of all breast disease rising to 3% in endemic areas (1-3). The challenges in diagnosing breast TB are mainly the rarity and the unusual way of presentations. Mammary TB can be primary where there is no other focus identified or secondary. The primary focus could be in the lungs or lymph nodes. However, primary mammary TB is very rare and most of the time it is termed primary when attempts to identify the primary focus failed (4,5). Primary infection is through abrasions or through the ducts in the nipple (6). Secondary spread to the breast can be either through haematogenous route or through lymphatic route from contiguous structures most commonly a retrograde spread from axillary lymph nodes (7). Breast TB is more common in young women especially lactating women and incidence in lactating women can vary from 7–33% and is rare in men (1,8,9).

A 44-year-old male patient from Lithuania was admitted with progressive breathlessness with a diagnosis of bilateral pneumonia and treated with antibiotics. Initial work up included blood tests, chest X-ray and sputum culture. Initial chest X-ray showed several left lung lesions and miliary shadowing with pleural effusion and patchy consolidation (Figure 1). Polymerase chain reaction (PCR) test identified Mycobacterium TB. QuantiFERON®-TB Gold test was also positive. He was commenced on anti-tubercular chemotherapy (ATT) treatment with rifampicin, ethambutol, pyrazinamide and isoniazid. During the stay in hospital, he started developing neurological symptoms with seizures with deteriorating consciousness and was admitted to intensive care unit. Computed tomography (CT) scan of head was done and this showed mild hydrocephalus with small subarachnoid haemorrhage. Lumbar puncture was done and cerebrospinal fluid (CSF) was sent for culture. CSF showed raised lymphocytes but failed to yield acid fast bacilli (AFB). By this time, patient was already commenced on anti-tuberculous treatment. CT scan of chest was also done and this showed miliary shadowing in the lungs along with a large mass anteriorly on the chest wall on the left side (Figure 2). The chest wall mass was further assessed by a magnetic resonance imaging (MRI) scan and this showed a large fluid collection of 10 cm × 6 cm on the left side anterior to the muscle with multiple areas of enhancement and wall thickening (Figures 3,4). Patient was seen in the breast clinic and clinical examination did not reveal any skin changes of inflammation or sinuses. There was a soft fluctuant mass in the left breast of approximately 10 cm × 6 cm in size. He had bilateral mammogram and ultrasound scan of the left breast and axillary area. Mammogram showed a 10 cm mass in the left breast of benign nature (Figure 5). The ultrasound scan of left breast showed a large heterogeneous mass involving the whole breast with visible hyperechoic areas (Figure 6). Aspiration done and sample showed amorphous eosinophilic material within which there were degenerated nucleated cells. Considering the size of the abscess in the breast, it was unlikely to resolve without surgical intervention. Hence the abscess was drained surgically. Wall biopsy done during surgical drainage showed features of a cystic lesion filled with necrotic material. Wall was made of fibrous tissue with a lining of foamy macrophages (Figures 7-9). The staining for AFB and fungi were negative. With anti-tuberculous treatment patient gradually made a good recovery and the surgical drainage site did not have any complications such as persistent sinus formation. 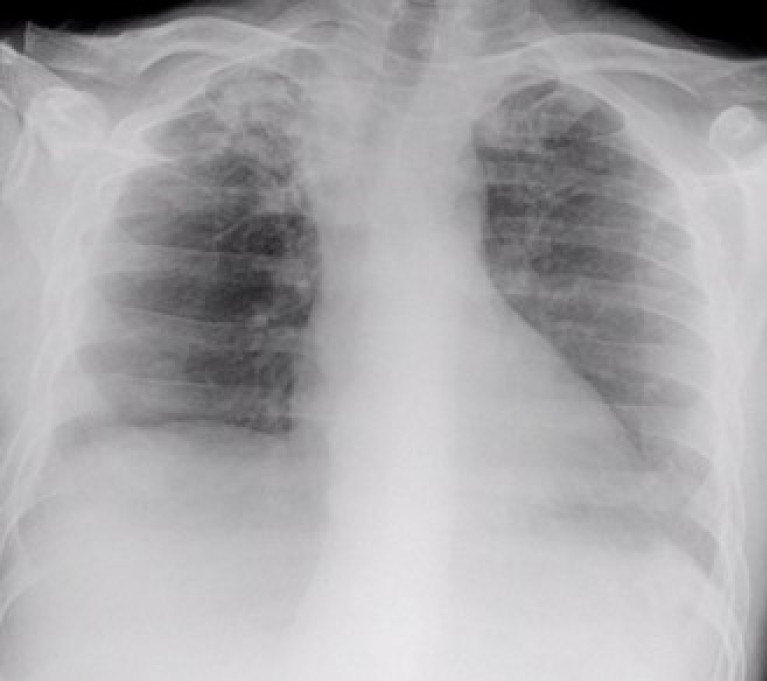 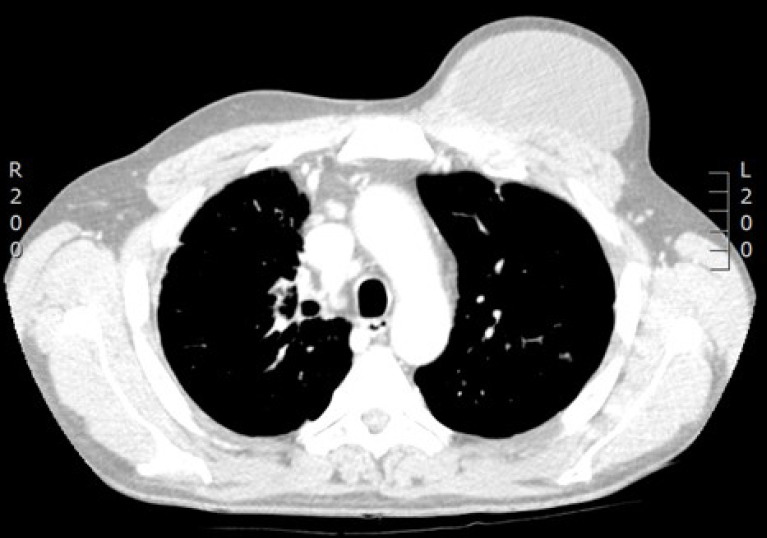 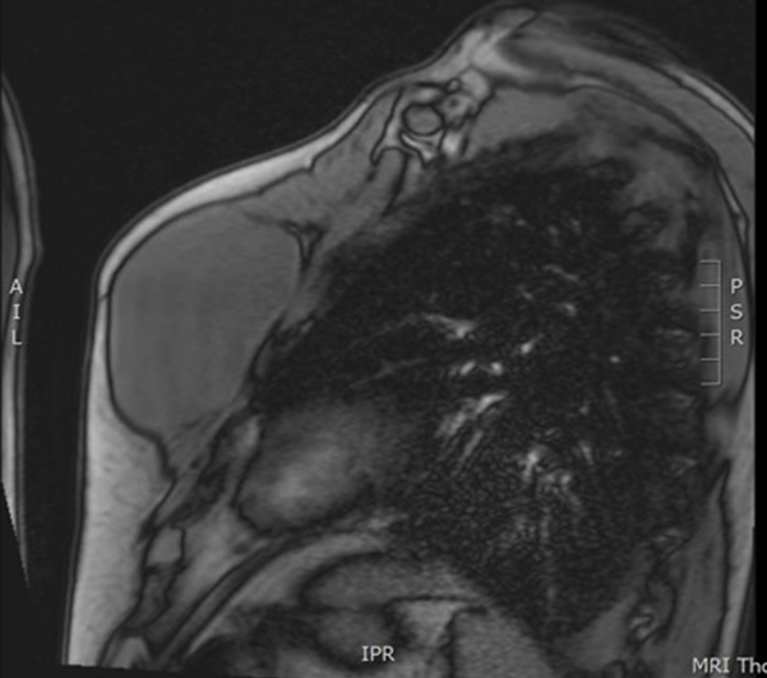 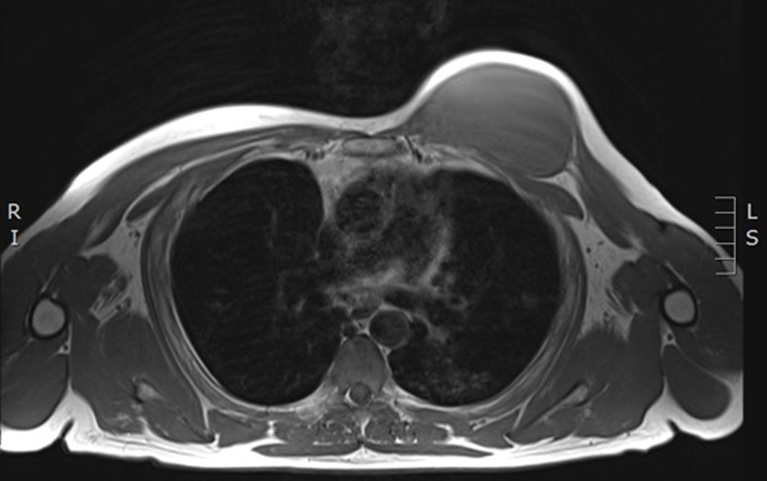 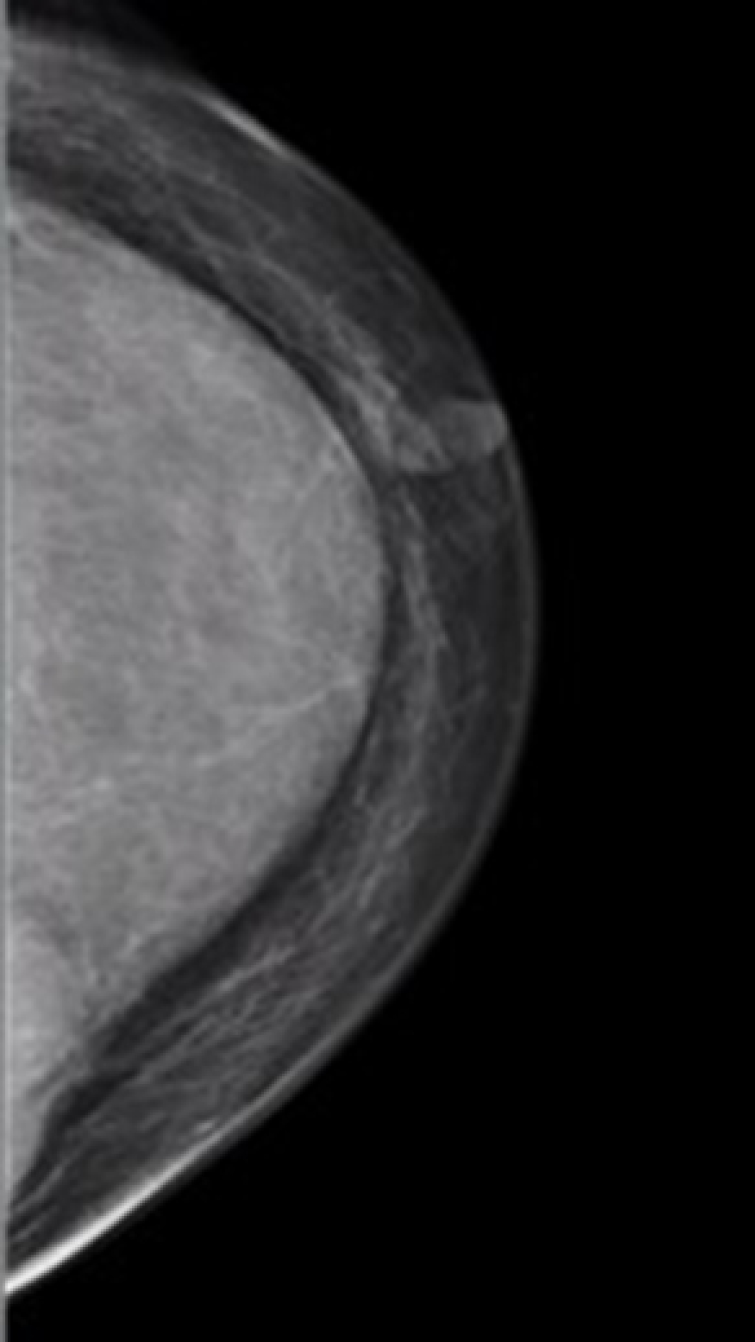 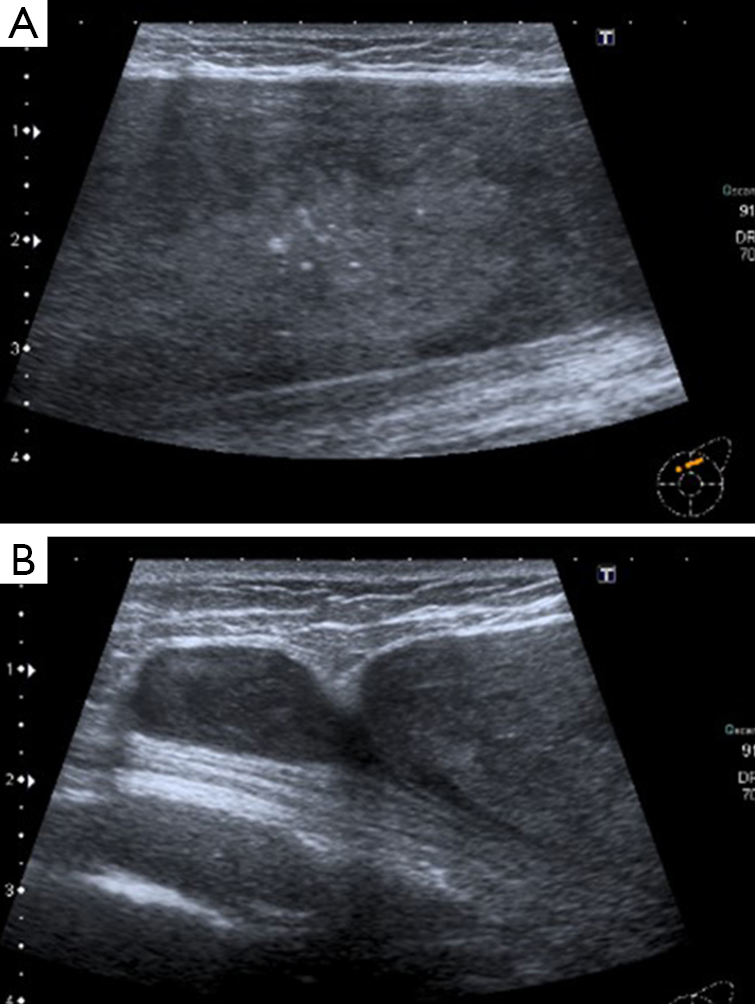 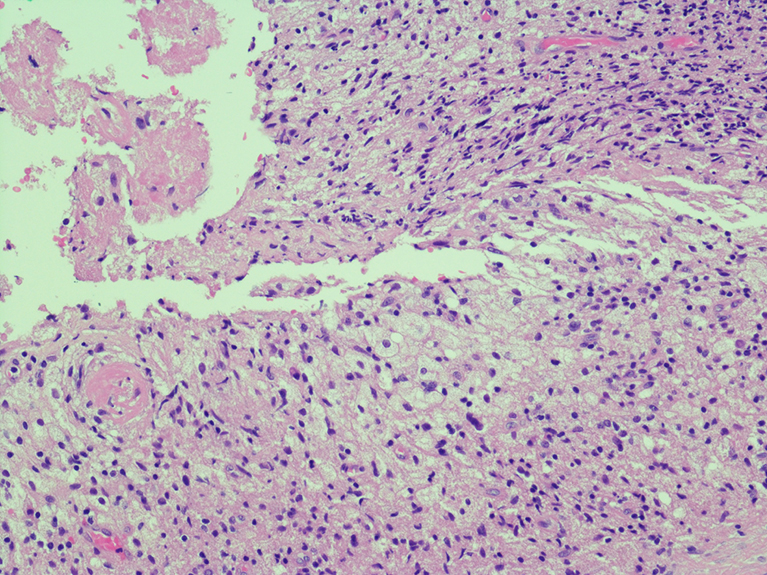 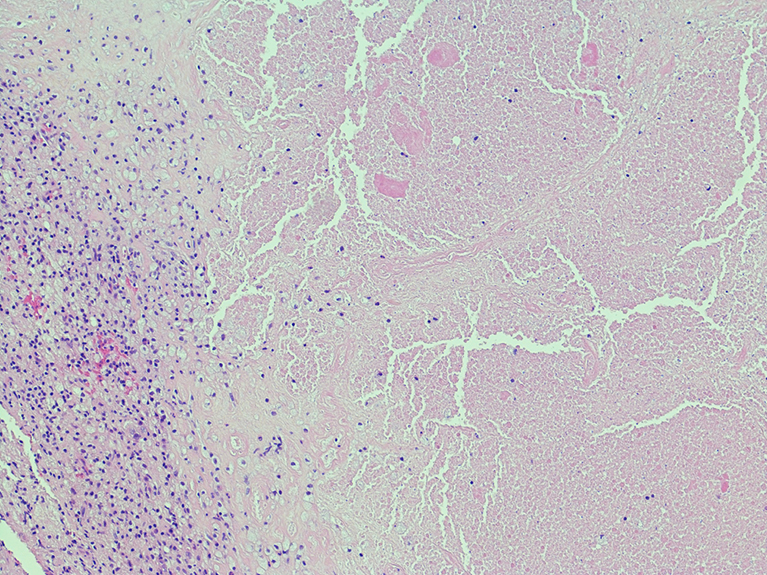 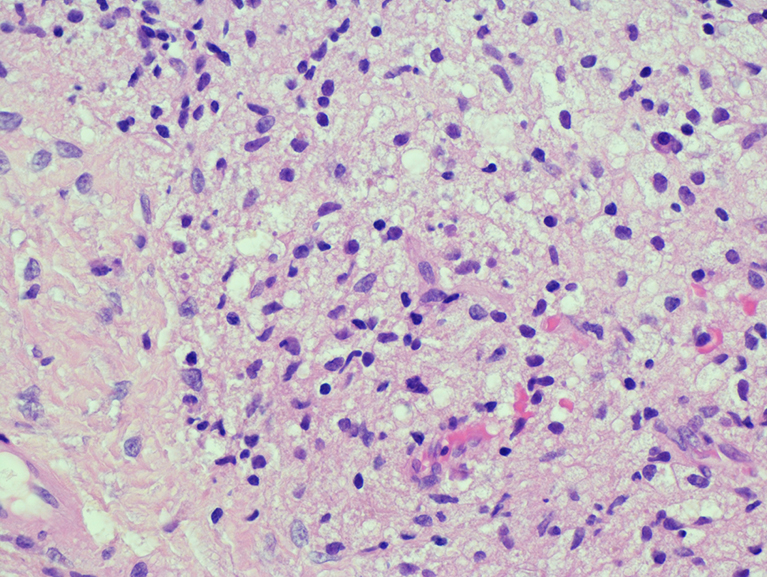 Even though TB is considered to be uncommon in the developed Western world, there is a steady increase in the incidence which could be attributed to migration of infected people from endemic areas and increasing number of patients who are immunocompromised with conditions such as acquired immune deficiency syndrome (AIDS) (6,10).

In general breast tissue is highly resistant to TB as it provides an infertile environment for survival and multiplication of tubercle bacilli (6,11). Mammary TB could be primary with no other identifiable focus in the body or secondary from another focus (12). Secondary spread to breast from lung can be through tracheobronchial, paratracheal, mediastinal lymph trunks and internal mammary nodes or retrograde spread from the axillary lymph nodes (12,13). Axillary lymph node enlargement is found in 50–75% cases (6). Other mode of spread is from contiguous structures such as infected rib, costochondral cartilage, sternum, and shoulder joint. Direct inoculation through skin abrasions is also possible. Another possible route of spread is haematogenous, however, breast tissue is usually resistant to this mode of spread even in immunocompromised patients (12). It has been observed that there is increased incidence of mammary TB in women of reproductive age especially in pregnant and lactating women (14). One of the explanation is that female breast undergoes frequent changes during this period and is more liable to trauma and infection (11). Breasts with increased vascularity and dilated ducts again predispose to tuberculous infection in pregnancy and lactation (8,9). TB of male breast is even rarer and constitute only 4% of cases (15).

TB of breast is classified into three different varieties: nodulocaseous tubercular mastitis, disseminated/confluent tubercular mastitis and tubercular abscess (1). The characteristics of nodulocaseous type involvement is slow growing painless mass which gradually involves skin with sinuses and ulcers. The differential diagnosis in the early stages could be benign lumps such as fibroadenoma and late stages it can mimic cancer. This is the most common pattern of tuberculous disease in breast (1,8,16). Second type is disseminated breast TB. This is characterised by multiple foci throughout the breast which caseates to form multiple sinuses. The last type is tuberculous abscess formation. In a series of 63 cases published by Mehta et al., the incidence of nodulocaseous form was 74.6%, tuberculous abscess was 12.6% and that of disseminated mastitis was 6.3% and in 6.3% of patients the only presenting symptom was nipple discharge (1).

Breast TB is often difficult to diagnose. When diagnosis is suspected, commonly chest X-ray helps to rule out lung lesions. Other imaging such as CT scan, MRI, mammography and ultrasound can all contribute valuable information in confirming the diagnosis and assessing the extent of the disease. However, none of these image findings are specific for TB (8,17,18).

Fine needle aspiration (FNAC) can be helpful and up to 73% cases with breast TB can be diagnosed with this technique (19). Culture of AFB remains gold standard for diagnosis of TB. However its usefulness is limited by the time required and frequent false negative results in paucibacillary specimens (20). The usefulness of Ziehl-Neelson staining or culture to identify AFB was not very high and was only 2% in a series of 38 patients published by Harris et al. (10) Similarly, series by Shinde et al. and Morsad et al. showed a 12% and 7% positivity respectively (8,21). It is important to highlight that a negative Ziehl-Neelson stain does not exclude the diagnosis of TB, and due to low-sensitivity, it is more likely to indicate a false-negative than rule out the diagnosis completely. Whereas a positive result would indicate the presence of mycobacterium TB infection in the tissue. Now a days gene amplification methods such as PCR is used more frequently for early results and PCR has positivity rate from 40–90% in diagnosing tuberculous lymphadenitis (22). However a false negative result is still a possibility. PCR results are available within 48 hours. Histopathology of specimen such as abscess wall biopsy can show epitheloid cell granulomas and caseous necrosis.

Mainstay of treatment for TB of breast is ATT. This is combined with surgical intervention as appropriate. In the series by Mehta et al., 75.43% of their patients needed surgical management along with anti-tuberculous treatment (1,23).

Our patient had features suggestive of tuberculous disease affecting lungs, meninges and it is highly likely that the breast involvement was secondary. In fact the breast pathology was an incidental finding identified on imaging. Breast abscess was cold and was not showing any acute inflammatory changes. It is likely the commencement ATT might have hindered the identification of AFB in breast abscess specimen as well as in the CSF. Our patient also needed surgical drainage as ATT alone would not have resolved such large abscess.

The diagnosis mammary TB needs high degree of suspicion and correlation of with other symptoms (10,24).

Even though there is resurgence of TB in the developed world, the incidence of TB of breast remains rare. It is important to differentiate this condition from other common breast pathology. The mainstay of treatment is ATT treatment. However, judicious use of surgical treatment is needed in appropriate cases.