The American College of Radiology (ACR) Breast Imaging Reporting and DataSystem (BI-RADS®) is an international consensus document developed by ACR. It covers three imaging modalities including mammography (MG), ultrasound (US), and magnetics resonance imaging (MRI), with an attempt to promote the standardized application of breast imaging in clinical diagnosis and treatment. In 1998, based on the practices and experiences of BIRADS MG, ACR established a Lesion Diagnosis Working Group, trying to reach consensus on morphology, dynamic enhancement, and parametric mapping and to conduct feasibility evaluation. The “dictionary” in the breast MRI report includes the minimum reporting standards on MRI scanningtechniques, lesion architecture, and region-ofinterest kinetic curve acquisition, in which the lexicon used for description and diagnosis is listed. After reviewing the efficacy of the morphology and kinetic curves in differentiating the malignancy of breast lesions, the group proposed the management principles for the corresponding lesions. From 1998 to 2002, the group reviewed these lexicon again and established ACR BI-RADS®–MRI Lexicon. The continuous efforts of ACR exert guiding role in the optimization of ACR BI-RADS®–MRI Lexicon.

The content of ACR BI-RADS®–MRI Lexicon include the definitions and atlas of various morphological features, the technical requirements of breast MRI, the description of kinetic curves, and the final classification and assessment (Figure 1). It is developed to provide uniform wording for the standard breast MRI report, help clinicians to understand MRI reports and select appropriate management modes, and facilitate the communication among different research and facilities. 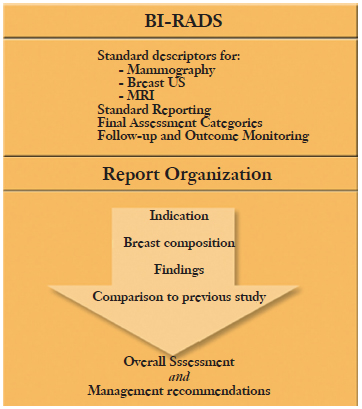 The lexicon is a basic index for breast MRI report and diagnostic description. When conducting breast MRI report discription, the basic lexicon that most meets the lesion features in the “discription” should be chosen in a logical sequence, and their meanings are basically consistent with those in the BI-RADS MG lexicon. Based on dynamic enhancement, ACR BI-RADS®–MRI Lexicon (Table 1) is especially feasible for lesions with abnormal enhancement. The lexicon recommends to carry out morphological assessment based on the images obtained at peak enhancement from high-spatial-resolution MRI (Figure 2). 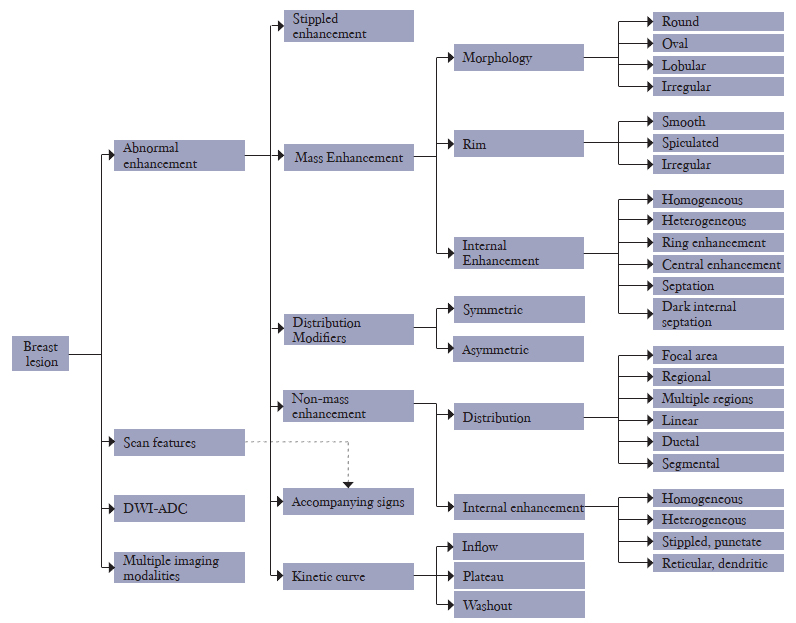 Notably, ACR BI-RADS MRI Lexicon can somehow be misleading or ambiguous, especially when it is translated into Chinese. The distinction between “punctuate enhancement” and “stippled enhancement” is confusing, and can be non-specific among different literature. Some literature list it as a third category after “Mass” and “Non- Mass-Like Enhancement (NMLE)”, and others regard it as a special type of NMLE. The descriptions of their imagining features are also not clear. Sometimes a same word is used for describing the different features of lesions. Particularly, the word “Irregular” is used for both the morphology and the rim of a mass, causing confusion between “irregular rim” and “irregular mass”. Therefore, it is recommended that the word “Irregular” should only be used for describing either morphology or rim, rather than both. For lesions that may be described using multiple terms, select the term that best describes the dominant lesion feature. The existence of multiple lesion features should be carefully managed because they usually can be malignant.

Technically, the description of a lesion needs the reconstruction/imaging from different views. For example, the linear NMLE refers to the “enhancement in a line that may not conform to aduct”; a linear enhancement at sagittal view may be shown as regional enhancement at axial or coronal view. Ductal enhancement refers to “enhancement in a line that may have branching, conforming to a duct”. The enhance can be smooth or irregular, and can be differentiated under high-resolution MRI. A segmental NMLE refers to the triangular region of enhancement, apex pointingto nipple, suggesting a duct or its branches. It is more common under thick-slice MRI. Under Highspatial- resolution thin-slice MRI, it may be shown as ductal enhancement; it may also be clumpedenhancement at the coronal plance verticle to the ducts. Unenhanced images may be applied to describe the lesions more accurately. For example, sometimes it is hard to distinguish “huge, irregular mass with heterogeneous enhancement” from “large, uneven regional enhancement”; in fact, both are used for describing large MRI enhancements. To facilitate distinction, a “mass” should have well-defined border with the surrounding breast tissues, whereas the border between a “regional enhancement” and its surrounding tissues is unclear, which can represents either lesions or normal structure, mainly depending on the internal features of the enhancement. “Stippled enhancement with a regional distribution” refers to the punctuate, mutually separated appearing enhancing foci, sand-like or dot-like, which is suggestive of the fibrocystic changes inside the breast tissue. Isolated fatty foci and non-enhanced breast tissue can be found among them. Observing the distribution features of the fat with non-enhanced T1WI may be helpful for the differentiation (Figure 3). 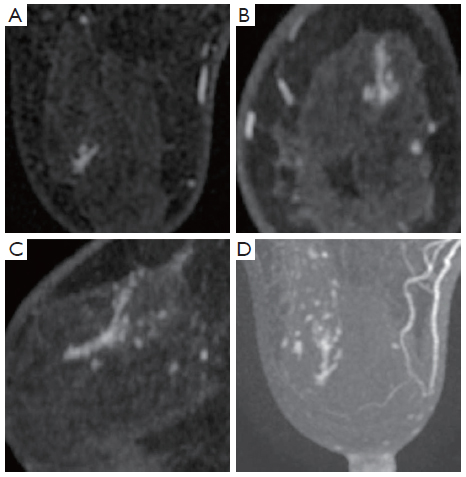 A mass is a three-dimensional lesion that occupies a space within the breast. It suppresses the fibroglandular tissue in the surrounding normal breast, and an individual mass lesion usually does not contain fat or normal gland tissues.

The description of a mass should include at least three morphological characteristics: (I) shape (II) margin (III) internal enhancement pattern (Figure 4). 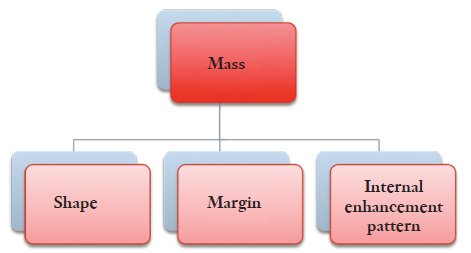 Figure 4 Morphological characteristics of a mass

The interpretation of the margin and morphology of the mass should be based on the findings during the first contrast-enhanced acquisition (Arterial Phase) to avoid the interference brought by washout and progressive enhancement of the surrounding breast tissue (Figure 5). 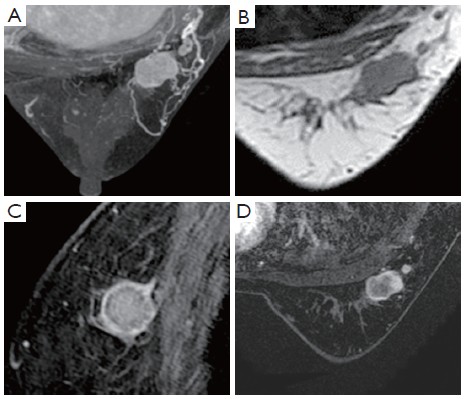 Figure 5 Mass features: The mass is a three-dimensional lesion that occupies a spacewithin the breast. It pushes the surrounding fat and glands, with well-defined margins. The mass exhibits a constant appearance on the MRI, without any fat or gland inside the lesion. The mass-like enhancement is described in terms of shape, margin, and internal enhancement. In this case, the mass is lobular-shaped and has smooth margin and rim enhancement. Pathology: Invasive ductal carcinoma

Shape of the mass

The 3D geometric features of a lesion can be divided into four types: Round, oval, lobular, and irregular (Figure 6).

Figure 6 Shape of the mass

Round and oval: The mass can be spherical (or ballshaped) or elliptical (or egg-shaped), which may be the morphological appearance of a mass on different crosssection. When the diameters of a mass in various directions are generally equal, it shows as round, otherwise as oval; they have no substantial difference in differentiating malignant or benign tumors. Therefore the authors name them collectively as “Oval” (Figure 7,8,9,10,11,12). 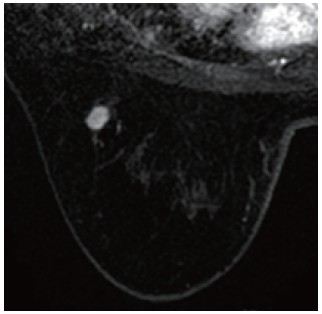 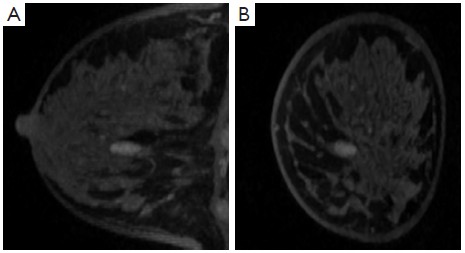 Figure 8 Oval mass: The mass is oval-shaped (on axial and coronal views) and has smooth margin and homogeneous internal enhancement. Pathology: Adenoma 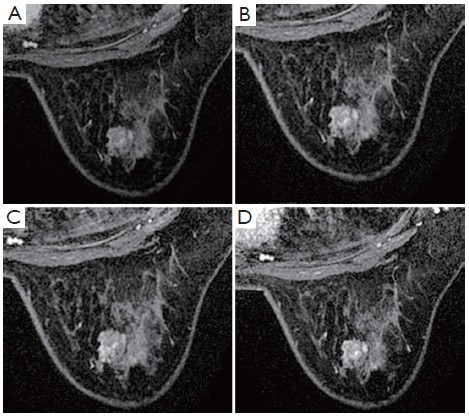 Figure 11 Round mass: The lesion has nearly same diameters in all directions. It has smooth margin and heterogeneous internal enhancement, which shows rim enhancement. Pathology: Invasive breast carcinoma 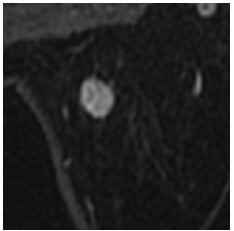 The lesion is interpreted based on both morphology and margin. If the margin is irregular or with spiculation, the shape can be listed as irregular.

Lobular: A mass that has a contour with deep or shallow undulations, whose convex is not completely outward; rather, it shows scallop-like or wavy appearance (Figure 13,14,15,16). 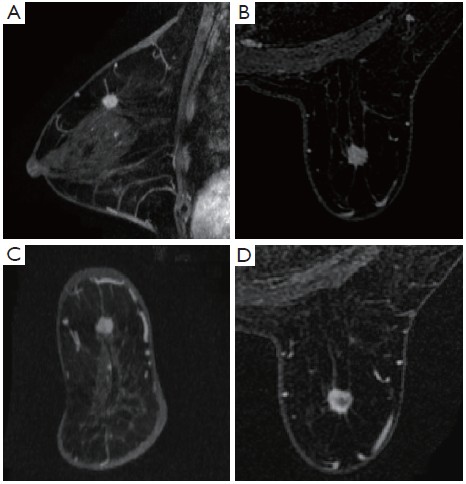 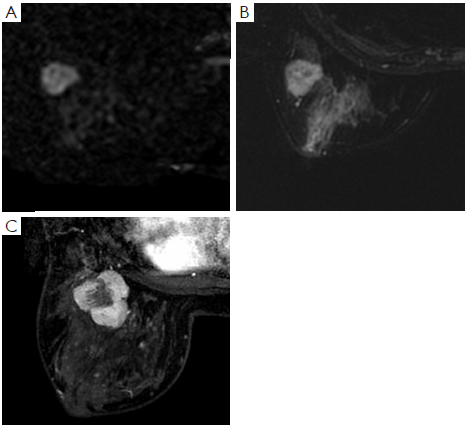 Irregular: The morphology of the lesion can not be described as oval or lobular, and can not be properly described using the exact morphological terminologies. An irregular mass should be distinguished from non-mass lesions. When a non-mass lesion is relatively large, a similar visual mass effect may appear; or, a oval mass-like structure (e.g., clumped enhancement) may occur inside it. According to the authors' experiences, an “irregular” lesion is featured by the absence of fat signal inside the lesion (Figure 17,18,19,20,21). 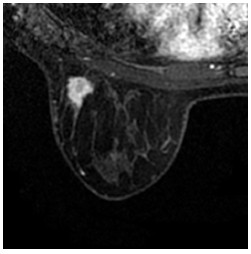 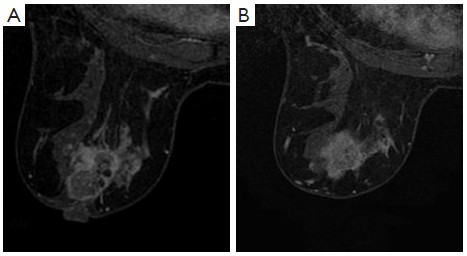 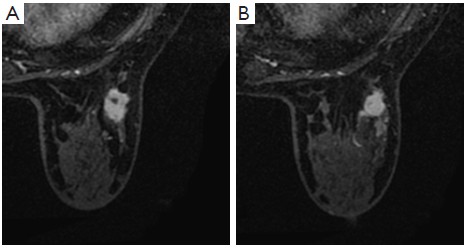 Figure 19 Irregular-shaped mass: The mass has a shape that is neither round nor oval; furthermore, it is not lobular. Therefore it is classified as irregular. Although another dimension of the lesion is close to round, the lesion is predominantly classified as “irregular”. It has spiculated margin and homogeneous internal enhancement. Pathology: Invasive breast carcinoma 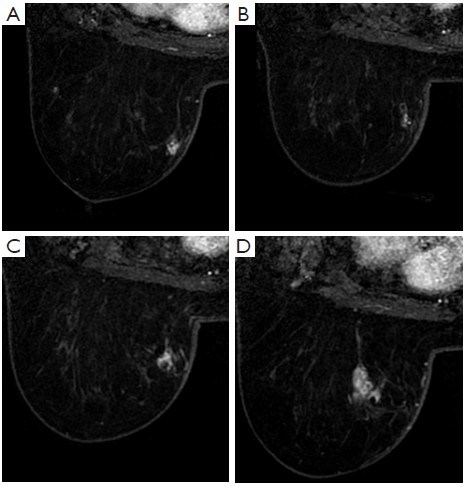 Margin of a mass

The margin of a lesion and its relationship with the surrounding tissues (rather than the morphology of the lesion) is emphasized. Similar to mammography, the characteristics of the margin of a mass in MRI is important for the differentiation of malignant and benign tumors. It includes three types: Smooth, spiculated and irregular (Figure 22,23,24,25,26,27,28,29,30,31,32,33).

Figure 22 The characteristics of the margin of a mass 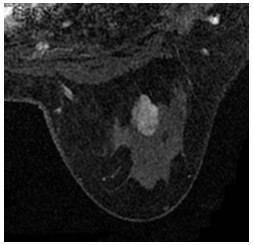 Figure 23 Smooth margin: The lesion is lobular-shaped and has smooth margin and heterogeneous internal enhancement. No spiculation is observed. Pathology: Adenoma

Figure 24 Smooth margin: Lobular adenoma with smooth margin and heterogeneous internal enhancement. Pathology: Sclerosing adenosis accompanied with adenoma formation. The tumor is sized 3 cm × 2 cm × 2 cm, with some of its glands becoming cancerous, which is interpreted as low-grade intraductal cancer and lobular carcinoma 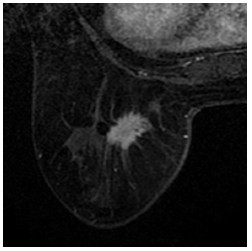 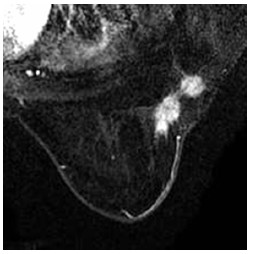 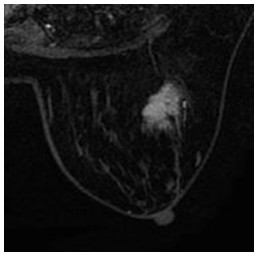 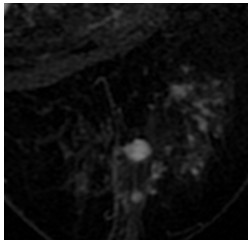 Figure 29 Irregular margin: The lesion is round-shaped, with equal diameters in all directions. Its margin is not smooth, but also does not form spur sign, which is therefore interpreted as “irregular”. It has heterogeneous internal enhancement. Pathology: Fiber adenosis accompanied with epithelial ductal hyperplasia with a cribriform pattern

Figure 30 Irregular margin: The lesion has a shape of neither oval nor lobular and a margin of neither smooth nor spiculated. Therefore, it is interpreted as “irregular” in terms of both shape and margin. Pathology: Invasive ductal carcinoma 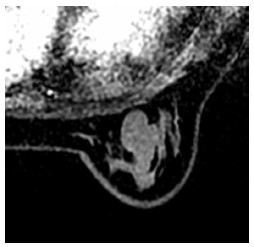 Figure 32 Smooth margin: This is a lobular mass without enhancement during arterial phase. Pathology: Fibroadenoma 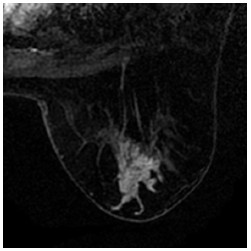 Figure 33 Irregular mass: Both the shape and margin is irregular. Pathology: Intraductal carcinoma
Smooth: A benign lesion usually has clear and smooth margin, which is well defined with the surrounding breast tissues. Nevertheless, not all lesions with smooth margin are begin; in fact, some malignant tumors can also have smooth margin. Spiculated: Characterized by radiating lines. Irregular: Uneven margin can be round or jagged (not smooth or spiculated). Genarally, masses with spiculated and irregular margin usually are malignant, whereas those with smooth margin are mostly benign. There are exceptions, though. Similar to mammography, some early breast cancer with small foci can presents benign appearance even under high-resolution MRI. The spacial resolution is extremely important in displaying the features of a mass margin, since the spiculae in some masses will not be displayed under lowresolution MRI.

Internal enhancement pattern of a mass 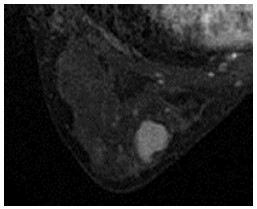 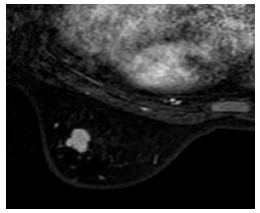 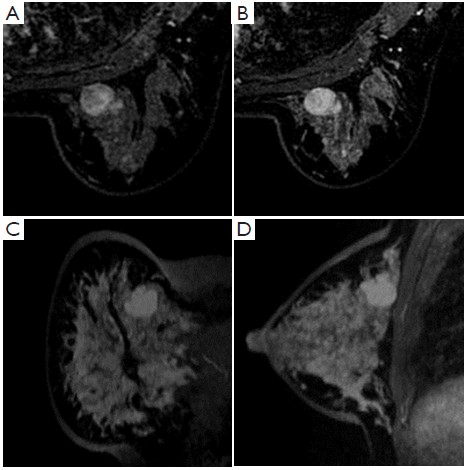 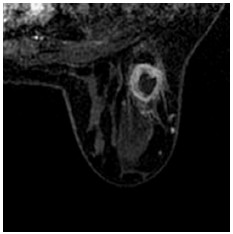 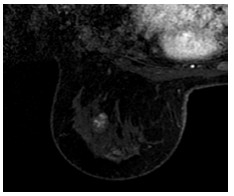 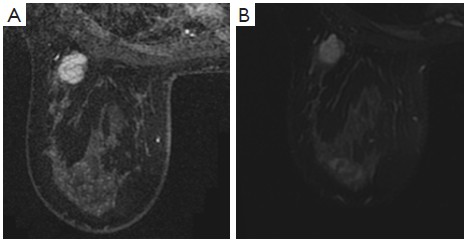 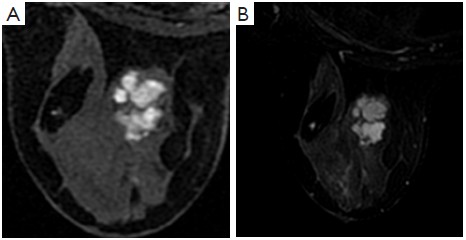 Figure 47 Septation-like enhancement: A mass in the upper outer quadrant of the right breast shows mildly lobular enhancement during the early arterial phase and solid enhancement in the delayed phase. Pathology: Mucinous adenocarcinoma 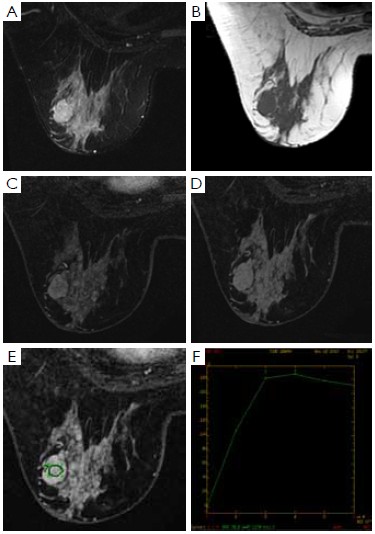 Heterogeneous enhancement is nonuniform and unevenly-distributed enhancement, which varies at different spatial locations.