A single-center retrospective analysis of childhood hepatoblastoma in China

Therefore, considering the scarcity of studies in China, this study aimed to describe the epidemiological characteristics and analyze the influencing factors of survival among children with HB in mainland China, which would provide some evidence for the improvement of prognosis for children with HB. We present the following article in accordance with the STROBE reporting checklist (available at http://dx.doi.org/10.21037/gs-20-710).

The Ethics Committee approved the study protocol of the Shanghai Jiao Tong University School of Medicine. The written informed consent of all enrolled patients or their parents was obtained. Patient anonymity was guaranteed to be preserved. The study was conducted in accordance with the Declaration of Helsinki (as revised in 2013).

The diagnosis was on clinical manifestations, laboratory examinations, and pathological examinations. Patients were treated with hepatectomy, liver transplantation, or without surgery on their conditions. Most of the patients not undergoing surgery were hospitalized for biopsy and clinical evaluations and did not experience further surgical treatment.

The last follow-up date was December 31, 2019. Follow-ups were conducted after patients discharged from the hospital. Overall survival (OS) was estimated as time (in days) from diagnosis to death of any cause. Patients not experiencing an event were censored from the last contact.

Two researchers entered all the data simultaneously. Data collection and analysis were performed using SPSS 18.0 (Statistical Package for the Social Science, SPSS Inc., Chicago, IL, USA). Descriptive analysis was used to describe the demographic and disease characteristics. Then, the continuous variables were described as mean ± SEM. Categorical variables are described by number and percentage. Survival time, survival rates, and survival curves were estimated by the Kaplan-Meier method. A log-rank test was used in the univariate analysis. Variables statistically significant in the univariate analysis, and variables with professional meanings on previous publications, were included in the Cox proportional hazards model. All tests were two-way, and P<0.05 was considered statistically significant. 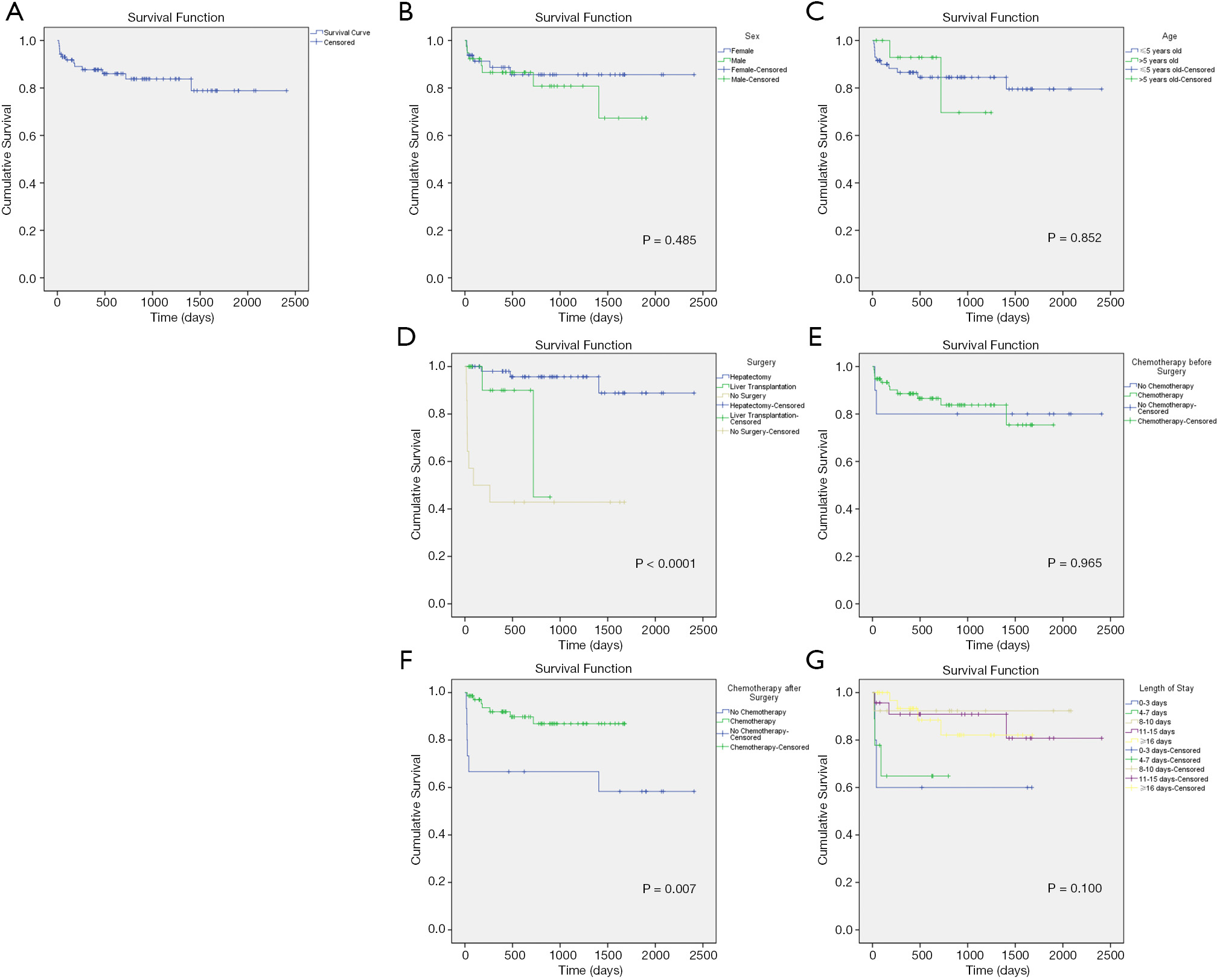 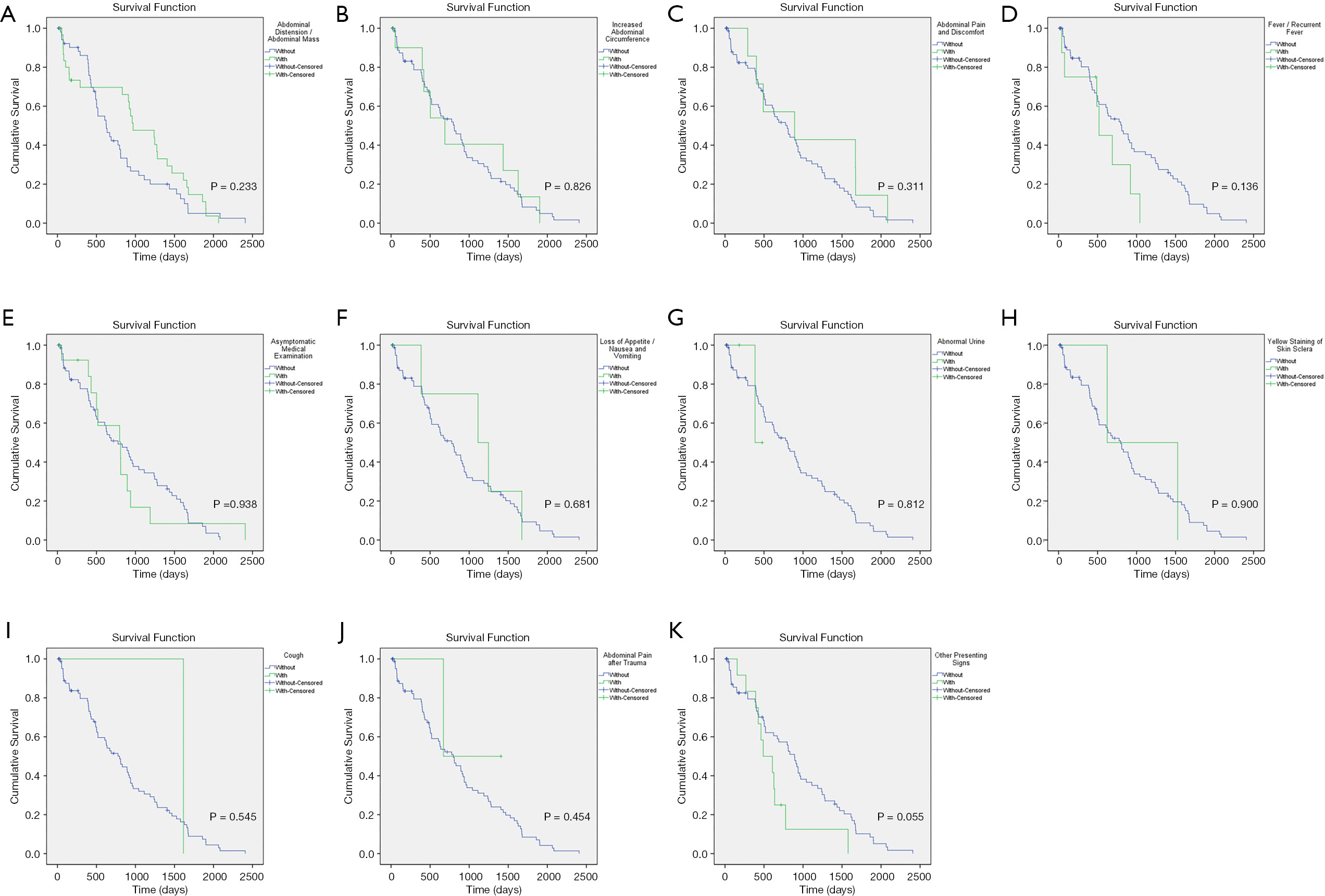 Factors with statistical significance in the univariate analysis were included in the Cox proportional hazard model. Sex was chosen on existing studies (15). The multivariate analysis suggested that undergoing surgery and sex were independent prognostic factors of childhood HB (Table 3, P<0.05). Undergoing hepatectomy (HR: 0.039, Figure 3A) or liver transplantation (HR: 0.142, Figure 3A) was associated with a better prognosis, while boys were associated with a poorer prognosis (HR: 3.614, Figure 3B). 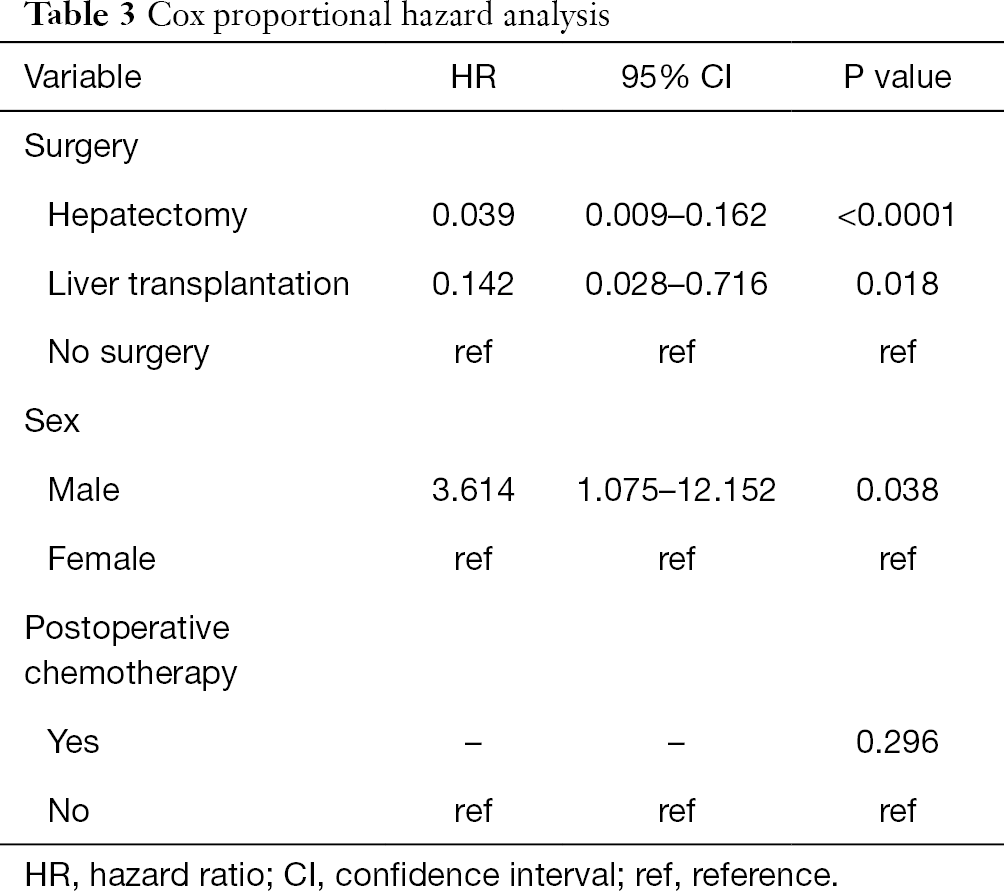 Comparison of the medical expenses of different surgical approaches

Also, although international studies showed that male children were more sensitive to HB, there was no evidence verifying the influence of sex on survival (17,50). However, considering a Chinese study suggested that a male was an individual factor contributing to poorer prognosis (15), sex was included in the multivariate analysis even though it was not statistically significant in the univariate analysis. Like this previous publication in China, our study showed that sex was an influencing factor of prognosis, and boys had a poorer prognosis than girls. On this finding, it is necessary to explore further the relationship between sex and prognosis of childhood HB. The differences among various countries and regions should be further considered.

Almost no studies ever reported medical expenses of childhood HB. However, it should be noted that the economic burden is always a significant obstacle for patients to receive effective therapy (51), and there is no exception for children with HB (15). This study showed that the most expensive therapy was liver transplantation (99,633.9 CNY), followed by hepatectomy (40,217.5 CNY) and no surgery (8,270.7 CNY). Compared with the real GDP per capita of 70,892 CNY, the per capita disposable income for urban residents of 42,359 CNY, and the per capita disposable income for rural residents of 16,021 CNY in China in 2019, it posed an economic burden for Chinese families with children suffering from HB. Therefore, it should be given severe considerations when accelerating the survival of children with HB. Further cost-effectiveness analysis on diagnosis and treatment is worth being done (52), which will provide more evidence for the government to invest more on child health and encourage children with HB to receive more effective therapies.

Although a retrospective analysis is suitable for rare diseases with advantages of time- and cost-saving, there are some biases affecting the results, especially selection bias. To avoid Berkson bias as much as possible, this study includes all children with HB meeting the inclusion and exclusion criteria treated in Renji Hospital from 2013 to 2019. Their survival and death information are tried to be extracted from medical records to avoid McNeyman bias and non-response bias. However, this retrospective study has several limitations. First, because of the accessibility of data, some traditional key clinical characteristics, histology, pathology, and staging were not included in this study, including AFP level at diagnosis, histopathology, PRETEXT stage, and metastasis. Second, this is a single-center study with small samples, and the representativeness is limited. Third, it is a short-term follow-up study, and many participants were censored because they are still alive at the last follow-up. Fourth, considering the economic burden of different surgical therapies, only the average medical expenses were presented and compared rather than a more comprehensive analysis combined with health utilities. Fifth, considering the characteristics of a retrospective study that it is impossible to analyze the causal relationship, the imaging features and pathogenesis of HB was not explored in this study. Therefore, further study, including more factors and participants from various institutions, needs to be designed into a prospective research to verify the results. And a cost-effectiveness analysis should be considered in the next step.

In conclusion, this study showed that surgical therapy could bring a better prognosis, and girls had excellent opportunities for survival. Although some of these study findings have been reported previously, this study could provide some significant evidence nationwide, especially some conflicting factors and from the aspect of economic burden.

Reporting Checklist: The authors have completed the STROBE reporting checklist. Available at http://dx.doi.org/10.21037/gs-20-710

Conflicts of Interest: All authors have completed the ICMJE uniform disclosure form (available at http://dx.doi.org/10.21037/gs-20-710). The authors have no conflicts of interest to declare.

Ethical Statement: The authors are accountable for all aspects of the work in ensuring that questions related to the accuracy or integrity of any part of the work are appropriately investigated and resolved. The Ethics Committee approved the study protocol of the Shanghai Jiao Tong University School of Medicine. The written informed consent of all enrolled patients or their parents was obtained. Patient anonymity was guaranteed to be preserved. The study was conducted in accordance with the Declaration of Helsinki (as revised in 2013).