Abnormality of thyroid tissue during embryogenesis, along the passage of thyroglossal duct (from the ﬂoor of the primitive foregut to its ﬁnal location), can cause ectopic thyroid tissue in the neck. Most of the cases are asymptomatic, and symptoms can be caused by tumor size and its relationship with surrounding tissues (1). Diseases affecting the thyroid may also affect the ectopic thyroid. The occurrence of ectopic thyroid tissue is unknown due to unrecognized cases that are often asymptomatic. As mentioned, most of the ectopic thyroid cases are detected in sublingual position along the descending pathway of thyroglossal duct. It is difficult to understand how ectopic thyroid tissue may occur in the thoracic cavity, duodenum, gallbladder, pancreas, ovaries and adrenals (2-7). Extremely rare cases of ectopic thyroid tissue in the adrenal were described before in 14 patients to the best of our knowledge (8-19). The frequency of incidental adrenal tumors on computed tomography (CT) scans is approximately 0.4–4.4%, and in autopsy series incidence of 8.7% has been reported (20). We present the following article in accordance with the CARE reporting checklist (available at http://dx.doi.org/10.21037/gs-20-471).

A 29-year-old female was admitted to our clinic for the operation of left adrenal incidentaloma discovered on MRI in October 2019. She was evaluated by her endocrinologist because of irregular menstrual cycle for few months. She had no positive family history for tumor, genetic history and psychosocial history. She reported no back pain. Physical examination showed no organomegaly in the abdomen. Ultrasound of abdomen was indicated which revealed cystic mass on the left adrenal. Soon after magnetic resonance imaging (MRI) was performed which showed 24 mm × 25 mm × 28 mm big lesion, hypointense on T1w and isointense on T2w in left adrenal (Figures 1,2). The patient had normal adrenal function, her cortisol level was 192 nmol/L, adrenaline was 4.6 µg/24 h, and dopamine was 349 µg/24 h. 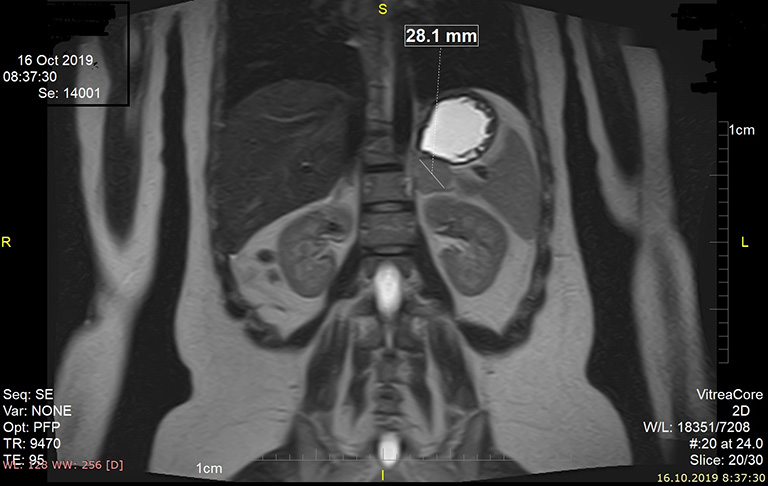 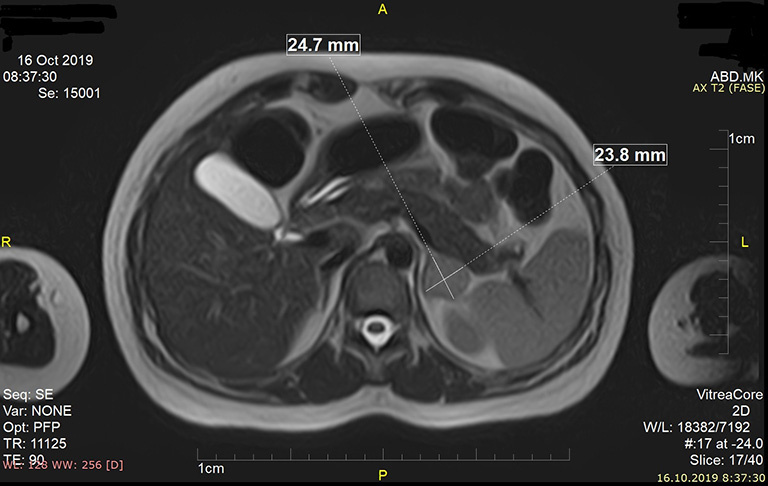 Operation was indicated due to patient’s age and the size of lesion. Left laparoscopic adrenalectomy was performed on the 24th of October 2019. Postoperative course was uneventful, and patient was discharged from clinic second day after surgery. Two weeks after surgery pathohistological finding revealed left adrenal gland which dimensions were 40 mm × 20 mm × 4 mm, mass 6.5 g, containing cystic tumor with maximal diameter of 15 mm.

Adrenal gland tissue containing cystic formation with wall composed mostly of one layered cuboidal epithelium under which proliferate follicles composed of cuboidal cells enclosing pink proteinaceous material. The previously described finding was completely consisted of thyroid tissue composed of normal follicles fulfilled with inactive colloid. Follicular cells express TTF-1, Thyroglobulin, PAX8, and cytokeratin 7, and lack expression of calretinin (Figure 3). As soon as we got pathohistological finding we decided to perform ultrasound (US) of the neck. US revealed normal thyroid without any nodes, thyroid hormones levels were within physiological range (FT4-11.54 mmol/L, TSH-2.16 mmol/L). Thyroglobulin was 18 mg/L. Six months after operation laboratory studies and US showed normal thyroid status. A timeline of our case show the whole medical procedure (Figure 4). All procedures performed in this study involving human participants were in accordance with the ethical standards of the institutional committee, and with the Helsinki Declaration (as revised in 2013). Written informed consent was obtained from the patient for publication for this case report and any accompanying images. Local institutional Ethical Committee approved the study by decision No. 1575/7. A copy of the written consent was provided for review to the Editor-in-Chief of this journal. 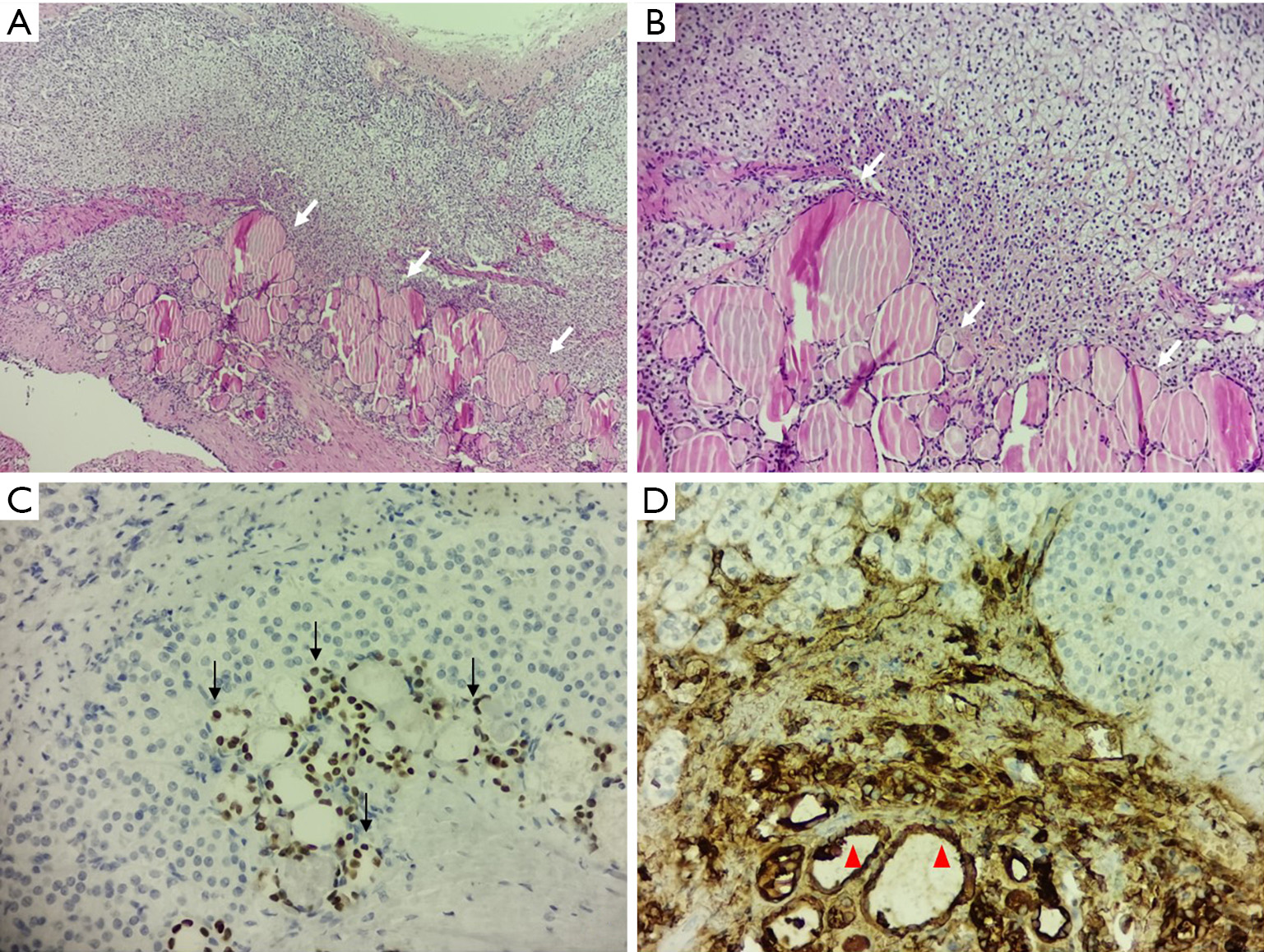 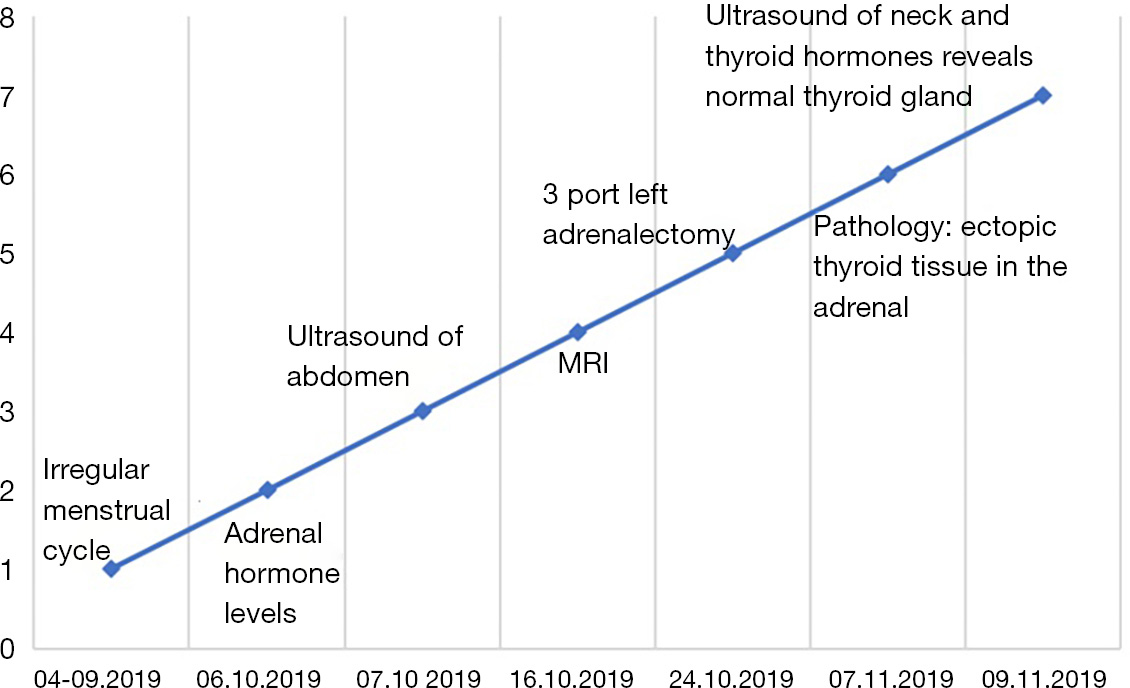 Figure 4 Important date and times in our case.

To the best of our knowledge this is 13th case report on this topic, and 15 patients were presented including ours (Table 1). Patients were mostly women (14:1). The median age was 49.86 years, ranging from 29 to 67 years old. Our patient was the youngest, and she was only 29 years old at the time of the operation. Most of adrenal lesions were incidentally discovered by CT or MRI, some of those (three out of thirteen) were discovered during preoperative diagnostic of other organ pathology. Some patients had discomfort or pain in the back (15,17,19). In three patients preoperatively hyperaldosteronism was detected (13,14,15). Size of tumor ranged from 8 to 80 mm. In all cases cystic degeneration either on CT/MRI images either on gross pathology examination was seen. Only two papers presented case series of two patients (9,14). 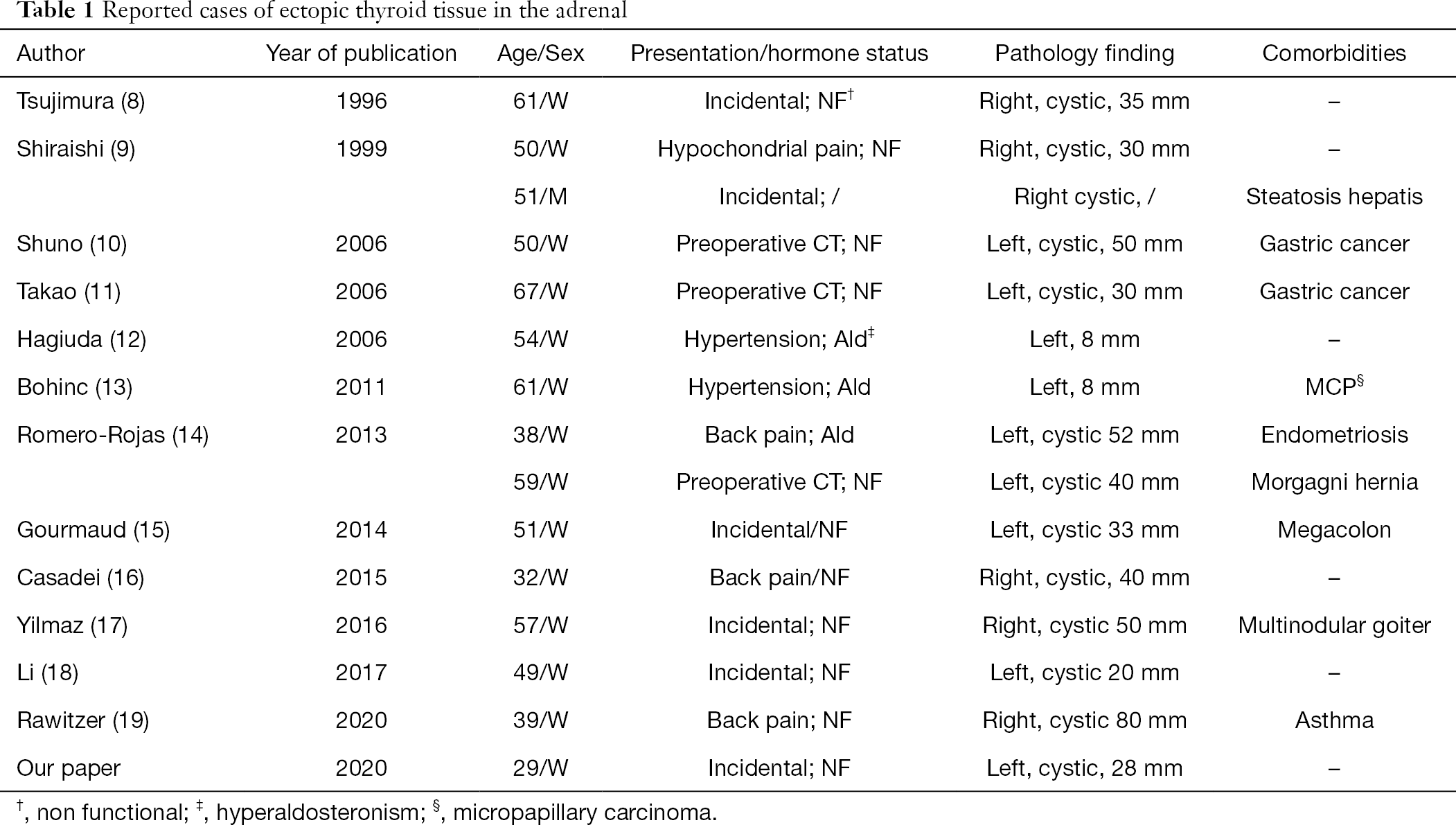 The most important thing is to exclude metastasis from thyroid carcinoma. Thyroid function and ultrasound of neck revealed normal thyroid function in our patient. Thyroidectomy was performed in one case because of 5 mm, micropapillary carcinoma. Pathohistological examination and immunophenotype analysis findings of both micropapillary carcinoma and thyroid tissue in the adrenal gland didn’t prove the existence of metastasis in that case (13). In one of the patients near subtotal lobectomy of both sides was done, because of multinodular goiter, 32 years before adrenal surgery. In residual thyroid tissue new nodules arose, but FNA was benign (17). In rest of the cases both hormone levels and thyroid visualization (US, CT) showed no thyroid disfunction. In case of suspicious nodules in thyroid gland (US or by fine needle aspiration biopsy) total thyroidectomy is recommended, and it should be followed up by radioiodine therapy (for ablation of lymph node metastases).

Pathological finding showed benign features in all cases including ours. Thyroglobulin (Tg) and thyroid transcription factor (TTF-1) immunostaining can confirm thyroid differentiation, and Galectin-3 and HBME-1, may point towards malignancy. Testing for BRAF V600E mutation may be of prognostic value. Even though it is high specific for papillary carcinoma, this BRAF mutation is absent in the follicular type of papillary cancer (22). In all reports immunohistochemical finding was positive for Tg, TTF1 was determined and positive in five of cases (8-18). Romero-Rojas et al. and Gourmaud et al. reported that galectin3 and HBME1 were focally positive in the cyst-lining cells, but were negative in the follicles (14,15). Using real time-polymerase chain reaction (RT-PCR) Romero-Rojas et al. didn’t identify mutations in BRAF and KRAS genes in adrenal and in thyroid tissue from both of their patients (14). Casadei et al. proved no BRAF (exon 15), N-RAS (exon 3), H-RAS (exon 3), and K-RAS (exon 2 and exon 3) genes mutations, which excluded thyroid malignancy (16).

In conclusion, ectopic thyroid tissue in adrenal gland is a rare pathological finding. It almost always has the form of a cystic lesion that is distinctive enough to be noticed both macroscopically and histologically. The most important thing is to distinguish metastatic thyroid cancer of ETTAG in order to avoid an unnecessary thyroidectomy. Improvements in imaging studies and their interpretation have increased over the past few years, and now when these methods are widely used we can expect higher numbers of incidentalomas, and maybe a greater number of ETTAG. Since ectopic thyroid tissue in the adrenal is a very rare finding, and that our patient had only 29 years at the time of the operation, clinicians should consider this as one possibility of differential diagnosis when incidentaloma presents as a cyst with normal hormonal status.

Reporting Checklist: The authors have completed the CARE reporting checklist. Available at http://dx.doi.org/10.21037/gs-20-471

Conflicts of Interest: All authors have completed the ICMJE uniform disclosure form (available at http://dx.doi.org/10.21037/gs-20-471). The authors have no conflicts of interest to declare.

Ethical Statement: The authors are accountable for all aspects of the work in ensuring that questions related to the accuracy or integrity of any part of the work are appropriately investigated and resolved. All procedures performed in this study involving human participants were in accordance with the ethical standards of the institutional committee, and with the Helsinki Declaration (as revised in 2013). Written informed consent was obtained from the patient for publication for this case report and any accompanying images. Local institutional Ethical Committee approved the study by decision No. 1575/7. A copy of the written consent was provided for review to the Editor-in-Chief of this journal.