After the first radical mastectomy was performed by Halsted in 1882 (1), extirpative procedures for breast cancer have evolved toward less radical resection while maintaining maximum survival. Modified radical mastectomy, which preserves the pectoralis muscles, was first reported by Patey and Dyson in 1948 (2) and became the standard breast cancer operation based on the evidence of equivalent oncologic outcomes (3,4). Currently, skin-sparing mastectomy (5,6), which was gradually introduced in the 1990s for immediate breast reconstruction (7), and the more conservative nipple-sparing mastectomy are widely performed on the basis of the evidence of their oncologic and surgical safety as well as their superior cosmetic outcomes (8,9). The incidence of breast reconstruction surgery after mastectomy has increased due to advances in the field, with two-stage tissue expander/implant reconstruction being the most common reconstruction method currently used (10).

A decrease in skin flap thickness was demonstrated to be associated with postoperative complications after mastectomy (19-23). Among the combinations of reconstruction methods and contralateral matching procedures, both procedures of the implant-based reconstruction and contralateral augmentation combination have the potential to lead to deterioration of the thickness and circulation of the mastectomy skin flap. Consequently, postoperative complications to increase. In implant-based reconstruction, the skin envelope used to cover the implant is usually limited to the remnant skin flap left from the mastectomy. It is thus difficult to supply a sufficient skin envelope from adjacent or remote soft tissue in such cases, unlike in an autologous reconstruction. In addition, in patients undergoing contralateral augmentation, the demand for a skin envelope to cover a reconstructed breast mound that is larger than the original breast is increased. We thus hypothesized that the potential lack of a sufficient skin envelope for the reconstructed breast, in combination with the inflation of the tissue expander to reach the size of the contralateral breast (which is indicated for contralateral augmentation), may be associated with postoperative complications of the reconstructed breast. We present the following article in accordance with the STROBE reporting checklist (available at http://dx.doi.org/10.21037/gs-20-509).

Prospectively recorded data from consecutive patients who underwent mastectomy followed by tissue expander/implant breast reconstruction at our institution between February 2010 and April 2018 were retrospectively reviewed. This study was approved by the Institutional Review Board of Samsung Medical Center (IRB No.: 2020-01-094), and was performed in accordance with the principles of the Declaration of Helsinki (as revised in 2013). The requirement of obtaining individual consent was waived for this retrospective analysis. We included all patients who underwent the exchange of the expander to the permanent implant as the second stage of a unilateral tissue expander/implant breast reconstruction and were followed up at least 6 months postoperatively. Patients who had a contralateral reduction mammoplasty simultaneously with the unilateral breast reconstruction or had a previous breast procedure, including augmentation or reduction mammoplasty, were excluded from this study. Patients who had delayed reconstruction were also excluded because the amount and characteristics of a remnant mastectomy skin flap are different than those seen in an immediate reconstruction. The final cohort consisted of 751 patients (Figure 1). Reconstructions were performed by one of the four senior surgeons (BJJ, JKP, GHM, and SIB). 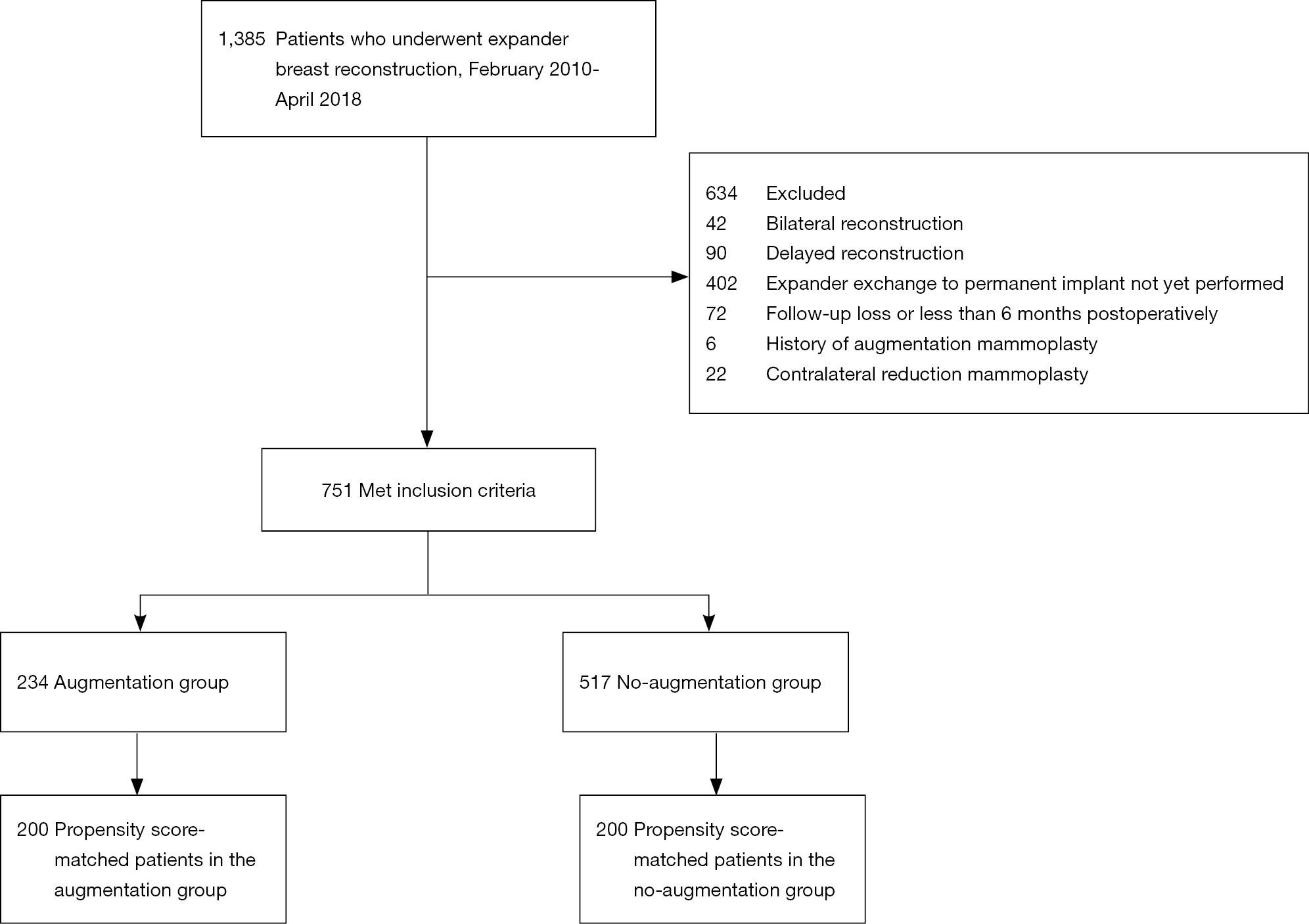 After mastectomy, a tissue expander was placed in the sub-pectoral space. The tissue expander was chosen based on breast width, height, and mastectomy weight. For patients who wanted contralateral augmentation, an expander with a width larger than that of the original breast was chosen. Use of an acellular dermal matrix (ADM) was determined based on the following: the attending surgeons’ decision, a need for infero-lateral implant coverage, and a thorough discussion with patients considering their desire and financial burden. Inflation of the expander was started four weeks postoperatively, and an average of 100 mL of saline (30–150 mL) was injected at each visit every three to four weeks at an outpatient clinic. The exchange of the expander with a permanent implant was usually performed six months after placement of the expander. All of the contralateral augmentation procedures included in this study were performed simultaneously with the exchange of the expander with a permanent implant. For contralateral augmentation, inframammary incisions were used, and the implant was inserted in the sub-pectoral spaces. The implant size of the augmentation side was decided before surgery based on patients’ desire and clinical examination of the mastectomy skin flap by the attending surgeons.

Patients were divided into two cohorts, augmentation and no-augmentation, depending on whether contralateral augmentation mammoplasty was performed simultaneously with the two-stage reconstruction. The clinical and surgical variables of the second stage of the operation, i.e., implant placement, that were retrieved included age, body mass index (BMI), smoking history, medical comorbidities (diabetes and hypertension), history of radiotherapy and chemotherapy, implant type and size, and operating surgeon. History of chemotherapy was defined as previously undergoing neoadjuvant and/or adjuvant chemotherapy. History of radiotherapy was defined as undergoing radiotherapy before or after the mastectomy and before the second stage of reconstruction. Operative variables of the first stage of the operation, i.e., tissue expander placement, including mastectomy type (skin- or nipple-sparing), mastectomy weight, ADM use, and tissue expander size, were also analyzed.

Patients in the two cohorts were matched for clinical and operative variables, including age, BMI, smoking history, diabetes, hypertension, history of radiotherapy, history of chemotherapy, mastectomy type, mastectomy weight, ADM use, implant type, and operating surgeon. Outcome variables were complications and revision operation rates of the reconstructed breasts. Complications included infection, wound dehiscence, seroma/hematoma, capsular contracture, implant malpositioning, and implant rupture. Wound dehiscence was defined as wound breakdown along the margin of the surgical incision (30.5 cm) that was treated conservatively or with surgical intervention. Seroma/hematoma was defined as an abnormal collection of fluid or blood, which was treated by surgical intervention. Capsular contracture was contracture diagnosed as Baker class III or IV by the attending surgeon. Implant malpositioning was defined as an implant that needed additional operative procedures to correct its dislocation or malrotation. Implant rupture was defined as a tear in the outer shell of the implant diagnosed using magnetic resonance imaging.

Continuous variables are presented as mean ± standard deviation, and categorical variables are summarized as frequency and percentage. Before matching patients in the two groups, clinical and operative categorical variables of the groups were compared using a χ2 test or Fisher’s exact test and continuous variables were compared using an independent t-test. Propensity score-matching was used to reduce the selection bias for the group variable. Logistic regression was used to estimate the propensity score, where the augmentation group was regressed on baseline characteristics and one-to-one nearest-neighbor matching was performed with a 0.2 caliper width of the pooled standard deviation of the propensity score logit (24). We verified the balance across groups in the matched sample using the standardized mean difference (<0.1 in absolute value). A generalized estimating equation and Fisher’s exact test were used to evaluate complication and revision operation rates for the matched data. To identify potentially relevant factors associated with the outcome variables, multivariable conditional logistic regression analyses were performed using the matched cases. Adjusted odds ratios are reported with 95% confidence intervals (CIs). Statistical significance was defined as P<0.05. All analyses were performed using SAS version 9.4 (SAS Institute, Cary, NC, USA). 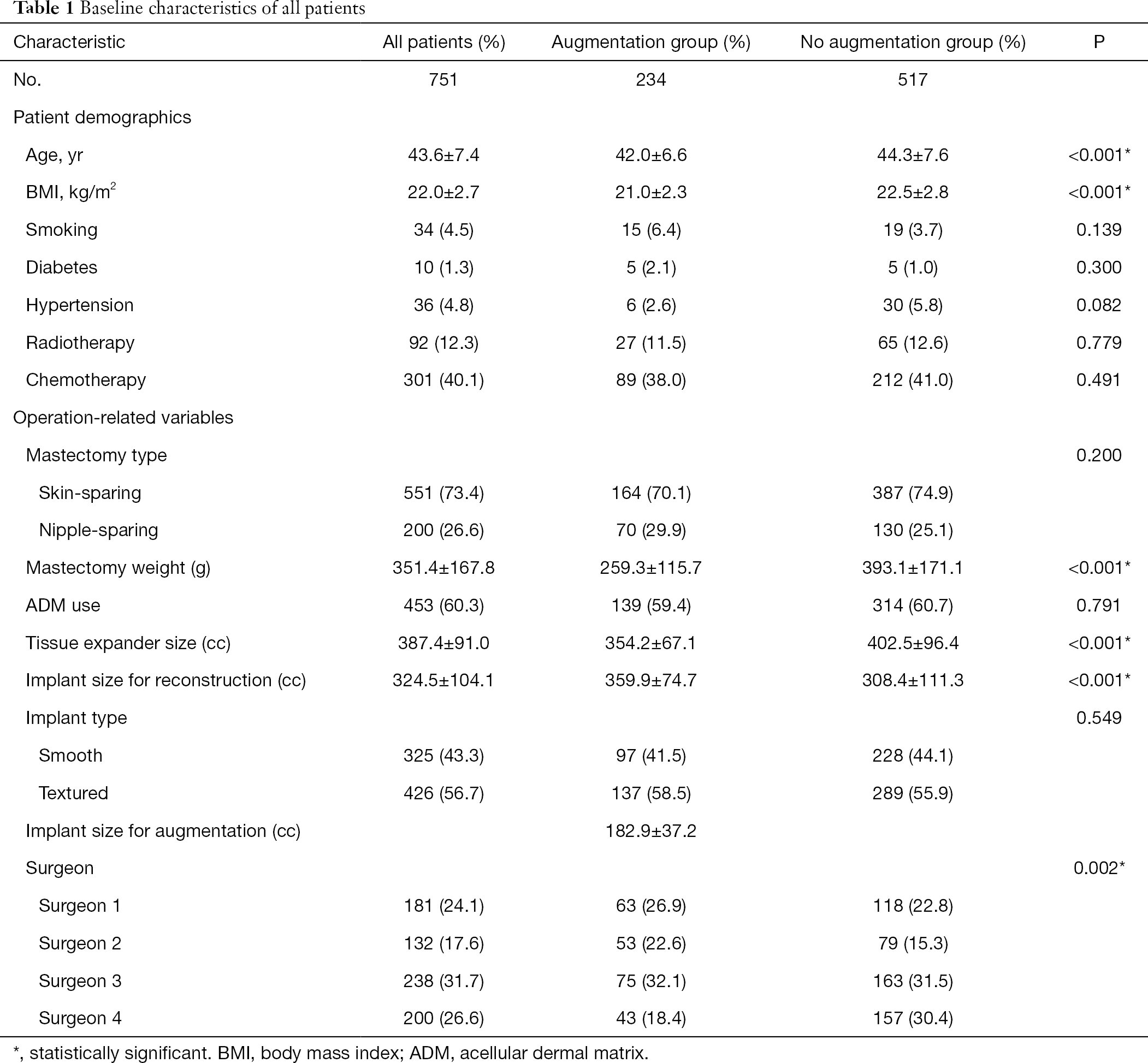 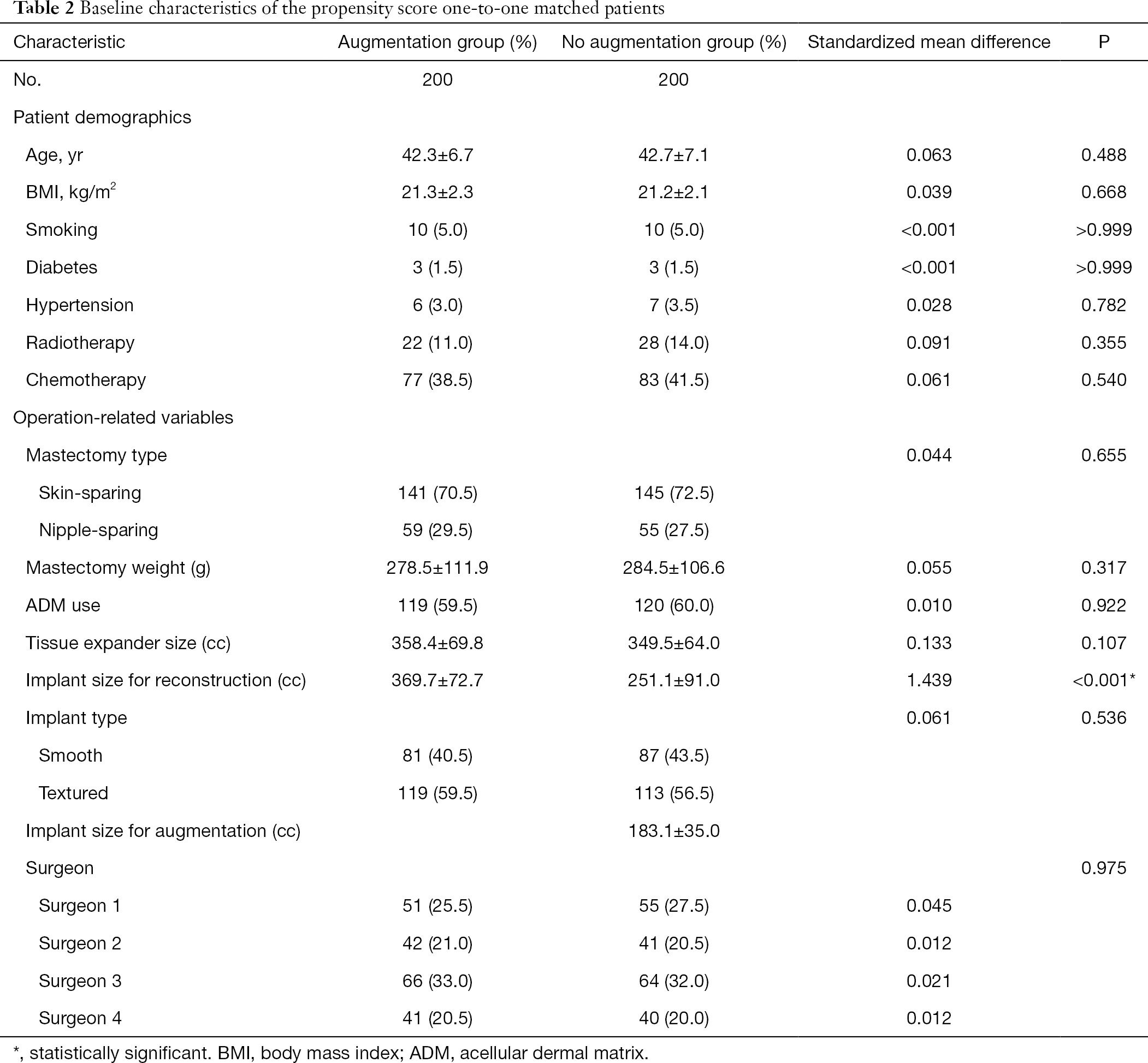 After controlling for potential confounders using multivariable conditional logistic regression analysis of the matched cases, contralateral augmentation mammoplasty (OR, 3.457; 95% CI, 1.039–11.498; P=0.043) was associated with significantly increased odds for a revision operation of the reconstructed breast after the second stage of tissue expander/implant breast reconstruction (Table 4). Conversely, no significant factors were associated with overall complications in the multivariable analysis performed using matched data (Table 5).

This study evaluated the effect of contralateral augmentation mammoplasty on the postoperative complications of tissue expander/implant breast reconstruction and demonstrated that contralateral augmentation was significantly associated with the need for a revision operation on the reconstructed breast after exchanging the expander for a permanent implant. Propensity score-matched analysis excluded the effects of clinical and operative variables, including age, BMI, smoking history, diabetes, hypertension, history of radiotherapy, history of chemotherapy, mastectomy type, mastectomy weight, ADM use, implant type, and operating surgeon, that were different between the augmentation and no-augmentation groups and had the potential to affect the surgical outcomes. To the best of our knowledge, this study is the largest clinical series that evaluated the impact of contralateral augmentation mammoplasty as a matching procedure on the postoperative complications of the reconstructed breast after implant-based breast reconstruction.

The results of this study indicate that contralateral augmentation mammoplasty is associated with significantly increased odds for a revision operation after the second stage of an immediate tissue expander/implant breast reconstruction. Risk-benefit assessment and preoperative counseling are necessary for patients undergoing contralateral augmentation mammoplasty with implant-based breast reconstruction.

We would like to thank Editage (www.editage.co.kr) for English language editing.

Reporting Checklist: The authors have completed the STROBE reporting checklist. Available at http://dx.doi.org/10.21037/gs-20-509

Conflicts of Interest: All authors have completed the ICMJE uniform disclosure form (available at http://dx.doi.org/10.21037/gs-20-509). The authors have no conflicts of interest to declare.

Ethical Statement: The authors are accountable for all aspects of the work in ensuring that questions related to the accuracy or integrity of any part of the work are appropriately investigated and resolved. This study was approved by the Institutional Review Board of Samsung Medical Center (IRB No.: 2020-01-094), and was performed in accordance with the principles of the Declaration of Helsinki (as revised in 2013). The requirement of obtaining individual consent was waived for this retrospective analysis.