The incidence of breast cancer, one of the most common malignant tumors in women, has risen continuously in recent years (1). Surgery is the main mode of treatment for breast cancer at present. In the past, the majority of breast cancer patients required axillary lymph node dissection (ALND). However, ALND can lead to various complications of the upper extremity that significantly impact patients’ quality of life, such as edema, pain, numbness, and movement disorders. Sentinel lymph node biopsy (SLNB) has gradually become routine in breast cancer management for staging axillary lymph node status. Patients who are found to have negative SLNs after undergoing SLNB may not need to undergo ALND, which significantly reduces the risk of complications and speeds up the patient’s return to normal life (2,3). SLNB in breast cancer is usually performed using methylene blue (MB), radioisotope, or a combination of the two (4,5). High rates of sentinel lymph node detection have been reported with all of these methods; however, the high costs, necessity for training, and radiation exposure associated with radioisotope limit its use. In contrast, blue dye does not possess limitations and has become widely used in SLNB. Blue dye can be injected easily and allows SLNs to be clearly visualized. However, studies have reported a reduced detection rate when MB is used alone, along with a higher false negative rate, which has given rise to concerns regarding potential disease recurrence and long-term prognosis (6,7).

Evidence exists to suggest that SLN detection guided by indocyanine green (ICG) fluorescence may serve as a highly sensitive modality for SLNB. This technique combines the advantages of both radioisotope and MB to enable transcutaneous real-time lymphography and SLN staining (8-15). Therefore, this study aimed to evaluate the potential value of ICG as a novel tracer for guiding SLNB by comparing its clinical performance with that of MB in SLNB in patients with breast cancer.

We present the following article in accordance with the STROBE reporting checklist (available at http://dx.doi.org/10.21037/gs-20-671).

Between May 2018 and October 2018, 70 breast cancer patients were diagnosed at the First Affiliated Hospital of Nanjing Medical University. The diagnoses of all patients were confirmed by core needle biopsy or open biopsy. All procedures performed in this study involving human participants were in accordance with the Declaration of Helsinki (as revised in 2013). The study was approved by the medical ethics committee of the First Affiliated Hospital of Nanjing Medical University (No. 2018-MD-077). Patients meeting any of the following criteria were excluded: previous radiotherapy for breast cancer; unable to tolerate surgery; previous axillary surgery; inflammatory breast cancer; distant lymph node metastasis; hypersensitivity to ICG or iodine, or accompanied by other diseases. Written informed consent was obtained from all patients before participation in the study.

Quantification of injection dose and the operation procedure

Two different sites in the upper outer part of the areola were selected, and 1 mL MB and 1 mL ICG were subcutaneously injected, respectively. There is no mutual interference between ICG and MB. The breast was massaged for 10–20 seconds to ensure the tracer entered quickly into the breast stroma and lymphatic vessels. Then, the operation room light was turned off. The device was turned on, and the lymphatic vessels from the ICG injection site to the site where the axillary fluorescence had developed were observed. An incision was made 1–2 cm from the point where the fluorescence in the lymphatic vessels disappeared, in the direction of the axilla.

❖ MB: blue-stained lymph nodes in the tissue at the marked incision were observed simultaneously. All lymph nodes stained blue were marked and counted.

All detected lymph nodes were removed and submitted to the Department of Pathology for pathological diagnosis. Mammectomies and other surgical procedures were carried out where necessary, in accordance with clinical standards.

All statistical analyses were performed using the SPSS® statistical package, version 22.0 (SPSS Inc., Chicago, IL, USA) for Windows®. Quantitative variables were presented as the mean ± standard deviation (SD), while qualitative variables were presented as the numbers and percentages of cases. Paired-sample t-tests were performed to compare the number of SLNs detected by ICG and MB in each patient. P<0.05 was considered statistically significant.

Between May 2018 and October 2018, 70 women with breast cancer were enrolled in this study before undergoing surgery. For all eligible patients, SLNB was performed first, and ALND was performed based on the results of SLNs examination during surgery. All of the subjects underwent SLNB using both ICG and MB. The patients had a median age of 49.1±9.7 years (range, 27–75 years). Table 1 summarizes the patients’ clinical characteristics.

The application of ICG NIF image-guided surgery in breast cancer is shown in Figure 1. 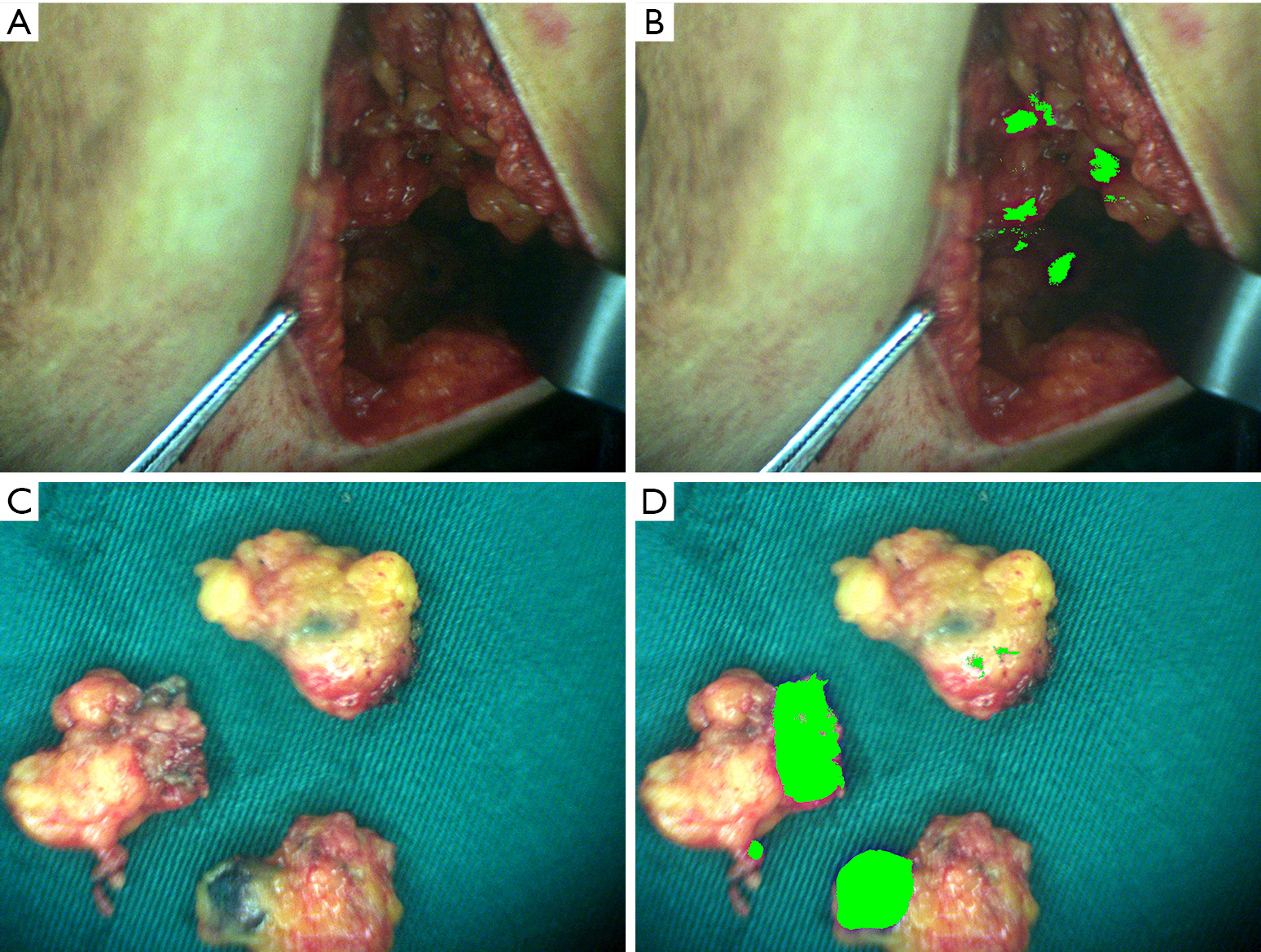 The overall SLN detection rate was 100% (70/70) for ICG and 93% (65/70) for MB. The total number of SLNs detected by ICG and MB was 243 and 169, respectively. The mean number of SLNs removed was 3.5±1.73 for ICG, compared with 2.4±1.49 for MB. The number of SLNs removed with ICG fluorescence was significantly higher than that with MB. There was a statistically significant difference in the number of SLNs detected using the two different methods (t=6.648, P<0.05). The results of pathology showed that the positive SLN detection rate with ICG was 25.7% (18/70), which was significantly higher than the 21.5% (14/65) with MB. As a result, 18 patients immediately underwent ALND, and lymph node micrometastases were found in the tissue samples postoperatively. No metastases were found by intraoperative or postoperative pathology in the samples of the remaining 52 patients. Therefore, the addition of ICG was associated with a significant increase in the detection rate of positive SLNs compared with MB alone. All data relating to the detection of SLNs are summarized in Tables 2,3. 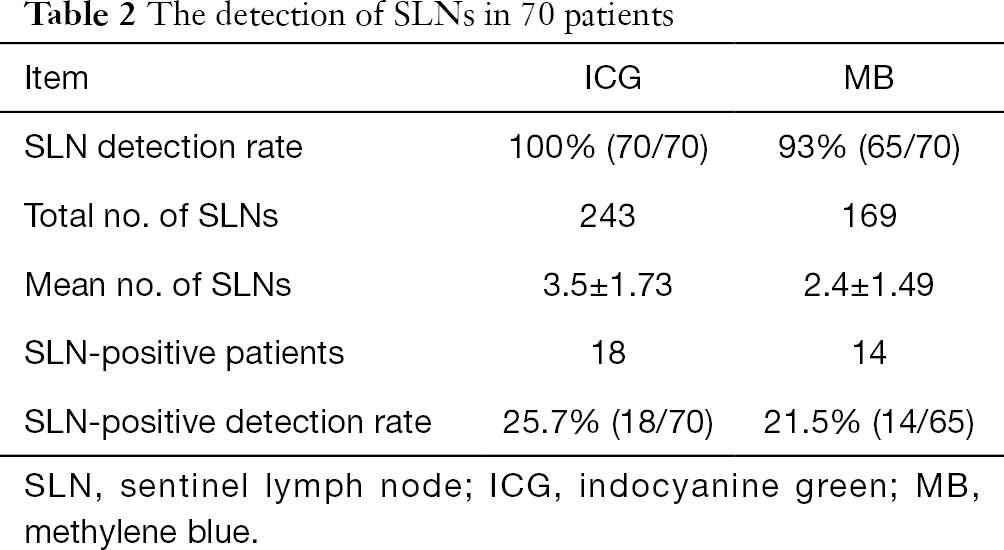 Table 2 The detection of SLNs in 70 patients
Full table

No acute allergic reactions to ICG injections were reported, and no adverse events, such as nausea, vomiting, and pain, were recorded.

MB and/or radioisotope are the main techniques used to detect SLNs in breast cancer. Dual localization techniques that employ both MB and radioisotope are effective in detecting SLNs. MB is widely used in China, owing to its convenience and low cost; however, due to radiation exposure as well as high equipment costs, radioisotope techniques are rarely adopted in hospitals. The present study aimed to assess whether the addition of ICG to MB could improve the SLN detection rate in patients with breast cancer (16,17). In addition to enhancing detection performance, ICG may improve accuracy. First and foremost, the high sensitivity of ICG was found to contribute to the harvesting of additional SLNs that undetected by MB (18-20). In this study, the numbers of SLNs detected by ICG apparently exceeded those of SLNs detected by MB (t=6.648, P=0.000<0.05). The higher sensitivity of ICG may be attributable to its higher visibility when observed by high-resolution near-infrared equipment. Moreover, this higher degree of visibility may also have contributed to the improved detection rate of positive nodes (ICG =25.7% > MB =21.5%), which may contribute to reducing false-negative assessments in axillary nodes and generating beneficial treatment strategies. For instance, some patients with no SLNs detected by blue staining do not require ALND; however, the identification of additional positive SLNs by ICG enables them to avoid being missed by ALND, which reduces the probability of recurrence and metastasis, and improves patient prognosis. Meanwhile, a number of studies have suggested that excessive ALND increases the risk of postoperative complications of the upper limb, while its effects on prognosis are unknown (21-25). Therefore, additional clinical trials should be conducted to establish any potential benefits for patients (26). The high identification rate and accurate diagnostic performance of ICG fluorescence potentially provide an alternative method for tracing SLNs, and ICG may eventually replace the traditional applications of blue staining and radioactive agents as the preferred method. Our findings are consistent with those of previous studies (27-30).

As previously reported, ICG-guided SLNB has several limitations. Firstly, the tissue penetration capacity of NIR fluorescence is inferior to that of gamma rays, which may lead to worse overall performance in patients, especially in those who are overweight (31,32). Furthermore, macrometastasis can limit the diffusion of ICG from the lymphatic channels to the lymph nodes. In such cases, ICG cannot penetrate into the initial lymph node or escape to the second echelon or false sentinel lymph node (33-35). Such disadvantages weaken the detection capability of ICG.

The current study had several limitations. Firstly, the sample size was small, the exclusion criteria did not eliminate individual variation, and the statistical efficiency needed to be further optimized. Future studies should address these issues to decrease confounding bias. Secondly, after all fluorescent nodes have been detected during the procedure, surgeons might tend to end the procedure, rather than continuing to search for more blue nodes. This might result in an overestimation of the accuracy of ICG and underestimation of the efficacy of blue staining.

Adverse effects, such as the temporary skin staining, permanent tattooing, and subcutaneous nodules at the injection sites sometimes result in certain, but acceptable, degrees of anxiety in some patients.

This study presented the high detection rate and superiority of ICG when used to detect SLNs in patients with breast cancer. ICG fluorescence should be used in hospitals and can be used as a substitute for MB or radioisotope in the absence of radioactive agents.

ICG has a high SLN detection rate and improves the mapping performance. As a tracing modality, ICG demonstrates great potential as a novel alternative to the traditional standard mapping methods.

Reporting Checklist: The authors have completed the STROBE reporting checklist. Available at http://dx.doi.org/10.21037/gs-20-671

Conflicts of Interest: All authors have completed the ICMJE uniform disclosure form (available at http://dx.doi.org/10.21037/gs-20-671). The authors have no conflicts of interest to declare.

Ethical Statement: The authors are accountable for all aspects of the work in ensuring that questions related to the accuracy or integrity of any part of the work are appropriately investigated and resolved. All procedures performed in this study involving human participants were in accordance with the Declaration of Helsinki (as revised in 2013). The study was approved by the medical ethics committee of the First Affiliated Hospital of Nanjing Medical University (No. 2018-MD-077). Written informed consent was obtained from all patients before participation in the study.