Normally, adipose tissue is observed in the parathyroid, salivary glands, thymus, breasts and pancreas; however, it is unusual to detect adipose tissue in the thyroid gland. Fat containing lesions of thyroid are very rare with only a few cases described in the literature. Normal thyroid occasionally may show presence of mature adipocytes in perivascular and subcapsular area anteriorly (1). Various fat containing lesions described in literature are heterotopic adipocytic nests, intrathyroidal thymic or parathyroid lipoma, lymphocytic thyroiditis, amyloid goiter containing lipomatous tissue, adenolipoma, lipomatosis, encapsulated papillary carcinoma and liposarcoma (2). We report a rare case of thyrolipomatosis in a 32-year-old hyperthyroid female and discuss briefly the proposed theories of pathogenesis and differential diagnosis of fat containing thyroid lesions.

A 32-year-old female presented with midline neck swelling slowly increasing in size since the past 2 years. She complained of weight loss with normal appetite and sleep disturbance. There was no history of palpitation, tremor, sweating, menstrual irregularity, difficulty in swallowing or hoarseness of voice. Past history revealed that she was a known case of hyperthyroidism on suppression therapy of 10 mg/day neomercazole since past two years.

On examination pallor was seen without any signs of icterus. Local examination revealed diffuse thyromegaly measuring 5 cm × 4 cm involving both lobes, more prominent on right side. The mild tender swelling was soft in consistency, moving with deglutition. Clinical diagnosis was hyperthyroidism with toxic multinodular goiter. 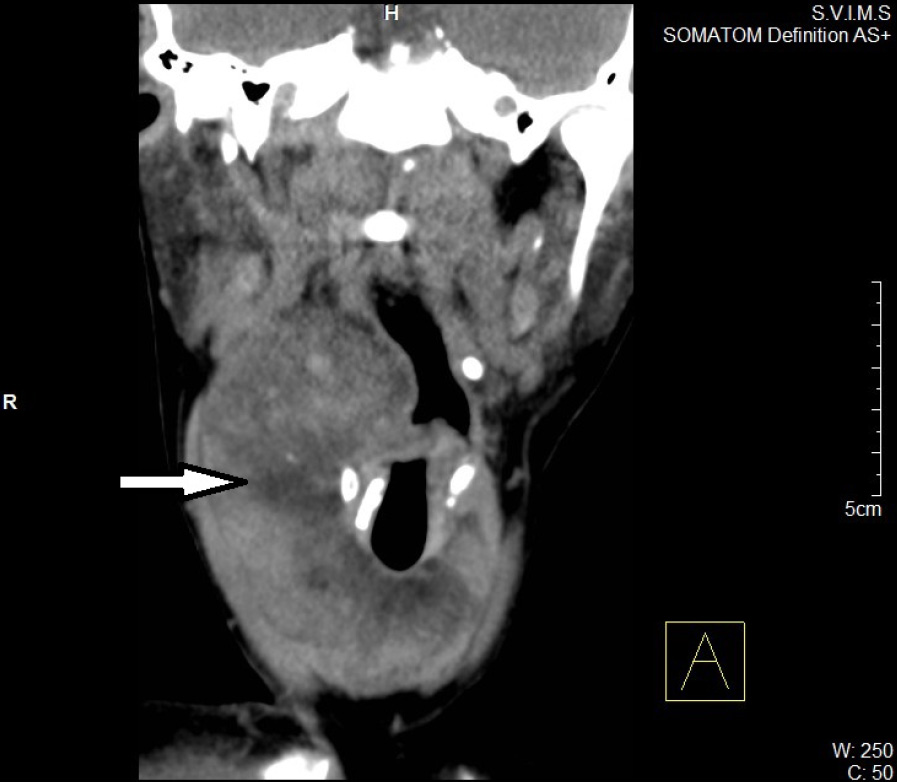 Other investigations performed were indirect laryngoscopy which was normal and echocardiography revealed normal left ventricular function. Serum T3 was 12.1 ng/dL, T4 was 128.85 µg/dL and TSH 0.01 mIU/mL. Retroviral serology, HBsAg and HCV were non-reactive.

Fine needle aspiration cytology of right lobe of thyroid was performed which revealed hyperplastic follicular epithelial cells in clusters and attempted follicles with thin colloid in the background. An impression of colloid goiter was suggested. 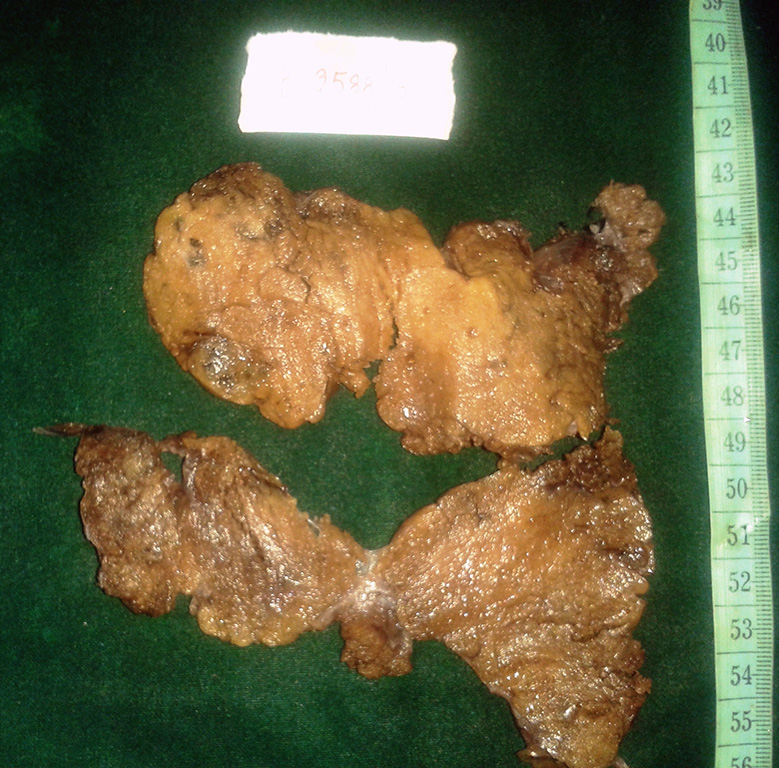 Microscopic examination revealed lobules of normal to colloid filled macro follicles lined by cuboidal cells separated by thin fibrous strands with intervening congested blood vessels, foci of haemorrhage and few hemosiderin pigment laden macrophages. In addition was found diffuse presence of mature adipose tissue in the interfollicular stroma without any cytological atypia (Figure 3). Neither lymphocytic collection, hurthle cells, amyloid nor papillary structures could be found. A histopathological diagnosis of thyrolipomatosis was made. 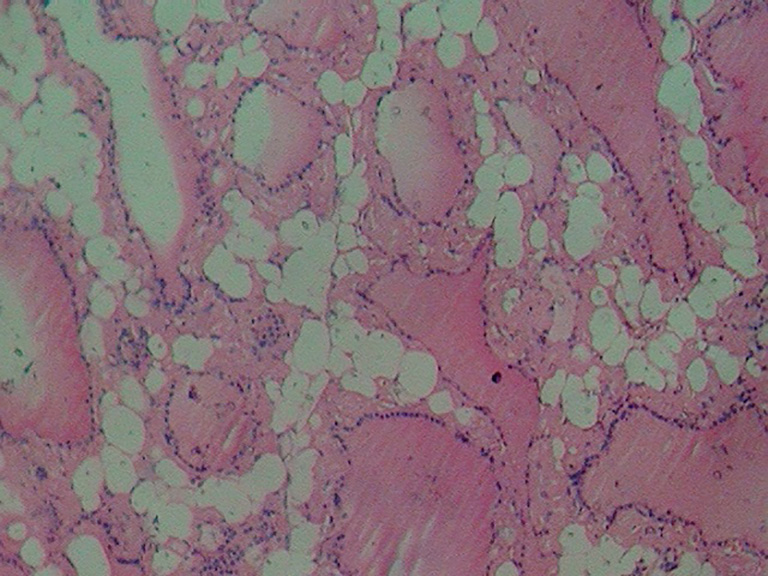 The presence of mature adipose tissue in thyroid is an uncommon occurrence. In most cases it is found in a subcapular location; most authors attribute this finding to inclusion of mesenchymal fat and sometimes muscle during embryologic development (1). Some authors think that adipose tissue is included in the thyroid gland during embryogenesis and that thyrolipoma is a true neoplasm with proliferation of fatty tissue (3).

Fat-containing lesions of the thyroid gland can broadly be categorized as (I) macroscopic mature fatty tissue containing lesions; and (II) lesions rich in microscopic intracellular fat vacuoles, or lesions that are referred to as clear cell rich or lipid-rich neoplasms (2,4). Occasionally, lipomas of cervical region may mimic thyroid nodules, particularly when they grow into the thyroid gland, but findings at multiplanar cross-sectional imaging can be used to resolve this issue in most cases (5).

Much rarer are mass lesions or tumours, containing fat and thyroid tissue mixed together, sometimes surrounded by a fibrous capsule. Such lesions have been variously termed as adenolipoma, thyrolipoma, thyrolipomatosis, lymphocytic thyroiditis, amyloid goiter, intrathyroid thymic or parathyroid lipoma and malignant tumors like liposarcoma and encapsulated papillary carcinoma (4,6). Preoperatively, fine-needle aspiration cytology may suggest a diagnosis of thyroid lipomatosis based on an abundance of fat cells in the smear (7). However in our case we didn’t find any fat cells and therefore it was reported as colloid goiter. The possible reason could be that we employed non aspiration technique and it requires good amount of suction pressure to extract adipose tissue.

Metaplastic theory has both its supporters and refuters. Schröder and Böcker (6) believe in the origin of fat cells from stromal fibroblasts due to chronic tissue hypoxia is presumed responsible for the presence of fatty tissue in amyloid goitres. Massive steatosis of follicle cells, as seen in the lipid-rich variant of clear cell thyroid adenomas and carcinomas, is, however, claimed to most likely result from metaplastic transformation of neoplastic thyrocytes.

The origin of thyrolipoma is unclear; since there appears to be a proliferation of both fat and thyroid tissue, it may represent a hyperplasia of both the thyroid and mesenchymal tissue, or, conversely and less likely, the fat may represent a mesenchymal metaplasia. LiVolsi (4) believes the latter is unlikely since the cases reported indicate no associated fibrosis or inflammation, which is usual in fatty metaplasia in other organs, e.g., cystic fibrosis.

Some patients have been reported in whom amyloid goiter has been associated with fat. A few cases of adipose tissue admixed with thyroid have been described in which the entire gland is affected; these lesions have been called hamartomatous adiposity or adenolipomatosis (9).

An extremely unusual tumor has been reported by Vestfrid (10), this was a papillary thyroid carcinoma occurring in a 53-year-old woman. In many areas of the tumor the cores of the papillae were composed of mature adipose tissue.

According to Ge et al. (11) parathyroid lipoma should be kept in mind in the differential diagnosis of thyrolipoma, especially in patients with extrathyroidal nodules and positive parathyroid scans. In these cases, the presence of cytoplasmic glycogen supports the parathyroid tissue. Sheikh and Massloom (12) described a case of lipoadenoma where the adipose tissue was abundant and little viable native tissue leading to a diagnostic dilemma about its origin, whether is it from thyroid or parathyroid. The final diagnosis of thyroid origin was based on immunohistochemical positivity for thyroglobulin marker.

This case has been presented because of its rare occurrence. These lesions are considered to be benign and treated surgically.