Radical prostatectomy (RP) remains the standard surgical treatment for long-term control of clinically localized prostate cancer. As an advanced medical technology, robot-assisted RP (RARP) has tremendously changed the art of performing prostatectomy, but laparoscopic RP (LRP) is still routinely performed for localized prostate cancer at many centers that do not have a robot. Urinary incontinence is one of the most dreaded complications that influences the quality of life of patients who have undergone RP. One of the factors associated with this complication is urethrovesical anastomosis (UVA), which is the final step of the procedure. However, laparoscopic intracorporeal suturing for achieving UVA is one of the most challenging and time-consuming tasks for surgeons. Therefore, the surgical techniques for this part of the procedure have seen continuous improvements over the years (4).

The standard method for UVA, which involves a poliglecaprone suture, requires follow-through by an assistant when continuous anastomosis is performed. An assistant in training may find it difficult to follow through; this may affect the quality of the anastomosis, and thereby result in complications. As a solution to the issues with the poliglecaprone sutures, barbed sutures were introduced: these self-anchoring knotless sutures incorporate tiny barbs spaced evenly in a helical array on the suture. The advantages of barbed sutures are that they prevent slipping and ensure even distribution of tissue force across different barb points. In China, the continuous poliglecaprone suture method has been widely adopted; in particular, the single-needle continuous anastomosis method advocated by Zhang (5) has been shown to have several advantages. We have tried to improve this method with the use of a double semi-circular anastomosis technique called double-needle bidirectional barbed suture. The present study is a single-institute retrospective analysis of the use of poliglecaprone suture and bidirectional barded suture for UVA during LRP. We present the following article in accordance with the STROBE reporting checklist (available at http://dx.doi.org/10.21037/gs-20-371).

Between 2013 and 2019, a total of 54 consecutive patients underwent LRP that was performed by one experienced surgeon at a single medical center. The study cohort included 27 consecutive patients who underwent UVA with the poliglecaprone suture and 27 consecutive patients who underwent UVA with bidirectional barded suture. The inclusion criteria were clinically organ confined or locally advanced prostate cancer. Patients who had undergone prostatic, urethral, or bladder neck surgery or neoadjuvant therapy previously, as well as those with indications of extracapsular extension on magnetic resonance imaging and those with preoperative incontinence were excluded. All the patients underwent pelvic magnetic resonance imaging before the procedure. The study was conducted in accordance with the Declaration of Helsinki (as revised in 2013). The study was approved by the ethics committee of Shengjing Hospital of China (NO. 2020PS059K) Medical University and individual consent for this retrospective analysis was waived.

Characteristics of the study population

Patients were managed routinely after the procedure, and Foley catheter removal was performed at postoperative days 14−21. Follow-up data were available for patients who returned for a postoperative clinic visit and telephone visit, which typically occurred at postoperative month 1, 3, 6, and 12. At each follow-up visit, patients were asked about the number of pads used per day, and PSA was measured at 3-month intervals.

LRP was performed via the conventional transperitoneal approach combined with the anterior approach.

For Group 1, a 30-cm 2-0 poliglecaprone suture with a 26-mm 1/2C needle was used. The first suture was placed at the 8 o’clock position—outside-in on the bladder neck and inside-out on the urethra—and then the knot was tied. Next, the anastomosis was continued in a clockwise fashion, and the suture was run to the initial 8 o’clock position.

For Group 2, a 14×14 cm 2-0 bidirectional knotless barded suture (ETH105 V002) with two 26-mm 1/2C needles was used. Five trocars were used (Figure 1): a left lateral trocar in the left hand, a right medial trocar in the right hand. For the last stitch on the right, the left medial trocar in the right hand was used. The first suture was placed on the posterior lip of the bladder neck outside-in and inside-out on the posterior wall of the urethra, under the guidance of the ureter. Then, a mucosa-to-mucosa suture was performed at low tension at 5.3 o’clock with a forward needle, and at 7.9 o’clock with a reverse needle. Following this, the suture was tightened, the bladder neck and urethra were aligned, and the urinary catheter was replaced with a fresh one. The suture was continued in a similar way at 1 and 11 o’clock, until the two arms met at 12 o’clock, without the need for a knot. 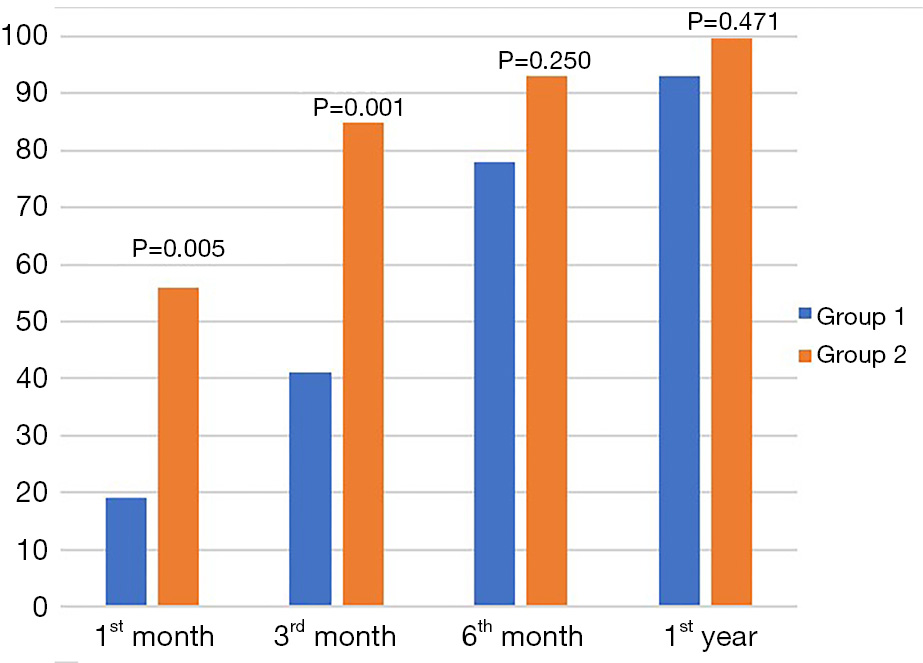 A 100-mL normal saline bladder filling was used at the end of all the procedures in order to rule out any leakage.

Functional data of all the patients were surveyed during routine outpatient and telephone follow-up, and then retrospectively collected for statistical analysis. Statistical analysis was performed using the Statistical Software for Social Sciences, version 22.0 (SPSS 22.0; IL, USA).

Continuous variables with normal distribution were compared with the Independent sample t-test, and data that were not normally distribution were compared between groups with the Mann-Whitney U-test. In addition, the chi-square and Fisher exact tests were used to compare categorical variables. P values less than 0.05 were considered to indicate significance. A multivariate logistic regression model was used to predict the association between early recovery of urinary continence and the analyzed variables.

The baseline clinical, pathological, and operative characteristics of the patients according to anastomotic suture type are summarized in Table 1. Of the 54 patients in the cohort, bidirectional barbed suture was used in 27 (50%) patients, and poliglecaprone continuous suture was used in 27 (50%) patients. There were no significant differences between these two groups with regard to patient age, BMI, prostate volume, last preoperative PSA level, Gleason score, and indwelling catheter time (P>0.05). With regard to complications, there were two cases of postoperative urine leakage (1 case of groups), both of which were cured by conservative treatment. There were also two cases (1 case of groups) of urethral stricture that were treated with dilatation. However, bidirectional barbed suture required significantly less anastomosis time than poliglecaprone continuous suture (21.33 vs.18.74 min, P=0.007). Moreover, the operative time was significantly shorter in the bidirectional barbed suture group (270.00 vs.210.00 min, P=0.008), which also had a significantly shorter hospitalization duration (10.00 vs.14.00 days, P<0.001) and significantly lower blood loss volume (100.00 vs.300.00 mL, P=0.005) than the continuous suture group. 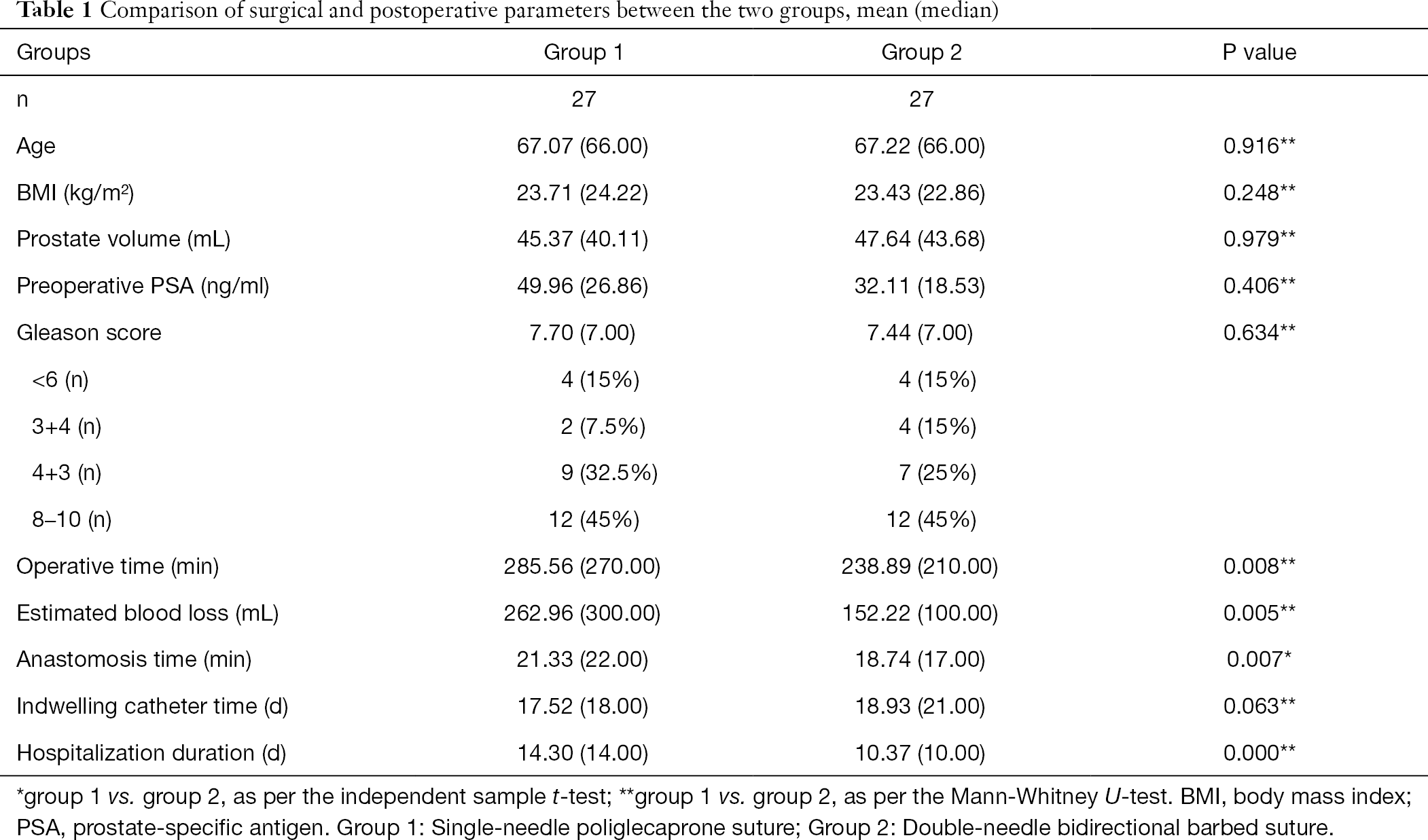 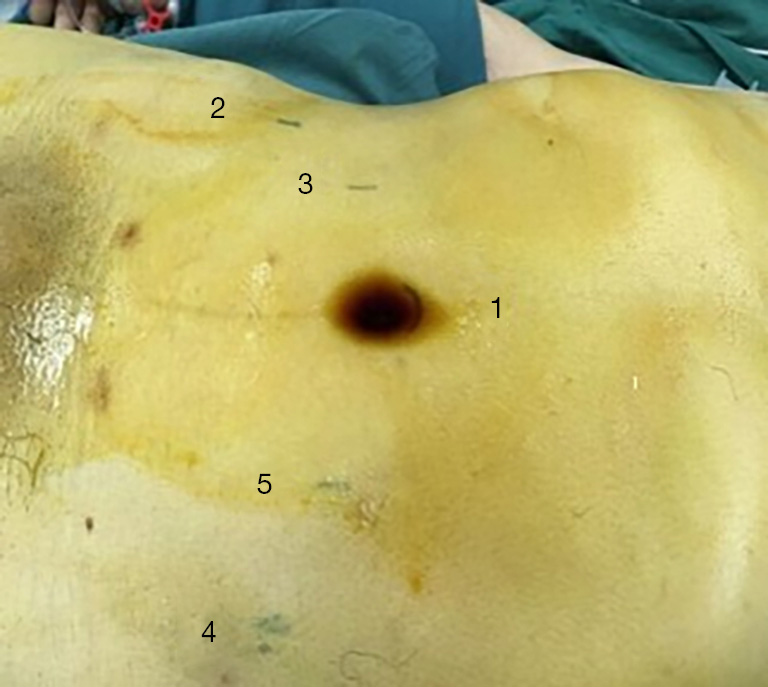 Figure 2 The locations of all the trocars. 1: Superior/inferior median umbilicus; 2 and 4: Medial side of the anterior superior iliac spine; 3 and 5: The outer margin of the rectus abdominis.

According to the findings of multivariable Cox regression analyses (Table 3), after controlling for all potential confounders, anastomosis time (HR =0.636, P<0.001) was found to be an independent predictor of postoperative continence recovery after LRP.

With regard to the postoperative urinary continence rates, in this study, double-needle bidirectional barbed suture resulted in significantly higher urinary continence recovery rates than the single-needle continuous suture at the postoperative first and third month. The recovery rate was higher in the sixth month and first year after surgery, too, but the difference was not significant. In agreement with our findings, the study by Ye and colleagues reported similar urinary continence rates for UVA with knotless bidirectional barbed suture at the postoperative third month, sixth month, and first year (13). Further, De Carlo and coworkers (14) and Zhang and co-workers (15) also reported urinary continence rates that were similar to those of the double-needle bidirectional barbed group of the present study at the third month, sixth month, and first year after RARP in their retrospective studies. The advantage of barbed suture over single-needle poliglecaprone continuous suture group in terms of continence recovery was also reported in a prospective study by Takeda and colleagues (16). Additionally, Cakici et al. (8) reported significantly higher urinary continence rates at the postoperative first month in the bidirectional barbed suture group. We considered that possible reasons may be: First of all, the single-needle continuous suture method is difficult to achieve even force in the whole circle when it is pulled from a physical point of view, so the anastomosis can’t be well done. Secondly, the pulling of double-needle bidirectional barbed suture from the starting point to both sides of the anastomotic site makes the tension evenly distributed at the anastomotic site and prevents the anastomotic site from sliding and twisting, which is conducive to the healing of the anastomotic site. It should be noted that although all these studies reported that the barbed suture technique was more advantageous, the urinary continence rates reported were different at the same time points after surgery. This difference could be attributed to the subjective assessment of this condition based on the number of pads used daily, as it is not possible to control when patients change, the size of the pads, and whether each pad is filled with urine before it is replaced. Other contributing factors could be individual differences between patient conditions, ethnic differences, preservation of the vascular nerve bundles, the length of the preserved posterior urethra, ligation of the retropubic vascular complex, and other differences in techniques.

Barbed sutures also have some disadvantages. For example, when the suture is overtightened, the barbs could “grasp” the surrounding tissue, block blood flow, and cause secondary injury. Williams et al. (17) reported in a prospective randomized controlled study that hematuria symptoms occurred on the fifth day after surgery with the barbed suture technique; cystographic analysis showed that tissue necrosis might be the cause of injury and hematuria. Further, a prospective cohort study (18) showed that urethral injuries and paraurethral tissue injuries occurred in 58.3% and 45.8% of the patients in the barbed suture group, respectively, and these values were significantly higher than those (21.6% and 18.9% respectively) in the non-barbed suture group. This might be a result of reduction of the elasticity of the external urethral sphincter and the subsequent continuous deterioration of external urethral sphincter function. Although such complications did not occur in the present cohort, this is an important subject of research for the future.

The main limitations of the present study are the small sample size and retrospective design. Besides, because of the different methods during two periods, the surgeon’s technique would have been improved during the second period. In this case, it may affect the surgical results of the two methods. Additionally, we did not report about improvement of virility, because the majority of the elderly population in Asia are more concerned about continence than intercourse. Another limiting factor is that urinary continence can only be determined based on the patient’s subjective judgment of the number of pads used daily, and not based on objective indicators. Therefore, a prospective study or another retrospective cohort study with a large sample is required to confirm the current findings.

The findings of this retrospective study imply that the double-needle bidirectional barbed suture technique provides excellent functional outcome without compromising on oncological control, and is safe and feasible for LRP. However, the findings need to be verified in a large sample as the current sample size was rather small.

Reporting Checklist: The authors have completed the STROBE reporting checklist. Available at http://dx.doi.org/10.21037/gs-20-371

Ethical Statement: The authors are accountable for all aspects of the work in ensuring that questions related to the accuracy or integrity of any part of the work are appropriately investigated and resolved. The study was approved by the Ethics Committee of Shengjing Hospital of China Medical University (number of ethical approval: 2020PS059K). The study was conducted in accordance with the Declaration of Helsinki (as revised in 2013). Informed consent was not required since this was a retrospective study and all data with personal identifiers were kept confidential.