Teratoma of the adrenal gland: clinical experience and literature review

Teratomas are most common from ovaries and testes, and patients usually have no overt clinical symptoms. Most teratomas are found in health examinations or gynecological examinations. Teratoma can also occur in the mediastinum, intracranial, sacrococcyx, and retroperitoneal space. Nevertheless, retroperitoneal teratoma is rare, especially adrenal teratoma, the incidence rate of which is 0.13% (1,2). The pathological classification of teratoma includes mature teratoma and immature teratoma. Mature teratoma means that there are no malignant and immature components in the tumor, and there are no similar lesions in other parts of the body (3). About 1.5–2% of teratoma is malignant. Immature teratoma contains immature embryonic tissue, about 26% of which is malignant (4).

The imaging characteristics of adrenal teratoma are partly like those of adrenal angiomyolipoma, myelolipoma, and adenoma (5,6). It is difficult to diagnose before the operation (7,8). Here, we describe a rare case of a 17-year-old woman who was diagnosed with pulmonary tuberculosis and right adrenal mass at the age of eight. Nine years later, she underwent retroperitoneal laparoscopic adrenalectomy with a pathological diagnosis of a right adrenal teratoma. We summarized the clinical manifestations and CT characteristics of adrenal teratoma and conducted a review of the relevant literature, and the information is summarized in Table 1. 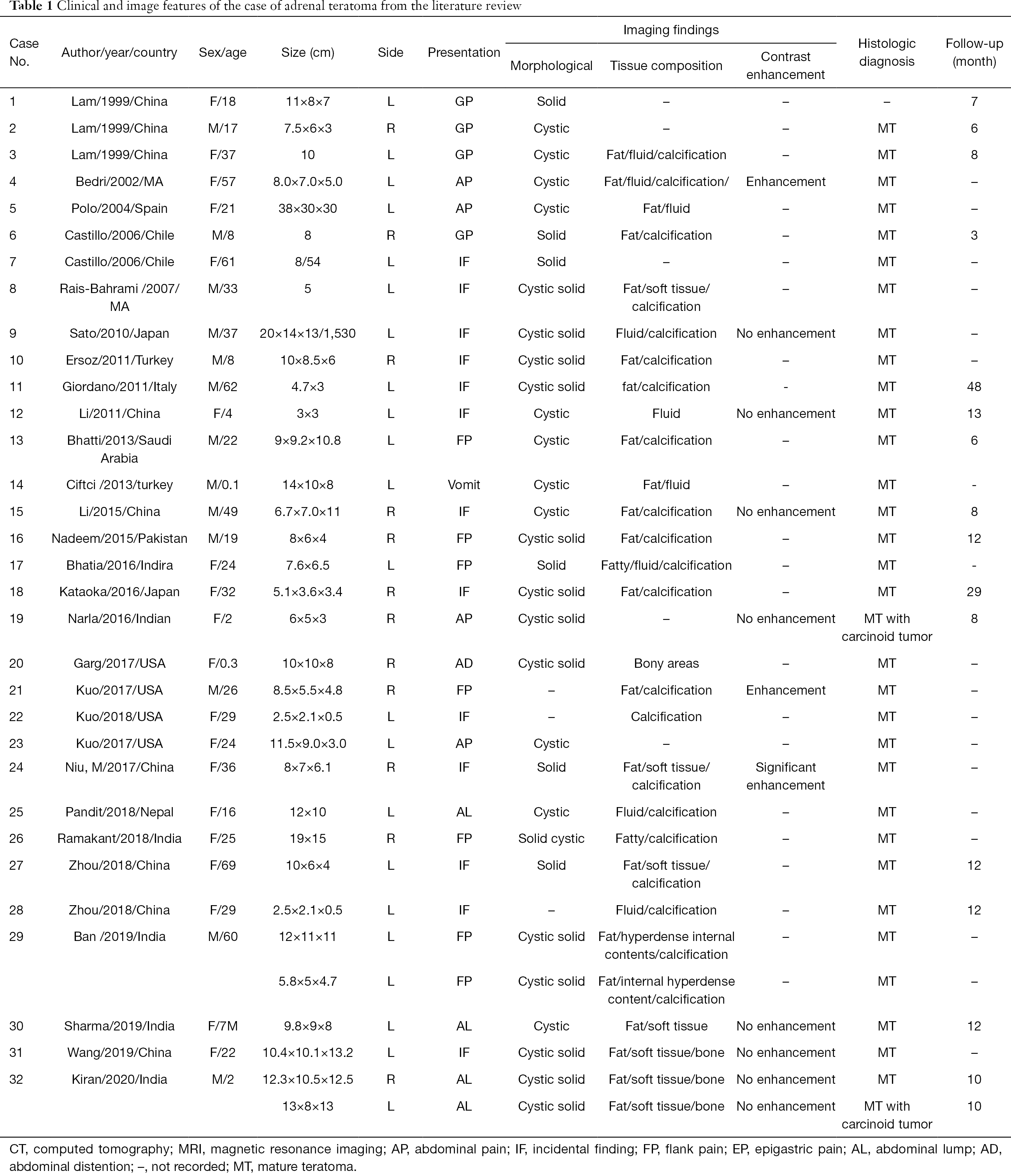 We present the following article in accordance with the CARE reporting checklist (available at http://dx.doi.org/10.21037/gs-20-648).

The 17-year-old Chinese woman first appeared in our hospital in July 2010, when she was only eight years old. CT showed a spherical mass of about 3.2 cm × 3.2 cm × 4.0 cm in the right adrenal region, with a clear and smooth boundary and multiple calcifications in the mass. The radiologist diagnoses adrenal myelolipoma or neuroblastoma, and she also suffers from tuberculosis in the middle lobe of the right lung and Upper lobes of both lungs (Figure 1). One month after anti-tuberculosis treatment, chest CT showed the absorption of pulmonary lesions decreased, and there was no change in the right adrenal gland mass. 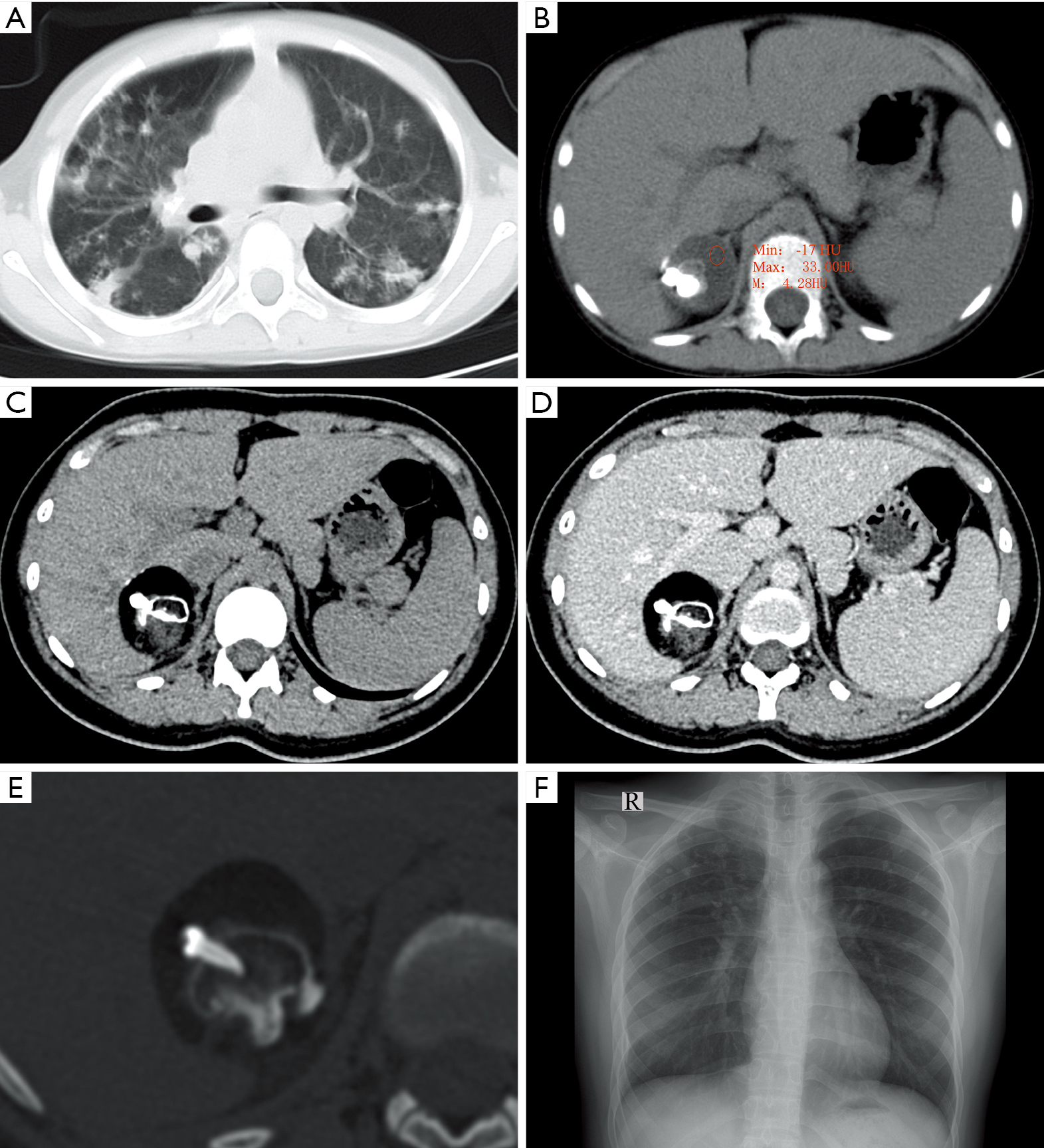 Figure 1 (A,B) A 17-year-old women at the age of 8. (A) Multiple patchy and nodular high-density shadows in the middle lobe of the right lung and upper lobes of both lungs, some of which were accompanied by punctate calcification [window width (WW) 1,382, window level (WL) −360]. (B) A spherical mass in the right adrenal region, with predominantly liquid density and multiple calcifications in the mass (WW 246, WL 65). (C,D,E,F) A 17-year-old women, CT image of upper abdomen. (C) Right adrenal mixed density mass with fat, soft tissue and calcification (WW 220, WL 40); (D) enhanced scan showed mild enhancement of soft tissue in the mass (WW 220, WL 40); (E) three-dimensional reconstruction showed there was tooth-like high-density in the mass (WW 2,612, WL 960); (F) chest X-ray, multiple patchy and nodular high-density shadows in both lungs.

She reappeared in our hospital in February 2019, during this period she had no clinical symptoms. CT showed a mixed density mass of about 5.2 cm × 4.2 cm × 5.6 cm in the right adrenal region with a CT value of −133 to 2,169 HU. The mass has fat, soft tissue, and calcification. The three-dimensional reconstruction showed that there was a tooth-like high-density shadow in the mass, and the soft tissue components were enhanced on a contrast-enhanced scan. Chest X-rays showed multiple patchy and nodular high-density shadows in both lungs (Figure 1). Laboratory tests showed that norepinephrine: 1,174.0 pg/mL (normal range <600 pg/mL), and adrenaline, dopamine, supine position, aldosterone, and standing position aldosterone were all normal. Ferritin: 10.2 µg/L (normal range 11.0–306.8 µg/L), and carbohydrate antigen 19-9, carbohydrate antigen 153, carbohydrate antigen 125, alpha-fetoprotein, carcinoembryonic antigen were all normal. She then underwent retroperitoneal laparoscopic adrenalectomy under general anesthesia and the tumor was completely removed. The vital signs of the patients were stable during the operation, the patients received hemostasis and symptomatic support treatment after operation, and the incision healed in one stage. The postoperative gross pathology showed that the tumor was gray white cystic with a size of 7.0 cm × 2.5 cm × 2.0 cm, containing hair, teeth and bean curd residue like substances. Microscopically, skin, sweat glands, hair follicles, sebaceous glands and adrenal tissues were seen. Pathological diagnosis was mature teratoma (Figure 2). Postoperative CT showed that the right adrenal teratoma was resected entirely, and no tumor recurrence or metastasis was found. During a one-year follow-up, the patients recovered well without any discomfort. 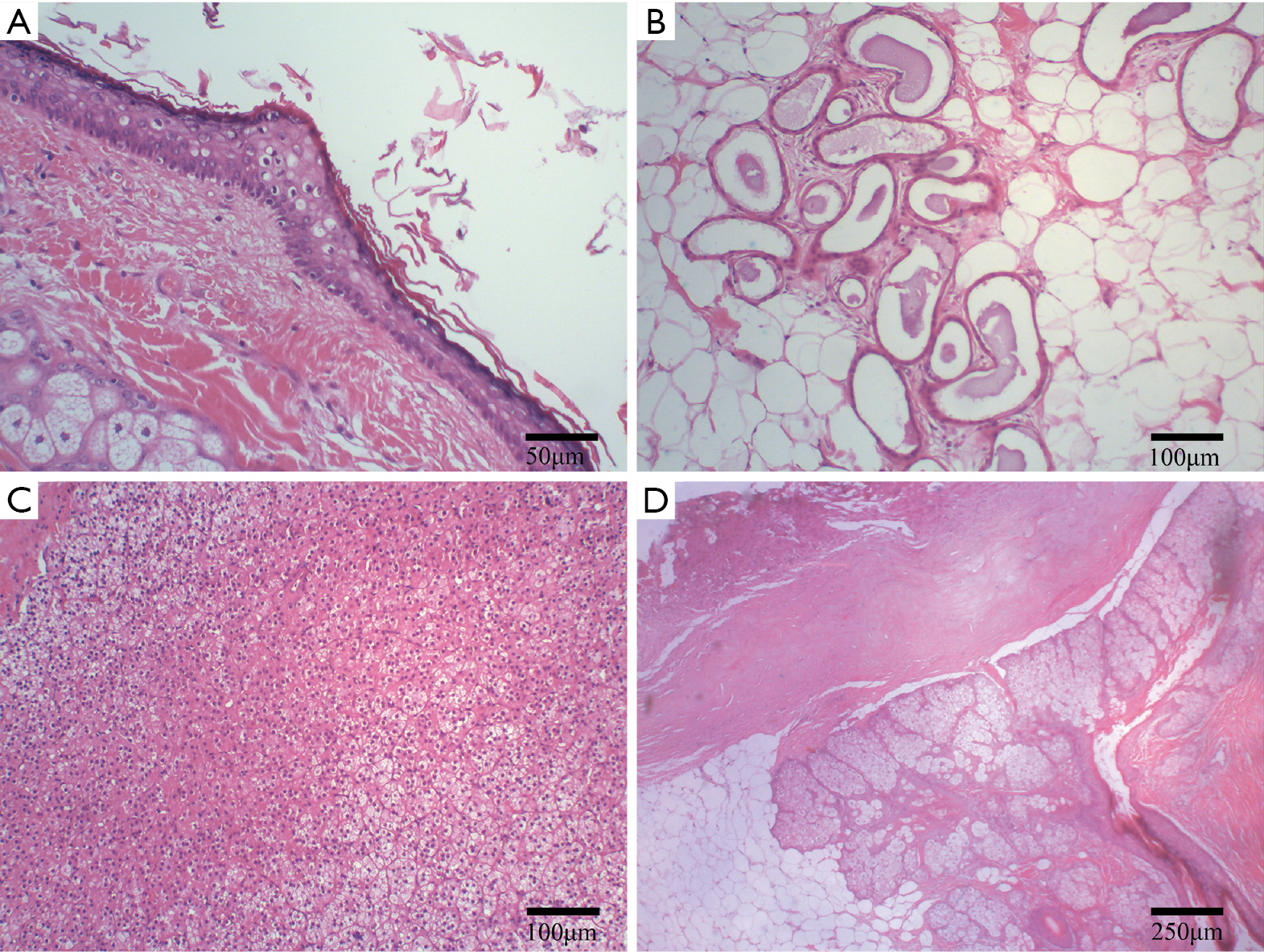 The ethics committee approved this study of The Affiliated Hospital of Zunyi Medical University, and informed consent was obtained from the patient for the anonymous use of the clinical, imaging, and histologic data for publication. All procedures performed in this study involving human participants were in accordance with the Declaration of Helsinki (as revised in 2013).

PubMed, Medline, Web of Science, and Ovid databases were searched for English-language case reports and case series of adrenal teratoma published in the last 30 years from April 1990 to March 2020. The following keywords were used: (Adrenal Glands or Adrenal Gland or Gland Adrenal or Glands Adrenal) and (Teratoma or Teratomata). The flow chart of the literature screening process is set out in Figure 3. A total of 26 full-text articles involving 32 cases were included for analysis (Table 1). 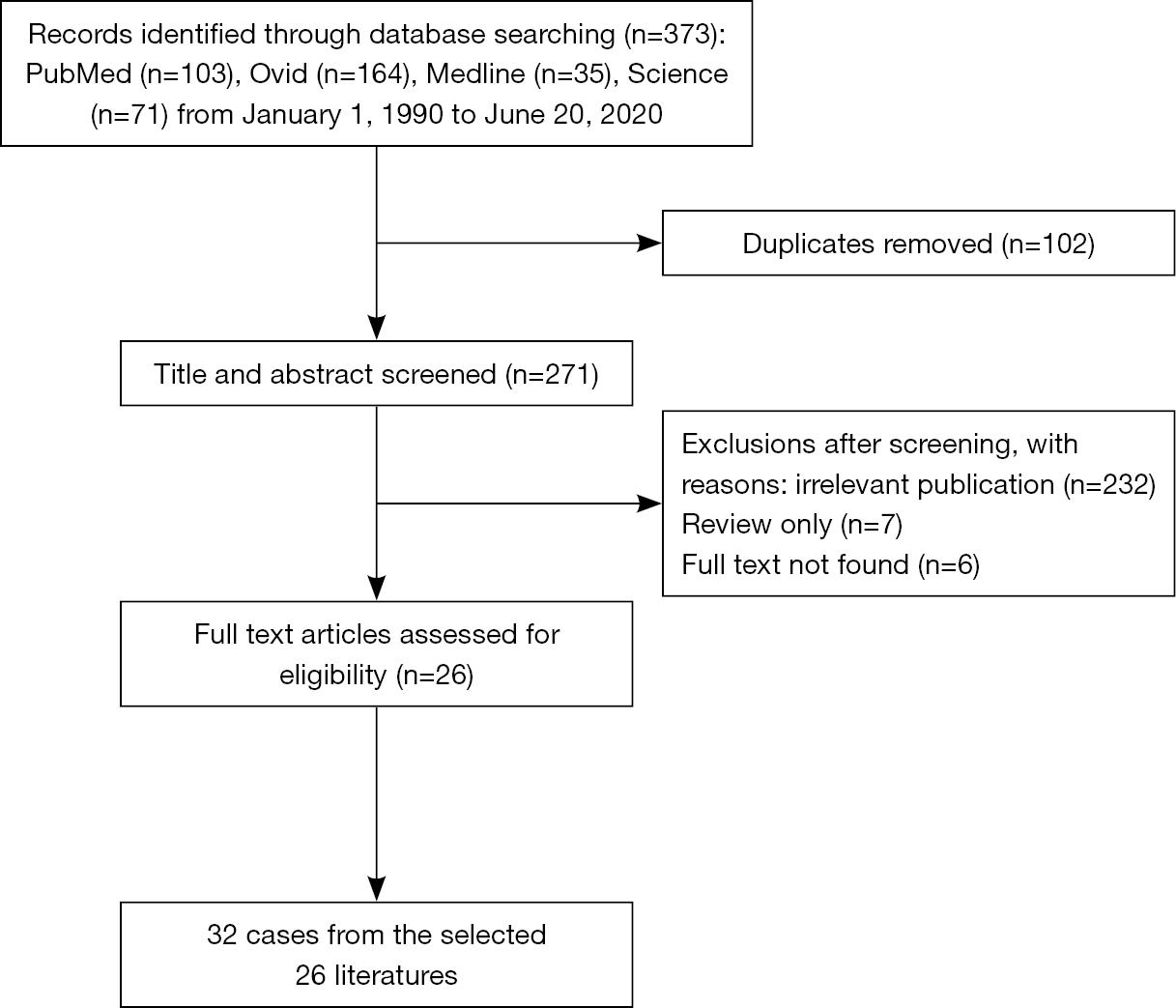 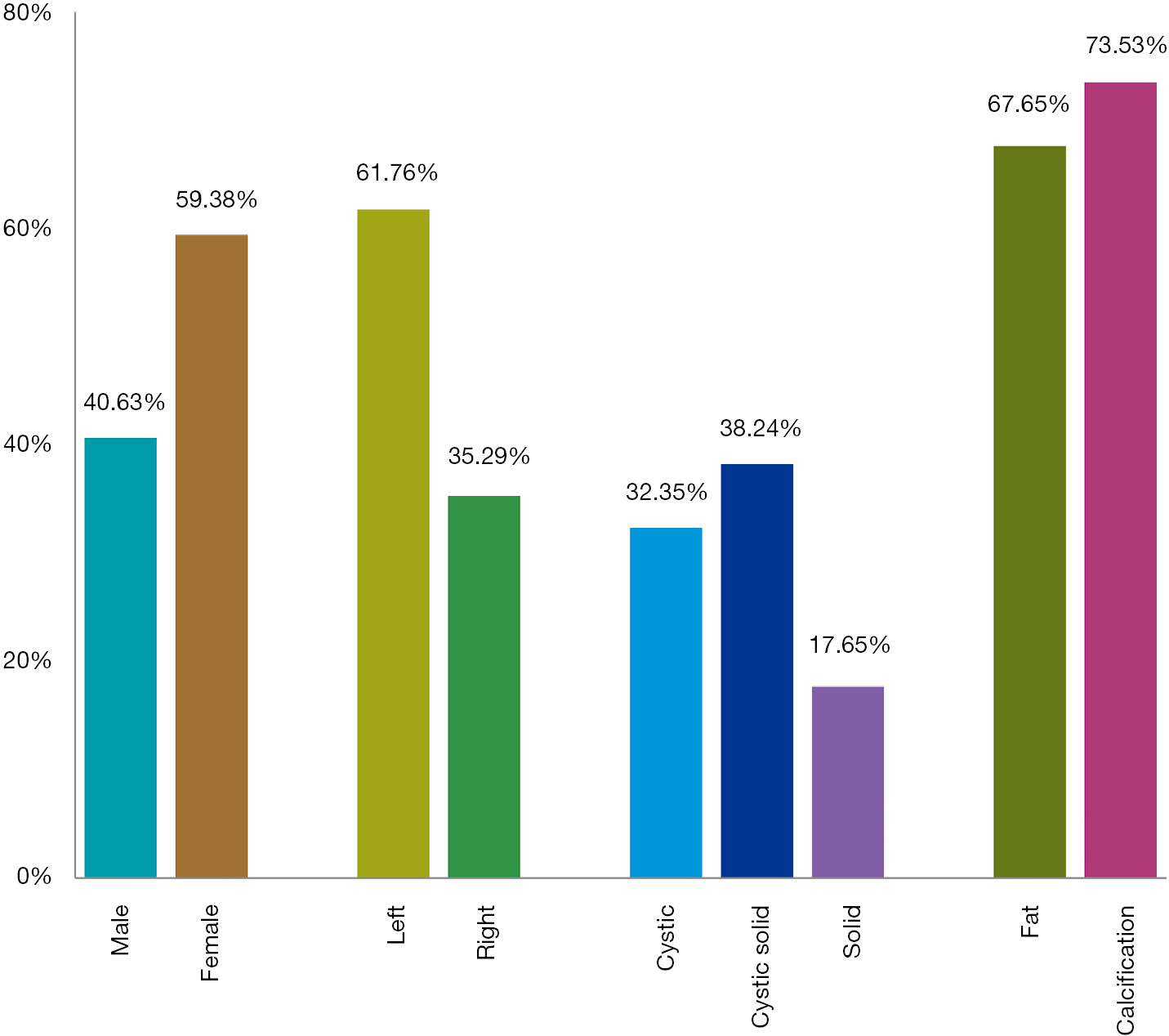 Teratoma is a type of germ cell tumor originating from peripheral pluripotent stem cells, which composed of tissues from the ectoderm, mesoderm, and endoderm tissues. The tumor may be solid, unicystic, multilocular, or cystic solid, containing hair, sebum, cystic fluid, calcification, or teeth (9). Teratomas are predominantly located in the gonads (testis or ovaries), 15% occurring in the extragonadal, 4% in the retroperitoneum, the adrenal gland is even rarer (10). According to the literature review, 32 cases of adrenal teratoma were reported in English-language literature before this. Patients with adrenal teratoma usually have no clinical manifestations. Additionally, some patients presented with low back pain, abdominal mass, upper abdominal pain, among many others. Adrenal-related endocrine tests are usually regular.

The imaging characteristics of adrenal teratomas are like those teratomas in other locations, most of which present as mixed density masses with predominant fat density/signal, and contain calcification, bone, teeth, soft tissue, and fluid components. Calcification can be punctate, radial, and linear. Soft tissue components can be accompanied by varying degrees of enhancement. The most critical preoperative diagnosis of adrenal teratoma is to differentiate it from other adrenal diseases with fat and calcification.

The most common adrenal lesion containing mature adipose tissue is myelolipoma, a benign tumor containing bone marrow components (14,15). Adrenal myelolipoma has no endocrine function and is often found incidentally during physical examination (16). Adrenal myelolipoma presents as a soft tissue mass, and with fat density on CT, 20% of which accompanied by calcification, and the soft tissue part is enhanced. The adipose component shows a high signal on both T1WI and T2WI on MR, while bone marrow shows a low signal on T1WI and isosignal on T2WI, the signal on fat suppression image decreases significantly. There is no signal decreasing on in-phase and out-phase images.

Adrenal angiomyolipoma is also rare. The content of these components determines the imaging findings of adrenal angiosarcoma. The larger ones (>4 cm) may be accompanied by scattered calcification, and the enhanced scan shows significant enhancement (17). The calcification of adrenal teratoma is lamellar, annular, or linear, and the teratoma has no enhancement or mild enhancement, which can supply the basis for the differential diagnosis of radiologists.

Differential diagnosis of adrenal teratoma and other calcified lesions

In the case we reported, the patient had a history of tuberculosis, so the possibility of adrenal tuberculosis must be considered. Adrenal tuberculosis is often caused by blood invasion of Mycobacterium tuberculosis. The clinical manifestations are low fever, fatigue, night sweats, adrenal dysfunction, among many others (20). The CT features of adrenal tuberculosis are bilateral adrenal enlargement, irregular shape, and high density (21). When there is caseous necrosis, the density of the mass is uneven and may be accompanied by an insufficient amount of calcification, complicated with large retroperitoneal lymph nodes, and circular enhancement. In the later stage, the whole adrenal gland was calcified, or part of the cheese was calcified. Contrast-enhanced scans often showed marginal enhancement, low-density casein necrosis in the center, or inhomogeneous enhancement (22).

Reporting Checklist: The authors have completed the CARE reporting checklist. Available at http://dx.doi.org/10.21037/gs-20-648

Conflicts of Interest: All authors have completed the ICMJE uniform disclosure form (available at http://dx.doi.org/10.21037/gs-20-648). The authors have no conflicts of interest to declare.

Ethical Statement: The authors are accountable for all aspects of the work in ensuring that questions related to the accuracy or integrity of any part of the work are appropriately investigated and resolved. The ethics committee approved this study of The Affiliated Hospital of Zunyi Medical University, and informed consent was obtained from the patient for the anonymous use of the clinical, imaging, and histologic data for publication. All procedures performed in this study involving human participants were in accordance with the Declaration of Helsinki (as revised in 2013).