Oncoplastic techniques for breast cancer have reduced the number of mastectomies and allow to achieve good cosmetic results also in patients with large ptotic breasts. A quadrant per quadrant atlas was designed by Clough et al. developing different mammoplasty techniques according to the tumour location, allowing breast conservation following large excision (1). When less than 20% of breast volume is excised, a level I oncoplastic procedure is often adequate, permitting tumour excision by a single periareolar incision. Level II oncoplastic techniques allow to treat malignancies located at all different breast quadrants, when excision of volume is more of 20–50% and gland volume and size are appropriate, without compromising breast natural shape thus improving patient’s self-image (1). For large tumour located at upper outer quadrant a racquet technique can be utilized. However, this lateral mammoplasty results in a long radial scar over the original tumour site with a periareolar extension. When removal of tumour overlying skin is needed, mammaplasty techniques represent an optimal choice to achieve surgical radicality and good cosmetic results. If skin to be removed belongs to upper outer quadrant, where large ptotic breasts require T mammoplasty, such method could lead to poor outcomes, meaning severe gland reduction. Cutress et al. have described a modification of the wise pattern in a series of 11 cases for tumor located in the upper outer or upper inner where a wise pattern would not be feasible, leaving a z scar on the breast (2). Latissimus dorsi (LD) mini flap also was described as a safe procedure to fill the space left by the quadrantectomy (3). We describe a novel technique for treating breast tumours in patients with severe breast ptosis located at upper outer quadrant with the necessity to remove the overlying skin.

We present the following case in accordance with the CARE reporting checklist (available at http://dx.doi.org/10.21037/gs-20-349).

A 58-year-old woman with large ptotic breast (VII size with a 35.5 cm sternal notch-to-nipple distance) underwent neoadjuvant chemotherapy for 26 mm G3 invasive ductal carcinoma (ER 95%, PgR 20%, Ki-67: 25% HER2: pos) in the upper outer quadrant of the right breast, in association to skin retraction on April 2019. Before chemotherapy, tumour was clipped. Due to skin retraction, patient underwent skin tattoo at lesion. Followed 6 months of chemotherapy there was a complete radiological response, although skin appeared still retracted. Multidisciplinary team discussed the case and suggested quadrantectomy in addition to skin removal of previously tattooed area. Due to severe ptosis, right quadrantectomy through an inferior pedicle inverted T mammoplasty was chosen in addition to sentinel lymph-node biopsy and contralateral breast symmetrisation. After surgical planning, we decided to perform inferior bipedicled mammoplasty (by partially preserving skin at infero-lateral triangle) and to use it as coverage of removed skin at upper outer quadrant, to avoid excessive reduction of breast volume and addressed the patient for surgery on November 2019. Timeline is described in Figure 1. 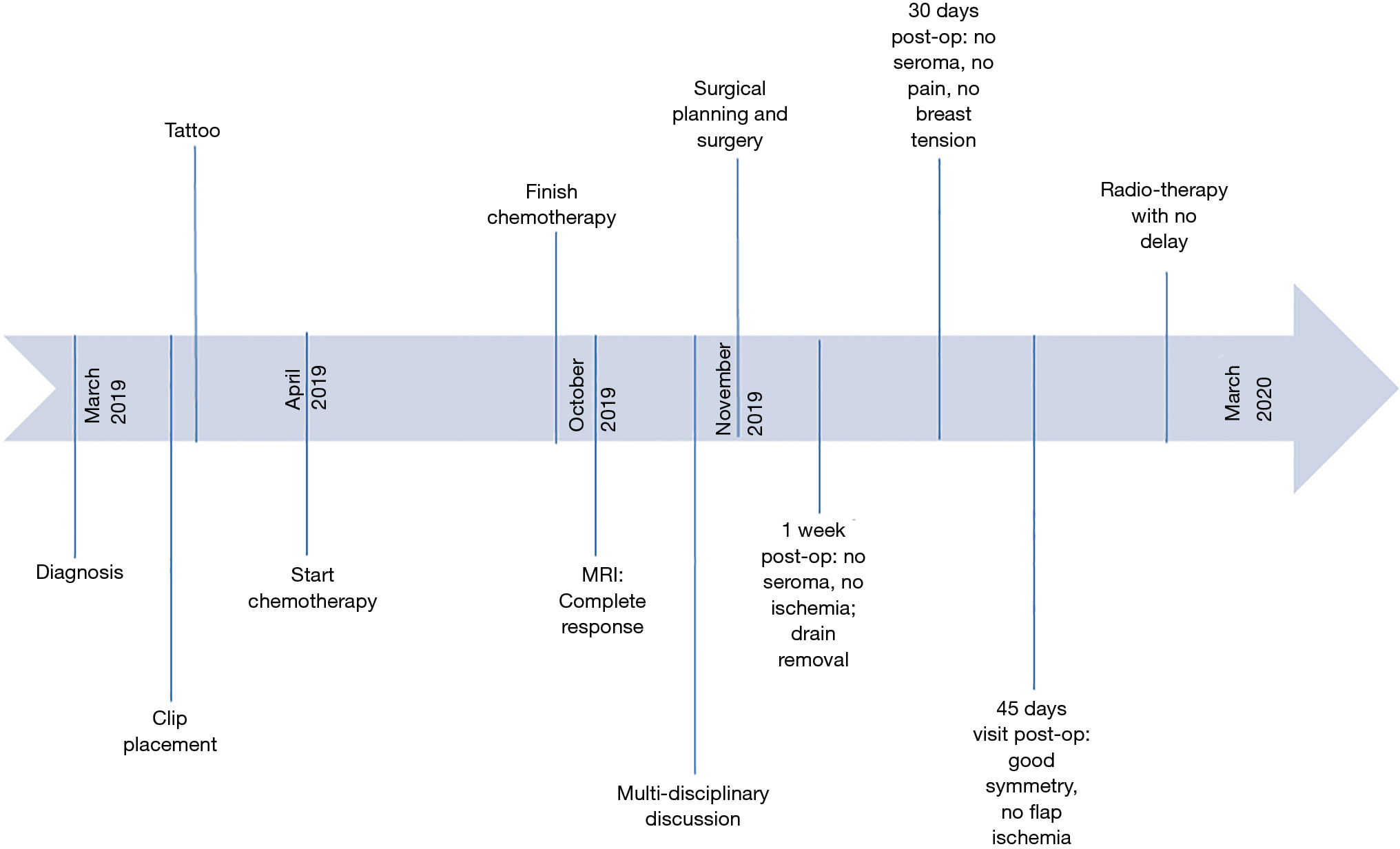 In the pre-operative drawings sternal notch to nipple distance was moved from 35.5 to 23 cm. Following Aufricht manoeuvre, tattooed skin overlying previous tumour remained out of inferior triangle (Figure 2) thus preventing radical reduction of breast volume. After de-epithelization of inferior pedicle at right breast, we carried out upper outer quadrantectomy including overlying skin. Specimen underwent pathological analysis, for margins involvement. Four amagnetic clips were located at quadrantectomy bed. Through the same incision, sentinel node was biopsied, confirmed negative. At infero-external part of inferior triangle (infero-lateral pedicle) skin was not de-epithelized: it stayed attached to Wuringer septum and was partially separated from inferior medially located pedicle, leading to an inferior bi-pedicled pattern (Figure 3). Following glandular resection, which involved superior quadrants and infero-medial triangle, new breast was assembled, moving lateral pedicle at quadrantectomy bed to upper outer quadrant (Figure 3). We placed one 19 Fr drainage per breast. Absorbable sutures were used for breast closure. Nipple areola complex was stabilized by 2/0 Mersilene running suture, while skin underwent 4/0 intradermic absorbable suturing. Nipple areola complex skin was sutured with 5/0 nylon. Patient was evaluated at 1 week (Figure 4), 1 month and 45 days (Figure 5). No complication occurred. Both nipple areola complex and infero-lateral flap did not show any ischemic signs. Drain was bilaterally removed after one week. Patient did not report any pain or breast tension. We did not experience any delays for adjuvant radiotherapy. The patient concluded adjuvant radiotherapy on March 2020 without complications. 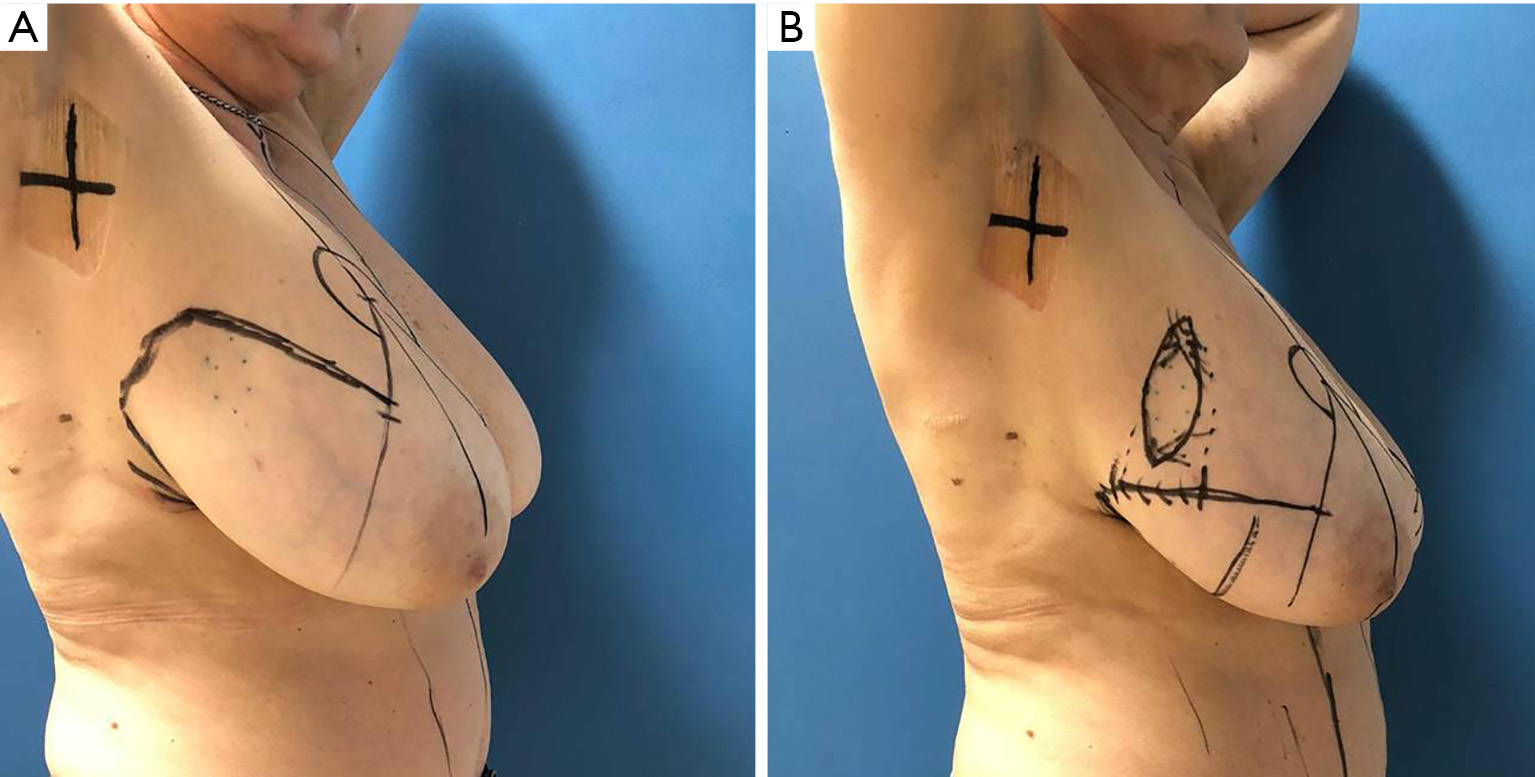 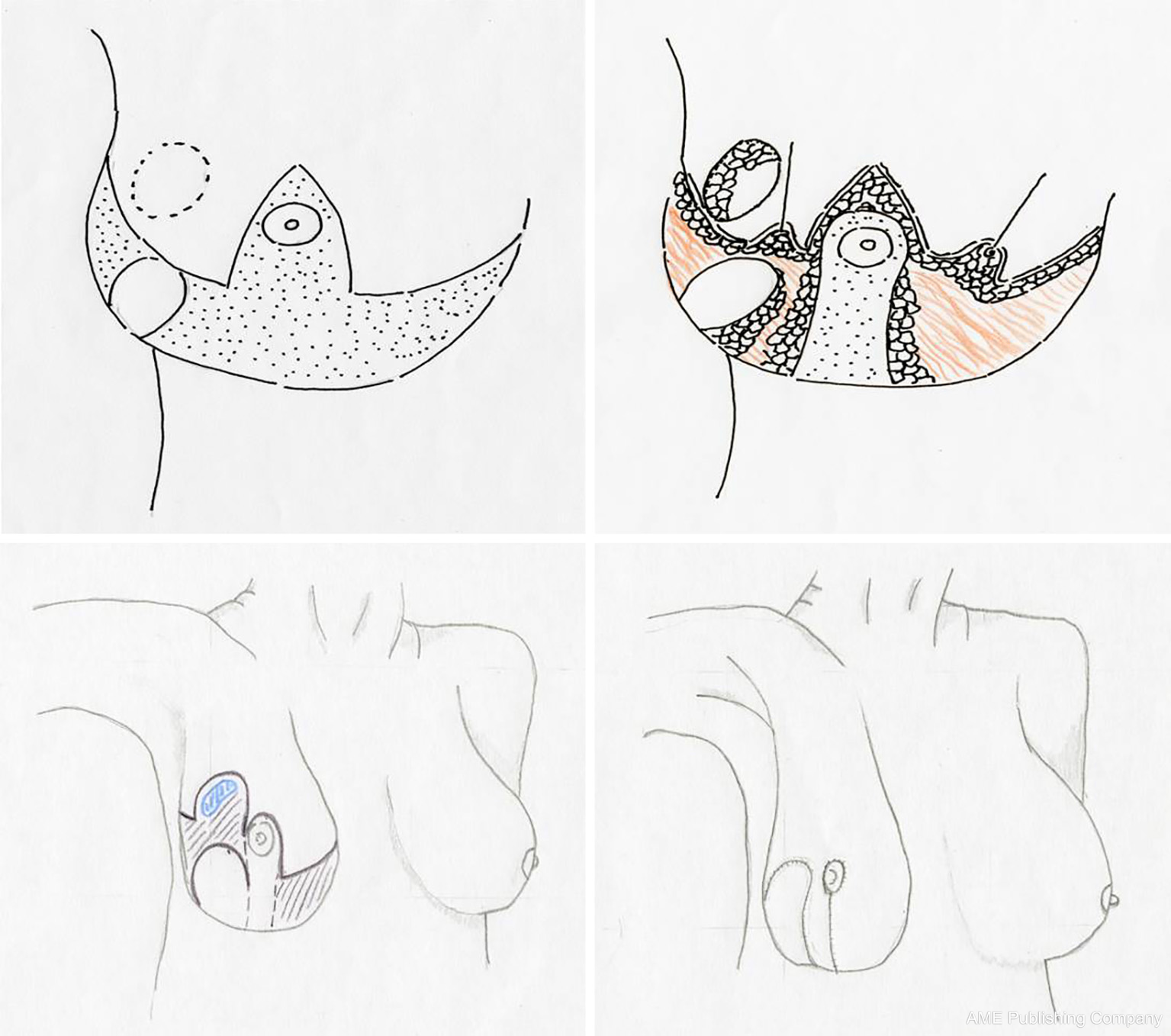 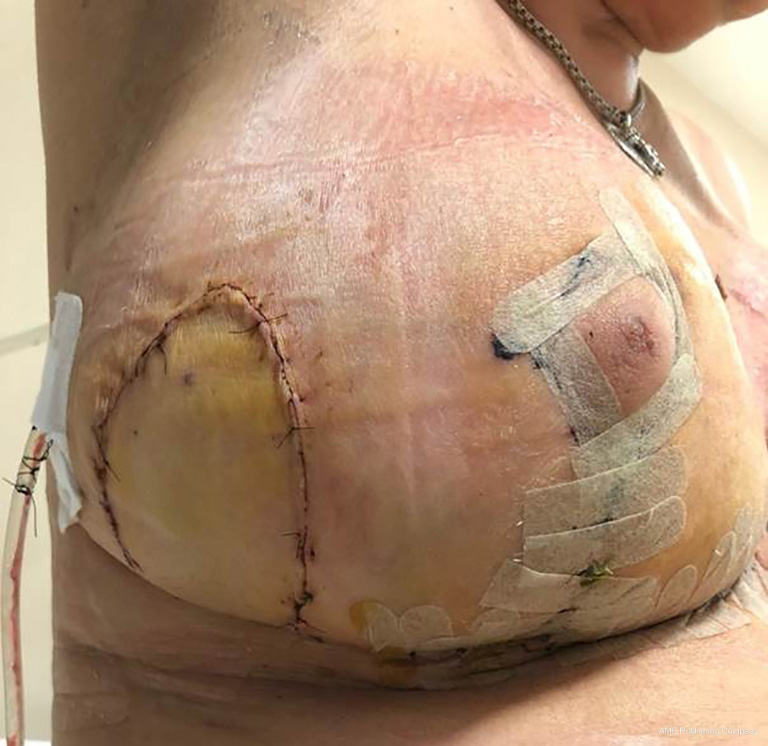 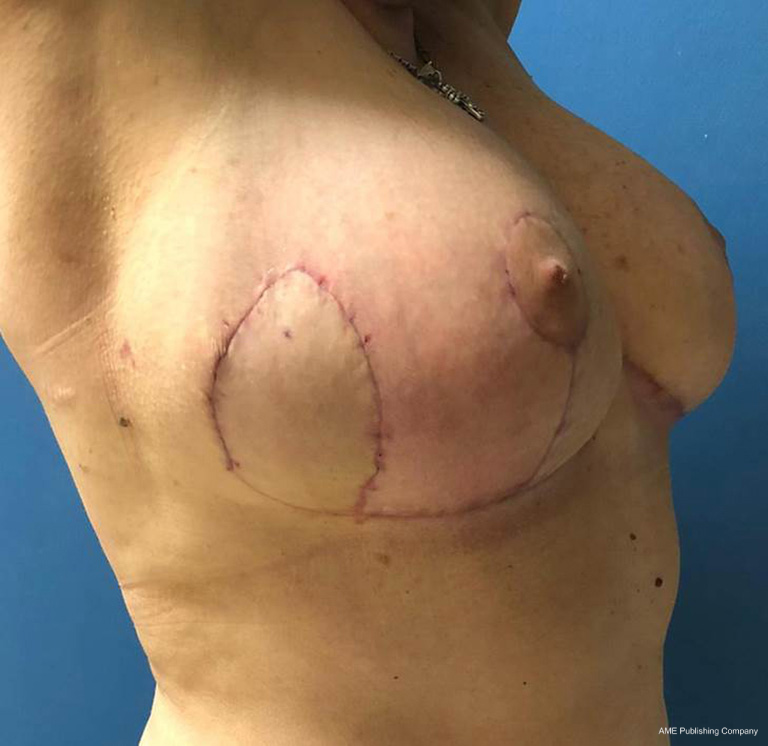 All procedures performed in studies involving human participants were in accordance with the ethical standards of the institutional and/or national research committee(s) and with the Helsinki Declaration (as revised in 2013). Written informed consent was obtained from the patient for publication of this case report and any accompanying images.

Therapeutic mammoplasty might allow most women to avoid mastectomy, with fewer complications than mastectomy and immediate reconstruction (4). Breast upper-outer quadrant represents the most common area where breast cancer occurs. Combination of breast conserving surgery (BCS) and plastic surgery techniques (oncoplastic breast surgery) represent a helpful surgical tool to achieve radical oncological excision, while preserving breast cosmesis (5,6). Breast reduction techniques are being largely employed in the treatment of breast cancer for patients with large and ptotic breasts. In cancer affected patients having big glandular volumes, breast reduction can reduce radiotherapy side effects, due to a larger irradiation area, such as seroma, fat necrosis or cardiac toxicity. Different techniques rely on pedicle vascularity, which can be classified as superior, inferior, medial and lateral, as well as free nipple techniques. During reduction mammoplasty, Würinger’s septum is usually preserved and many authors have described its role in maintaining blood supply and sensation of breast (7-9). Inferior pedicle breast reduction is a common approach which shows a short learning curve and can be easily applied (10). We used both traditional inferior pedicle technique and Würinger’s septum, in order to create a new pedicle, which is lateral to inferior one. Use of both septum and inferior pedicle was already analysed by Kelahmetoglu et al. (11). Nevertheless our method represents the first attempt to integrate inferior bipedicled mammaplasty and preservation of overlying skin. Our method allows to radically reduce breast volume, when skin resection is needed and tumour is located in upper outer breast quadrant, though it is too far from T pattern incision. Furthermore, we observed no seroma or wound healing delay or minor complications at 1 week, 1 month and 45 days after surgery. This could be explained as a well vascularized vital tissues covered with skin carried in quadrantectomy area could improve scar healing and could reduce seroma production and fat necrosis. A limitation of this technique is represented by the number and the type of the scars and by the presence of a skin area of possible devascularization included between the vertical scar of the T pattern and the medial scar of the pedicled flap. The latter area needs a careful attention during the drawings and the preparation of the flap avoiding an excessive proximity of the two scars.

We thank Dr. Claudio Pedrazzoli for the drawings and Dr. Daniela Masi for language revision.

Reporting Checklist: The authors have completed the CARE reporting checklist. Available at http://dx.doi.org/10.21037/gs-20-349

Conflicts of Interest: All authors have completed the ICMJE uniform disclosure form (available at http://dx.doi.org/10.21037/gs-20-349). The authors have no conflicts of interest to declare.

Ethical Statement: The authors are accountable for all aspects of the work in ensuring that questions related to the accuracy or integrity of any part of the work are investigated and resolved. All procedures performed in studies involving human participants were in accordance with the ethical standards of the institutional and/or national research committee(s) and with the Helsinki Declaration (as revised in 2013). Written informed consent was obtained from the patient for publication of this Case report and any accompanying images.