The most widespread endocrine cancer is thyroid cancer. The overall thyroid cancer incidence increased from 4.9 to 14.7 per 100,000 people in 2011 (1). There are four main types of thyroid cancer, which includes papillary (PTC), follicular (FTC), anaplastic (ATC) and medullary thyroid cancer (MTC). The most common thyroid cancer type is PTC (2-5). PTC can not only occur as a single nodule, but also two or more anatomically separate foci in either unilaterally or bilaterally in the thyroid lobes (6-9).

Neck ultrasound (US) is a common way to detect PTC. High-resolution US can detect thyroid nodules in 19–68% of individuals, of which 7–15% of these cases are thyroid cancer (10-12).

According to 2015 ATA guidelines, thyroid lobectomy can be a sufficient treatment for patients with PTC <4 cm, and without extrathyroidal extension or clinical evidence of lymph node metastases (13).

We present the following article in accordance with the STROBE guideline checklist (available at http://dx.doi.org/10.21037/gs-19-157).

We divided all patients into two groups according to post-operative pathological findings: patients with bilateral PTCs (154, 16.7%), which meant contralateral occult PCT was confirmed and those with unilateral PTCs (767, 83.3%). Bilateral PTC is defined as cancer diagnosed histopathologically in both thyroid lobes at the same time. Patients who had a solitary tumor focus or multiple tumor foci located in one thyroid lobe are classified as having unilateral PTC. And the maximum of diameters of multiple tumor foci was taken. Clinicopathologic and demographics characteristics, including age, gender, tumor size, BRAFv600E mutation, multifocality of the primary carcinoma and lymph node metastases, were retrospectively reviewed and analyzed. There were 643 females (69.8%) and 278 males (31.2%), ranging in age from 13 to 77 years, with a mean age of 42.7±12.5 years. Tumor diameter was >1 cm on ultrasonography in 509 cases (55.3%), while tumor diameter was ≤1 cm in 412 cases (44.7%). And the mean tumor diameter was 1.46±0.89 cm. The number of patients with benign nodule in the contralateral lobe showed in pre-operation US was 347 (37.7%). Pathological observations revealed 224 tumors (24.3%) with extrathyroidal extension (ETE). And lymph node metastasis was found in 445 patients (48.3%). Pathological observations found out that there were 77 multifocal tumors (8.4%) of the primary carcinoma. The histological diagnosis was classified according to the World Health Organization system (15). The association between contralateral occult PTC and clinicopathological features of PTC was analyzed in this study.

The date collection was completed with Microsoft Excel. The clinicopathological features among groups were compared using the Pearson chi square test. Multivariate analysis was performed by binary logistic regression. P value <0.05 was considered statistically significant. All analyses were performed with the Statistical Package for Social Sciences (SPSS, Inc., Chicago, IL, USA) for Windows.

In this study, the incidence of contralateral occult PTC in patients was 16.7% (154 cases). There were 37.7% (347 cases) of patients have contralateral benign nodule of thyroid showed in pre-operation US. There were 445 (48.3%) patients with lymph node metastases, and 224 (24.3%) with extrathyroidal extension. And 328 (35.6%) patients were found to have BRAFv600E mutation positivity confirmed post-operatively.

Correlations between bilateral PTC and clinicopathological characteristics of PTC 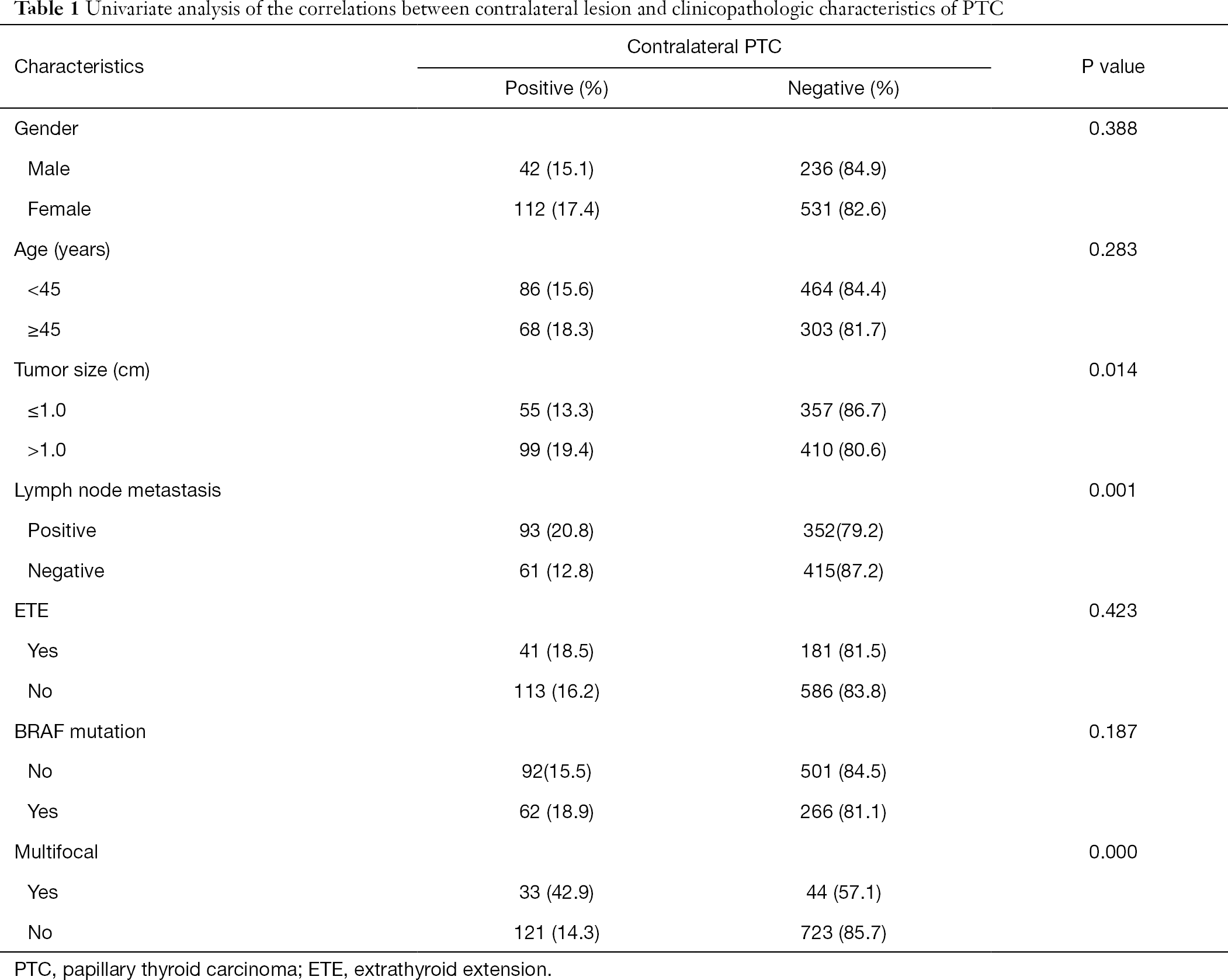 The incidence of PTC has increased rapidly in recent decades due to improved diagnostic accuracy of US, fine needle aspiration biopsy (FNAB) and increased awareness of thyroid nodular disease (16). Total or subtotal thyroidectomy, thyroid lobectomy, TSH suppression and radioiodine ablation have been universally accepted as standard treatments for thyroid cancer. According to the 2015 ATA guideline and a guide to diagnosis and treatment of differentiated thyroid cancer of China Anticancer Association head and neck tumor Specialized Committee (17), thyroid lobectomy could be a sufficient treatment for patients with PTC >1 and <4 cm, without extrathyroidal extension or clinical evidence of lymph node metastases (13). But when unilateral lobectomy is performed for patients with contralateral occult PTC, the occult PTC would cause recurrence and even require re-operation, which is related to higher surgical risks compared with primary surgery. The study of Ritter et al. reported that in 167 patients of unilateral PTC who underwent lobectomy, during a mean follow-up of 6.5 years, 18 patients (10.7%) had completion thyroidectomy, among which 12 of them were diagnosed as contralateral PTC (n=8, 4.8%) or lymph node metastasis (n=4, 2.4%) (18). According to Unalp, H.R, re-operation increased the incidence rate of complications including hypoparathyroidism and recurrent laryngeal nerve paralysis by 8 to 27 times (19), compared to that of primary surgery. Bilimoria et al. (20) reported a slightly lower 10-year recurrence rate for patients who received a total/subtotal thyroidectomy (total/subtotal thyroidectomy 7.7% vs. unilateral lobectomy 9.8%, respectively, P<0.05), which meant a lower re-operation rate (20). But there are different findings. Haigh et al. analyzed 4,612 patients receiving total thyroidectomy and 820 patients receiving lobectomy and found that there was no difference in 10-year overall survival and 10-year recurrence rate between total thyroidectomy and thyroid lobectomy groups (21). Considering this controversy, plus the fact that most PTCs showed excellent prognosis, surgical extent of unilateral PTC diagnosed pre-operatively should be well discussed and carefully decided.

In this study, ETE appeared to be an independent predictive factor of contralateral occult PTC in patients pre-operatively diagnosed as unilateral PTC. While Hwang et al. reported that bilaterality were more commonly found in PTC patients with ETE (23.6% with ETE vs. 9.7% without ETE) (27). And Kim et al. reported a similar result when analyzing PTMC (35). The difference between result of this study and those of Hwang’s and Kim’s could be due to the different selection of samples, where the latter studies include pre-operatively diagnosed bilateral PTC. In addition, McConahey et al. reported that ETE increased the risk of PTC recurrence and mortality (36). So when it comes to contralateral PTC with ETE, total/near-total thyroidectomy should be performed.

When pre-operative US shows a unilateral PTC, contralateral occult lesions could be missed or misdiagnosed as benign nodules, which might lead to serial consequences including tumor recurrence, re-operation and heavier financial and mental stress for patients. Thus, decision on surgical approach toward preoperatively diagnosed unilateral PTC should be carefully considered and wisely chosen. As shown in this study, lymph node metastasis, existence of contralateral benign nodule, multifocality of primary carcinoma and larger tumor size are independent predictive factors of contralateral occult PTC. In conclusion, we suggest that when dealing with unilateral PTC with one or more of these features, surgeons should take total/near-total thyroidectomy into consideration.

Reporting Checklist: The authors have completed the STROBE guideline checklist. Available at http://dx.doi.org/10.21037/gs-19-157

Conflicts of Interest: All authors have completed the ICMJE uniform disclosure form (available at http://dx.doi.org/10.21037/gs-19-157). The authors have no conflicts of interest to declare.

Ethical Statement: The authors are accountable for all aspects of the work in ensuring that questions related to the accuracy or integrity of any part of the work are appropriately investigated and resolved. The study was conducted in accordance with the Declaration of Helsinki (as revised in 2013). The study was approved by Ethics Committee of the Guangdong Provincial People’s Hospital (approval ID: 2019774H) and written informed consent was obtained from all patients.