Breast cancer treatment has changed over the last decade from radical mastectomy towards a more conservative surgical approach favoring skin sparing mastectomy (SSM) (1). Patients are more reluctant to accept a loss of their breast when other options exist and are increasingly requesting a combined ablative and reconstructive surgical procedure. Hence, SSM and more recently a nipple-areola sparing mastectomy (NSM) together with immediate breast reconstruction (IBR) are becoming a popular choice when indicated (1-3).

The preservation of the nipple areolar complex (NAC) provides optimal conditions for IBR as opposed to SSM, where the NAC has to be reconstructed in a secondary, often challenging procedure which tends to result in a flattened and dissatisfying appearance of the breast mound (4,5). Growing evidence suggests that NSM is safe to perform when the NAC and skin is not affected by tumor (5-10). We have regularly performed NSM and IBR for the past 4 years on oncologic as well as risk reducing indication.

We present our initial experience performing NSM on a selected group of patients using hydrodissection in combination with an inframammary incision and illustrate the technical aspects of the procedure performed as presented in the attached video (Figure 1). 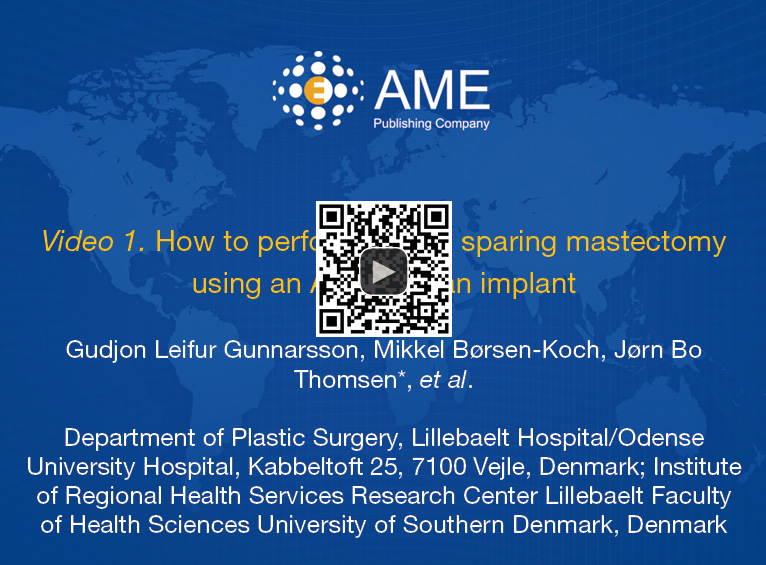 The study population consisted of 20 women aged 23-53 who were referred after genetic consultation for bilateral risk-reducing mastectomy. Included patients had NSM and IBR using the same method, presented in this paper, at Vejle Hospital in Denmark and Telemark Hospital in Norway between September 2012 and July 2014.

The patients consented to surgery after oral and written information. Patient selection criteria were based on previously reported findings (12), including only healthy patients without major comorbidity. The exclusion criteria were hypertension, diabetes, active smoking and previous chest radiation therapy. Data was collected retrospectively by revision of charts and supplemented by patient interviews when the information was insufficient or ambiguous.

The breast footprint was marked using a permanent marker with the patient in the upright position. The planned inframammary crease incision was then drawn below the nipple extending 8-9 cm laterally. The expected projection of the planned breast reconstruction was estimated from measurements of the breast, degree of ptosis and laxity of the skin.

The surgical technique is illustrated in the video: “How to perform a NAC sparing mastectomy with an ADM and an implant”.

A preoperative dose of intra venous antibiotics was given as a standard. Following application of local anesthesia, the skin was incised at the inframammary crease marking. The breast gland was dissected of the pectoralis major muscle and thoracic wall in the subglandular plane using a monopolar cautery. The subglandular cavity was subsequently palpated to ensure that this level had been reached in the entire breast circumference. The breast was then infiltrated with a solution of 1 liter NaCl/ 1 mL epinephrine using a blunt tip cannula immediately below the subcutaneous fascia. The non-dominant hand was used to palpate the movement of the cannula ensuring infiltration in the correct plane.

Correct infiltration is paramount and the cannula should slide freely without resistance as this may indicate displacement of the tip into the wrong dissection plane. However the regions lateral and cranial to the NAC contain more fibrous tissue connecting the cutis and subcutis, and can be challenging to infuse correctly.

The dissection of the glandular tissue commenced at the level of the subcutaneous fascia using combined blunt and sharp scissor dissection. The tissue beneath the NAC as well as the fibrous adhesions laterally to the NAC were cut by careful, sharp dissection removing the entire glandular tissue en bloc through the inframammary incision, and marking it for pathologic evaluation in a standard manner.

The cavity was inspected and palpated to ensure that the ablative surgery had been performed correctly and any excess tissue underneath the subcutaneous fascia was removed, guided by vision. A subdermal, avascular dissection plane is readily found beneath the areola. The underside of the NAC was checked by eversion through the inframammary crease to make sure that no glandular tissue remnants were left behind. In all cases, the underside of the nipple was biopsied for separate histopathology and finally the cavity was checked for sufficient hemostasis.

The skin quality and viability was evaluated prior to reconstruction. The pectoralis major muscle insertion was released inferomedially using a monopolar cautery, as for a dual-plane breast augmentation, to allow partial muscular coverage of the implant.

Extended implant coverage was created using a hammock of acellular dermal matrix (ADM) (12,13). The ADM was sutured to the inferior edge of the muscle and the desired position of the inframammary crease. Implant selection was based on breast footprint measurements, skin quality, as well as the patient’s wishes for size and projection. Two drains were placed, one at the inframammary crease and the other pointing towards the axilla. The reconstruction was finalized suturing the skin in two layers using absorbable 3-0 sutures.

Drains were removed when the daily output was less than 20 mL. Oral antibiotics were administered until all drains were removed. After discharge, patient follow-up was conducted in the outpatient clinic.

We achieved the reconstructive goal for all 40 breasts (100%) (Figure 2). There were no cases of NAC necrosis, neither partial nor complete. Minor complications were registered in two reconstructions (5%), one case of small partial necrosis and one case of wound dehiscence. 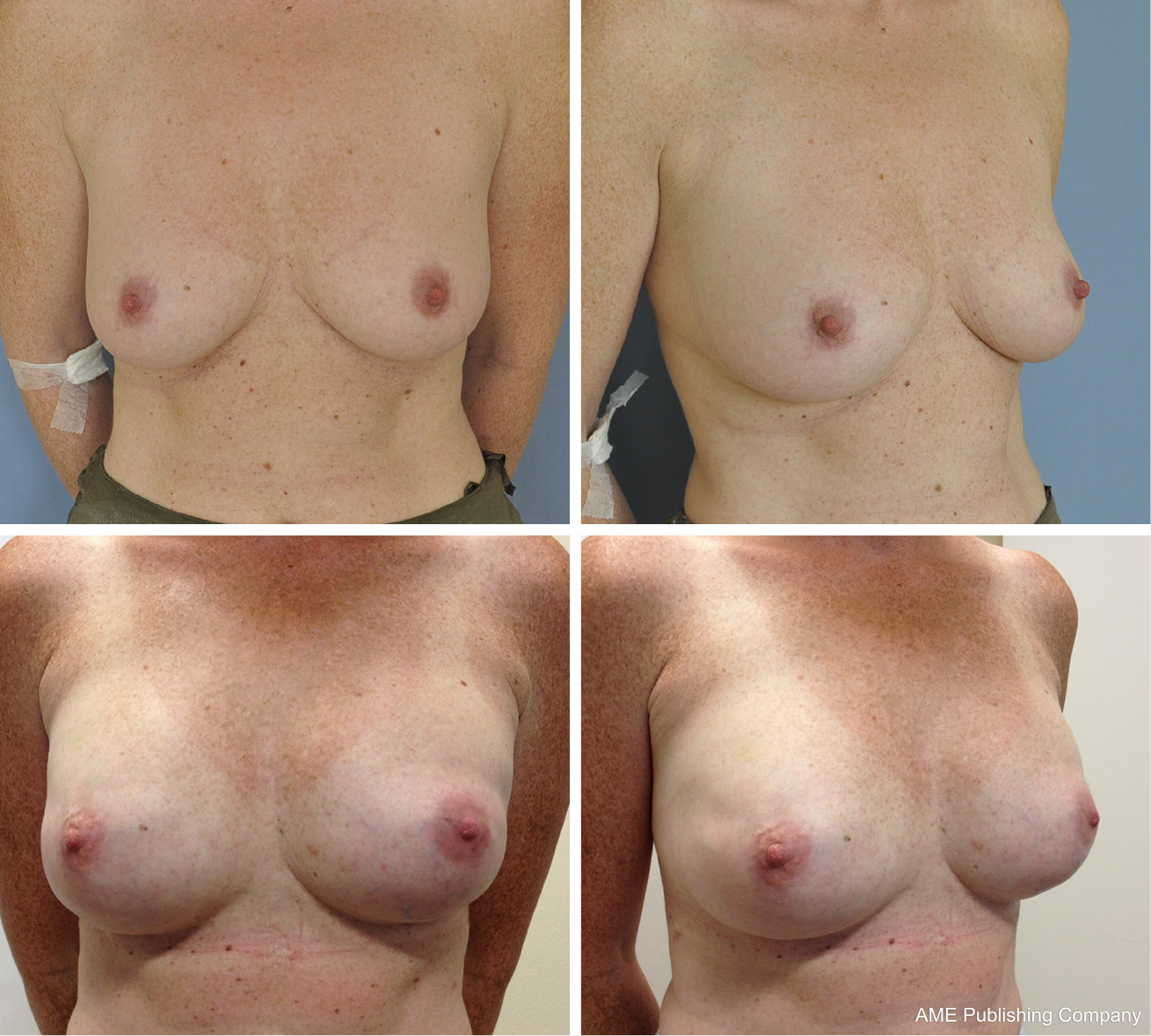 Figure 3 Before and after direct NSM and immediate breast reconstruction showing that the reconstructed breast is often bigger than prior to surgery because the skin envelope has to be filled out by the implant to create a correct NAC placement. NSM, nipple sparing mastectomy. 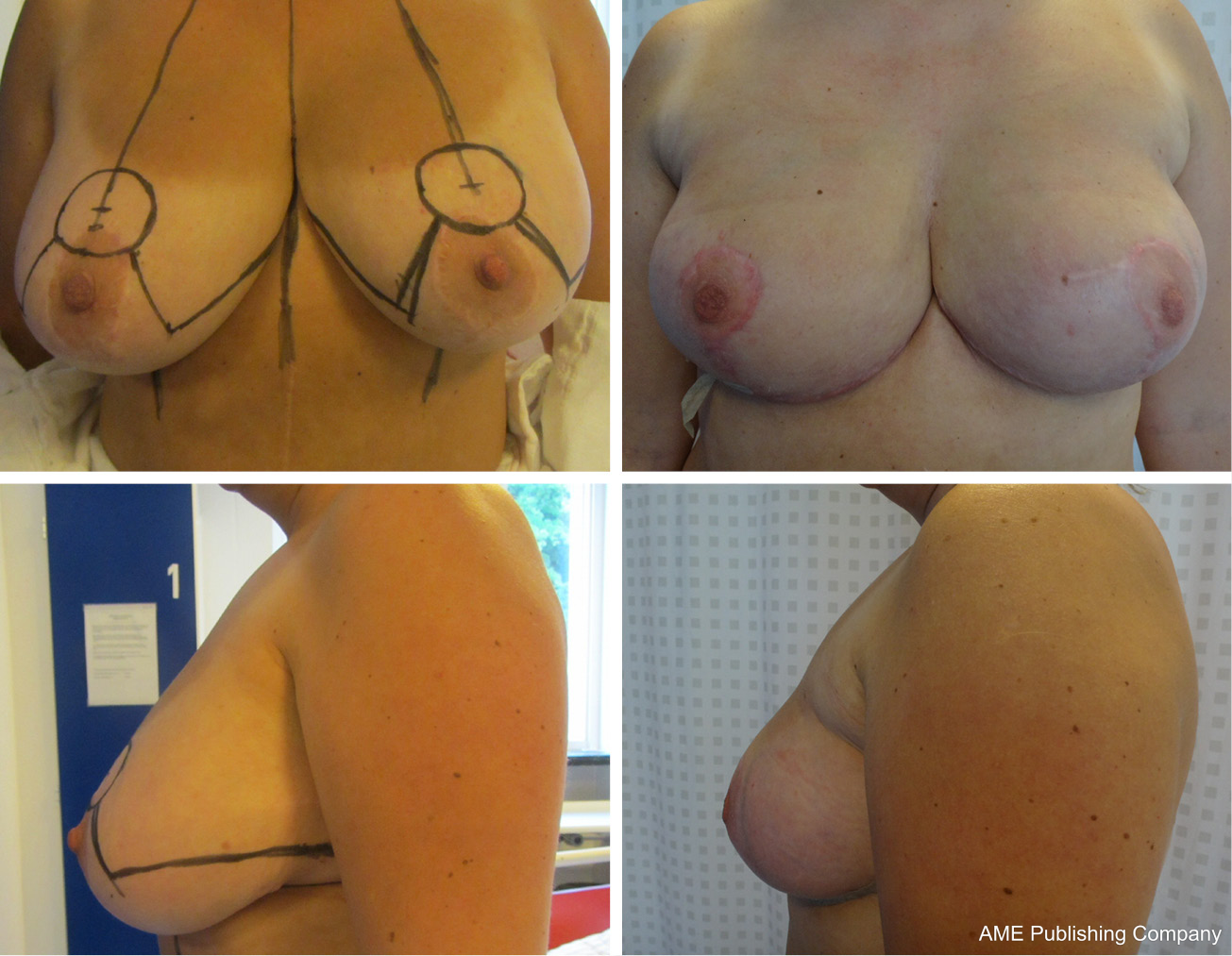 We have performed risk-reducing NSM and IBR since 2011 using hydrodissection in combination with different incisions and approaches. In this series focusing on the inframammary crease approach, reconstructive goals were achieved in all of the planned cases without any major complications. Two minor complications occurred; in the first case, ADM’s were not available and the reconstruction was achieved using silicone implants and marionette suture fixation of the pectoralis muscle over the implant upper pole, as previously described by Spear et al. (14) (Table 1). The patient suffered compression necrosis of the lower pole due to the tight bandage covering the sutures. She made an uneventful recovery in 3 weeks. In the other case the patient developed a blister due to wound dehiscence at the inframammary crease. The wound margins were revised under sterile conditions and the patient made a full and uneventful recovery. 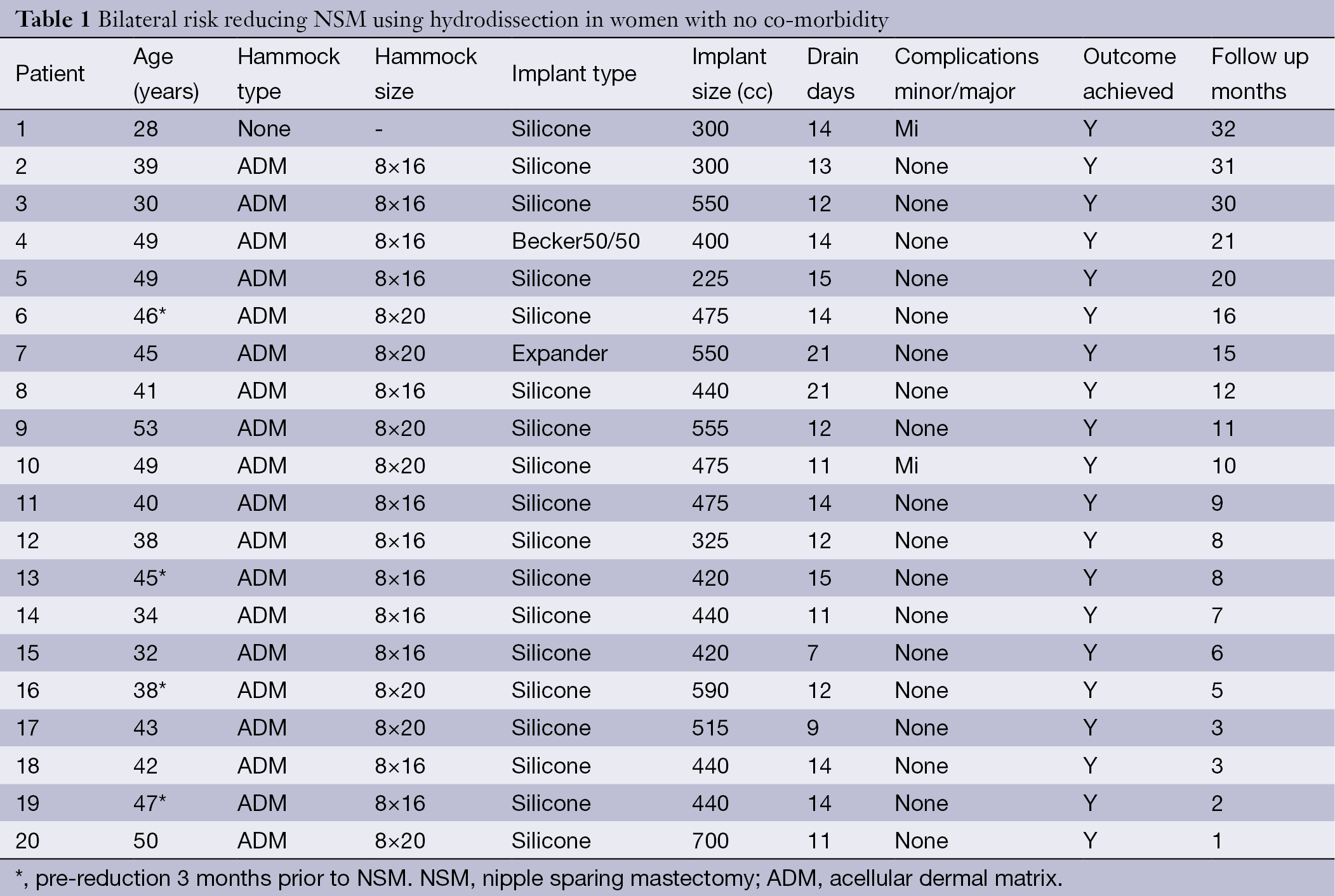 We prefer the inframammary crease approach which in our experience results in a more optimal reconstruction. This technique may appear challenging at first, however, plastic surgeons are familiar with both the inframammary approach and the subglandular dissection. Consequently, the procedure is a joint team effort performed simultaneously by a breast surgeon and a plastic surgeon. This teamwork leads to an ongoing and important discussion about skin thickness, trying to balance ablative and reconstructive surgery in a way which ensures removal of sufficient tissue, and at the same time sustaining blood supply for the remaining skin flaps for reconstruction. When we are able to identify the superficial fascia, we use this as our dissection plane. However, as described recently in a review by Robertson et al., the superficial fascia is readily identified in just 56% of patients (15). When the fascia is not well identified the dissection plane is based on team experience. We have not measured the thickness of the skin flaps of the studied patients. However, we found that the skin flaps varied between patients and we estimate the variation was between 4 to 8 mm.

The most recent and largest reported series on NSM by Colwell et al. based on 500 procedures supports our findings stating the importance of patient selection and that inframammary crease incision persistently produces better results and fewer complications (16). A lateral inframammary crease incision in combination with hydrodissection, similar to our technique, has been described earlier by Blechman et al. (17). Our incision is more medially placed and the patient sample more homogenous.

It seems that skin and nipple survival can be optimized by correct patient selection and lower the risk of reconstructive failure and cancer recurrence (9,12,18,19). Oncological safety is an important issue when performing NSM and IBR. However, risk-reducing NSM and IBR can be regarded oncologically safe (6,8). Reported evidence, after 5-15 years follow-up, shows that there does not seem to be an increased risk of recurrence in patients treated by the nipple sparing technique compared to other approaches. Thus the procedure does not seem to increase the risk of tumor recurrence or decreased survival compared to other ablative methods (6-10). The use of ADM in primary breast reconstruction is well established and as in other techniques, patient selection is a key element to a successful result (12,13). The most important selection criteria are breast size and comorbidity as described above. A large ptotic breast cannot be reconstructed using this NSM technique in a satisfactory manner. Pre-shaping or the pre-reduction/mastopexia can be offered to patients undergoing risk-reducing procedures as a safe alternative as described by Spear et al. (20). Pre-shaping seems to cause a delayed effect by increasing the dermal vascularity of the NAC, which increases the chance of survival after the subsequent mastectomy and reconstruction (21).

Bilateral risk-reducing NSM and IBR can be performed successfully through an inframammary crease incision in combination with hydrodissection. Critical patient selection is the key to a successful outcome.