Ovarian cancer represents the most lethal malignancy of the female genital tract (1). Even in cases of optimal initial treatment, the majority of the affected patients will experience a relapse (2), and the probability of recurrence is almost certain in case of advanced-stage disease at initial diagnosis.

Retrospective reports have strongly suggested that, in case of recurrence of ovarian cancer, radical secondary cytoreduction is beneficial to the patients and prolongs survival if no macroscopic disease is left at the end of surgery (3-7). These assumptions have been recently questioned by a large randomized trial promoted by the Gynecologic Oncology Group (GOG-213), in which the benefit of secondary surgery was only on disease-free survival and not on overall survival (8). The results of the GOG-213 have been strongly criticized, mainly because of the low rate of complete cytoreduction (63%) in patients assigned to secondary surgical effort. In 2018, the preliminary results of another randomized trial (the DESKTOP-3) have been presented at the ASCO meeting (9): with a higher rate of complete surgical eradication (74%) the trial showed a survival advantage of a secondary surgical effort in patients with ovarian cancer relapse. However, data from this trial are still immature and final reports are awaited.

A relevant and partially different issue is the occurrence of lymphatic relapses: the complete eradication of them has been shown to be associated with a substantial improvement in patients’ prognosis and represents a widely accepted indication to perform surgery (10-12).

Regardless of all the debates on these topics, surgical secondary cytoreduction (SSC) is considered an important option in case of ovarian cancer recurrence (3). As for upfront surgery, the possibility to perform SSC by laparoscopy or robotics has been taken into consideration because of the well-known beneficial effects of minimally-invasive surgery on intra-operative blood-loss, risk of transfusions, rate of peri-operative complications and post-operative recover, including a shorter time to initiation of adjuvant chemotherapy (13-29). Few reports have investigated the role of minimally invasive SSC, and even less have compared endoscopic techniques to traditional open surgery (10,30,31). The aim of this review has been to investigate in depth the role of minimally invasive surgery (MIS) in the setting of secondary cytoreduction in case of ovarian cancer recurrence, and to summarize the available evidence and possible indications for MIS in this setting. We present the following article in accordance with the PRISMA reporting checklist (available at http://dx.doi.org/10.21037/gs-20-353).

This review was performed according to the PRISMA statement and was registered in the PROSPERO register (CRD42020173156).

A reference librarian with expertise in electronic search strategies for systematic reviews conducted the literature search in conjunction with a senior gynecologist (SU). PubMed, ClinicalTrials.gov, Scopus and Web of Science databases were systematically searched for records from January 1st 1989, to January 1st 2020.

No institutional review board approval was required, because the present study deals with already existing data. All authors participated in the search strategy design and in the definition of the inclusion and exclusion criteria.

The final literature search was performed in February 2020, using the following strings: “ovarian neoplasm” or “ovarian cancer” or “ovarian malignancy” AND “secondary cytoreduction” or “recurrence” or “relapse” or “failure” and “laparoscopy” or “robotics” or “minimally-invasive surgery”.

Eligibility assessment was performed independently by two reviewers (SU, PCZ). All pertinent articles were carefully evaluated. Full manuscripts were obtained for all selected articles, and the decision for final inclusion was made after a detailed examination of the paper. To avoid missing any relevant publication, a manual search of the reference lists of the retrieved studies and review articles was performed. We included only studies written in English and describing the use of laparoscopy or robotics for secondary surgical cytoreduction for recurrent ovarian cancer. Abstract at conferences not followed by full-text articles were not considered. Published cases incorporated in subsequent series were excluded. Only cases of secondary cytoreduction were included (therefore cases of tertiary or quaternary cytoreduction were excluded). In case of any disagreement between the two reviewers regarding the inclusion of studies, a third author (MPF) was asked to take the final decision.

Only studies including patients with epithelial ovarian malignancies were considered. The literature search (Figure 1), based on our predefined key search items, identified 617 publications after adjusting for duplicates. 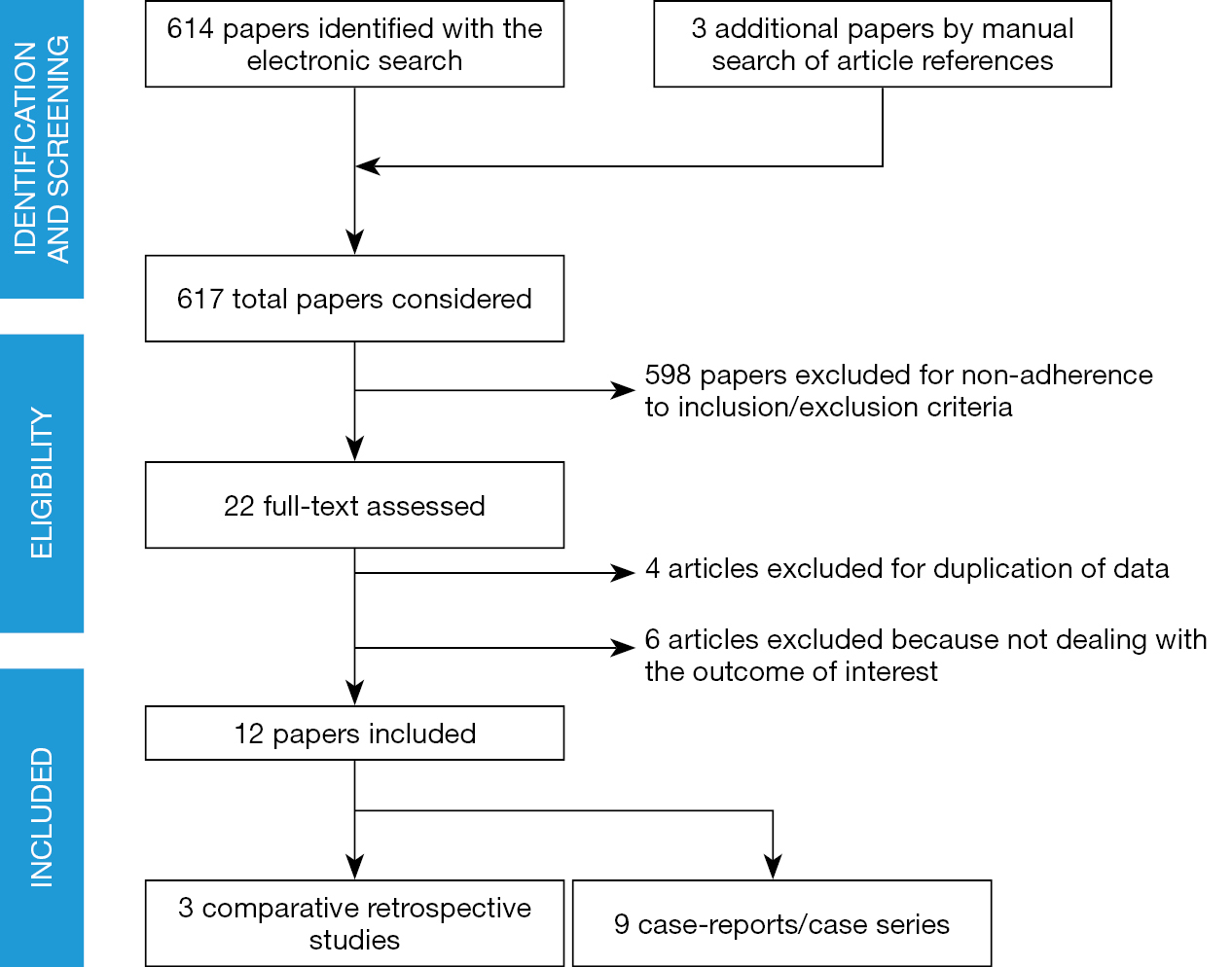 A total of 12 articles including 372 patients were identified. Three studies compared 69 patients who underwent MIS SSC vs. 112 cases of open abdominal SSC. Other 9 articles described a total of 191 patients who had minimally invasive secondary cytoreduction for recurrent ovarian cancer without comparison with traditional open treatment. Overall, the number of patients reported in the literature who received MIS debulking for relapse of ovarian cancer is 260.

The quality of the evidence is definitely low, being based on 3 retrospective comparative studies, 6 retrospective case series and 3 case reports. In all cases, only selected patients underwent MIS for SSC. No clear criteria to identify cases suitable for laparoscopic or robotic debulking were adopted and the decision was left to surgeon’s discretion; in general, we noticed that the candidates to MIS had single-site disease or few localizations of relapse. Only 3 studies (31,33,34) provided details regarding the performance status of patients included; when mentioned, only patients in good performance status (0 to 2) were included.

The three available studies comparing MIS to open surgery included both cases of laparoscopic and robotic SSC (33,35,36). Two of the three studies provided oncological outcomes (35,36). The study by Eriksson et al. (36) did not describe in detail the type of surgical procedures performed. 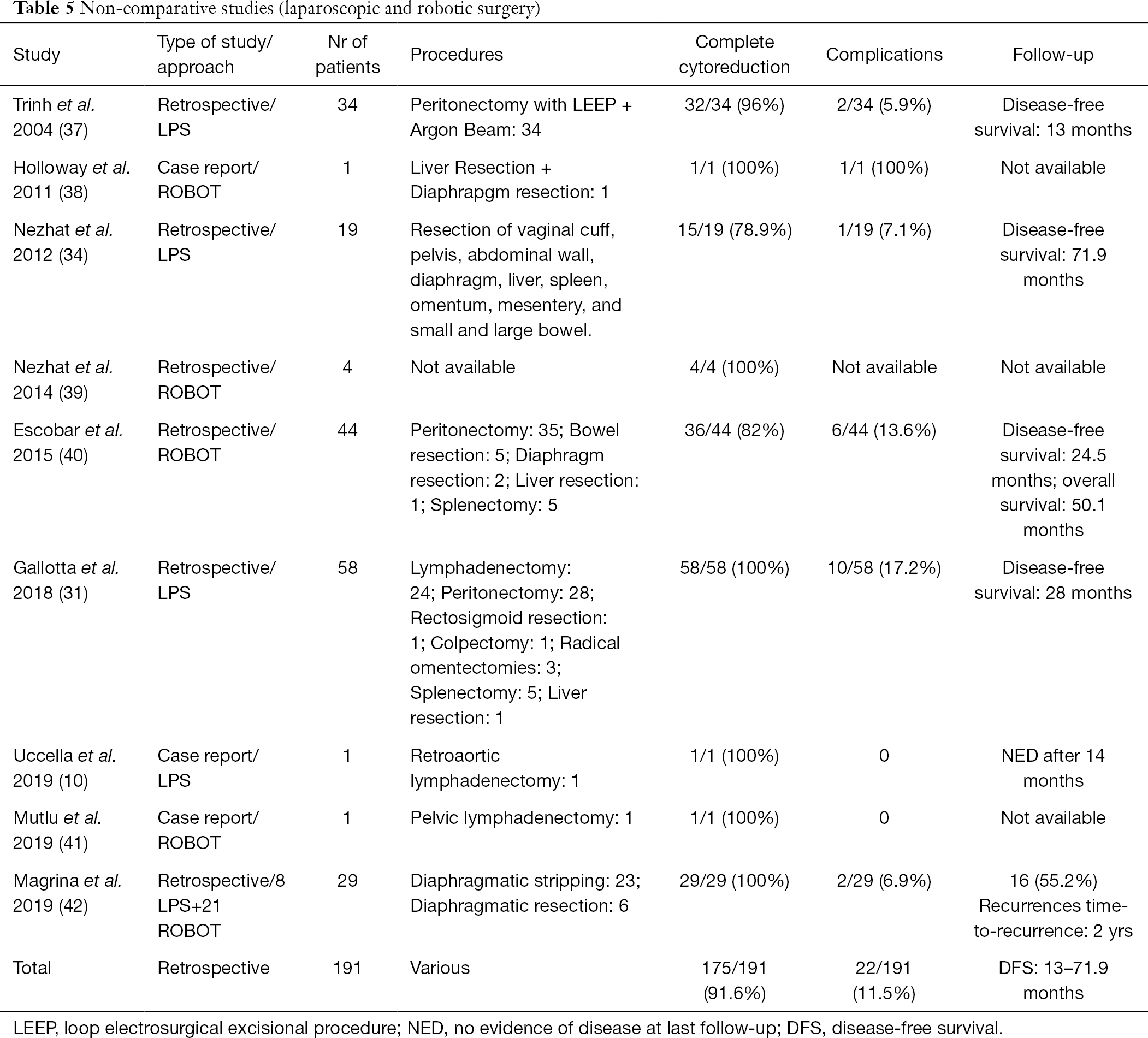 Nine reports for a total of 120 laparoscopic and 71 robotic cases of SSC have been described in non-comparative literature (10,31,34,37-42). Several types of surgical procedures have been reported, including liver resection, bowel resection, diaphragmatic resection, splenectomy, and extended peritoneal stripping. The rate of complete cytoreduction to no residual tumor is high (91.6%) and the risk of complications is low 11.5%.

Survival outcomes, although limited by the study design and possible reporting bias, are extremely encouraging, with disease-free survival ranging between 13 and 71.9 months.

As mentioned, there is no consensus on the criteria to select patients for laparoscopic or robotic secondary cytoreduction. However, all the available series point out that only localized disease is suitable for MIS approach. Ideally, a diagnostic laparoscopy, combined with preoperative imaging may provide adequate evaluation of the peritoneal cavity to confirm or discourage MIS (43).

Intra-operative ultrasound has been proposed as a possible tool for better identification of localizations and recurrence of ovarian cancer and for improved tailoring of SSC (44,45). Mascilini et al. in 2018 have described a series of 51 MIS debulking procedures for recurrent ovarian cancer; among them, intraoperative ultrasound allowed proper identification of recurrence and confirmation of complete resection in 25% of cases, thus extending the applicability of minimally invasive technique and reducing the need for open surgery (44).

The summary of the evidence, with the main results of this review and the implications for research are summarized in Table 6.

MIS has been proposed for more than one decade in the treatment of both early and advanced ovarian cancer at the time of primary diagnosis (13-24). Interestingly, the role of laparoscopy appears crucial in the development of new strategies such as sentinel node biopsy for disease macroscopically limited to the ovary at upfront surgery (13,15,17-19). Although much less investigated, laparoscopic and robotic surgery have been used also in complex procedures for primary interval debulking surgery (14).

The use of MIS in secondary cytoreduction has been very scarcely explored and the available evidence is of low quality. The reasons for this paucity of data is due to: (I) uncertainties regarding the role of secondary surgical cytoreduction in ovarian cancer; (II) the technical difficulties of MIS in this setting; (III) unclear criteria to select patients.

Surgery for advanced ovarian cancer is associated with a high risk of complications due to the widespread disease and the poor preoperative nutritional status of the patient (46-50). In case of recurrent ovarian cancer with localized relapses, MIS may at least theoretically be of great benefit to the patients, because it reduces the surgical trauma and enhances recovery after surgery. A particular subset of patients who may benefit more from MIS approach is represented by subjects with lymphatic failure. Outcomes in this particular subset of patients appear extremely favorable both in terms of peri-operative results and long-term survival (10,43,51).

The use of pre-operative laparoscopic exploration and intra-operative ultrasound may enhance the ability to select patients and, at the same time, may improve the ability to radically resect the disease without opening the abdomen with a wide surgical incision (43).

Inevitably, MIS requires a high level of expertise and skills when applied to the field of recurrent ovarian cancer and it should be performed only in oncological centers with adequate background in complex surgical procedures.

(I) The inherent bias deriving from the type of the studies included. No randomized trials are available and the cases undergoing MIS are inevitably more favorable than those submitted to laparotomy. This imbalance negatively affects the conclusions of the published series. The reduced amount of evidence as well as its low quality should encourage researchers to adopt this approach in the context of well-designed, possibly prospective clinical trials, in order to provide more reliable knowledge on this issue.

(II) The exclusion of articles dealing with tertiary or quaternary MIS cytoreduction. However, the number of cases in which MIS was adopted for second or third relapse of ovarian cancer was so low that it may be regarded as anecdotical.

In conclusion, ovarian cancer still represents a difficult diagnostic and therapeutical challenge (52). MIS should be considered as a possible alternative to laparotomy for SSC of recurrent ovarian cancer in highly selected cases, at dedicated oncological centers and possibly in the context of well-conducted scientific research.

Provenance and Peer Review: The article was commissioned by the editorial office, Gland Surgery for the series “Ovarian Cancer Recurrence”. The article has undergone external peer review.

Reporting Checklist: The authors have completed the PRISMA reporting checklist. Available at http://dx.doi.org/10.21037/gs-20-353

Conflicts of Interest: All authors have completed the ICMJE uniform disclosure form (available at http://dx.doi.org/10.21037/gs-20-353). The series “Ovarian Cancer Recurrence” was commissioned by the editorial office without any funding or sponsorship. SC serves as an unpaid editorial board member of Gland Surgery from Aug 2019 to Jul 2021 and served as the unpaid Guest Editor of the series. The authors have no other conflicts of interest to declare.