The effectiveness, risks and improvement of laparoscopic pancreaticoduodenectomy during the learning curve: a propensity score-matched analysis

Some studies have considered the effect of the learning curve for LPD on postoperative outcomes (2,5,7-12). A study of patients identified from the US National Cancer Database indicated that the 30-day mortality rate after LPD was related to the volume of the surgery center, whereby the mortality rate was higher at lower-volume centers (<10 LPDs annually) (10). A multicenter study in China showed that OT, estimated intraoperative blood loss, and mortality in patients treated with LPD were associated with the surgeon’s experience. The risk of surgical failure was reduced by higher hospital, department, and surgeon volume, and increased surgeon experience (12).

This retrospective, cross-sectional study was performed at the Fujian Provincial Hospital, which is affiliated to Fujian Medical University, between September 2016 and August 2019. The study was conducted in accordance with the Declaration of Helsinki (as revised in 2013), and the protocol was approved by the institutional review board at Fujian provincial hospital (ID: K2019-04-002). And informed consent was taken from all the patients.

Inclusion criteria were (I) ≥18 years old; (II) a diagnosis of a resectable malignant or borderline malignant carcinoma of the pancreatic head (stage I and II pancreatic cancer), distal common bile duct, or periampullary region according to the National Comprehensive Cancer Network (NCCN) Guidelines; and 3) treated with OPD or LPD.

In accordance with institutional practice guidelines, all patients underwent routine hematology, biochemistry, and oncology testing. Abdominal thin-slice (3 mm) CT was used to identify the size and location of the lesions. All surgical procedures were performed by an assigned surgical team led by a board-certified attending general surgeon experienced in both open and laparoscopic surgery.

On postoperative Day 1 or 2, the nasogastric tube was removed, and patients were frequently fed small amounts of a low-fat soft, solid diet, if well tolerated. Plasma glucose was closely monitored, and intravenous insulin was administered for management of hyperglycemia. On postoperative Day 5, the amylase concentration in the peritoneal drainage fluid was measured, and the drain was removed if there was no apparent pancreatic fistula.

Pancreatic fistula was diagnosed in accordance with the International Study Group for Pancreatic Fistula (ISGPF) criteria (18); a Grade B/C pancreatic fistula was considered clinically relevant. Postoperative morbidities were assessed using the Clavien-Dindo classification system; Clavien-Dindo Grade ≥3 was considered a major complication. MPD in LPD was assessed on a laparoscopic millimeter scale.

Propensity score matching was used to minimize bias caused by variables that could otherwise confound comparisons between OPD and LPD. Outcomes of the matched samples were directly compared to estimate the treatment effect.

This study included 296 unmatched patients. Of these, 113 patients underwent LPD and 183 patients underwent OPD. After propensity score matching, 196 patients were divided into two groups: 98 patients in the LPD group and 98 patients in the OPD group. Covariates were compared between groups, before and after matching (Table 1). Before matching, there were imbalances in pancreatic texture and MPD diameter, which are risk factors for pancreatic fistula, and hypertension and hypoproteinemia. All imbalances were alleviated by matching. 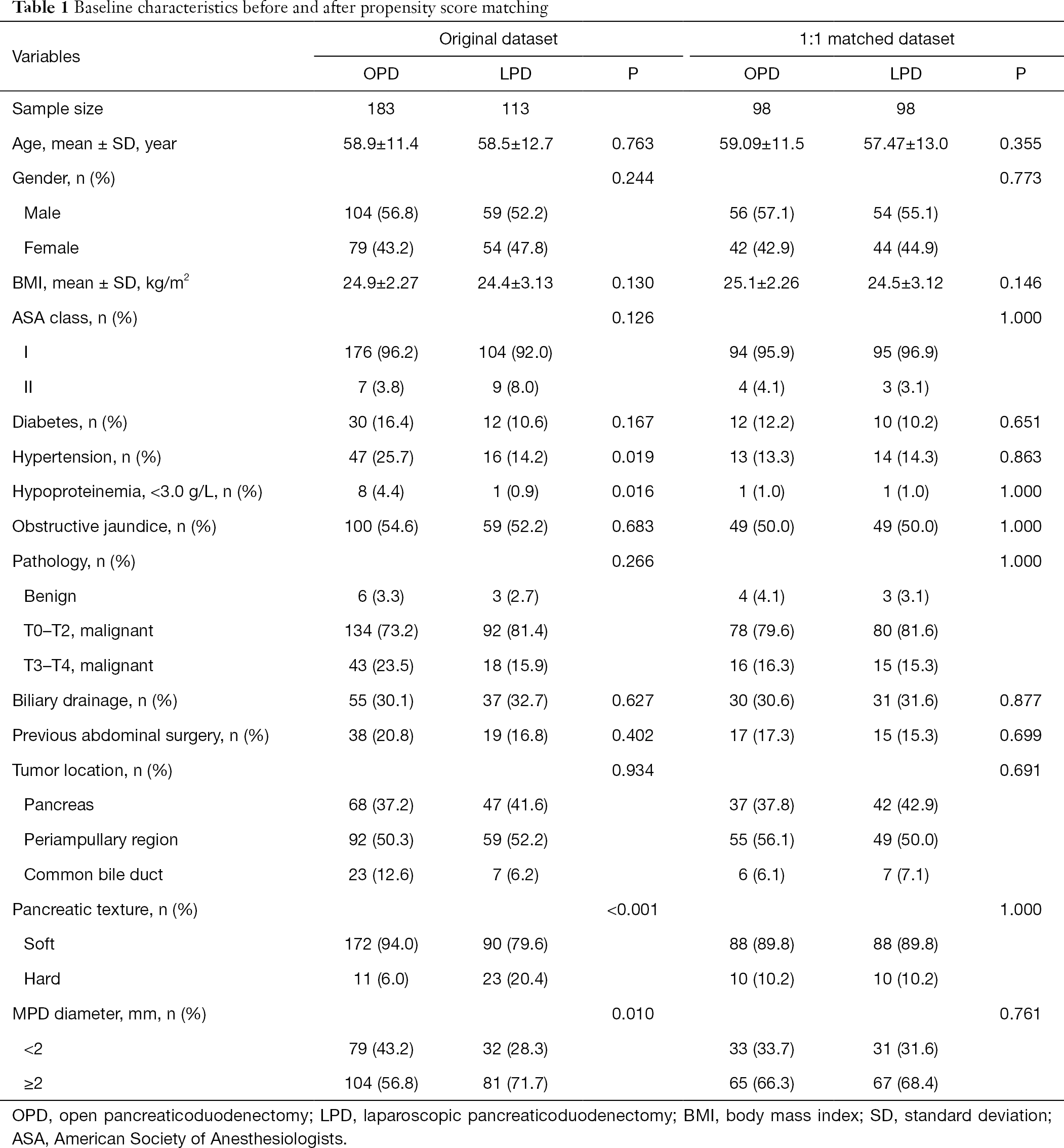 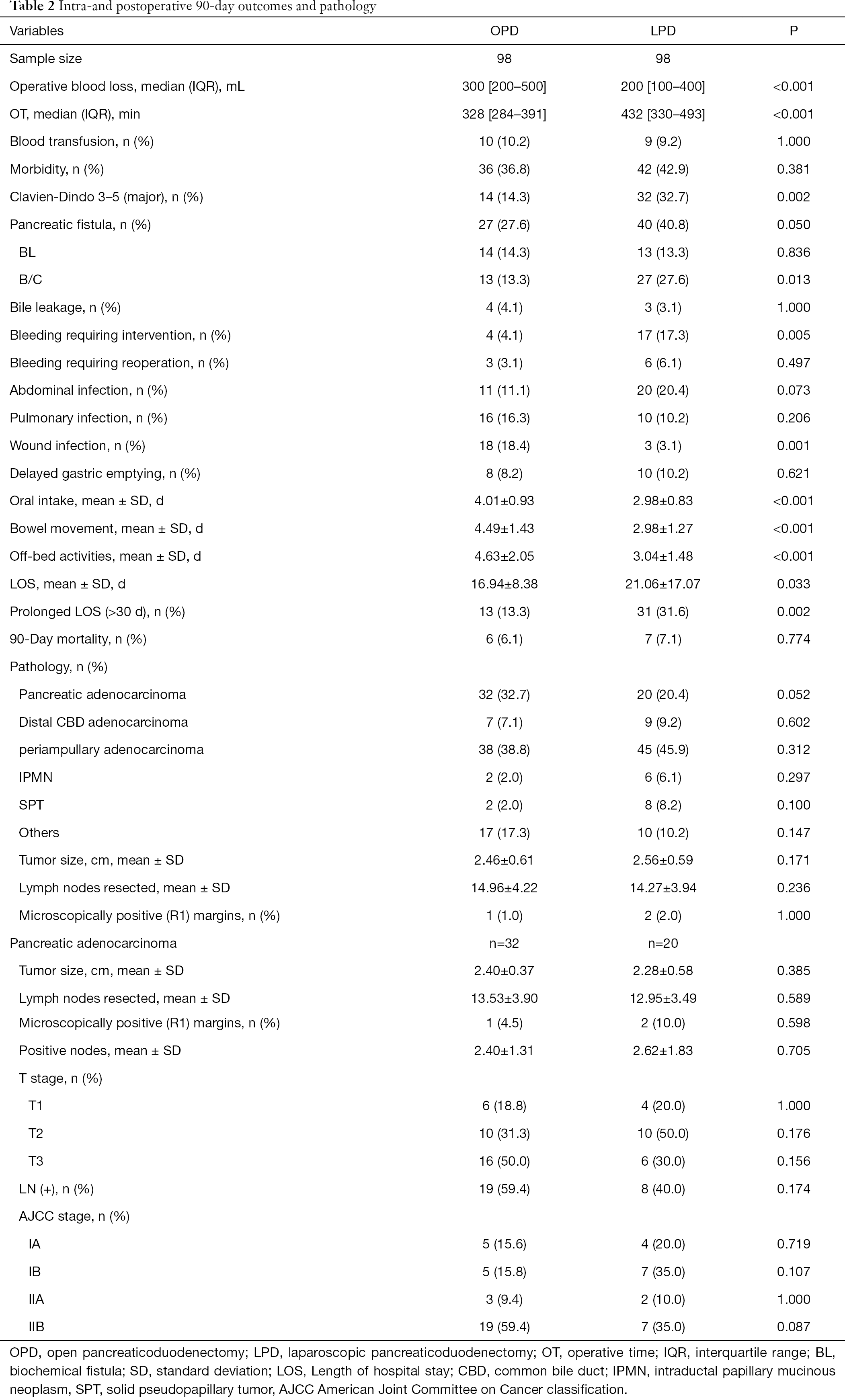 There were no significant differences in pathological variables in all patients included in the OPD and LPD matched groups or among patients with pancreatic adenocarcinoma (Table 2). 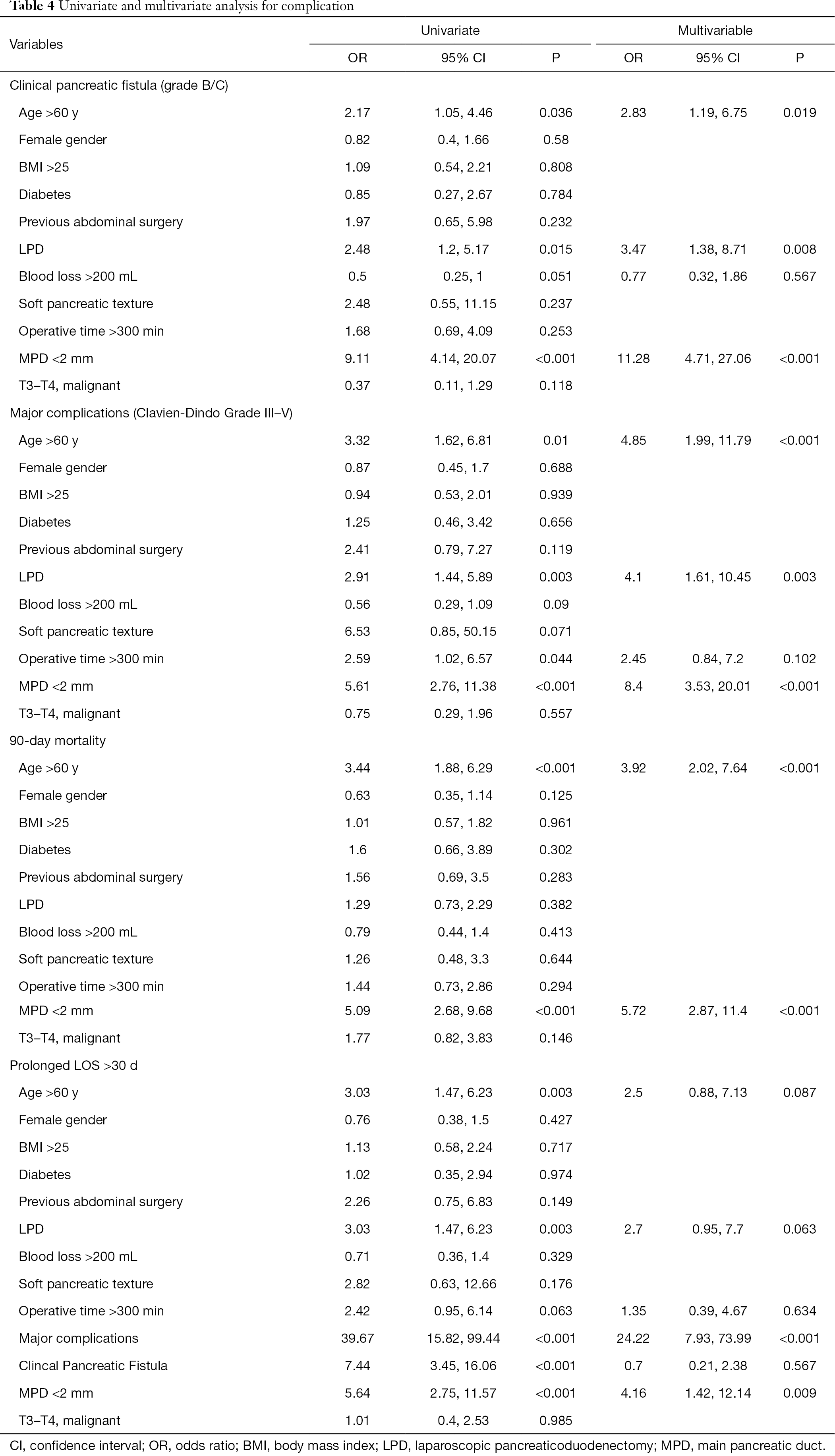 CUSUM-CT analyses for OT and blood loss are shown in Figure 1 and Figure 2. For LPD, there were significant improvements after 34 cases and 65 cases (Figure 1). There were significant dips in the learning curve for OT (Figure 2A, P<0.001) and intraoperative blood loss (P<0.001; Figure 2B). The learning curve for OT appeared to reach the lowest point, suggesting that our surgical teams achieved competence in performing LPD.

Intraoperative and postoperative outcomes were evaluated in patients across three phases of the learning curve for LPD that were delineated by the 34th and 65th case treated. There were no significant differences in the baseline characteristics or pathology in patients treated during the early, middle, or late phases of the learning curve (Table 5). The last 48 patients (late phase) had significantly shorter OT and LOS, lower blood loss, and lower incidence of morbidity, major complications, pancreatic fistula and conversion to laparotomy (all P<0.05), compared to patients treated in the early and middle phases. 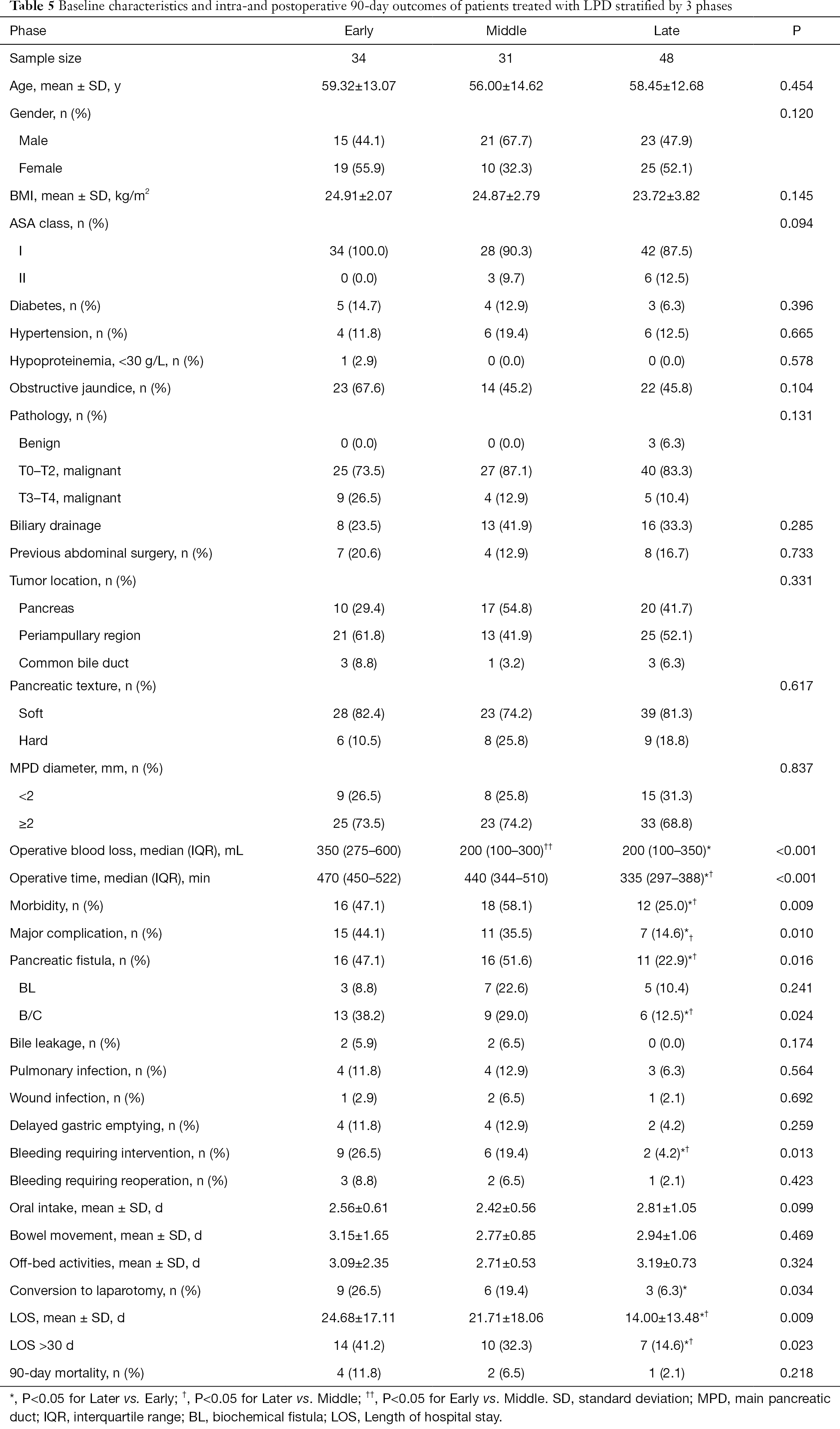 Patients treated with LPD and OPD in the late phase of the learning curve were compared using propensity score matching (Table 6). After matching, there were 43 patients in each group. There were no differences in OT, LOS, and incidence of morbidity, major complications, or clinical pancreatic fistula between groups (all P>0.05).

To the author’s knowledge, this is the first study to compare the safety and efficacy of LPD during the learning curve to OPD. Biases associated with patients clinical characteristics were controlled for using the propensity score–matching method. Based on the outcomes analyzed, CUSUM-CT analysis revealed that the learning curve for LPD consisted of 3 phases.

Matched analyses showed that OT, the incidence of Clavien-Dindo Grade III-IV complications, clinically relevant pancreatic fistula, bleeding that required invention, and prolonged LOS (>30 d), and LOS for patients with major surgery-associated complications were significantly increased in patients that underwent LPD during the learning curve compared to those that underwent OPD. These data indicate that there is a risk associated with LPD during the learning curve. However, the risks that were initially associated with LPD were significantly decreased in the late phase of the learning curve. In addition, intraoperative blood loss, the incidence of surgical site infection, times to resume out-of-bed activities, bowel movements, and oral intake of a low-fat soft, solid diet, and LOS for patients with no or mild surgery-associated complications were significantly lower in patients that underwent LPD.

Previous studies have showed no increase in postoperative complication and mortality rates in patients that underwent LPD compared to OPD (7,19-21). Other reports suggest that the postoperative complication and mortality rates associated with LPD are increased in low-volume centers where surgeons are less experienced in the procedure (10,22-25). A recent multicentre, patient-blinded randomized controlled trial comparing LPD with OPD (LEOPARD-2) was prematurely stopped due to the high rate of complication-related 90-day mortality in the LPD group (26,27). Importantly, none of the inclusion criteria for these aforementioned studies required surgeons to have passed the learning curve for LPD, which had obvious implications for patient outcomes.

The learning curve for LPD has been investigated in several studies. One retrospective study of LPD conducted at a high-volume centre showed decreased OT from 9.8 h for the first 33 patients to 6.6 h for the last 40 patients in 100 patients, but the learning curve analysis of this study was not using CUSUM-CT method (28). Wang et al. reported there were two peak points in their learning curve assessed by the CUSUM method, which were observed at the 11th and 31st cases; however, the sample size of this study was small (3). A retrospective multicentre study of LPD in China demonstrated the learning curve had 3 phases, with proficiency thresholds at 40 and 104 cases; however, this study lacked a comparison of efficacy between different phases, and had not compared LPD and OPD data during the same period (12). Some other studies used CUSUM analysis to find that the OT of LPD decreased with experience are similar to this study (2,29). Our study had two features distinguishing it from previous reports. Firstly, we objectively determined improvement in intraoperative and postoperative outcomes during the learning curve for LPD by a large sample size. Findings confirmed that the learning curve for LPD had 3 phases. There was a significant decline in the OT, LOS, and incidence of postoperative complications or clinically relevant pancreatic fistula across the three phases, suggesting that improvement in surgical performance over time has a beneficial effect on patient outcomes. Secondly, although overall effectiveness of LPD during the learning curve was not as good as OPD, the efficacy of LPD approached that of OPD in the later stages of the learning curve for LPD. Our results raise concern about the effectiveness of LPD performed by less experienced surgeons in clinical practice, but should encourage them to learn the procedure. It may be advantageous to shift the learning curve from patient treatment to preclinical simulation training that encompasses early stage and more advanced pancreatic cancer cases (26).

In the present study, there was no significant difference in 90-day mortality in patients that underwent LPD during the learning curve or OPD. Age >60 years and a non-dilated MPD were significant predictors of postoperative 90-day mortality. Taken together, our data suggest that elderly patients and patients with a non-dilated MPD should not be treated by LPD performed by surgeons operating during their learning curves, especially in the early phase.

Data from this study raise awareness of the need to ensure safety and improve the effectiveness of LPD during the learning curve, and provides guidance for centres introducing LPD to manage cancers of the pancreas. However, this study was associated with several limitations. First, there were limitations inherent to any retrospective non-randomized study. Although we used propensity score matching to minimize bias, there were still unknown confounders that might have affected outcomes. Second, our study was a single-center study, while previous research has been conducted at multiple sites (12); but our results are relevant for high-volume centers (24,25).

Findings from this study showed that OT, incidence of major surgery-associated complications, and LOS were significantly increased in patients that underwent LPD during the learning curve compared to those that underwent OPD. These outcomes improved and approached those achieved with OPD in the later stages of the learning curve for LPD. We propose that elderly patients and patients with a non-dilated MPD should not be treated by LPD performed by inexperienced surgeons.

The authors thank all of the participating patients and their families, as well as the investigators, research nurses, study coordinators, and surgical staff.

Reporting Checklist: The authors have completed the STROBE reporting checklist. Available at http://dx.doi.org/10.21037/gs-20-98

Conflicts of Interest: All authors have completed the ICMJE uniform disclosure form (available at http://dx.doi.org/10.21037/gs-20-98). The authors have no conflicts of interest to declare.

Ethical Statement: The authors are accountable for all aspects of the work in ensuring that questions related to the accuracy or integrity of any part of the work are appropriately investigated and resolved. The study was conducted in accordance with the Declaration of Helsinki (as revised in 2013), and the protocol was approved by the institutional review board at Fujian provincial hospital (ID: K2019-04-002). And informed consent was taken from all the patients.