The incidence of thyroid cancer (TC) has increased dramatically around the world in recent decades. Papillary thyroid carcinoma (PTC) is the most common type of TC, accounting for nearly 85% (1-3). With the development of diagnostic technology, an increasingly number of papillary thyroid microcarcinoma (PTMC) was detected, which defined as tumor with a maximum diameter ≤10 mm (4,5). The majority of PTMCs have an indolent disease course and excellent prognosis. However, some PTMCs with lateral lymph node metastasis (LNM) or distant metastasis show an aggressive course, which can cause poor disease-free survival (6-8).

Compare with PTC, PTMC patients tend to skip metastasis and exhibit more frequent multifocality (16,17). To our knowledge, there have few studies to investigate the predictive factors for level V metastasis. Moreover, the benefits and clinical risks of routine level V dissection are uncertainty. Therefore, this study aimed to explore the incidence, pattern and clinical predictive factors for level V metastasis in N1b PTMC patients and attempt to provide a rational management of lateral neck dissection in treatment for N1b PTMC patients. We present the following article in accordance with the STROBE reporting checklist (available at http://dx.doi.org/10.21037/gs-20-232).

This study retrospectively reviewed the clinical records of 6,621 patients who underwent thyroidectomy from September 2016 to July 2019 at our center. After strict inclusion and exclusion criteria, a total of 114 patients met the requirements (Figure 1). Inclusion criteria as follows: (I) N1b PTMC patients with complete medical records; (II) underwent total thyroidectomy with bilateral central neck dissection and modified radical neck dissection (MRND), and postoperative histopathology confirmed PTMC with lateral LNM. The exclusion criteria for this study were as follows: (I) history of thyroidectomy; (II) benign node and other types of TC, such as follicular cancer, medullary cancer and anaplastic cancer etc.; (III) distant metastasis; (IV) selective lateral neck dissection or level I dissection. No robotic or endoscopic thyroidectomy was conducted in the enrolled patients. The study was conducted in accordance with the Declaration of Helsinki (as revised in 2013). The study was approved by the Ethics Committee of Xiangya Hospital Central South University (No.: 201901006) and informed consent was taken from all the patients. 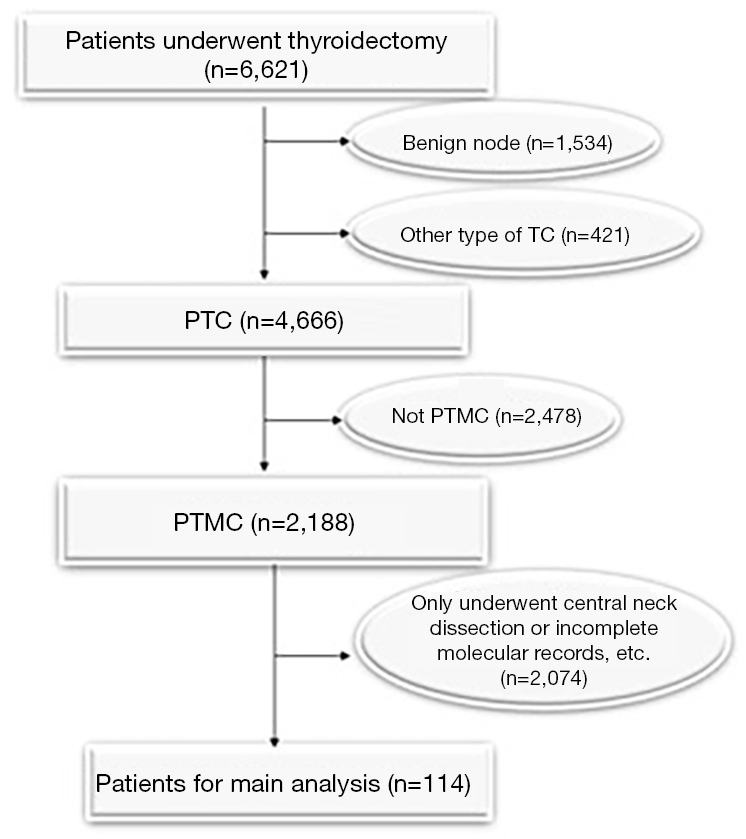 Physical examination, ultrasound (US), enhanced computed tomography (CT) and fine needle aspiration biopsy (FNAB) were routinely performed in this study to assess the cervical lymph nodes and thyroid nodules before surgery. MRND was performed after total thyroidectomy and central neck dissection, the extent of MRND encompasses levels II–V, with sparing the sternocleidomastoid muscle, internal jugular vein, spinal accessory nerve and other important structures (external jugular vein, Musculus omohyoideus and cervical plexus) (18). The lateral compartment delimited inferiorly to the subclavian vein, superiorly to the sublingual nerve, and lateral to the anterior edge of the trapezius muscle. All dissected lymph node specimens were recorded according to the cervical regions, and sent to the Department of Pathology at Xiangya Hospital, the histopathological evaluation of these specimens was conducted by two or more pathologists with at least 8 years of experience and diagnosed more than 400 PTC cases. Thyroid stimulating hormone (TSH) suppression therapy with or without radioactive iodine 131 was conducted after the initial surgery. In this study, all patients received regular follow-up within 1 month and then every 3 months for the ﬁrst year. Physical examination, US, thyroglobulin (TG), TGAb, TSH, free triiodothyronine, free thyroxine were measured at every outpatient visit.

The clinicopathological variables included sex, age, solitary/multifocal lesions, primary tumor size, bilaterality, capsular invasion, Hashimoto’s thyroiditis (HT), extrathyroidal extension (ETE), lymph nodes were harvested from the neck dissection specimens by different cervical regions. To distinguish multifocality from bilaterality, bilaterality is defined as the presence of carcinoma in both thyroid lobes, multifocality means two or more tumors lesion in the thyroid lobes. Gross ETE was regarded as the tumor penetrates through the capsule and invades the subcutaneous soft tissues, esophagus, trachea or recurrent laryngeal nerves (19). According to the 8th edition of TNM staging of TC issued by the AJCC in January 2018, we use 55 years old as the age cut-off value. 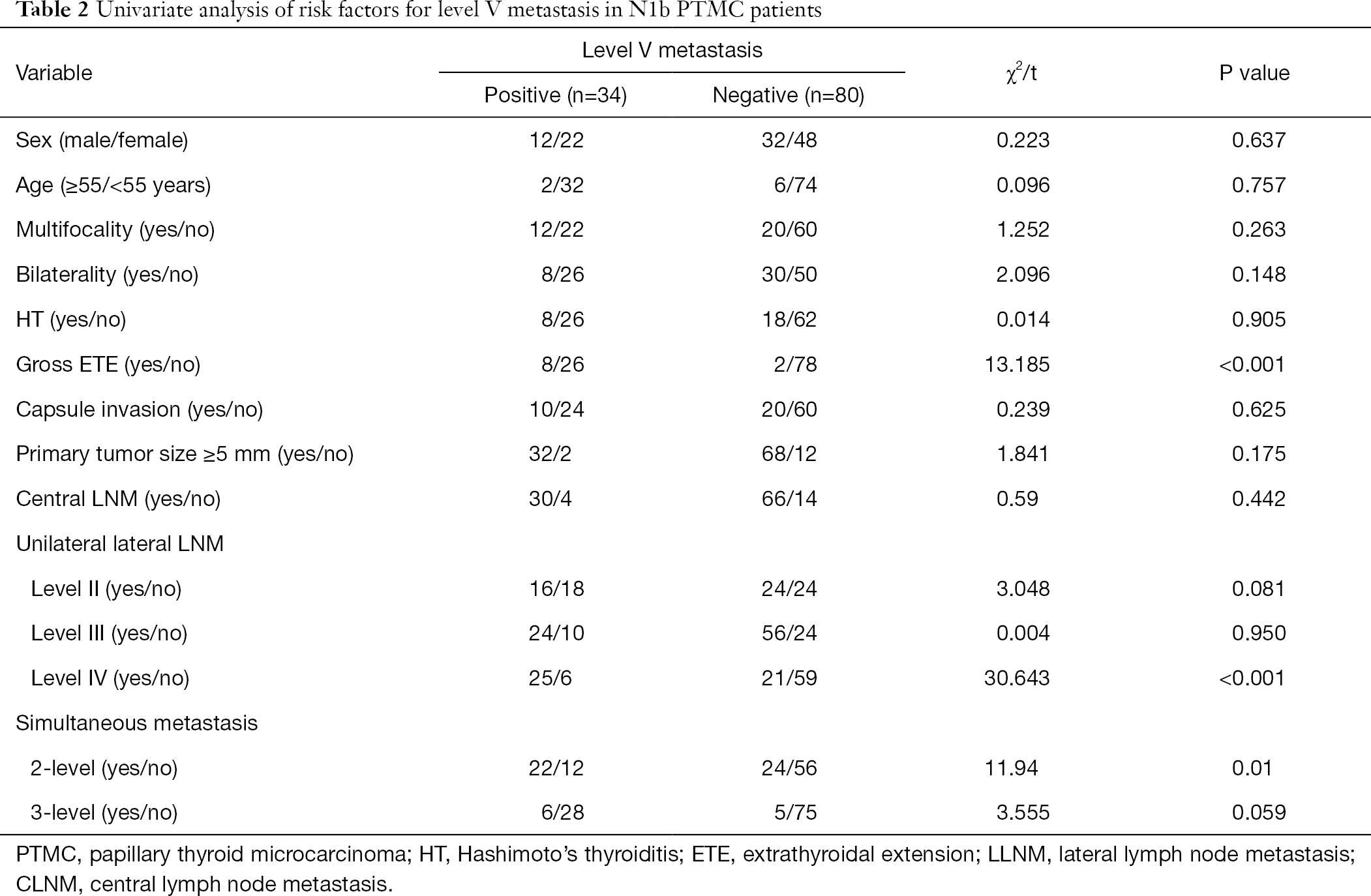 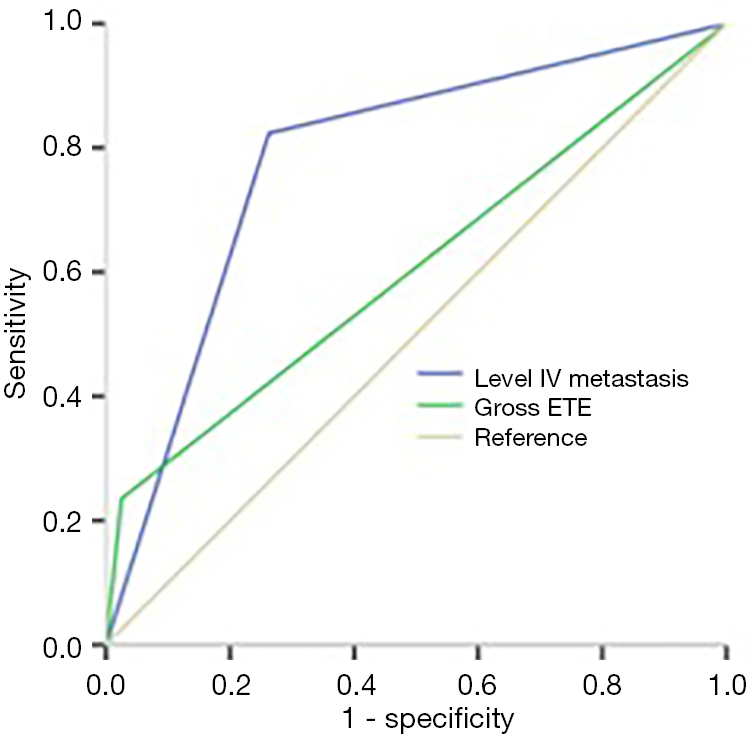 With the development of high-resolution ultrasonography and improved health awareness, the detection incidence and rate of PTMC have greatly increased in the latest decade (8). The majority of PTMCs have an indolent disease course and excellent prognosis, active surveillance of low-risk PTMC patients is suggested as an alternative to surgical treatment to reduce associated postoperative morbidities. Nevertheless, immediate dissection of thyroid and cervical lymph nodes is required for N1b PTMC patients (6). Multiple guidelines recommend therapeutic lateral neck dissection if lateral LNM are confirmed by radiological evaluation or clinical examination (9,20). However, the optimal lateral neck dissection range still have no definitive guidelines, at present, MRND (level II to level V) has been generally accepted. The complications associated with MRND and clinical outcomes have been reported in many studies, but the effects are still debated (21,22). This is partly because of the desire to decrease the associated postoperative morbidities, especially injury for cervical plexus and spinal accessory nerve, and partly because of the lack of enough evidence that lateral LNM impact overall survival. Whether level V dissection should be included in N1b PTMC patients is a challenge for surgeon. Therefore, we designed this study to explore the clinical predictive factors for level V metastasis and attempt to provide a rational management of lateral neck dissection in treatment for N1b PMTC patients.

In our study, the overall and occult rate of level V metastasis were 29.82% (34/114) and 7.02% (8/114), respectively. Which is similar with the findings of previous study (10-12,14,21,23,24), and the overall incidence of lateral LNM in levels II, III and IV were 35.09%, 70.17% and 42.11%, respectively. Level III was the most common regions of lateral LNM, followed by levels IV and II. Therefore, selective neck dissection encompasses levels III–IV was necessary in N1b PTMC patients. Farrag and colleagues (25) retrospective reviewed 53 N1b PTC patients who underwent therapeutic lateral neck dissection and found lateral LNM were most common involved with levels III, II-A, and IV, the extent of lateral neck dissection at least including levels III, II-A, and IV. Another study (21) concluded that routine MRND is not required for all N1b patients as LNM to levels V was uncommon and recommended levels III–IV lymphadenectomy only. Further levels were only to be dissected under the evidence of clinical or radiographical examination. From the above mentioned information, it is no undoubted that lateral neck dissection can be accuracy planned in N1b PTMC patients to address the levels involved.

Our study has some potential limitations. First, this is a single center study. A study based on prospective and multicenter is more powerful and reproducible. Second, the number of patients was not large enough, only 114 patients being ultimately enrolled. A larger population study is needed to further confirm our results. Third, level V nodes were not routinely divided into sublevels Va and Vb. Therefore, we could not analysis the rate of metastasis levels Va and Vb separately. Fourth, our center was not routinely recorded some information in the pathological report, such as lymph nodal size, extra nodal extension, histological subtype and distant metastasis. Fifth, although all patients received regular follow-up, we failed to record all patients’ clinical follow-up data, so we could not precisely calculate the incidence of recurrence and overall survival. Finally, the complications associated with MRND including shoulder syndrome, wound infection, chylous leakage and hemorrhage had not recorded in our medical system. Nevertheless, our study collected data from a single center and used strict inclusion/exclusion criteria that present a reliable and accurate result in the rational management of lateral neck dissection in treatment for N1b PMTC patients.

We would like to thank our patients who allowed us to make this study possible.

Reporting Checklist: The authors have completed the STROBE reporting checklist. Available at http://dx.doi.org/10.21037/gs-20-232

Conflicts of Interest: All authors have completed the ICMJE uniform disclosure form (available at http://dx.doi.org/10.21037/gs-20-232). XL serves as an unpaid associate editor of Gland Surgery from March 2018 to February 2023. The other authors have no conflicts of interest to declare.

Ethical Statement: The authors are accountable for all aspects of the work in ensuring that questions related to the accuracy or integrity of any part of the work are appropriately investigated and resolved The study was conducted in accordance with the Declaration of Helsinki (as revised in 2013). The study was approved by the Ethics Committee of Xiangya Hospital Central South University (No.: 201901006) and informed consent was taken from all the patients.