Over the last 2 decades, internal mammary vessels have been shown to be the best recipients for free flap breast reconstruction (1-4) due to the following reasons: (I) sufficient diameter, (II) proximity to site of anastomosis, (III) sufficient length for flap remodeling, and (IV) remoteness from the local pathological process (5). However, these vessels have the notable drawback of non-accessibility, which, in some cases, outweighs all their advantages. The internal mammary vessels are anatomic structures located inside the thoracic cavity, and this means that, to harvest them, rib resection has to be performed. This can lead to complications such as postoperative pain, tenderness, and contour deformity (6,7).

To overcome this drawback, investigators proposed internal mammary vessel dissection without rib resection through muscle fiber separation (8), partial rib resection (9), or use of perforators (10). These techniques are also associated with high rate of complications such as bleeding, intrathoracic structure damage, inadequate diameter, and lack of anatomical variability (11).

The aim of this study was to develop a minimally invasive surgical technique for the dissection of internal mammary vessels as recipients for breast reconstruction.

We present the following article in accordance with the STROBE reporting checklist. Available at http://dx.doi.org/10.21037/gs-20-104.

A retrospective analysis of prospectively recorded data of patients undergoing microsurgical breast reconstruction at the Clinical Oncological Center of Tatarstan was undertaken.

The indications for microsurgical breast reconstruction are as follows: age of 18–60 years and the feasibility of and indications for mastectomy (TNM stages I to III and patient election). The contraindications for microsurgical breast reconstruction were as follows: TNM stage IV, neoadjuvant chemotherapy, severe general condition of the patient (American Society of Anesthesiologists class >3), previous abdominal surgery, severe concomitant disease affecting vessels (e.g., diabetes and connective tissue disorders), and previous bypass heart surgery (in the case of left-side reconstruction). A specific contraindication for video-assisted thoracoscopic surgery (VATS) is respiratory insufficiency (moderate/severe), which is defined as forced expiratory volume in 1st second (FEV1, determined by spirometry) <80%. None of the patients had pre- or postoperative radiotherapy.

Patient characteristics are summarized in Table 1.

As internal mammary vessels were exclusively used as recipients, they were dissected using a technique of minimally invasive VATS developed in our hospital (12).

In the preoperative period, we performed standard evaluations including assessment of general health status, electrocardiography, mammography, ultrasonographic imaging of the contralateral breast and regional lymph nodes, blood analysis, and urinalysis as well as chest radiography and spirometry with further consultations with internists and anesthesiologists.

For visualization, we used a VATS set manufactured by Störz (Karl Storz, Culver City, CA, USA) consisting of a large screen, an endoscopic camera, 2 video monitors, a xenon light source, a video registration and reproduction system, and a video recorder. The thoracoscope had the following characteristics: diameter of 10 mm and 0° with a 5 mm biopsy channel (“view-only” thoracoscope). Other instruments that were used that are worthy of mention include trocars, thoracoports (5 mm in diameter), electrocautery devices (bipolar and monopolar), endoscissors, and endostaplers (Endomedium, Kazan, Russia).

Surgery is performed under conditions of open pneumothorax, and if adhesions are present, they are dissected using endoscissors with further coagulation. The lung collapses after 2–5 minutes. After examination of the pleural cavity, the parietal pleura is dissected parallel to the vessels from the 4th intercostal space to the 1st intercostal space (Figure 1B). Two clips are placed on the distal end of the vessels, and 1 clip is placed on the proximal end of the vessels (Figure 1C). The vessels are dissected upwards (en bloc with surrounding internal mammary lymph nodes) up to the 2nd intercostal space (Figure 1D). Muscle fibers are separated from the outside (Figure 1E), and the distal ends of the vessels with the lymph nodes are extracted from the chest cavity (Figure 1F). The lymph nodes are sent to the laboratory for pathological examination (i.e., for disease staging), and the vessels are prepared for microsurgical anastomosis (Figure 1G, Video 1). After vessel extraction, thorough check of hemostasis and final lavage with saline are performed, a drainage tube is inserted into the pleural cavity, and the trocars are removed. The anesthesiologist then “switches on” the ipsilateral lung. The cuneiform pillow is removed, and flap harvesting is started.

Finally, microsurgical anastomosis is created between the internal mammary vessels and the donor vessels (with deep inferior epigastric vessels in the vast majority of cases) (Figure 1H, Video 1). The drainage tubes are removed on postoperative day 2 or 3.

Statistical analysis was performed with Epi InfoTM 7.2 (Atlanta, Georgia, USA). Means and SD, as well as frequencies of data of interest were calculated.

The study was approved by the Ethics Committee of Kazan State Medical Academy (ID: Number 10, from 11.11.2008) and was conducted in accordance with the principles of the Declaration of Helsinki and its amendments. All the patients provided written informed consent before participating in the study.

The details of the surgical treatment are presented in Table 2. 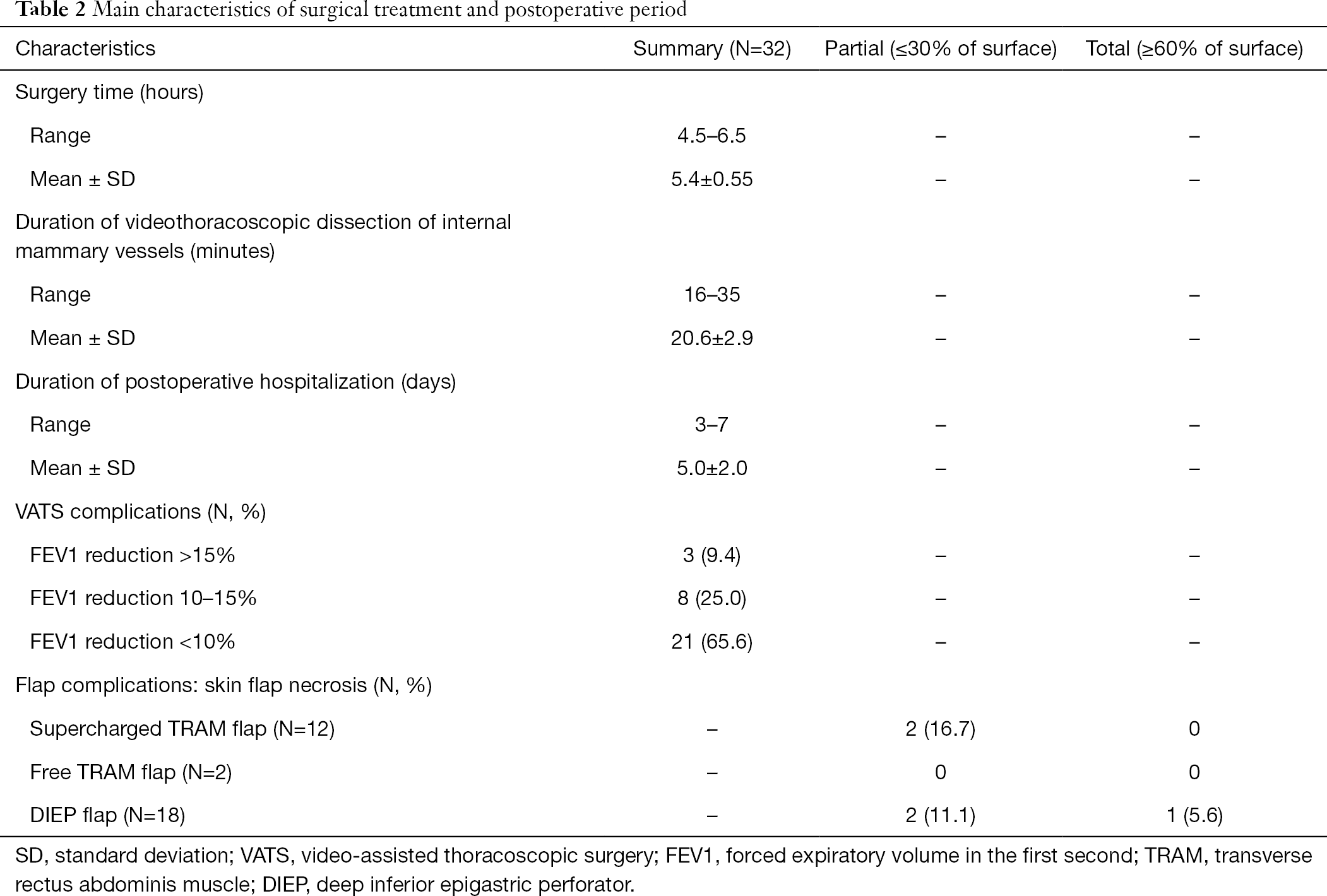 There was 1 case of total necrosis of deep inferior epigastric perforator (DIEP) flap at the beginning of the learning curve when we had not yet quite mastered the microsurgical technique.

The results of DIEP flap reconstruction (at 2 weeks after operation) in a 46-year-old patient are shown in Figure 2.

Endoscopic dissection of internal thoracic vessels is not a new procedure as it is widely performed worldwide for bypass surgeries. As such, the advantages and disadvantages of this procedure as well as the possible postoperative complications have been carefully studied (12,13).

Our technique of endoscopic dissection of internal thoracic vessels is performed using the VATS parasternal lymphadenectomy procedure developed at the Clinical Oncological Center of Tatarstan in 1995 (14). In the “pre-sentinel node” epoch, this procedure was routinely performed along with axillary lymphadenectomy in patients with central-medial breast cancer (15). When this procedure was performed on 1,674 patients in 2010, it was found that the procedure is associated with minimal complications. The highest rate of complications (including worsening of spirometry curves, skin necrosis, and flap necrosis) was observed in the patient group that underwent pedicled TRAM flap reconstruction. The authors explained that this was due to reduced blood supply to the TRAM flap when harvesting the internal mammary vessels. The postoperative decline in FEV1 was explained by the sacrifice of the abdominal muscles and further reconstruction of the abdominal wall under tension (16).

Since 2000, VATS has been included in the residency program of oncological surgeons at the breast cancer department. In the first 2 years of training, young doctors perform the procedure at an average time of 45 minutes, and after 3 years of regularly performing this procedure, the average time of the procedure decreases to 20–30 minutes.

Moreover, for many breast surgeons in many countries whose basic specialty is general surgery, this surgery should be relatively easy to perform since the skills are the same as those of laparoscopic surgery.

Finally, this procedure can be performed in cases where access to the 2nd intercostal space is difficult due to the small (periareolar access) or remote (inframammary access) incision for radical mastectomy.

Endoscopic dissection of internal mammary vessels has drawbacks such as need for special training, unsuitability for patients with respiratory insufficiency, and unfeasibility of using left-side vessels in patients with coronary heart disease who may need bypass surgery.

Endoscopic dissection of internal mammary vessels is a simple and feasible technique with an acceptable learning curve for surgeons, and when performed by experienced surgeons, it is a rather fast procedure with a low rate of complications.

Reporting Checklist: The authors have completed the STROBE reporting checklist. Available at http://dx.doi.org/10.21037/gs-20-104

Conflicts of Interest: All authors have completed the ICMJE uniform disclosure form (available at http://dx.doi.org/10.21037/gs-20-104). The authors have no conflict of interest to declare.

Ethical Statement: The authors are accountable for all aspects of the work in ensuring that questions related to the accuracy or integrity of any part of the work are appropriately investigated and resolved. The study was approved by the Ethics Committee of Kazan State Medical Academy (ID: Number 10, from 11.11.2008) and was conducted in accordance with the principles of the Declaration of Helsinki and its amendments (as revised in 2013). All the patients provided written informed consent before participating in the study.